We Break Down That 'Mrs. Maisel' Bar Mitzvah Episode – Kveller
Skip to Content Skip to Footer

We Break Down That ‘Mrs. Maisel’ Bar Mitzvah Episode 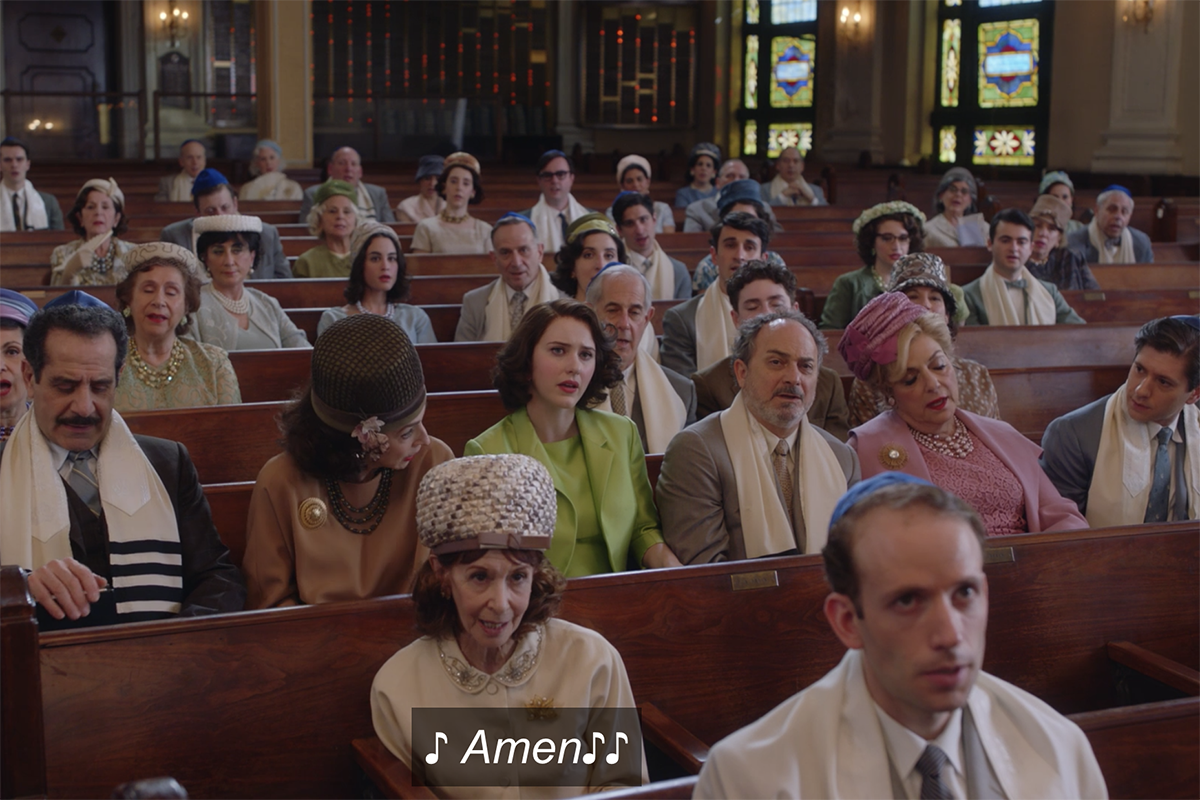 “The Marvelous Mrs. Maisel” is one of the most Jewish shows on TV. In its first three seasons, it gave us a bris, a Yom Kippur episode, visits to the Catskills and mouth-watering Jewish deli orders. So it was only a matter of time before we got our “Maisel” bar mitzvah episode.

Since the show announced that its next season, season five, would be its last, we now know that we will never get to the bar or bat mitzvah of young Ethan or Esther Maisel, who will not turn 13 by the end of the show’s run, and therefore we will not get to see the Maisels freak out about organizing an opulent party themselves. Instead, in the third episode of “The Marvelous Mrs. Maisel” season four, which is currently airing, we see the bar mitzvah of a mysterious kid with no clear relation to the Maisel family — and it’s wonderfully chaotic and delightful.

We’re here to break down that episode, and all its many Jewish references, for you.

The episode, which also ushers in the return of beloved Jewish comedian Lenny Bruce and Jason Alexander as Abe’s friend Asher Friedman, features the Jewish rite of passage at the Maisels’ and Weissmans’ synagogue.

Early in the episode, we find out that Moishe Maisel, Midge’s former father-in-law played by Kevin Pollack, has gotten invited to make an aliyah — chant the Torah prayers on the bimah — at a boy’s bar mitzvah. It’s a great honor. The catch? Moishe has no idea who the boy, Akiva, is.

“You must have encountered him at some point, we know him from the Catskills,” Rose, Midge’s mother, tells Moishe when he visits their Upper West Side apartment.

“It’s a short list of people you pick to make an aliyah at your service. You’d think you’d pick someone who knows who the fuck you are,” Moishe replies emphatically.

“Akiva Bergman, it doesn’t ring a bell?” he later asks his grandson Ethan, who won’t shed light on the issue.

Later in the episode, we see the bar mitzvah itself at Temple Shearith Israel. Temple Shearith Israel is an actual temple in New York’s Upper West Side — the oldest synagogue in America — but the temple, also known as the Spanish Portuguese temple, is Sephardi, while the Maisels and Weissmans are Ashkenazi. (The synagogue scenes in “Maisel” are actually filmed at the East Midwood Jewish Center in Midwood, Brooklyn, far from Manhattan where the Maisels reside.) 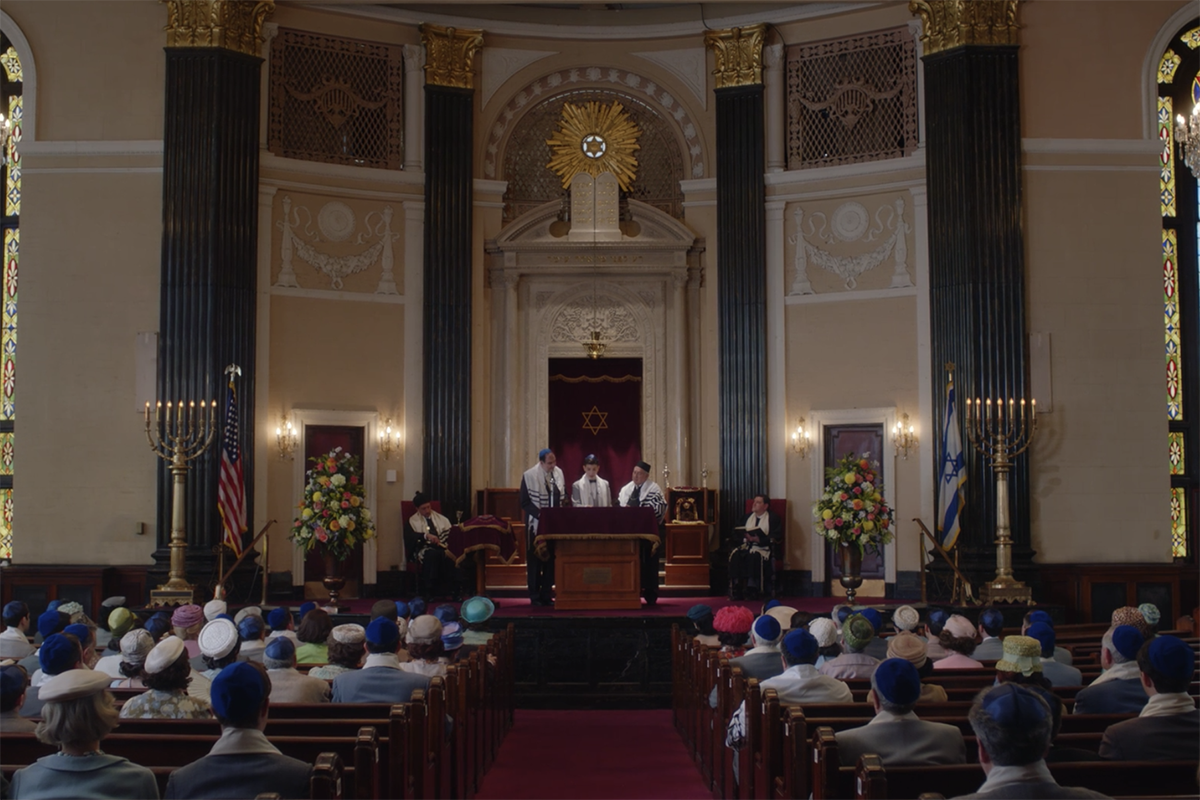 The scene at the synagogue opens with some beautiful chanting from Akiva Bergman, played by gifted young actor Joshua Turchin.

“Shomer ha’brit vehachesed le’ohavaiv vu’leshomrei mitzvotav l’elef dor,” Akiva gorgeously chants, a passage from Deuteronomy that includes Moses’ words to the Jewish people, reminding them that God rewards those who do good and punishes those who do ill by him — which is pertinent for the remainder of the episode.

The translation for these two biblical lines, according to Sefaria, is, “Know, therefore, that only your God is God, the steadfast God who keeps the divine covenant faithfully to the thousandth generation of those who love [God] and keep the divine commandments, destruction those who reject [God]—never slow with those who reject, but requiting them instantly.”

As this chanting happens, Rose notices that she and Abe are getting some serious glares and cold shoulders from the other congregants at the synagogue. Meanwhile, Rabbi Huebsche, played by Stuart Zagnit, ushers in the final aliyah, saying, “We now call for the final aliyah, David Ben-Dasan ya’amod maftir.” 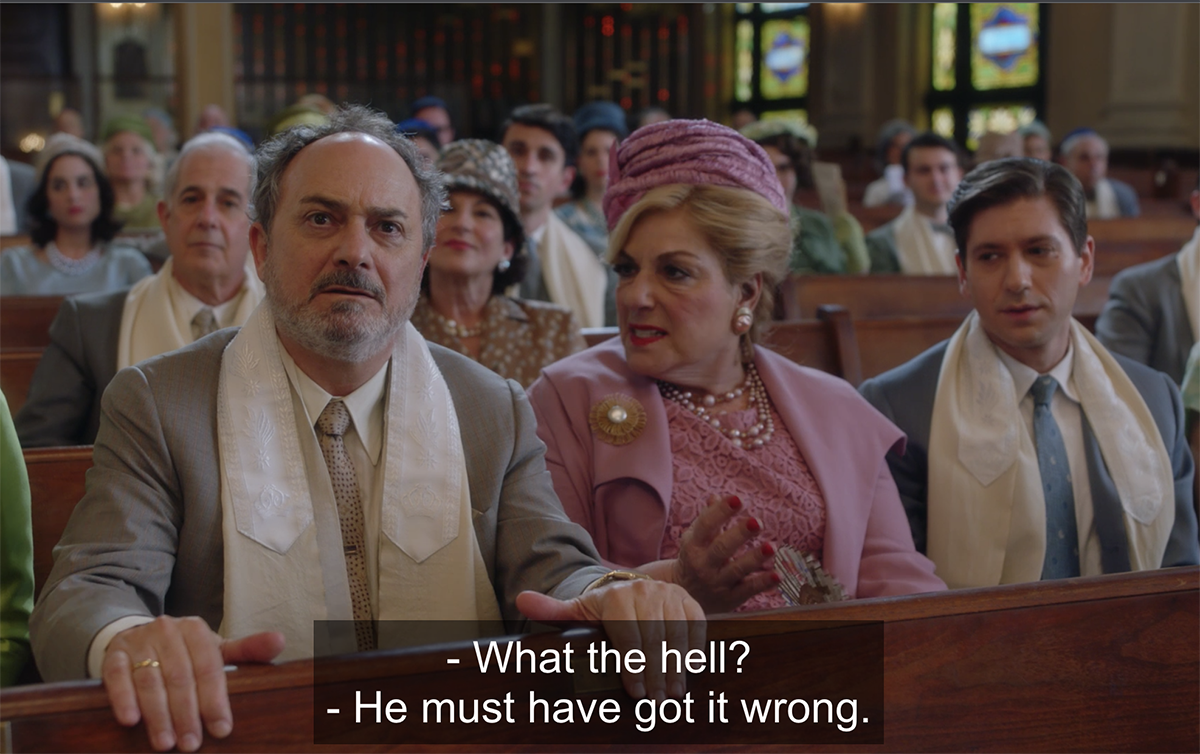 We instantly realize that is not Moishe’s Hebrew name, and Moishe realizes he’s been snubbed. Akiva’s mom makes her way to him in the synagogue and apologizes for the crossed signals, chalking it up to the fact that Akiva is a mumbler (even though he sounds super confident on that stage!).

As this happens, the rabbi keeps looking at Abe angrily along with the rest of the congregation.

When the chanting ends, Rabbi Huebsche congratulates Akiva for a job well done and asks him to interpret, in one word, what the portion was about.

When Akiva says “bravery,” the rabbi replies, “Bravery is very interesting and very noble, but is it as important as loyalty?” He pointedly he glares at Abe again.

Confused at this derailment of his important coming-of-age ceremony, Akiva tries to get back on topic by mentioning the bravery of his Uncle Saul who “helped liberate the Jews of Auschwitz and now owns three restaurants, one of them dine-in.”

It’s all useless, because the entire synagogue is absolutely furious with Abe, and then his crime is revealed — well, at least revealed to him. Because we knew all along that as the newly minted Village Voice theater columnist, Abe has drawn the ire of his Jewish community for brutally panning a fellow congregant’s Broadway play in the previous episode.

“Your husband killed his show, wrote terrible things about it in that fakakta paper of his,” yells a woman from the balcony, where she stands among new mothers with their babies.

“I wrote what I saw,” Abe tries to defend himself, as another congregant loudly calls him a “schmuck” – perhaps the worse Yiddish curse of all.

After Abe says that he owed his readers an honest review, and tries to draw the attention back to the ceremony, Rabbi Huebsche goes for the (Holocaust-related) jugular: “What’s more important, Abraham, your public or your people? We escaped the jaws of Hitler for this?”

Fellow congregant Pauly, played by the wonderful Saul Rubinek, then starts a biblical debate (this is a synagogue after all): “Abe Weissman, you stood there, sipping champagne… toasting buzz, all while holding the knife of Cain behind your back,” he accuses.

Instead of defending himself against the accusation, Abe maintains that “there’s nothing in the bible indicating that Cain killed Abel with a knife.” Oh, Abe.

“Yes, there is, the book of Genesis, Cain killed Abel, it’s implied that it was with a knife,” Pauly maintains.

Abe then asks the angry rabbi for his two cents, who admits that “the Torah said Abel was a worker of the ground.” 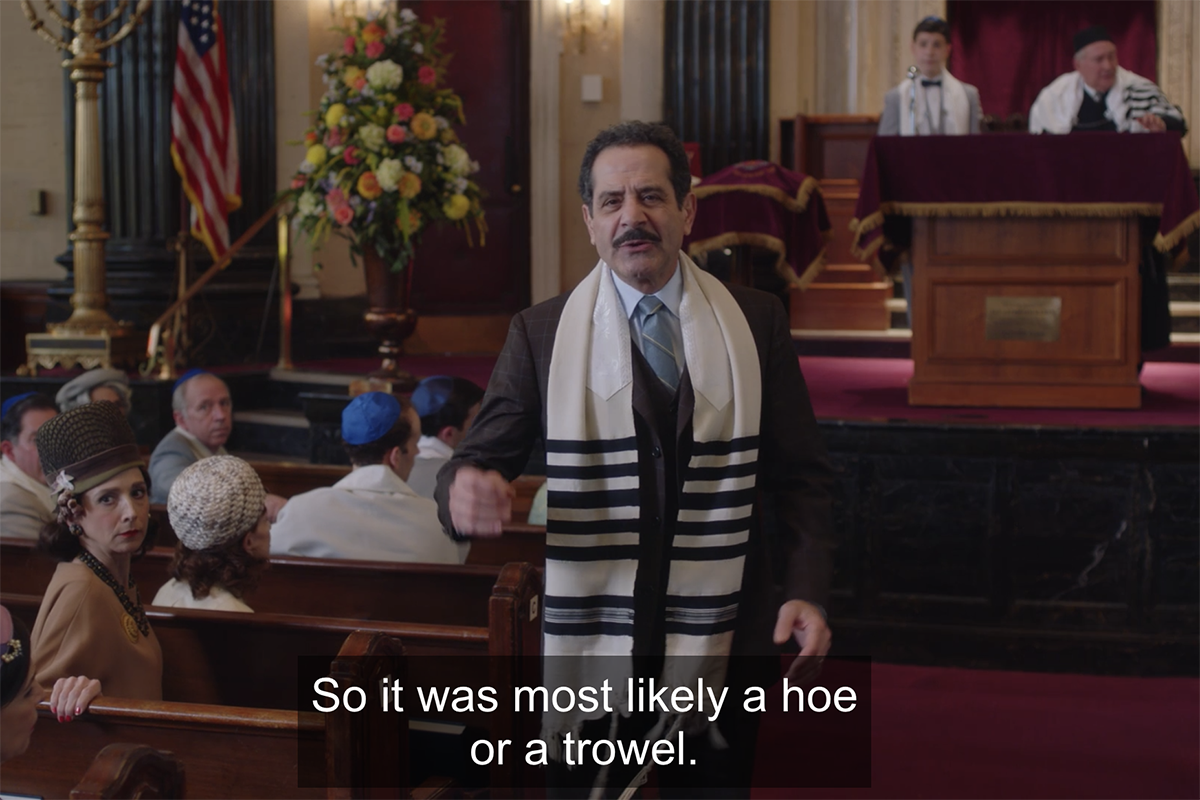 “Exactly, so it was most likely a hoe or a trowel,” Abe replies. “He didn’t carry a knife.” (For the record, we don’t know for sure what Cain killed Abel with, but some scholars posit that it was a stone.)

“You ruined the show,” yells the woman from the balcony, “and now you ruined poor Akiva’s bar mitzvah.”

“No offense, but there were a lot of problems with your invite list, kid,” says Moishe, finally getting to say his piece.

The fury at the synagogue continues, and Abe eventually realizes that he can’t win this fight, so he agrees to make his exit, admitting, “I am a distraction and apparently an enemy of the people.”

But before he leaves the synagogue, perhaps never to return, he makes one final, dramatic remark: “There is something that you all need to know before we move forward: You are the frog, I am the scorpion. I sting because it is in my nature,” making a reference to a Russian folk tale as he swooshes out of the room.

And so, from dramatic exits, copious amounts of Yiddish, excellent chanting of prayers and Hebrew pronunciation, scandalous mentions of the Holocaust, a synagogue feud and references to Genesis and Deuteronomy, this bar mitzvah episode truly has it all.

Is it the best bar/bat mitzvah episode of all time? We won’t argue that, but well done, “Maisel” team, for reaching and acing this important Jewish show rite of passage.