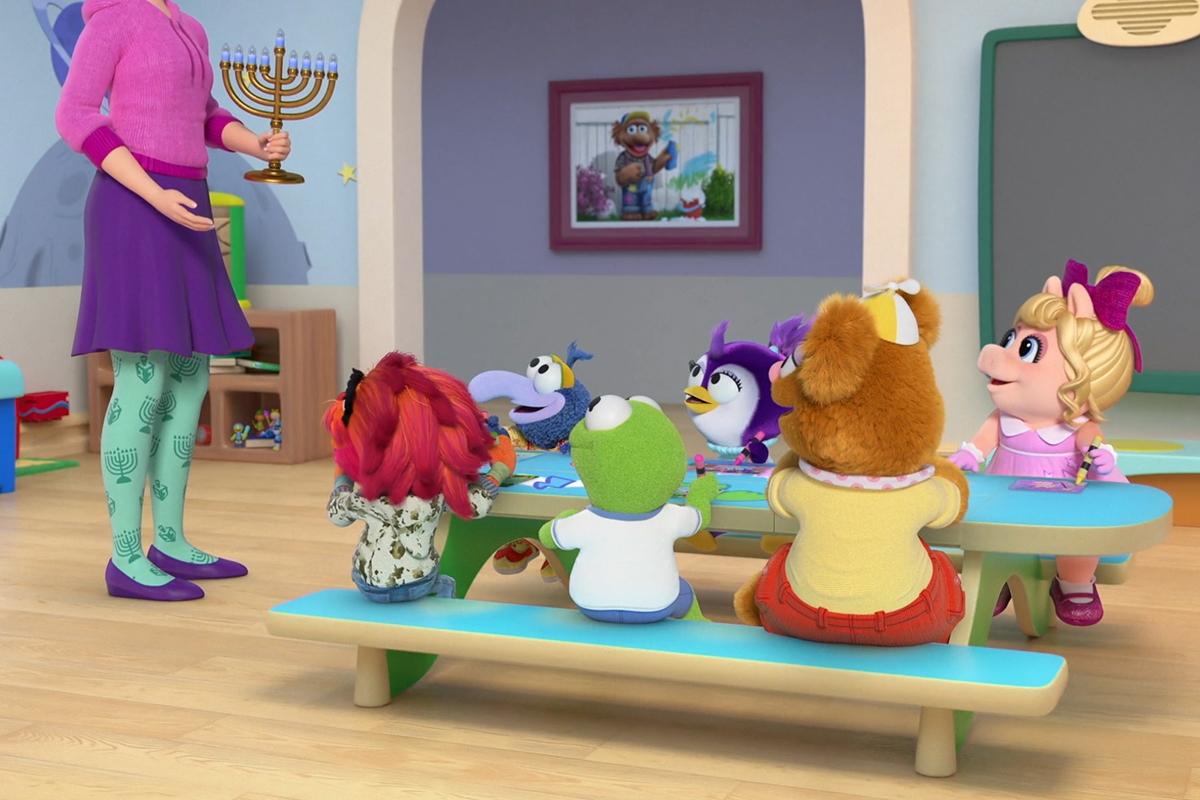 “Muppet Babies,” the computer-animated reboot of the animated series from the ’80s, premieres a new Hanukkah episode on November 28 at 9:00 a.m. on Disney Junior. Those who grew up watching the ’80s cartoon may be delighted to learn that Miss Nanny (known simply as Nanny in the original version), the caretaker of the Muppet babies, is Jewish. She is voiced by Jewish actress and comedian Jenny Slate.

The show, like the original, features younger versions of beloved Muppets like Kermit, Miss Piggy, Fozzie Bear, Gonzo, and Animal. There is also a new penguin Muppet named Summer. What’s great about this episode, entitled “A Mitzvah for Miss Nanny,” is the level of detail when it comes to Jewish customs.

In this exclusive clip, premiering on Kveller today, Miss Nanny takes out a chanukiah and teaches the Muppets what Hanukkah is and that there are lots of ways to celebrate, including doing mitzvahs:

Miss Nanny explains that mitzvahs are good deeds that you do to help someone else. We’ve seen plenty of Hanukkah episodes that talk about traditional ways to celebrate, like eating latkes and playing dreidel. This one includes that, too, but we love that the writers took the opportunity to teach about mitzvahs — which aren’t strictly a Hanukkah concept, but are an important part of Judaism.

Another great touch is Miss Nanny’s tights. Since the show is from a child’s perspective, we only see the bottom half of Miss Nanny, so her green tights are prominently featured, with different patterns depending on the episode (another update from the original stripes). In this one, she sports festive tights with menorahs and dreidels. Someone should take this idea and mass produce these, because we’d definitely buy them.

Miss Nanny’s family is traveling, so she can’t spend the holiday with them. The kids feel bad that she is separated from her family and plan to cheer her up by doing mitzvahs for her like throwing a surprise Hanukkah party. They all have different tasks — for example, Bunsen and Beaker put their science skills to good use to make scientifically perfect chocolate gelt.

Miss Piggy decides her mitzvah will be to make Miss Nanny a special frame for her family photo, but she keeps getting distracted when her friends ask for help with their mitzvahs. Miss Piggy is so busy helping her friends that she doesn’t end up finishing the photo frame. But Miss Nanny is still happy with the gift, pointing out that she had actually been doing mitzvahs all day. It’s nice to see that even someone like Miss Piggy, who is often focused on moi, can put others above herself.

The episode also features two songs, and both are bops. One, a rock song inviting the whole neighborhood to the Hanukkah party, is so catchy that even the notoriously difficult-to-please Mr. Statler and Mr. Waldorf get into it. The other is a song about mitzvahs, with a klezmer sound rooted in Jewish musical tradition.

There are no mentions of Christmas in this episode, something that’s becoming more common with Hanukkah episodes. Now that so many shows are nailing the Hanukkah episode, maybe next they can try the same approach for lesser-known Jewish holidays, like Rosh Hashanah — or maybe even Tu Bishvat? But in the meantime, happy Hanukkah!