The Passover Story Is a Meaningful Metaphor For Childbirth 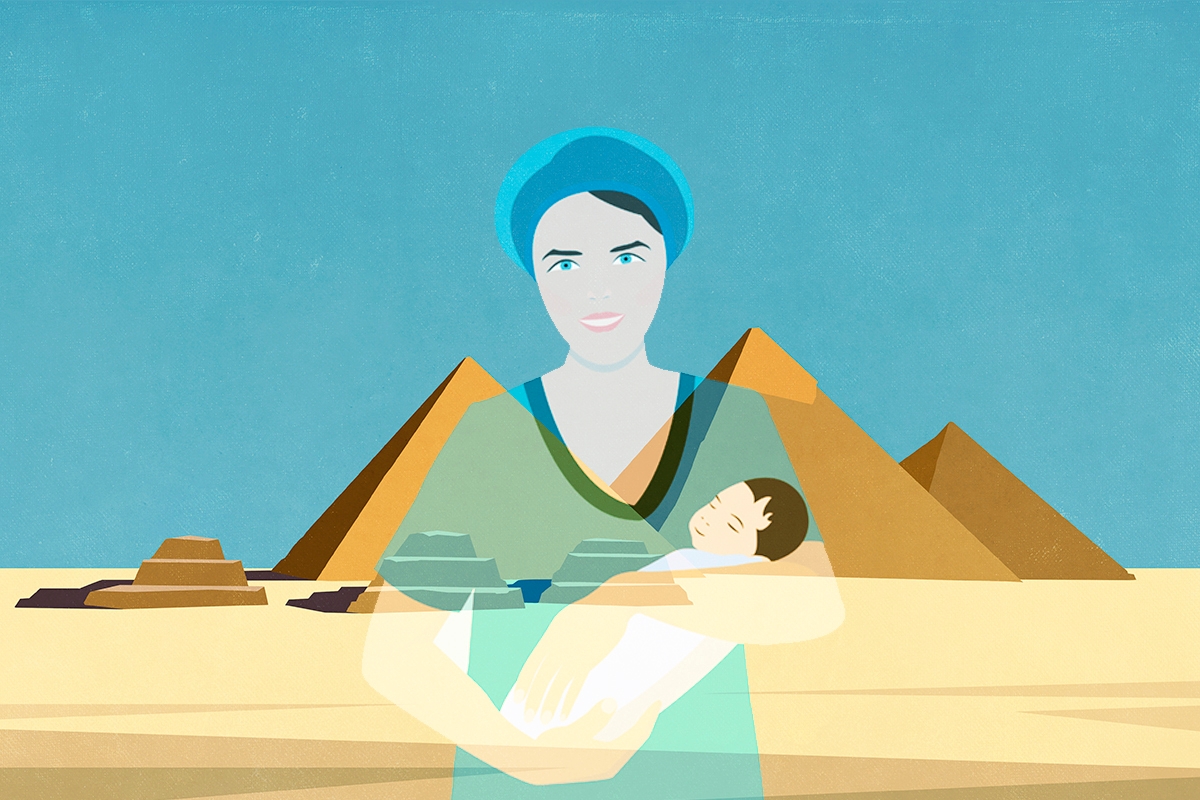 It’s 2:00 AM. My two-day-old daughter is screaming in my arms. Tears are running down my face; exhausted, I try again and again to get her to latch onto my breast.

What can possibly describe the mixture of fear, pain, joy, trauma, and hope that is early parenthood? From pregnancy, through labor and childbirth, then into those first disorienting months of a child’s life, the entrance into parenthood is a singular and often isolating experience.

Which is why, over the past few weeks, I have been captivated by an idea that the exodus from Egypt is a near-perfect metaphor for childbirth.

As a graduate of Maharat, an Orthodox women’s rabbinic ordination program, I am used to spending my days steeped in the rich world of Torah. Recently, I have begun to immerse myself in another world: I recently completed my training as a birth doula, a trained support person who guides birthing people and their loved ones through labor. I see this training as a continuation of what brought me to the rabbinate. It is one more way that I can offer comfort to people in a moment of deep need, vulnerability, and great joy. And I have found meaning in the moments when these two worlds of mine — Torah and birth — collide.

The exodus is the story of the Jewish people leaving slavery in Egypt — Mitzrayim in Hebrew, which is sometimes translated as “the narrow place.” They leave by way of the Red Sea, which splits to allow the new Jewish nation to emerge safely into the freedom of the world. This all screams of birth imagery: the confinement of the womb, the splitting of the waters, the journey through a narrow path to finally emerge, reborn, as free people.

Then comes the wandering in the desert, which also serves as a metaphor for the postpartum period: disorientation, the desire to return to the womb. The Jewish people infamously complain as they wander, repeatedly bemoaning the life they left behind and asking Moses why he had made them leave (Exodus 14:11-12 and 16:3) — just like a newborn’s “fourth trimester” when, as parents, we try to mimic the environment of the womb as much as possible.

Fascinatingly, there is also breast milk in the story of the Jewish people’s birth. During the years of wandering the desert, God provides manna as needed —  a white, fatty substance that takes on different tastes and forms depending on the people’s wants and needs. In the Torah, the Jewish people complain of five foods they miss from Egypt: onions, leeks, garlic, cucumbers, and melon. The midrash tells us that the manna, which otherwise can taste like anything the people want, does not taste like these five foods because they are the very foods that a nursing mother was instructed not to eat for fear that they were bad for the baby.

So if manna is breast milk, and the Jewish people are a newborn baby, that, of course, makes God a nursing mother. There is incredible power in this image of a breasted, maternal God so centrally placed in our Jewish story. But that’s not all: If the role of the nursing mother is played by God, what does this tell us about the weight, the expectations, and the responsibilities that are required of a human nursing mother? After all, we see throughout the story how God struggles to keep the Jewish people alive, to get them to stop crying long enough to eat what they need to survive. Anyone who has parented a newborn baby can relate to the fear and anxiety that accompanies that responsibility. It is a superhuman feat.

Of course, new mothers are not God. We are humans — tired, overwhelmed, run through with hormones and feelings of inadequacy. And so, I am also struck by the role of the Jewish people’s other parent during this “postpartum” period: Moses, our guide and teacher.

Immediately following the people’s complaint about the manna not tasting how they want, the Jewish people surround Moses, all crying at the openings of their tents. And we see Moses fall into a somewhat rare role. Instead of being the advocate for the Jewish people, we instead see him turn to God and say: “Why have You dealt ill with Your servant, and why have I not enjoyed Your favor, that You have laid the burden of all this people upon me? Am I the one who conceived this people, who bore them, that you should say to me nurse them?”

Moses is asking the question so many parents find themselves asking in the foggy hours of those early weeks: What have I done wrong to make this so hard? Moses then continues: “I cannot carry all this people by myself, it is too much for me. If You would deal thus with me, kill me instead, I beg You, and let me see no more of my wretchedness!”

What is this if not a piercing and all-too real image of postpartum anxiety and depression? Of the overwhelming pain of a crying baby in the middle of the night, whom you can’t seem to comfort, who won’t latch or eat and you don’t know why? I felt these same feelings in my own living room, crying as my baby screamed, begging her and begging God to please just show me what I was supposed to do.

The more I think about this metaphor of the exodus from Egypt as a birth, of those days in the desert as an infant people (and a parent God) figuring out how to survive together, the more I’m convinced this is not a fanciful interpretation but p’shat, a literal and simple reading of the text. After all, birth can be beautiful. Our children certainly are. My kids — who are 3 and 1 —  are the light of my life, my own personal Land of Milk and Honey. But in reading the story of our people’s birth, followed by the wandering of the postpartum period, I find an invitation to speak of the pain, of the fear, of the brokenness, and, yes, even of that dark desire to return to what life was before.

The truth is, this has never been easy. There is no model of a seamless transition into parenthood. Our people wandered the desert for 40 years, not knowing where they were going or when they would get there. The one thing that got them through this time is the same thing new parents cling to in those long, exhausting nights: faith. Faith that babies do eventually turn into children who sleep through the night. That one day we will have time to brush our own hair again. That our bodies are more than just the source of another human’s food. That there will come a time when we will be more overwhelmed by the joys of parenthood than the exhaustion. It feels impossible, it’s hard to imagine when we are in the midst of the wandering, but we’ve been in the desert before and eventually, together, we know we will find our way out.