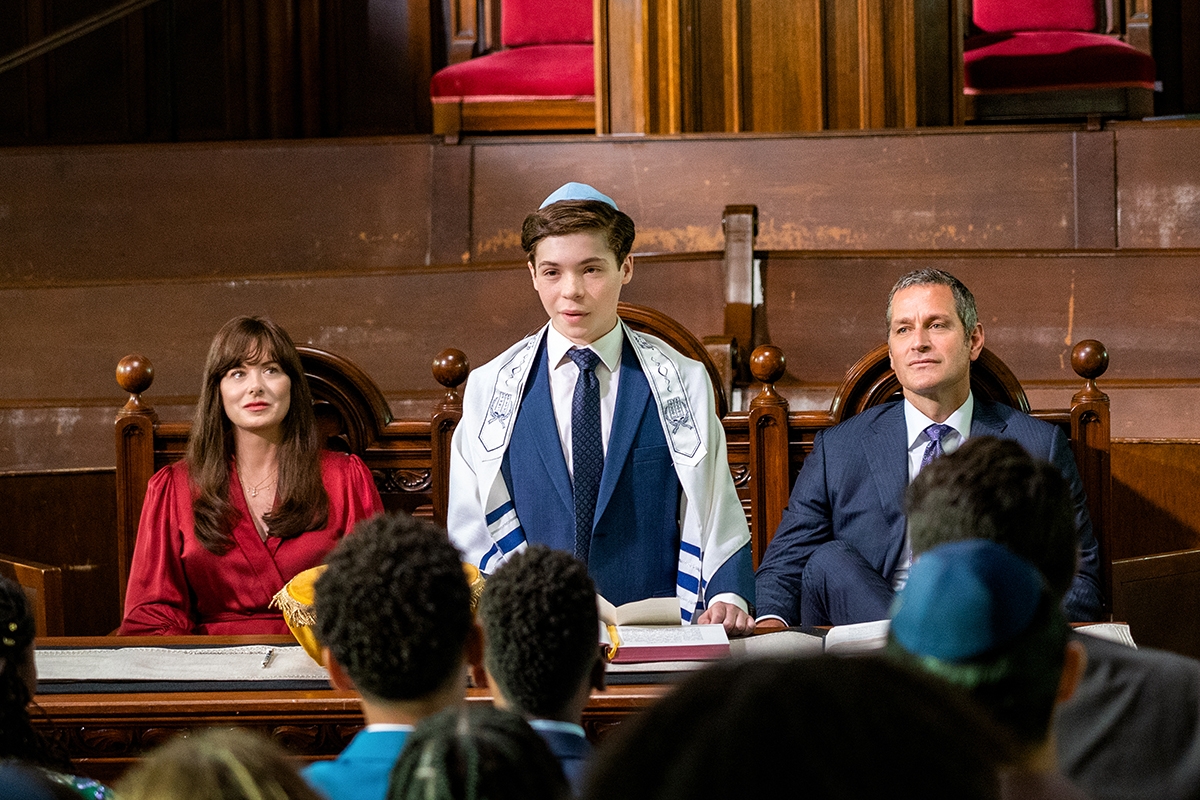 13 The Musical. (L to R) Rhea Perlman as Ruth, Debra Messing as Jessica, Eli Golden as Evan, Peter Hermann as Joel, Josh Peck as the Rabbi in 13 The Musical. (Markfield/Netflix)

Eli Golden is an utter delight. I already feel this as I watch him beautifully sing his heart out as the star of Netflix’s new bar mitzvah musical “13: The Musical,” in which he plays bar mitzvah boy Evan Goldman. And I feel it later when I interview him about his role on Zoom. He smiles, shakes his head and jokes about Hanukkah — he’s got charm for miles.

His favorite musicals are “Hadestown,” “Pippin,” “Hamilton” and “Dear Evan Hansen.” He was the only Jewish teen in the movie’s young cohort of stars, and was overwhelmed by how talented and experienced they all were. They all got “super, super close” filming together in Canada. His favorite song in the movie is “Bad Bad News,” sung by super talented co-star Nolan Ramon — “[he] just kills it.”

Unlike Evan Goldman, a bar mitzvah boy who has to move his coming of age party from ritzy New York to a small town after his parents’ divorce, Golden’s Jewish journey did not include a bar mitzvah — though an onscreen one is undoubtedly the pivotal moment in his career. In a way, this is his acting coming of age: Starring in a Netflix movie at 14 is, after all, nothing to scoff about.

Golden says it took him three weeks to learn the Hebrew part of Evan’s haftorah — not quite the traditional prep time for a bar mitzvah boy, but impressive nonetheless for a movie line. The part that he chants is from Isaiah 42, a line that Rabbi Shapiro, played by Josh Peck, also recites in Hebrew, subsequently sharing an abbreviated English translation — “Hashem who created the heavens gives a soul to the people and a spirit to all who walk upon it ”

Golden says he had both his hometown rabbis in New York and the rabbi working on set explain the Torah portion to him: “It’s very, very beautiful.”

Did filming a bar mitzvah cause FOMO? Golden concedes that he does kind of wish he’d had a big party. I ask about a theme. “It would have to be something funny,” he tells me, and would have to have a disco ball. Finally, he lands on it — an ’80s bar mitzvah.

One thing is for sure: Josh Peck was Golden’s ideal bar mitzvah officiant and co-star. “He is one of the all-time favorites for me — I’ve been watching him since ‘Drake and Josh,'” Golden says. “So when I heard that he was coming on, I was so excited.”

Golden was scared to approach his idol, but he tells me that after spending time together, he can confirm that Peck is a true mensch — “he’s so so so so down to earth, and he puts everything in front of himself. He’s so selfless.”

“It was really awesome to be working with him because he’s so funny as well,” Golden adds.

Golden is just as effusive about Debra Messing, who plays his Jewish mom in the film: “When you say Debra Messing everyone goes, ‘Oh, yeah, Debra Messing, she’s good at what she does,'” he says. “It was so honoring and… just a pleasure to work with her. ”

Golden may not have had a bar mitzvah, but he has so much love for being Jewish. He loves the holidays, the culture and “the community that I happen to be in.”

His favorite holiday is  Hanukkah: “I’m just saying for everybody watching — it is better than Christmas. I mean, potato latkes — come on! What gets better than that? Not a whole lot!” 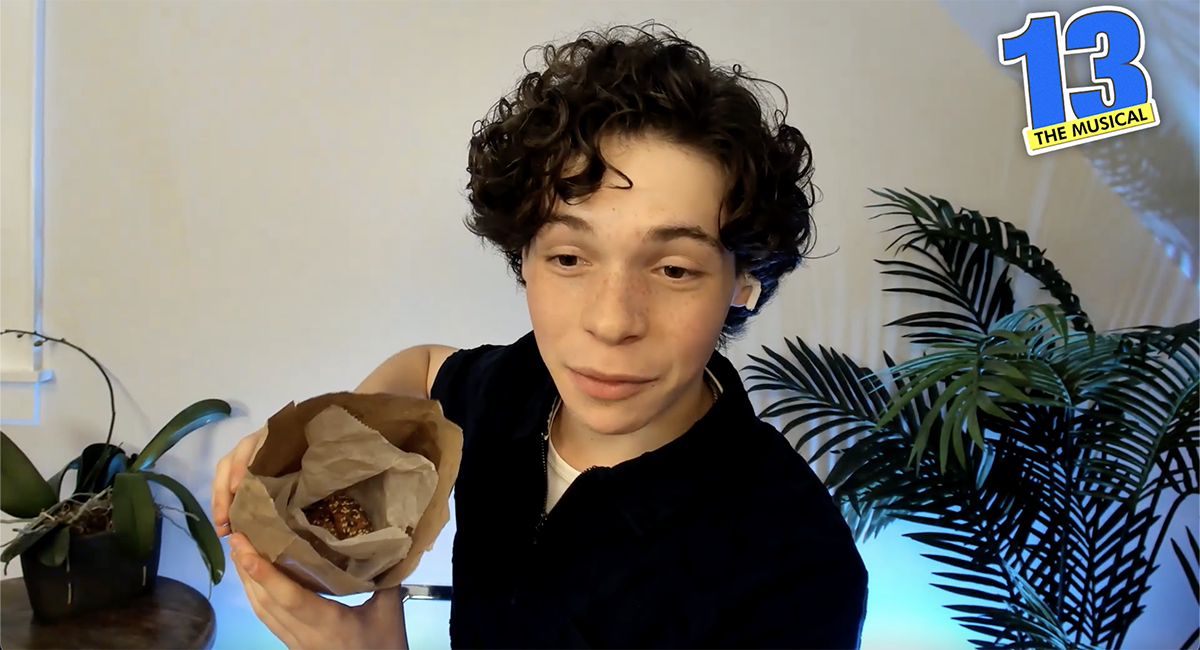 Eli Golden showing us his bagel

Unlike his co-star, Debra Messing, who is not a fan of the brined salmon bagel topping, Golden is firmly team lox — “[it] goes with anything.”

I ask him for his advice for future b’nai mitzvah’s. “Stick with it,” he says earnestly. “If it’s important to you, do it, because it’s worth it — it’s so worth it… And if you don’t want to do it, don’t do it. Do what makes you happy.”

Ultimately, Golden says, “I’m so happy I got to represent the Jews.”

“When I was growing up, I never watched a Hanukkah movie. I’ve only watched Christmas movies, and I never really got that [representation]. So I’m so happy I get to be someone who can do that.”