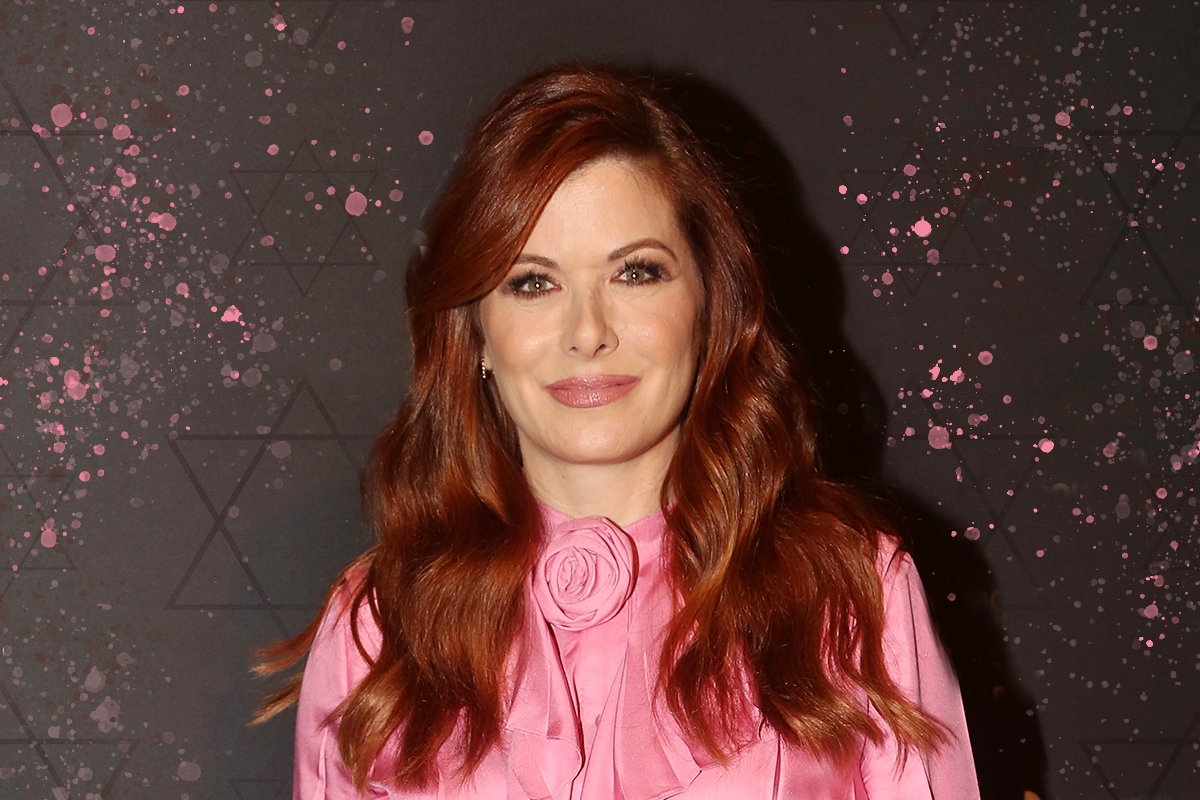 I can’t help but tell Debra Messing how much I love her chai necklace.

I may not have a lot of time to interview one of my favorite Jewish actresses (I’m totally cool about it!) about her role in Netflix’s new bar mitzvah movie, “13: The Musical,” in which she plays the mother of the bar mitzvah boy (man!), but letting a beautiful piece of Judaica go uncomplimented goes against my core values.

Messing looks absolutely stunning for this Zoom presser in a striped red shirt and bright red blazer that bring out her famous crimson locks, and the Jewish necklace perfectly compliments her outfit. (I, on the other hand, wore a Mickey Mouse shirt, something I may or may not internally cringe about for the rest of my life.)

She smiles and then excitedly exclaims “chai!” as she brings it close to the camera, showing me the two letters that mean life. If I hadn’t already been won over by watching her on my TV for decades, this would have done it.

The chai necklace is not an anomaly: Debra Messing is all about that Jewish pride. She rapturously retold the story of Passover in Saturday Night Seder and often shares family holiday adventures on Instagram. The Jewish mom of one has been politically outspoken and fierce on social media for years — and she’s never shy about bringing up Jewish issues, from anti-semitic attacks to Holocaust education.

Debra Messing also gave us a Jewish TV icon in “Will & Grace’s” Grace Adler.  It was Messing who insisted on making her character Jewish, adding details of her upbringing and experiences to the role. “I said, want you to write jokes about Camp Ramah, and I want you to make jokes about being Jewish — because it’s representation.”

“Will & Grace” is a historic show for the way it changed America’s perception of gay people, but for my awkward Jewish teen self, interior designer Grace Adler was, indeed, representation. I loved this funny, successful, Jewish woman’s chutzpah, the fierce love she had for her best friends and the biting banter between her and her onscreen mom Debbie Reynolds. Despite her lack of luck in love, I kind of wanted to be her.

Messing as Grace also brought us an unapologetically Jewish beauty ideal with her big iconic red hair (those curls are perfection) and signature style (no matter what Karen says.) The actress was once told that she needed plastic surgery because “her nose is ruining my movie” by director Alfonso Arau — “My nose and I have come this far, and like Barbra Streisand, I’m defiantly keeping it,” she said in a 2017 interview. She still brings that beauty to the screen now, all these decades (oof) later.

Through the years, I’ve chased every TV show and movie that had a dose of Messing. So I was thrilled to find her playing a fully-formed, complex and, yes, still a bit overbearing Jewish mom character in this new film.

Messing says that it was the nuanced Jewish representation that drew her to “13: The Musical”: “I loved that it was a story about a Jewish family,” Messing tells me. “I felt like it would have been very easy to go straight to the [Jewish mother] stereotypes and get right back to the kids singing.”

In the musical, Messing plays Jessica Goldman  (nee Weiss), the recently-divorced mother of the protagonist, soon-to-be bar mitzvah boy Evan Goldman. Jessica moves herself and her child into back to her small and not-at-all Jewish hometown in the midst of his bar mitzvah prep. The two stay with Jessica’s Jewish mother Ruth (played by the delightful Rhea Perlman). Watching Jessica grapple with both parenting her child in this new situation and finding her footing after spending all her years as a stay-at-home mom will definitely feel familiar to many parents who had to give up a part of themselves to raise their children. 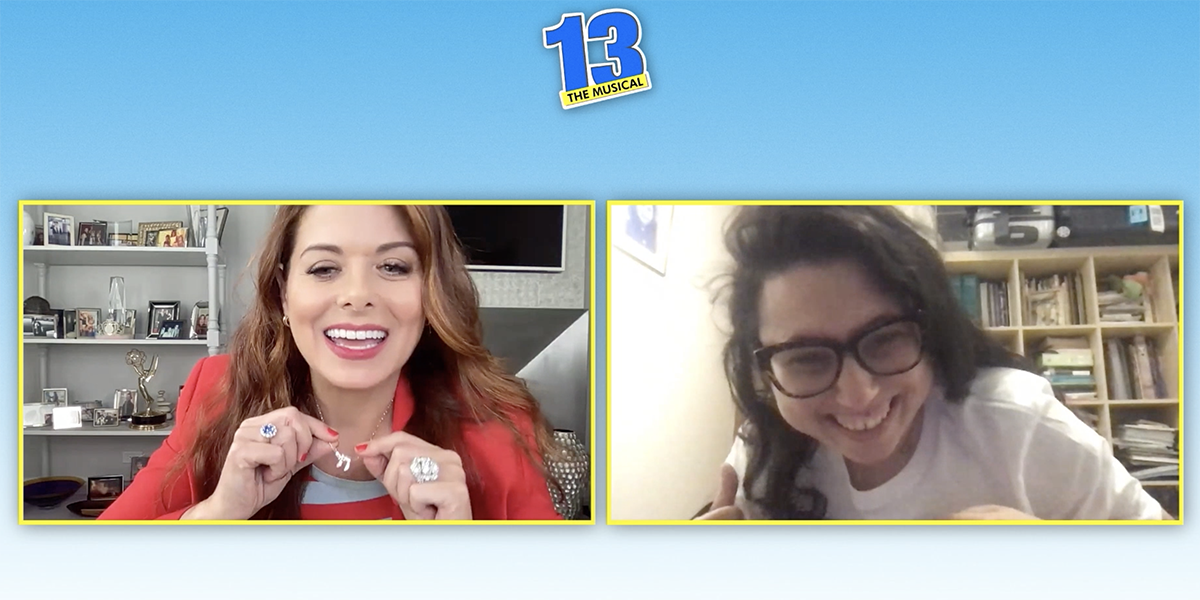 Most of the Jewish characters in the film — Josh Peck as Rabbi Shapiro, Eli Golden who plays Evan, Messing and Perlman — are Jewish. I asked Messing about authentic casting: Does she believe that it’s imperative for Jewish actors to play Jewish characters? Her answers were nuanced. “I appreciated that they used Jewish actors,” Messing says about the movie, but she added, “I also understand the desire for casting to be blind.”

Still, Messing says she’s “seen so many non-Jewish people play a Jewish comic part over the years” inauthentically. “If everyone involved is Jewish, there’s going to be an authenticity, even to the jokes, even to the rhythm of the jokes, and it felt meaningful to me,” she professes.

Messing wasn’t always able to showcase her Jewish pride. Though she grew up in a very Jewish home — “My father was president of the temple when I was growing up and president of the Jewish Federation of Rhode Island, and my mother was vice president, so every day, there were conversations about how to raise money for Jewish causes” — her family moved when she was 3 years old from the Jewish epicenter of Brooklyn to Rhode Island. Like the movie’s central family, Messing found herself without many other Jews around in her new hometown: In Rhode Island, she was one of three Jewish kids in her entire community.

“So I really identified with Evan,” she says about the movie’s protagonist, whose main concern is finding his social footing in his new town, “because I know what it’s like, to grow up feeling other and feeling like you want to fit in but you don’t know how [and] feeling misunderstood.”

There were times when Messing tried to deny that otherness — “I tried to hide that I was Jewish. One such moment came after a group of kids yelled at her for being away from school for Yom Kippur. “They’re like, ‘Well, why do you get Christmas off?'” Messing recalls. “Anything that makes you stand out is threatening, and so, from that point on, when people said, ‘Where were you,’ I’d say, ‘Oh, I was sick’ and I wouldn’t reference it.”

Messing remembers her own bat mitzvah very clearly. Her entire family came from Brooklyn and Richmond, New York to attend, along with her entire sixth-grade friends.

Like any kid, Messing recalls “being worried that I was going to make a mistake,” but “also, strangely enough, I felt worried that all my friends in my class who came would just want to leave — that they would get bored. As a 12-year-old, you don’t want to be responsible for that.”

Like Evan’s, it wasn’t an extravagant affair. “The big highlight of the reception was that my father’s best friend surprised us and dressed up as Elvis.”

The actual event went off without a hitch, and Messing’s memories from it are joyous — “I remember… being put the chair and being lifted and, and feeling very, very happy to see my parents so happy .” She says she later understood that the Jewish rite of passage was “really more about an excuse for you to get together with your family.”

The movie’s bar mitzvah also includes a particularly diverting Jewish moment, in which Jessica’s ex bring her a peace offering in the form of a fresh bagel from Zabar’s (not the bagel purveyors I would have chosen, but to each his own.) While Messing does concur “there’s nothing better than a hot everything bagel,” she is, unfortunately, allergic to whitefish and doesn’t love lox. Instead, her most beloved Jewish noshes include pierogis from Veselka and Temp Tee whipped cream cheese on matzah. 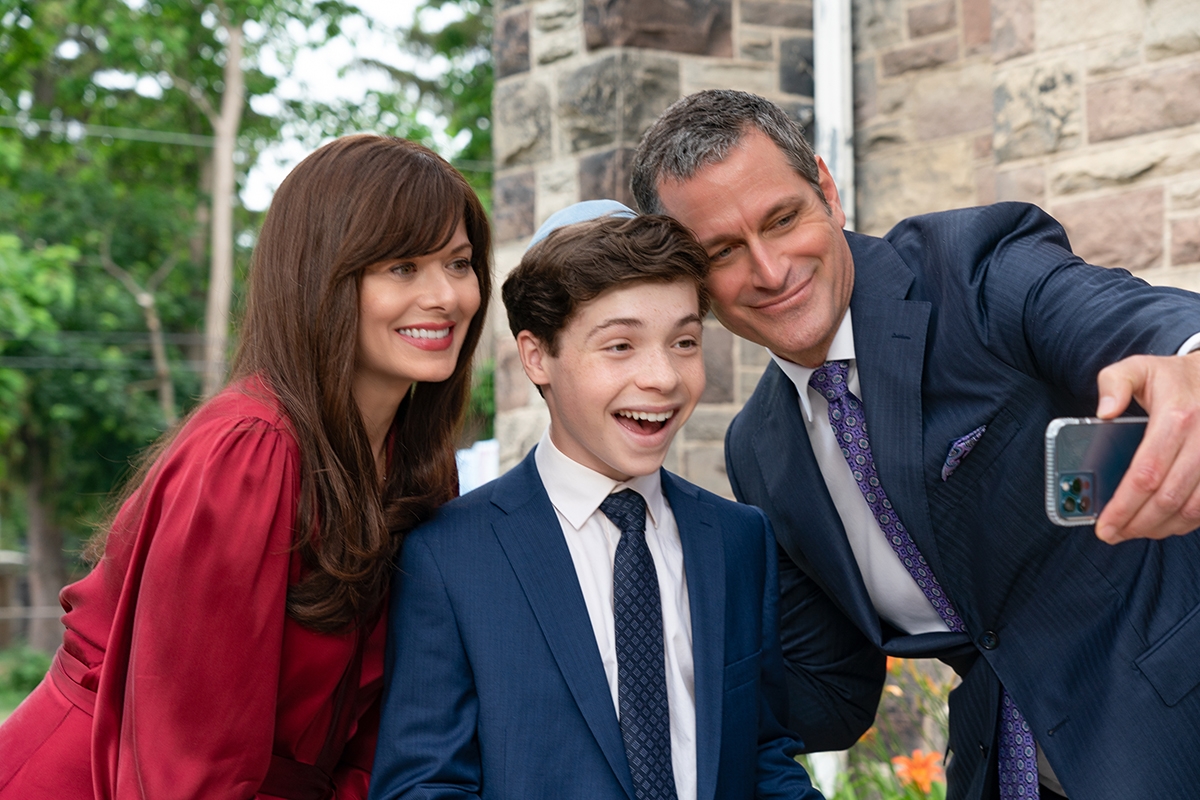 (L to R) Debra Messing as Jessica, Eli Golden as Evan, Peter Hermann as Joel in “13: The Musical” (Alan Markfield/Netflix)

But her favorite Jewish food is her mother’s chicken soup: “You know, of course, everyone feels like their mother’s was the best in the world. But my mom’s really was.” (In case you’re wondering, her mother served said soup with both matzah balls and noodles.)

Messing is ultimately glad she gets to show a Netflix audience this important Jewish rite of passage: “This is the first time that a Jewish kid has to perform, and they have to do it alone.”

Messing definitely nailed the emotional truth of being Jewish mom at a bar mitzvah — many Jewish moms of teens are due for an intense feeling of deja vu as they watch her barely hold it together during Evan’s bar mitzvah. Her own son, Roman, turned 18 this year, and she posted some very moving pictures from his prom. Those bar mitzvah scenes definitely brought some recent parenting memories to the fore for her.

“Helping [Evan] with his tie and saying to him, “You’re a man,” and crying — I had that exact moment several times with my son as he grew older and older,” she says. The movie reminded her of “having to face time passing, having to face the fact that this little boy who was always right there needs to separate, and how difficult that is.”

The way Evan made fun of his mother when she got a little verklempt on his special day was also intensely familiar — “that’s what my son did to me when I started crying over the fact that he was a man.”

For the actual actor who played her son, there was nothing embarrassing about sharing these moments with Messing. “I learned something from her every single scene I did with her — she is so good,” Golden, who plays Evan Goldman in the movie, told me. “It was such an honor to work with her.”

Messing’s emotions all caught up to her during the shooting of that final bar mitzvah scene, in which Evan has his bar mitzvah and recites his haftorah, and the kids all sing a final song. “I could not stop crying. First of all, just having all of them look at me and singing their hearts out… I just could not get over it… For hours, every time they sang, I cried,” she says.

She was also struck by the Jewish significance of actually showing the coming-of-age ceremony on screen. “I never saw the Broadway show [that the movie is based on.] So when I was reading it, I was like, ‘Oh, the movie will be over before the bar mitzvah.’ And the fact that you see it? The fact that [Evan]’s speaking Hebrew in the temple — it just felt important, especially today, with the rise in antisemitic attacks.

“Sitting on the bimah — it felt really, really meaningful to me.”