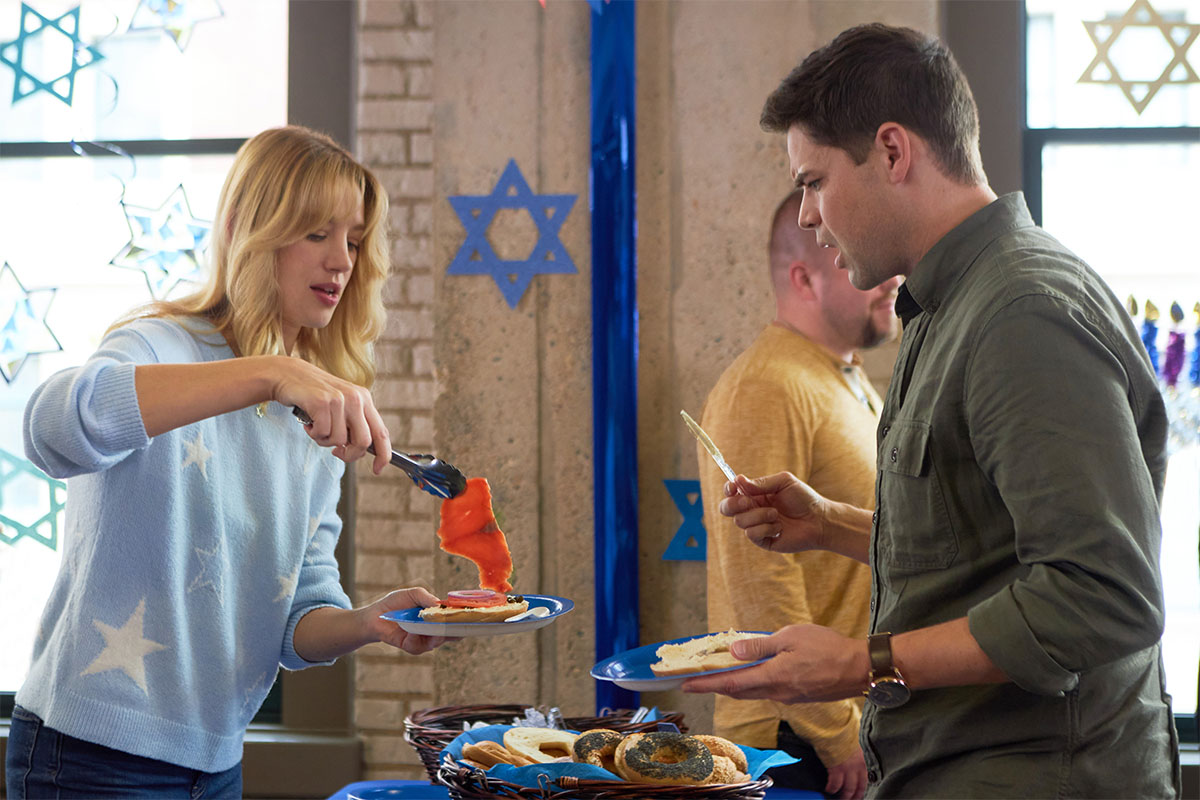 I adore “Hanukkah on Rye,” Hallmark’s first truly great Hanukkah movie. When I first watched the movie, about two Jews (played by the wonderful Yael Grobglas and Jeremy Jordan) whose families own delis on opposite coasts — and who fall in love with the aid of a Mary Poppins-esque Jewish matchmaker — I just knew that the person who wrote this script had to be Jewish.

I was right. Julie Sherman Wolfe is Jewish, and was preparing for her son’s bar mitzvah as she wrote the script, which perfectly marries Jewish rom-com culture — like “Crossing Delancey” and Nora Ephron’s “You’ve Got Mail” — with the schmaltzy and deeply American tradition of the Hallmark holiday movie. (Schmaltz adds great flavor to life — especially in a movie about delis.)

Wolfe is a Hallmark veteran — she’s written over 20 movies for the channel, including quite a few Christmas ones, like “A Holiday Spectacular” and “One Royal Holiday.”

Kveller caught up with the writer over e-mail to find out how her own Jewish family influenced the script, where the deli inspiration for the movie came from, and what other Jewish holidays she’d like to see Hallmark tackle next.

This interview has been lightly condensed and edited for clarity.

As someone who’s written a lot of Christmas movies, what did it feel like to finally write a Hanukkah one?

I’ve got such naches, of course! We had an unbelievably talented cast and crew for this project. The entire process has been a joy, and it’s one of the absolute highlights of my career. I’ve had a very “all-in” year with Judaism… I was writing the script at the same time as my son was preparing for his bar mitzvah. I couldn’t be prouder of the movie (and of my kid, of course! Or else what kind of Jewish mother would I be?).

Could you tell me a little bit about how this movie came to be?

I was spending a lot of time in NYC researching and filming “A Holiday Spectacular” and decided that while I was there, it was my duty as a Nice Jewish Girl to go to as many old-school Jewish delis as possible (the closest one to me in Connecticut is Rein’s Deli, which I adore, but it’s a bit of a drive!). At the same time, Liz Yost (SVP, Original Programming and a dear friend) asked if I had a Hanukkah movie idea for this year (she knew I was dying to do one but was waiting for inspiration to strike). We ended up chatting about our mutual love for Jewish delis, and the journey both our families took (from Poland and Russia) to come to the United States in the late 19th/early 20th centuries. I also went to the Tenement Museum and saw first-hand the grim conditions so many Jewish immigrants endured once they arrived.

I just needed to find a way to put it all together. That’s when Liz sent me an incredible letter written by her grandmother Bessie, about her own journey to Ellis Island on the S.S. Rotterdam in 1914. Bessie wrote about making friends her age on the ship, and that was the missing piece to the puzzle (and where the “twist” at the end came from!). Our family histories were merged together and became the heart and soul of “Hanukkah on Rye.” It was a special, once-in-a-lifetime project for both of us.

Can you tell me a little bit about your Jewish background? It seems like a lot of your family history made it into this movie, judging from your Twitter!

The “West Coast” Jewish deli aspect came from my mom’s side of the family, who came to San Francisco straight from Europe in 1871 (pre-Panama Canal) on a ship that went around Cape Horn (a VERY rough journey if you’ve seen some of the “Drake’s Passage” videos of late). The rest of my family came through Ellis Island from Poland and Russia, right around 1900. No actual deli owners in the family, but they had the same work ethic and desire to find success in America! (Speaking of family history, I found out this week that my great-great-grandmother Nellie Young’s maiden name was WOLF… after which I frantically paid for access to one of those ancestry websites to make sure I wasn’t distantly related to my husband. We’re in the clear.)

There has been a lot of criticism about Jewish holiday movie representation on Hallmark in the past. Were you privy to that? Did that put any additional pressure on you for this project, and how did you deal with that?

I wanted to write a Hanukkah movie that wasn’t “explaining” Hanukkah or Judaism to anyone – just like we never explain Christmas or Christianity in a Christmas movie! The only “educational” aspect was really about the tenements and the “why” behind the influx of Jewish immigrants at the turn of the 20th century. Anything that promotes more understanding between cultures is a win in my book.

The network was so supportive, I felt the opposite of pressure – I was free to make this movie as Jewish as possible and was never given limits as to what was or wasn’t “kosher,” if you will. The reality is, no matter what we do, someone’s going to be unhappy – whether it’s “too Jewish” or “not Jewish enough.” All I can do is write what’s authentic to my own experience… and remind myself to never read the comments.

What are some of your favorite Jewish references and anecdotes in the movie — any moments you were particularly excited to see come alive?

Two that come to mind first: The “bagel topping” scene is basically verbatim from a conversation I had with my husband probably 20 years ago. We still fight about the proper order of toppings.

Digging out the menorah candle wax with a walnut pick? Let’s just say my family and I literally played rock-paper-scissors last night to decide who got to do it. It’s the less gross (but equally satisfying) equivalent of those “ear wax removal” videos on TikTok.

And… I probably shouldn’t admit this, but the “Hanukkah song to the tune of Rudolph the Red Nosed Reindeer” referenced in the movie was something I wrote with my cousin when we were 12. We called it “Reuben the Red-Head Rabbi” and… let’s never speak of it again.

It was fantastic (and makes a big difference!) to have so many people around (not only our Jewish actors but our Jewish producers, network executives and crew) who understand the intangibles of Jewish life (and humor) on a personal level. I’d never say that only Jewish people can portray Jewish people on film and TV. But when it happens, they do bring a deeper understanding of the culture into the role.

Are there any other Jewish holidays or traditions you wish could be explored in a Hallmark/romance movie?

I would love to do something involving a Passover seder – all the family dynamics of Thanksgiving, but with plagues.

Anything else you’d like us to know about “Hanukkah on Rye?”

Peter DeLuise did a fantastic job directing our incredible cast. Peter’s not Jewish, but he is Italian. So, he gets it.