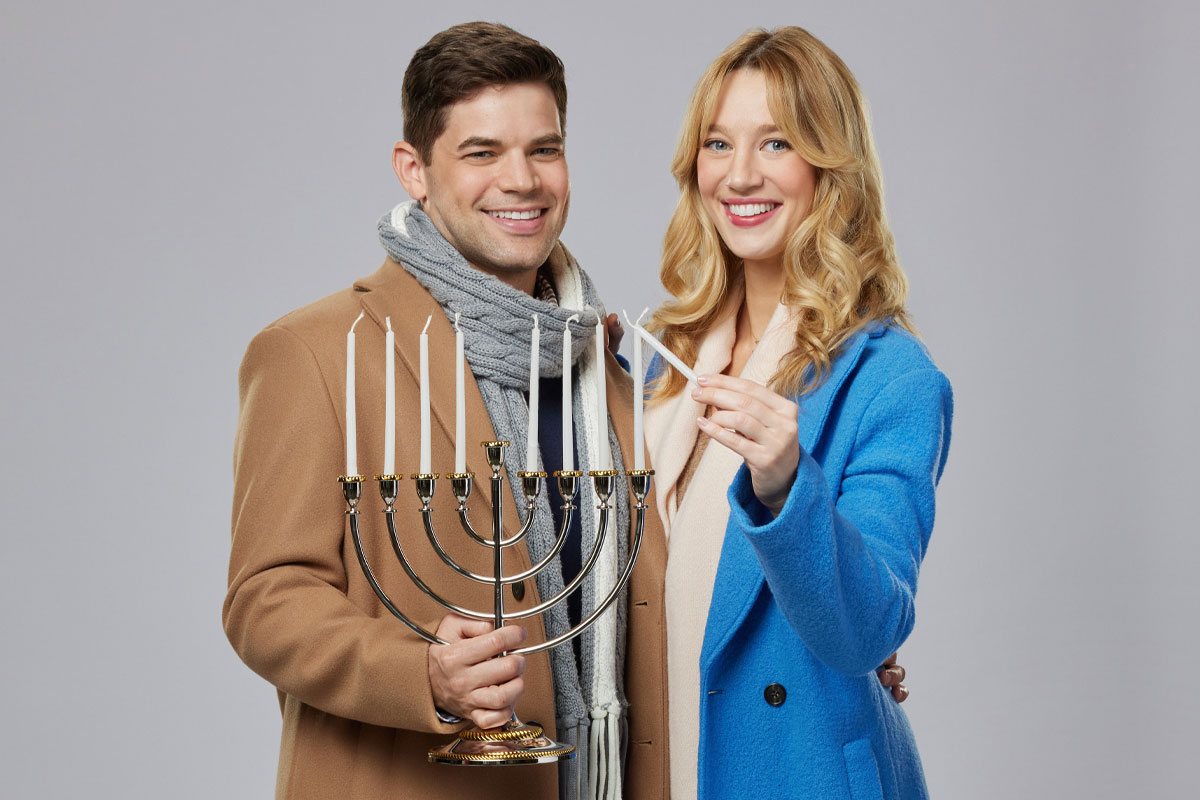 Hallmark has become synonymous with Christmas romance movies. This year, the channel released a whopping 40 of these tried and true holiday flicks. Only one of those 40 happens to be a Hanukkah movie — but it’s the best one Hallmark has aired since it first started making Hanukkah movies an annual part of its lineup in 2019. “Hanukkah on Rye” premiered Sunday night, the first night of Hanukkah — already a good start, since Hanukkah programming doesn’t always coincide with the actual holiday, even with eight nights to get it right.

Past years’ Hallmark Hanukkah offerings were about romances between a Christian and Jewish character, like 2012’s “Hitched For The Holidays,” the first Hallmark movie to include Hanukkah. While interfaith couples should also be represented, these movies are usually condescending in the ways the characters teach each other about their holidays. In 2020, Hallmark strayed slightly from that formula with “Love, Lights, Hanukkah!” about a woman who takes a DNA test and finds out she’s Jewish, so she wants to learn everything about Hanukkah. But that one too seemed aimed more at a Christian audience, with all the over-explaining of the Festival of Lights.

Last year’s “Eight Gifts of Hanukkah” was on the right track: both of the main characters were Jewish, and Jake Epstein always elevates TV movies with his superpower of having chemistry with all his co-stars (he’s done a lot of these of both the Hanukkah and Christmas variety). It had plenty of Yiddish-isms and other authentic touches, but it still placed too much importance on Hanukkah with the characters having a big Hanukkah dinner every night, as opposed to the more common experience of maybe one big family dinner and then feeling accomplished if you remember to light the candles on the rest of the eight nights. It also featured a lot of Hanukkah activities, like an Easter egg hunt but for gelt and a fancy ball, so even though the movie hardly mentioned Christmas, it still felt like it was trying to give Hanukkah equal importance as Christmas and similar traditions.

But “Hanukkah on Rye” isn’t about Hanukkah as a Jewish Christmas, and the Jewish elements expand beyond just the one holiday. In this Jewish version of “You’ve Got Mail” (the film’s writer, Julie Sherman Wolfe, said on Twitter that she wanted to call the movie “Jew’ve Got Mail,” but was shot down), Molly (played by French-Israeli actress Yael Grobglas, whose layered performance as Petra on “Jane the Virgin” turned her from a villain to one of the most complex characters on the show) is getting ready to take over her family’s deli, Gilbert’s, on the Lower East Side of New York City. The movie even starts with Molly’s grandma Ruth teaching her how to make a proper egg cream.

Jacob (played by musical theater leading man and former “Supergirl” sidekick Jeremy Jordan) is also heir to a deli, Zimmer’s in California. When he heads to New York to open a new location of his family business, he meets Molly in the lobby of his temporary apartment building, where her family has lived since they first came to America.

Meanwhile, both Jacob’s and Molly’s grandmothers sign their grandkids up with a Jewish matchmaker who has a 100% success rate and who does everything the old-fashioned way, so the matches have to write each other handwritten letters and can’t share any identifying information. Jacob and Molly are matched together, but write to each other using the aliases David and Beth.

If you’ve seen “You’ve Got Mail” (or “The Shop Around the Corner” or “She Loves Me” or “In the Good Old Summertime”), you can guess where this is going. Sure, it’s awfully convenient that a matchmaker would match you up with someone you already know and they would look like Jordan and Grobglas, but there’s a reason the concept has worked so many times. When characters get to know each other through letters, they can be honest with each other and audiences can watch their relationship grow as they get to know each other on a deeper level. Plus, who doesn’t love a good enemies to lovers story?

Because it’s about Jewish deli owners, the Hanukkah aspects are mostly related to Hanukkah food, which makes sense, as it’s literally their business. Gilbert’s is famous for its latkes and customers line up every year for them — believable in New York where people line up for all sorts of foods. And there are other Jewish foods that aren’t holiday specific, like pastrami and bagels and lox, including a scene in which Molly and Jacob explain their idea of the perfect way to arrange bagel toppings. The best part is you actually see characters eating and enjoying the food — because it’s so frustrating to watch characters with plates of food in front of them and never touching it.

Admittedly, there are Hanukkah activities in this movie, too, but they’re about drumming up business for Gilbert’s, which has been struggling with rent hikes, so they don’t feel forced into the story. There is a sufganiyot-making class and a song contest for a new Hanukkah song because let’s face it, Hanukkah could use some more, complete with a guest appearance by Lisa Loeb. (One of the few things to criticize about the movie is it’s a shanda, a word used twice in the movie, that Jeremy Jordan doesn’t sing.) When the characters are celebrating at home outside the deli, it also feels realistic, like when Molly says it looks like wax has been building up in the menorah for 10 years or when Jacob lights his menorah and you see him doing that trick of melting a little wax at the bottom of the candle so that it stays put in the menorah.

There’s a scene in the movie in which Jacob meets his grandmother in the lobby of a hotel when she visits New York. She says, “Can you believe this lobby? I mean, where’s the Hanukkah? And I’m not just talking about some courtesy menorah behind the desk.” That’s how most of the previous Hallmark Hanukkah movies felt — like a courtesy gesture with no meaning or thought behind it.

The reason the movie feels more genuine could be that writer Julie Sherman Wolfe took inspiration from her own family history. In her live tweets (@shermwolfe) during the movie, she wrote that Molly’s last name in the movie, Spiegelman, is the oldest family name her family traced back to on her mom’s side, dating back from Mazowieckie, Poland in 1743. She also wrote that her great-great-grandmother’s name was Surah and it was changed to Sara at Ellis Island, another detail used in the movie for Jacob’s great-grandmother’s story.

So much of the movie is about the history of Jewish immigrants in the United States. In one of the best scenes, Molly shows Jacob one of the first tenement buildings and explains how they used to be overcrowded and unsanitary, but people stayed because it was still better than what they endured in their home countries. “We weren’t supposed to last but we did,” she says, which is especially powerful for both Jews and non-Jews to hear when there is so much antisemitism and ignorance in this country.

This history also leads to a rich conflict between Jacob and Molly. His family wanted a new life with new traditions. The concept of Zimmer’s is that they serve food from all cultures. Molly says, “Real Jewish delis don’t serve fajitas and fettucine alfredo,” but Jacob argues that there is nothing wrong with giving everyone a taste of home and keeping up with the times. Molly’s family wants to hold onto their traditions. Delis were a place where Jewish immigrants could eat and talk with people who understood their language and history. Both these perspectives are valid, and are representative of something many Jews have struggled with throughout history — the balance between keeping the traditions and assimilating. It’s the same theme that another famous Jewish matchmaking movie explores — “Fiddler On the Roof” — which also gets a shout-out in “Hanukkah on Rye.”

Maybe in the future, Hallmark will make more than one Hanukkah movie for every 40 Christmas movies, or even a Passover movie or another holiday, as they do release movies all year long. But for now, I’m happy to have at least one Hanukkah movie I’d gladly rewatch every year.