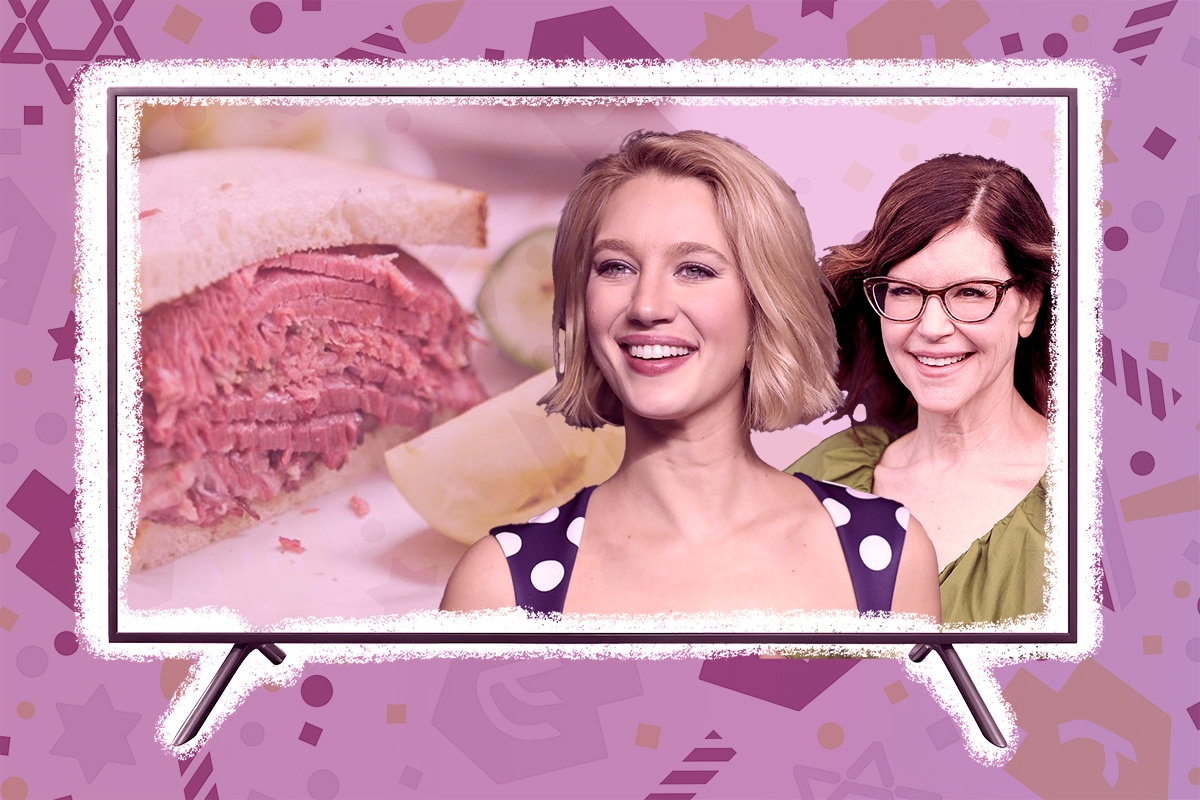 Oh my sweet baby Maccabee. A new Hallmark Hanukkah movie, “Hanukkah on Rye,” is coming out this December and wait until you hear all the details about it. Seriously, prepare to be shaken to your Jewish core.

First of all, yes, this movie is about a Jewish deli — actually, Jewish delis, plural. This has been a long time coming for us, some would say since “Crossing Delancey” days. And yes, just like “Crossing Delancey,” this movie will have a meddling bubbe — in fact, two meddling bubbes — and a matchmaker too (though no one will ever match the greatness that was Sylvia Miles). It will also be all about the push and pull between tradition and modernity.

The movie is about Jacob Leven and Molly Gilbert, whose families both own “world class delis.” They’re each trying to pave their own path and modernize their family businesses to bring them into 2022. The two meet when Jacob goes to New York City to scout for a new deli location — and while there are sparks, they’re too busy being Jewish food professionals (running a Jewish deli is no joke!).

Concerned about their grandchildren’s lack of a love life, Molly and Jacob’s Jewish grandmothers both sign them up for an old school matchmaking service that involves writing letters (not e-mails, actual letters!). Not knowing that they’re writing each other, the two form a real connection through these missives. In real life, tension escalates between the two as Jacob decides to open a deli on the same block as Molly’s. Gasp!

As the movie tagline asks — will a Hanukkah miracle keep them together? (Spoiler alert: Yes, it will, this is a Hallmark movie.)

This premise is giving me strong Joan Micklin Silver and Nora Ephron vibes (“You’ve Got Mail,” anyone??), all packaged in a schmaltzy Hallmark package (hey, schmaltz is great in a Jewish deli!).

Do I wish the Jewish deli movie was an actual high production value romcom? Maybe. But perhaps this is just the beginning of an oncoming Jewish deli romcom era — paging Billy Eichner and Judd Apatow.

Now, let’s talk about this cast, OK? This movie will star the one and only Yael Grobglas, aka Petra from “Jane the Virgin,” as Molly. I adore Yael in everything (she recently had to learn to speak in both Yiddish and Polish for a role in the excellent Amazon Prime series “Undone.”) I would watch anything for her, and this is no exception.

But that’s not all — this movie also stars Jewish mama Lisa Loeb (!!!) who could make me “Stay” through even the cheesiest Hallmark movie (sorry, I had to. But also Lisa makes the best, sweetest children’s music).

And that would have been enough (dayenu) —  except that very handsome nice Jewish dad Jeremy Jordan will star as Jacob. You may know Jordan from “Supergirl,” “The Flash” and his many Broadway and off-Broadway appearances — including “Newsies,” which you can watch on Disney+. This man is oh-so-talented. Though let’s hope this movie will be better Jewish representation than “The Last 5 Years.”

“Hanukkah on Rye” is also currently casting for some really precious roles (the movie, like all Hallmark movies, is filming in Canada, specifically Winnipeg, so that’s one thing to consider). These include Molly and Jacob’s meddling bubbes; Mrs. Tychosinsky, an old-school matchmaker; an emo girl who sings an emo version of a Hanukkah song (it’s 2022 and I guess emo girls are still a thing? Who am I to argue with the greatness that is Hallmark); a middle aged latke aficionado and deli regular; and a kid who is excited to have Jacob “teach them some sweet tricks with the dreidel.” We have never met such a child, but OK.

Here’s hoping Hallmark doesn’t skimp on the food styling for this one, that the Jewish jokes aren’t too stereotypical, and that the bubbes are as loveable as they deserve to be. The movie will be premiering on December 18, which is the first night of Hanukkah. Here’s hoping it’s, um, well, lit.