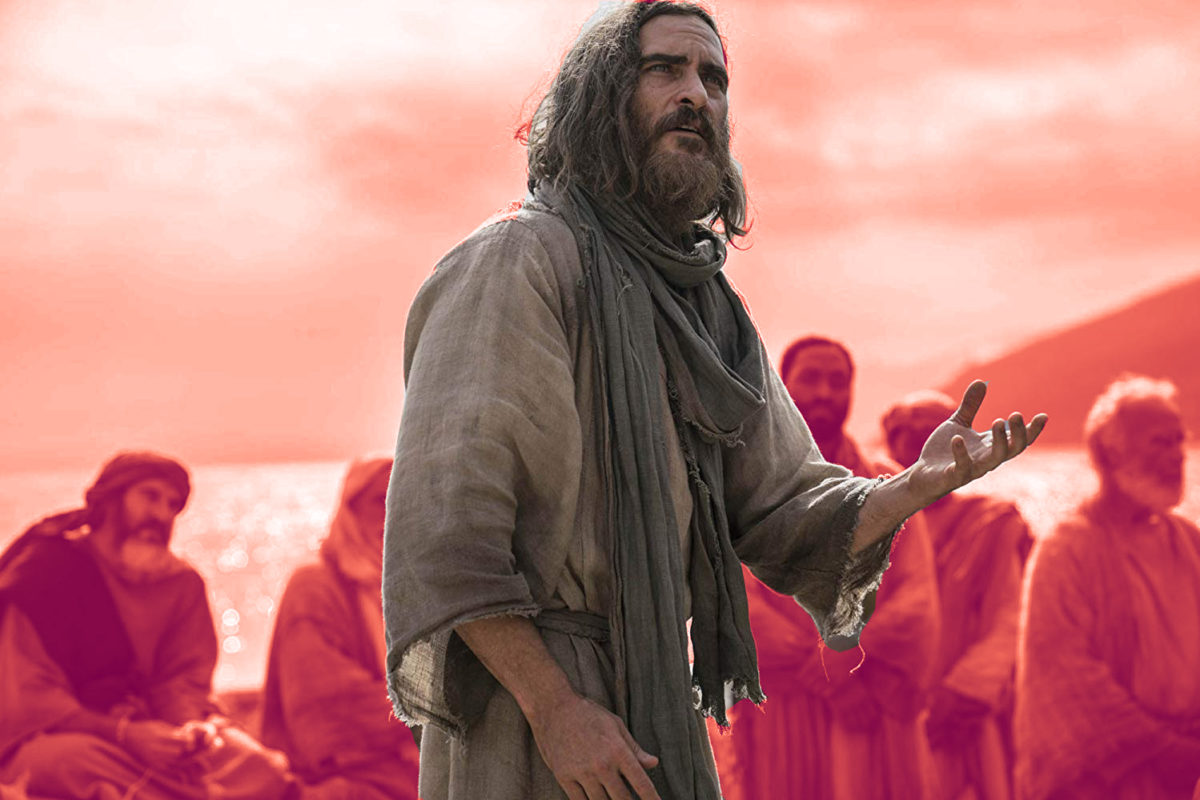 There’s a new Jesus movie out and, while it’s about the Christianity’s central figure, the film has and it has A LOT of Jews in it!

Mary Magdalene was released on Friday, April 12, and it is about… drum roll, please! …  Mary Magdalen, who is possibly Jesus’ most controversial and most frequently mentioned apostle.

The movie is directed by Garth Davis — who also directed Lion and the TV series Top of the Lake — appears to be the first female-centric depiction of Jesus’ story. With a script written by two successful women, Helen Edmundson and Philippa Goslett, the movie dispels the notion that Mary Magdalene was a prostitute, and instead explores how this Jewish woman left home and became one of Jesus’s most trusted disciples.

The movie stars Rooney Mara as Mary Magdalene, and her real-life boyfriend, Joaquin Phoenix, as Jesus. Aside from the long hair and the beard, Phoenix has at least one other thing in common with Jesus: their moms are Jewish!

But that’s just the tip of the iceberg — or, erm, first grain of sand in the Judean hills. Because there are actually a whole lot of Jews in this film — and not just any Jews: an all-star team of Israeli actors.

Of course, perhaps it’s not terribly surprising that a movie that takes place in Roman-occupied Judea, the ancient land of Israel, has a very Israeli cast. Then again, other movies about Jesus’s life (like, cough, The Passion of the Christ, cough) don’t have nearly as many Jews or Israelis in their cast.

Here’s a little overview of the Israeli and Jewish actors in the movie — many of whom you may recognize from the incredibly watchable Israeli TV series, Shtisel:

Judging from the trailer, Phoenix plays quite a charming, warm Jesus. And just like Jesus, has Jewish roots (though he doesn’t really talk about them). Phoenix was born to a Jewish mother from the Bronx. His father was Catholic, but the two joined a cult called the Children of God, and roamed the world with it… When they left the cult, they changed the family’s last name to Phoenix, to signify rebirth. So is Joaquin Phoenix Jewish? I guess the answer is, it’s complicated.

If you’ve watched both seasons of Shtisel — and if you haven’t, exactly what are you waiting for? — you know Yaron as Libby Shtisel, the charming, quirky cousin from Belgium who has a complicated relationship with her cousin Kiveh (played by Michael Aloni). Yaron is no stranger to playing religious roles — she is wonderful as the star of Fill the Void and Felix and Meira, two very different movies in which she plays a tortured ultra-Orthodox woman quite movingly.

Lior Raz as the leader of Magdala

Lior Raz plays the leader of Magdala, Mary’s hometown. But to Israelis, he is the leader of Fauda, the incredible action thriller TV series (that you can, and must, binge on Netflix RIGHT NOW) that is based on his own experience in the Israeli army in the Duvdevan anti-terrorism unit. Here’s another fun fact: Raz had a brief stint as Arnold Schwarzenegger’s bodyguard after the army.

The Turkish-French actor plays the father of Mary Magdalene. Karyo is not Israeli, but he is does have Sephardic Jewish heritage from his father’s side. Karyo says he was brought up to respect his Jewish roots, and even traveled back to Turkey to have his bar mitzvah with his father. Karyo married a Tunisian Jewish woman; they raised their daughter Jewish.

You probably know her as the intrepid teen Ruchami in Shtisel, or maybe from her role in The Zookeeper’s Wife. Haas, 23, is also about to star in another biblical adaptation, a modern retelling of the Tale of Esau, starring Harvey Keitel. Impressive!

Respected Israeli actor Gavriel plays Phillip the Apostle. He’s had roles in many Israeli TV shows and movies, like The Band’s Visit and Fauda. But my favorite Gavriel role is that of a blind prison doctor in The Dark Knight Rises.

Brahom, who plays James, one of Jesus’ 12 apostles, is not Jewish, but the Palestinian-Israeli actor was raised in Jerusalem and has starred in some amazing Palestinian and Israeli films, like A Borrowed Identity and The Idol. He also stars in Hulu’s The Looming Tower opposite Tahar Rahim, who plays Judas in Mary Magdalene.

You can  binge watch so many shows and movies with the multi-talented Tzachi Levy (he’s also a singer and speaks seven languages). On Netflix, you can see him in Fauda, Mossad 101, Hostages, and The Angel. He also made the news last year for marrying Lucy Aharish, an Israeli newscaster who is Muslim, and you can listen to the couple speak about their relationship to Christiane Amanpour here.

Shtrauss, who plays John, is most know to Shtisel viewers as Lippa Weiss, the selfish, tortured, and, at times cruel husband of Gitti Weiss. Shtrauss has a long and successful career on Israeli TV and theater. His most recent role is that of a hardened criminal in the Israeli legal drama PMTA.

Michael Moshonov playsMatthew. Moshonov is the son of Israeli actor and comedian Moni Moshonov, and has been acting since the age of 4. Most recently, Moshonov starred in The Little Drummer Girl, a TV series based on a John Le Carre novel, directed by Park-Chan-Woo (Oldboy).

Sheleg — Renta Baifus in Shtisel — plays Jesus’ mom in the film. Sheleg, who comes from a secular family, used to be ultra-Orthodox, and was married to the son of a famous rabbi. She even had a brief stint as a modest clothing designer. She also starred with Hadas Yaron in Fill the Void, a drama about matchmaking in the ultra-Orthodox world.