These Are the Most Popular Jewish Baby Names Around the World 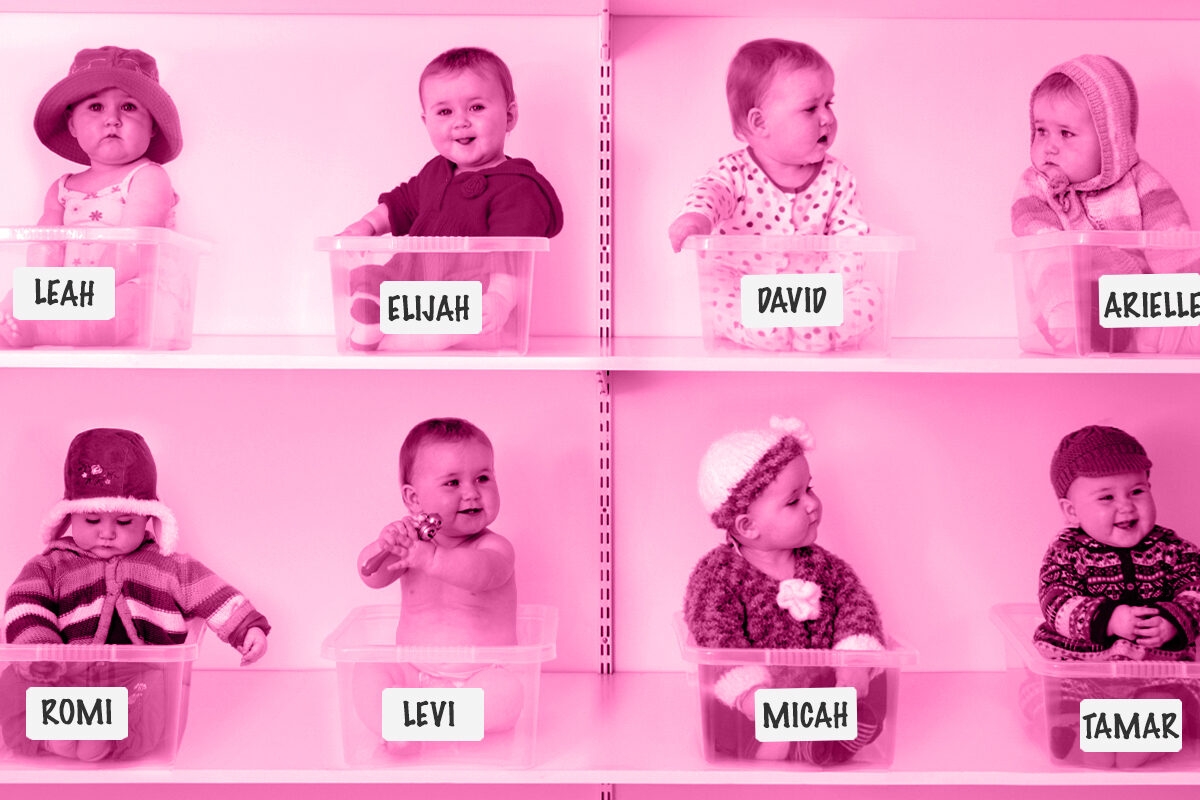 Asher, Noah, Elijah, Hannah, Leah. Is this a partial nursery school class list at your local JCC, or does it represent a smattering of preschool kids in many parts of the world? Both answers are, in some ways, correct.

As a lifelong name nerd, and mother of two young Jewish boys who were born in Germany and currently living in the U.S., I have found it interesting how certain “Jewish names” have achieved levels of worldwide popularity in recent years. I’m even more interested in which names Jewish communities around the world are choosing as names for their children. Are they opting for certain traditional Biblical names that have become popular over the past decade or so, or are they opting for the Biblical names more commonly used in prior decades? Are modern Hebrew names, or even Yiddish or Ladino names, topping the Jewish name charts these days in more than one country? Or are Jewish parents primarily choosing to go with names that reflect the culture and language they are surrounded by, avoiding Jewish or Hebrew references altogether?

Let’s take a little armchair-travel tour and find out…

In the U.S., many parents, regardless of their religion or ethnicity, are choosing traditional Jewish or Hebrew names that were generally not popular outside of Jewish or religious Christian communities until recently. Some examples include Levi (#33 in popularity in 2018), Eliana (#83 in 2018), Ezekiel (#87 in 2018), and Asher (#47 in 2018).

It’s hard to gauge their specific popularity and usage within the Jewish community, but what’s interesting is that many Jewish families who identify as secular Jews have embraced the trend as well. In years past, such families might have eschewed such traditional names, opting instead for the secular naming trends of the day. These days, however, they are much more likely to give their child a name like Micah, which jumped from #186 in the rankings from 2000 to #103 in 2018.

Interestingly, Jewish boys were much more likely to receive a “Jewish name” than a girl, and this seems to still be true today (at least in less traditional communities). This means that a Jewish family naming their child may be more apt to call their baby boy Aaron or Levi rather than giving their baby girl a name such as Shaina or Ruth. This might stem from the concept that Jewish males were more likely to have “typically Jewish” names since they were generally the ones representing the community in wider society, and perhaps this naming custom persisted even as society evolved.

Many American Jews also opt for Israeli names, but what’s interesting about that is they are often considered to be “old-fashioned names” in modern-day Israel: Adina and Shoshana are two such examples.

In Israel today, Jewish naming trends tend to differ somewhat than places like the U.S., where classic biblical names remain popular. In Israel, David and Ariel topped the charts for boys in 2018, though these names tend to be used primarily by the religious communities there. Secular Israelis prefer less Torah-centric names; something that’s well evidenced by the popular girls’ names list, with Tamar and Maya leading the way.  Other names in the top 100 in Israel reflect that secular trend, with boys’ names like Yoram and Ofir, and Ayala, Adel, and Romi for girls.

What do Jewish naming trends look like in other countries? In the UK, the most popular Jewish baby names reflect more traditional British popular names, with Jack as the most popular boys’ name and Ella as most popular girls’ name among the Jewish community. This reflects current naming trends in larger British society: Jack was #9 for boys and Ella #15 for girls last year. However, names like Isaac, Talia, and Esther — which made the top 10 for the Jewish community’s baby names — did not rank as high in the larger British context for popular baby names.

In Germany, an intriguing phenomenon is that names that were mostly considered “traditionally Jewish” are having a moment across the land. Names like Noah, Hannah, Lea, Sara — names which were previously used almost exclusively by the German Jewish community —  have become wildly popular for all German children in recent years. Within the Jewish community itself, after World War II, the usage of Hebrew or typically “Jewish” names has also increased. Before the war, many Jews used more “assimilated” German names such as Otto, Hermann, or Bertha; post-War, names like Rebekka, Samuel, and Benjamin gained traction.

This phenomenon in Germany, along with the revival of traditional Jewish and Hebrew names in the U.S., is likely a reflection of Jews feeling more comfortable using names from their heritage in their countries of residence, instead of feeling the need to “fit in.” The worldwide movements of racial and cultural consciousness, beginning in the 1960s and 70s, made it “cool,” or at least acceptable, to use names from one’s own tradition instead of automatically using a name that won’t make you stand out from the crowd —  this also includes last names.

Unlike the comeback of biblical names, though, there’s been scant evidence of  Yiddish or Ladino names rising in the ranks around the globe. Then again, they’ve got a chance: Names popularly used by Jews in the early 20th century in both the U.S. and Germany have been creeping back in to both countries, like Frieda for girls and Louis for boys in Germany; Sadie for girls and Leo for boys in the US.

So, like all things about the future, we’ll have to see… maybe Isaiah, Leah, Yuval and Gefen will be replaced by Feivel, Yetta, Fervoza, and Palomba in the years to come.