This Amazing Israeli 9-Year-Old Trans Girl Is Our Hero 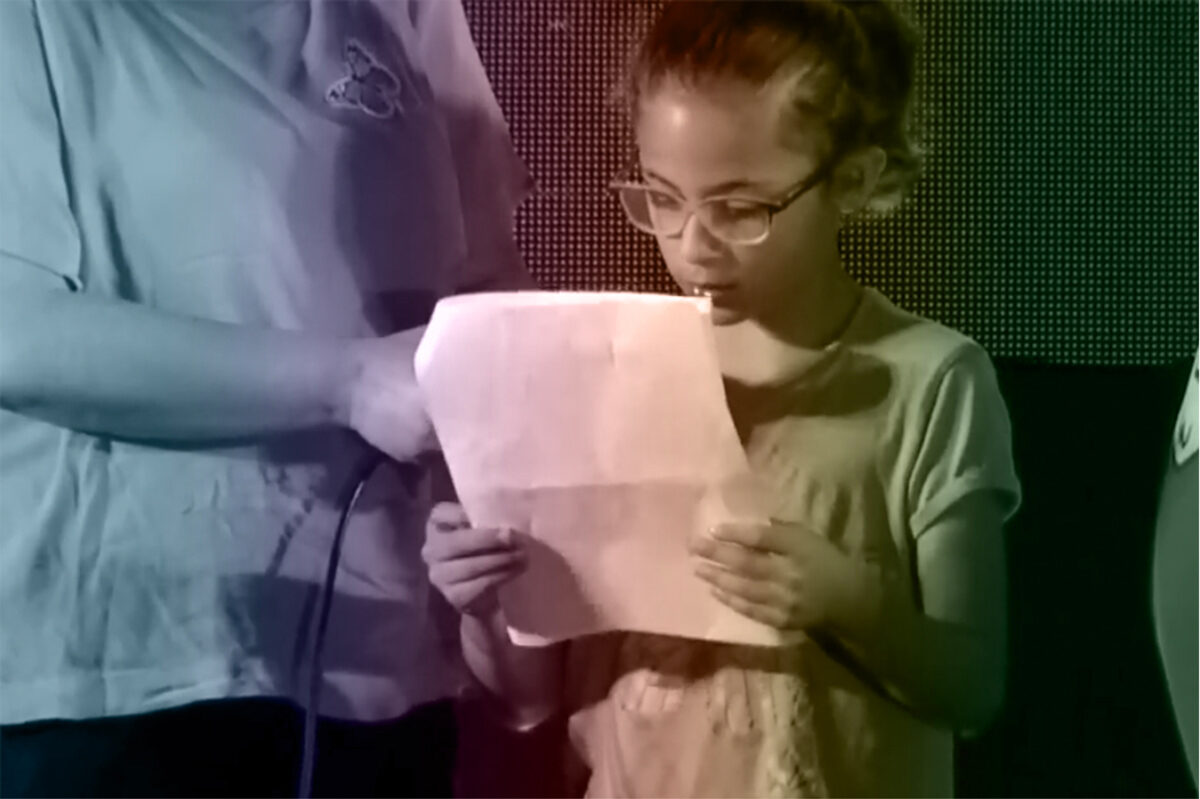 At a small-ish Pride rally on Sunday night in Jerusalem, a sweet, bespectacled 9-year-old took the stage. Her name was Rina, and, as her face was projected on a giant screen behind her, she gave a truly amazing speech. Here’s an excerpt:

“My name is Rina and I am almost 10. I’m a sister, a daughter, a granddaughter and great-granddaughter, and more. I love to draw, to ride rollerblades. I love to play on the phone and sports. I am also a transgender kid. Yes, transgender kids exist. Trans kids can know who they are — and say it. I am here for all the kids and teens who couldn’t be here. For all of those rejected by society. For all those who didn’t get a family and an environment that is loving and accepting. My parents didn’t do much. They just stopped and listened to me.  And that’s what we all want. It’s not a shame to be LGBT. It’s not bad to be different — because we are all different in some way.

For students who are learning with LGBT kids at school: don’t be afraid of us, don’t ignore us, play with us. To parents whose kids may be LGBT — don’t stop them from playing with dolls, let them be who they are because sometimes people write things on the internet that are really wrong.”

The speech was beautiful and heartfelt. On each side, Rina was flanked with a loving, beaming parent. The crowd lovingly cheered her. It is really such a pleasure to watch — and truly something for all of us to kvell about.

Knowing that you’re trans at 9 is hardly unusual — in fact, Rina already knew that she was trans at age 5. Many trans kids have feelings that they are not the gender that they were assigned at birth very early in life. An incredible interview with Rina for Haaretz illustrates just how much that knowledge can weigh on a young kid born in the wrong body:

“It was very hard… I felt that I was born a girl just in a boy’s body, that was the feeling,” she said. “I saw girls and I understood that I was like them, but I didn’t know if what I felt could exist.”

For the longest time, Rina didn’t have the terminology for what she was feeling: “I tried [to tell] just mom and dad, but every time I stopped. Many times I told Mom, ‘I want to tell you something.’ She asked, ‘What?’ and then I said, ‘It doesn’t matter, it doesn’t matter.’ I didn’t know how to say it, even. I didn’t know how they would react and how to even explain it.”

When young kids like Rina come out as trans to a loving and accepting family, they are sometimes put on puberty blockers, a reversible treatment that stops kids from going through puberty. Studies show this may literally be lifesaving step for trans kids, helping to prevent suicide which has especially high rates among trans teens, particularly Black trans teens.

Embracing your trans kid is truly the only responsible parenting choice to make. And being accepted as trans has truly changed Rina’s life. As her mom says, she is thriving.

Unfortunately, however, she is also being bullied at school — kids purposely misgender her, don’t play with her during recess, and call her names. As the Haaretz article describes, her older brother has taken to protecting her during recess, and Rina has started taking self-defense classes because she was scared of getting beaten up at school.

Sadly, after Rina’s speech, a bunch of other bullies joined the ranks of the schoolyard ones to which she had grown accustomed. Nay, these new bullies are a bunch of grown-ass, mostly (but not all!) right-wing adults — some of them Israeli politicians and news commentators. These people began started misgendering her, calling her and her parents misguided, and attacking the pride event for celebrating her. (None of the people could be bothered to, you know, read some of the actualscience on the topic.)

A bunch of them called the celebration of Rina’s transness “perverted.” Both right-wing politician Yinon Magal and right-wing journalist Shimon Ricklin of Channel 20 compared Rina’s transness to having sex with minors, calling those who cheered Rina on “sickos.”

To this I have to say: stop sexualizing trans kids, you total creeps. I mean, stop sexualizing kids, period, and especially an even more vulnerable minority. Yeesh. Kids can know their sexual identity and sexual orientation without having to be sexualized by disgusting adults — the same way a 9-year-old cis and straight girl might know she wants to marry a boy, or that she wants to wear nail polish, before they’re ever ready to consider sex.

What saddened me most is the many, many “everyday” Israelis who were leaving comments on Twitter and Facebook, expressing their disgust and consternation without learning anything about what being trans means; without reading a single study, or a single story, about the experiences of trans kids. Without having ever met a trans person. Without living a single day in the skin of a trans kid.

In fact, these commenters really demonstrated that what Rina told the crowd in Jerusalem was so painfully true: “People write things on the internet that are really wrong.”

In less than a decade, Rina has gone through more than so many of us ever will. She has had to fight for her identity and for her happiness. She had to find words for things that were not easily accessible to her. She spent nights crying. She had to fear rejection from her family and peers. She’s had to deal with rejection from the latter. And yet, she stood there, strong and fierce, and spoke for herself and so many young queer and trans kids, who I dearly hope heard her words and were inspired by her strength.

Rina, as well as all transgender kids, should be embraced. That is not the valiant thing to do. It is the right and the human thing to do.