This Catskills Mystery Novel Is a Gothic 'Mrs. Maisel' – Kveller
Skip to Content Skip to Footer

This Catskills Mystery Novel Is a Gothic ‘Mrs. Maisel’ 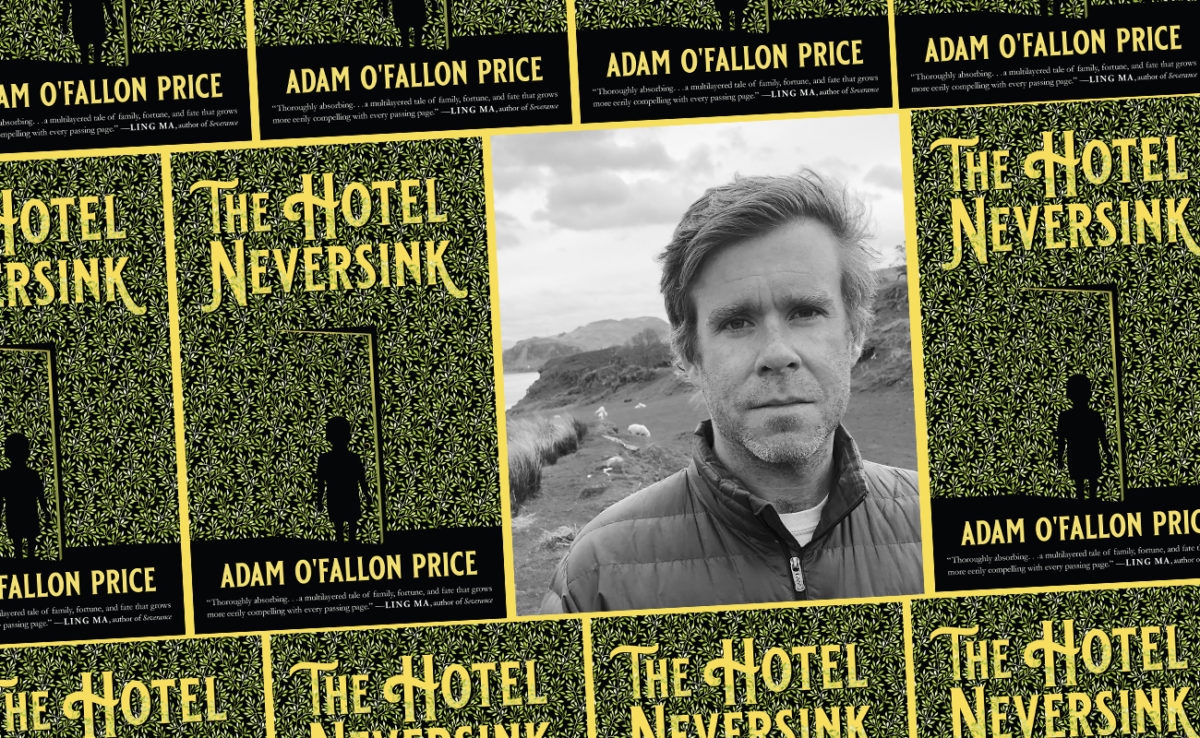 The Catskills are having a moment — again! From The Marvelous Mrs. Maisel to “think” pieces about the resurgence of the area, the once very Jewish vacation destination seems to be everywhere these days.

And now, there’s another addition to the Catskills canon: The Hotel Neversink, a new mystery novel centered on a Jewish family that takes place at a magnificent hotel over the course of decades.

“I’m happy there’s been what seems like a resurgence of interest in the Catskills, and hopefully my book can be a little part of that,” author Adam O’Fallon Price tells Kveller.

Nicknamed “the Borscht Belt,” the Jewish Catksills have “a lot of resonance right now, as there’s all this renewed anti-Semitism, xenophobia, and anti-immigrant sentiment,” he adds, noting that the resort area became popular among Jewish families in the mid-1900s as they were barred from vacationing elsewhere. “The Catskills themselves are a testament to what immigrants can bring.”

The novel’s namesake hotel is based on the iconic Grossinger’s Catskill Resort Hotel — once one of the largest Borscht Belt resorts — and the novel’s matriarch, Jeanie, is based on Jennie Grossinger, who turned her father’s resort into a lucrative and sought-after destination.

However, unlike the Grossingers, the family that owns the fictional Hotel Neversink is troubled by a series of children who go missing. We had a chance to chat with Price about his Catskills murder mystery, which spans from the the 1930s to the 2010s.

Why did you set the story in the Jewish Catskills, and center it on this Jewish family?

I was living in Ithaca, New York at the time, and I became really interested in and fascinated by the phenomenon of the Catskills hotels. I visited them, and became friends with this older man who was the husband of my wife’s boss. He had grown up in Brooklyn and had gone to Grossinger’s from the ’40s to the ’70s. He had all of these generational stories about Grossinger’s, in particular, and it was fascinating. I started visiting them, and researching, and I really felt fascinated by this place, and this sort of unique phenomenon in American cultural history.

I went to the Concord and Grossinger’s. Grossinger’s you can kind of break into — you’re not really supposed to, they have a guard in this black car up on this hill, it’s very ominous. At one time, Grossinger’s had the largest indoor swimming pool in the country. So all the windows are broken out around this huge auditorium. It’s very easy to sneak into it — so I did a couple of times and explored and took pictures, and you get such a sense of the life that it used to have. 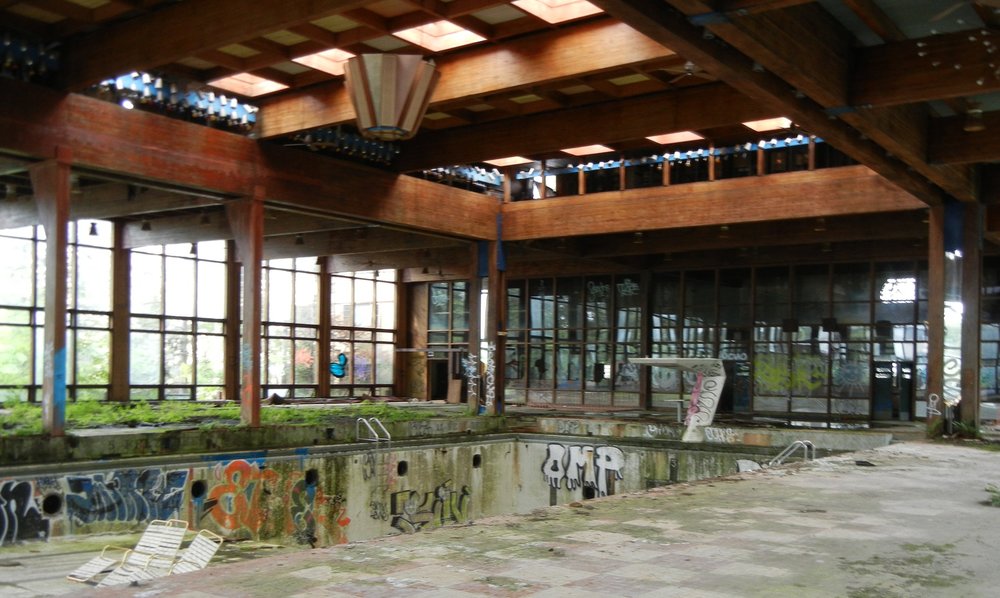 The mystery of the disappearing children is not at the forefront of the story. Rather, it kind of simmers in the background. Did you set out to write a murder mystery?

I sort of picked the brain of this man who I’d become friends who had been there. He had all these stories; one of them was from the 1970s, when he was taking his kids, and he was talking about how the hotel was already in decline at the point. And he was saying that they couldn’t really get people in there, so the way that they stayed afloat was renting the hotel out in these packages, like [to] civic organizations. He had a distinct memory of this Polish Policeman’s league being there when [his family] was there, and kind of raising hell. I was really taken with that set-up. So that was the first chapter in the book, the one where the Polish policeman are there in the ’80s. I wrote it piecemeal, kind of imagining these different characters at the hotel at different times.

It became clear over years of drafting it that it needed more of a spine. And the disappearing children had already been in it a little bit, so [that plot] was an obvious thing to develop to give it more of a narrative, novelistic spine. Originally, it was a novel in stories. I think it still has that feel, but the hope is that the murder mystery coheres into more of a novelistic mystery, rather than just a collection of related stories.

It’s interesting because each chapter moves the story along but they’re also self contained.

I wanted all of these different characters and chapters and voices to really be different; to sound different and have different narrative styles and different points of view.

One of those stories, “Joseph (1960),”  was written as a Borscht Belt stand-up act. Can you talk a little more about that?

I watched a bunch of old Borscht Belt comedians, and read entire acts online to get a feel for that timing. And [I tried] to kind of do sort of a blend of that comedy style with the actual fictional narrative. That was a tricky one to [write], and I definitely borrowed from a lot of comedians, that sort of constant, rapid-fire joke within joke within joke.

What do you think of popular depictions of the Jewish Catskills, like the Marvelous Mrs. Maisel episodes set there?

I think that show is pretty entertaining. And I thought the Catskills stuff, in particular, was really fun. 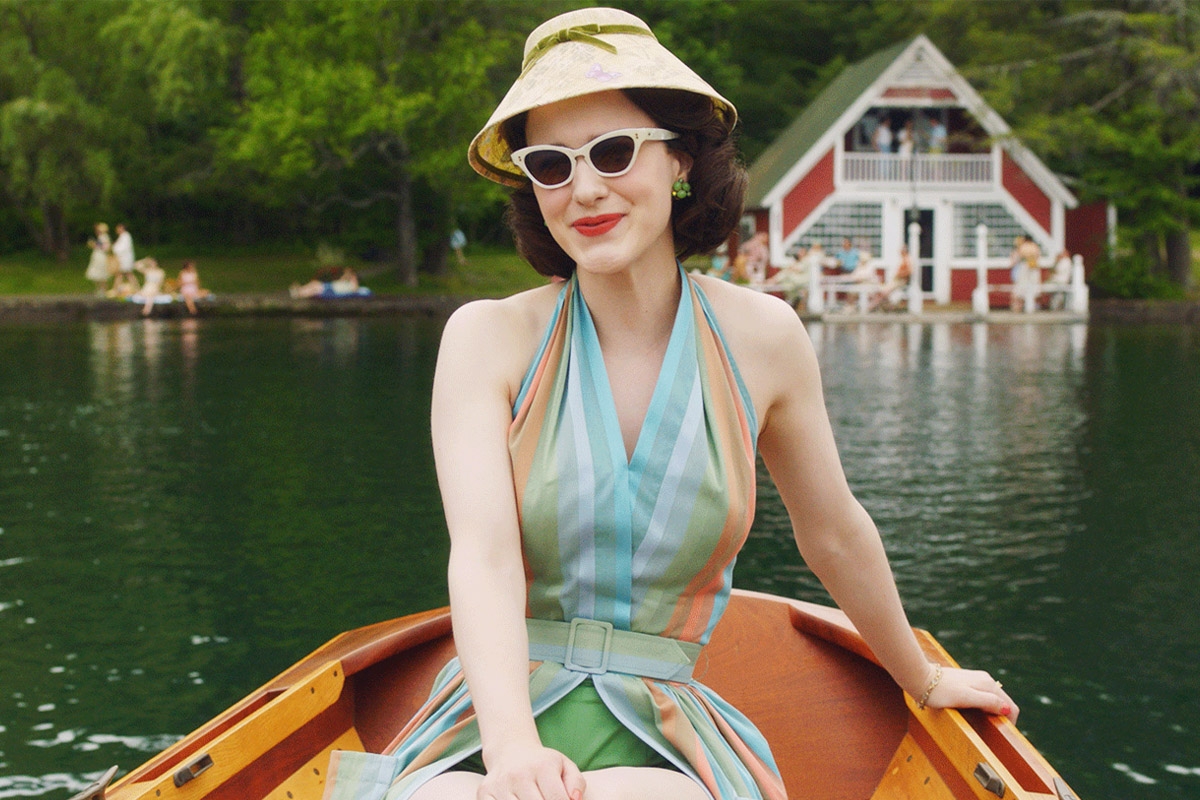 I think my book is really dark, so then you see it depicted in Mrs. Maisel or in Dirty Dancing, and they’re definitely lighter, airier versions of it. I think that’s probably as it is was; I think I’m doing a gothic version of it that didn’t really quite exist in real life — or maybe is more influenced by what they became than what they were in the ’50s.

When you see [the resorts] now, it’s hard not to be taken with how melancholy and dark it is. But, then you see in Mrs. Maisel how they were hives of such fun and optimism and a kind of innocence.

As you were learning about the heyday of the Jewish Catskills, what was your favorite tidbit of history?

There’s this famous matchmaker, Irving Cohen, who worked for the Concord. He was known as “King Cupid of the Catskills” and he was reputed to have this preternatural ability to pair people off — apparently he claimed to be responsible for thousands of couples. I don’t have one tiny particular thing about this guy, but the alacrity with which he match-made and how successful he was at that, was really fun to research.

And if someone wanted to learn about the Catskills, where should they start?