This ‘Fiddler on the Roof’ Coronavirus Parody Is a Delight 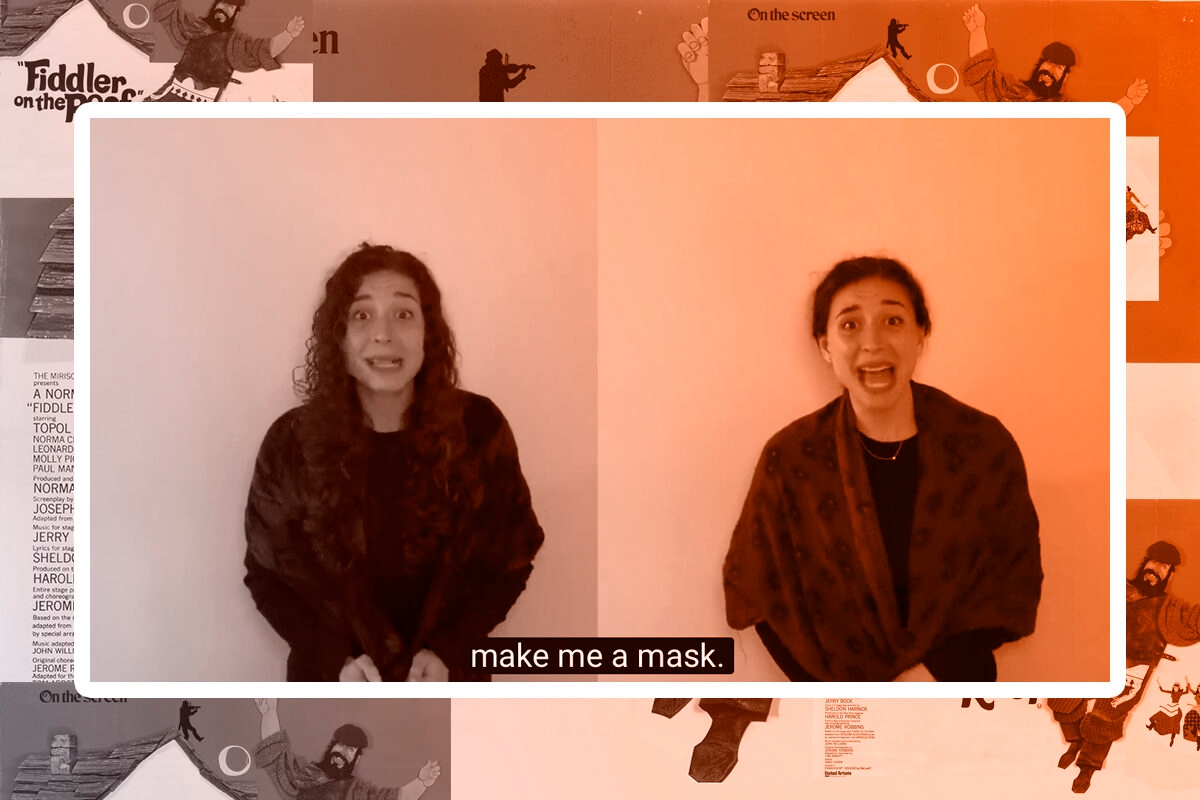 When Governor Andrew Cuomo announced last week that all New Yorkers need to wear masks when they’re not able to social distance, he probably didn’t know that ideal theme song for his new mandate already existed.

Actress and singer Abby Goldfarb created “Maskmaker, Maskmaker,” a parody of the iconic Fiddler on the Roof’ song,”Matchmaker, Matchmaker,” and it’s the perfect anthem for all those of us who are mining the internet for the perfect face covering.

“Forget 1905. It’s Fiddler On The Roof set in the time of peak Coronavirus,” the 28-year-old wrote on the Facebook post in which she shared the video, which now has over 200k views. “Watch these three sisters face this challenge together!”

Yes, in this updated version of this classic song from the classic Jewish musical — in which sisters Hodel, Chava, and Tzeitel sing about a matchmaker finding them a nice Jewish boy to marry — these three “sisters” (all are brilliantly played by Goldfarb) are pleading to a “maskmaker” to make them a mask, since “Amazon’s out, Etsy’s a task.”

In the delightful part of the song where Tzeitel pretends to be matchmaker Yenta, Goldfarb — who jokingly refers to herself an “ingéjew” (a mix between “ingenue” and, yeah, “Jew”) sings to “Chorona” and “Chovid,” inserting the “ch” sound to add just a touch of Yiddishkeit to our pandemic.

There’s tough competition out there, but I’ve got to say that, at this point, this is my favorite Jewish coronavirus parody of all time. Goldfarb is a total pro — she has been in two productions of Fiddler on the Roof, including the off-Broadway Yiddish version directed by Joel Grey.

And yet, the Jewish actress still considers it her favorite musical: “Anyone and everyone can find some connection to it whether they are Jewish or not,” she tells me over e-mail. “It is about traditions and what it means to break them. It’s about immigration. It’s about feeling ‘other.’ Honestly, it is about EVERYTHING, which is why I love it so much. It feels like it is a part of my heart and soul.”

We couldn’t agree more! But we’d be remiss not to mention how versatile Goldfarb is; since the pandemic started, she’s created amazing parodies of other songs from other famous musicals, from Dear Evan Hansen to Grease. Because she’s stuck home in Midtown Manhattan with her husband, social distancing, and watching TV, she has dedicated her time to creating wonderful, topical parodies.

Aside from the Fiddler parody, one of my favorites is this Sondheim one from Into the Woods called “I Know Things Now (about Infectious Disease).” Originally sung by Red Riding Hood, Goldfarb sings the song in our social distancing uniform — A.K.A. a hoodie — and incorporates her daily run in Central Park (because, you know, “the woods”).

And then there’s this Hamilton medley that features a cameo from her very funny Jewish mom singing about her very relatable Zoom troubles. (Goldfarb jokingly says she has five moms. That’s because her moms separated when she was 9, and both have new partners — and her fifth mom is her biological mom’s best friend, who is the wife of her biological father).

About her process, she tells me: “First, I find the song I want to parody (I am trying to find ones that are extremely popular so it can reach the widest audience and appeal to as many as possible). Then, I decide what the hook or theme of the parody will be. For example, I sift through the news and see what is most current, etc. Then I start writing! I can’t tell you how many times I have searched for things that rhyme with “cough,” “shutdown,” and “Corona” (yeah, not much rhymes with Corona…). ”