This Jewish Family Is Traveling to Literally Every Single Country 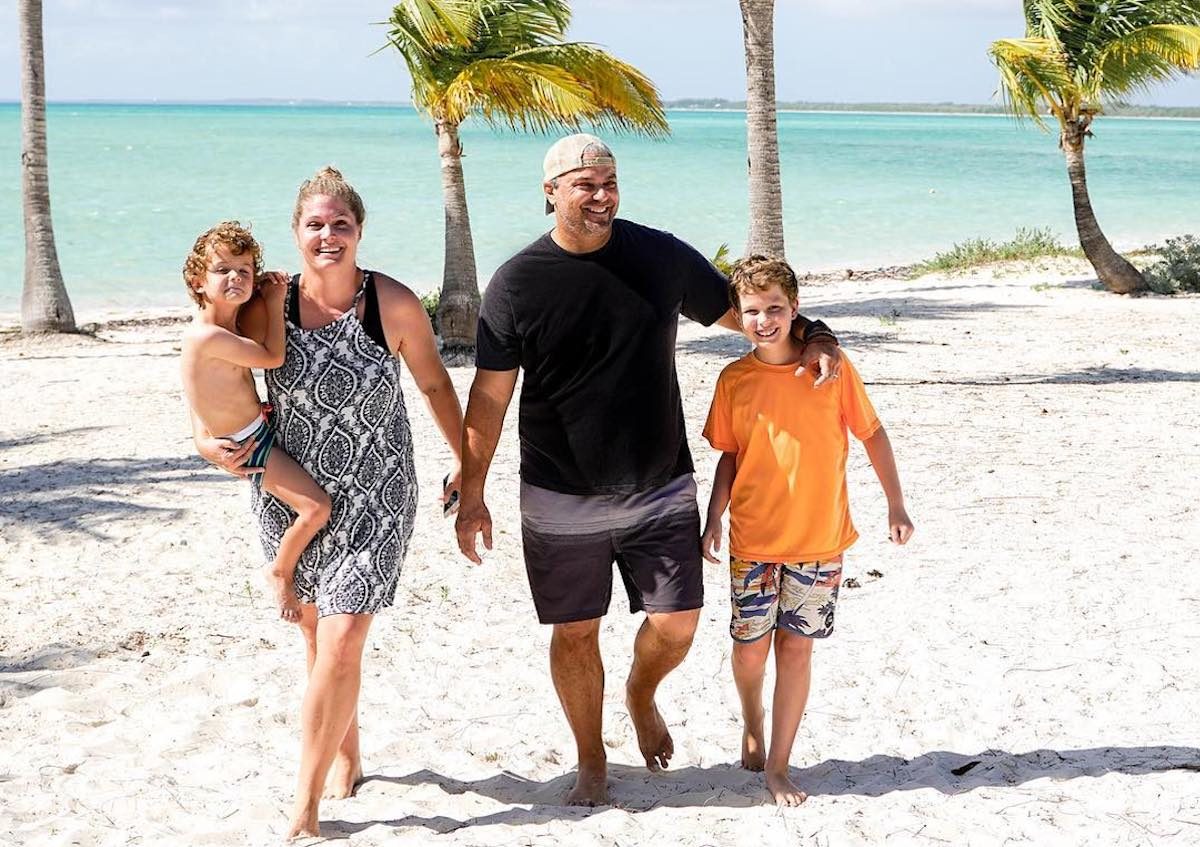 What would you do to make it into The Guinness Book of World Records? Eat an absurd amount of bagels? Jump rope for days on end? Grow your nails so long that they drag on the floor? Travel to every single country in the world?

The last one might be incredibly expensive and time-consuming, but it’s exactly what one Jewish family intends on doing.

Justin Zackham, a screenwriter who literally coined the term “bucket list,” is currently attempting this feat. But he’s not doing it alone — Zackham and his wife, Katherine, are traveling with their two young boys, ages 5 and 10.

As it happens, this impossible journey has an incredible backstory. After graduating from NYU film school in 1994, Zackham, 48, scribbled what he called a “List of Things to Do Before I Kick the Bucket,” which he later shortened to “Justin’s Bucket List.” Marrying the “perfect woman,” jumping out of an airplane, and visiting the pyramids and the Taj Mahal were just a few things on his list.

And in 2007, he crossed off the first item: Get a movie made at a major Hollywood studio.

A decade ago, I wrote the screenplay “The Bucket List” about two men attempting to cram everything they never accomplished into their last months of life. Producing the film changed my life, and I’ve watched in amazement as the idea of writing a #bucketlist has changed the the lives of people all over the world. My latest movie @secondactmovie tells a similarly-themed story of a hardworking woman (@JLo) who stops blaming the world for her dissatisfaction with life and takes a brave leap towards attaining her dreams. I’m finally taking my own advice and, together with my incredible family, have decided to shake up our lives by heading out into the world in search of an extraordinary life together. Our goal is to become the first family to visit every country on Earth, all 195 of them! We hope that in traveling to incredible places and meeting extraordinary people all over the world, we will teach our boys that people are really good at heart, no matter their race, religion or where they live, and that the more we know about the world, the less we have to fear it. We’d also like them to learn there is life beyond good wifi, but one step at a time. 😉 . . . . . . #secondact #jlo #thisbucketlistlife #filmmaker #bucketlistadventures #familygoals #followyourheart #justbringit #travelwithkids #aroundtheworld #family #familytravel #parentswhowander #familyjaunts #momentsinthesun #travel #forahappymoment #followyourdreams #unplugged #wonderfulworld #moviepremiere #justinzackham #warnerbrosstudios #stxentertainment #fulltimetravel @people

Yes, Zackham’s list is what inspired the hit move The Bucket List — meta, right? Following the success of the film, which starred Morgan Freeman and Jack Nicholson, Zackham was honored by the Oxford English Dictionary and Webster’s Dictionary when they added “bucket list” to their trove of words. (Coining a term wasn’t on Zackham’s bucket list, but he got it anyway.)

About 12 years — plus two kids, two movies, and a TV show — later, Zackham and his family are 21 countries deep into their endeavor. The mission is twofold: Zackham wants to scratch “visit every country” off his bucket list, as well as cement the family name in The Guinness Book of World Records.

After doing an interview this AM, the writer asked me to snap a pic of our current “office”. Needless to say, the boys obliged with gusto. /// #vieques #puertorico #travel #worldschooling #bucketlist #bucketlistlife #homeschooling #travelwithkids /// @thisbucketlistlife @finnzackham @colezackham @jzackham @kmzackham

Immersing oneself in every culture in the world is quite the adventure, but with kids in the mix it can become quite harrowing. Following a trip to the Bahamas, Zackham took some time from his current “office” in Puerto Rico to chat with us about adventures with little ones, if it’s plausible to travel to every single country in the world, and what, if anything, being Jewish has to do with this.

When and why did you decide to travel to every country?

It’s kind of this crazy idea and adventure that we’re embarking on, but I think the reality is we have always loved traveling as a family. We really want to show our kids, especially given everything that’s going on in America right now, to focus on the good in the world. We wanted to show our kids that kindness exists across all different cultures, all different races, and, really, the best way of doing that is to travel.

Your kids are being homeschooled in a very non-traditional sense. What are they learning that they wouldn’t in a classroom setting?

Our boys get to see completely different cultures and ways of thinking than they’ve ever known. In Fez, Morocco, they saw a tiny, single-classroom school in the Medina. Finn, who is 10, was particularly affected by the difference in education. He immediately asked to sponsor a student — he gives a dollar a week from his allowance which directly pays for a boy his age to go to a private school he would otherwise be unable to attend.

How has this voyage affected your family, positively and negatively?

I mean you certainly find out quickly if you can spend that much time together or not — and luckily we can. It takes some getting used to, especially on my part. As a writer I’m used to having much more time on my own. It’s the rhythm of four people living in each other’s pockets.

How did your kids react when you told them what was in store?

The little one is more concerned about the WiFi strength than anything. When we get to the hotel he wants to know how the WiFi is because, you know, YouTube beckons. Our older son, Finn, wants to go to Finland because he feels that he’s going to be welcomed like a king. He wants to go to Greece because he studied ancient Greece.

Do you take breaks? How do you plan to go to every country? And how long do you stay in each place?

So, Guinness listed 195 sovereign self-governing nations; it doesn’t include territories. There are people who have done this before but no group has ever done it. There are ways of traveling and you have to document everything. They don’t want you to stay in any country for more than two weeks, and once you start, the idea is that you keep going; you know, without taking extended breaks unless it’s for an emergency reason. So, we have those rules, but we also have two kids, and if a year goes by and, as much as our 10-year-old loves to travel, if he wants to go home we will do that. We don’t think he will because he loves it so much, but those are our biggest task masters and this is all about them and for them.

What have you learned from traveling with kids? Do you have advice for parents?

Just do it. It’s easier than you think because your kids will adapt faster than you will. You’ll grow closer to your children and grow as a parent. Our biggest tip is to leave extra time on travel days. Airports are stressful for everyone — but more so for children who don’t walk as fast, use the bathroom more, and can’t see over the heads of crowds.

Being in an interfaith family, how do you navigate religion? Do you talk to your kids about Judaism?

My wife’s family is not religious at all and I haven’t practiced religion for years. I do, however, identify strongly with the cultural side of Judaism. I am and always will be proudly Jewish. My oldest son is at the age where we are beginning to talk about what it means to be Jewish. We will read the Torah together when we go to Israel, and both boys will learn about the modern history of our people.

Secret blue hole hidden in the Bahamian forest. After enjoying turquoise water and white sand beaches throughout the Bahamas, we were surprised to find this fresh water blue hole in the middle of nowhere. The Sawmill Sink Blue Hole hides in the remote pine forest of South Abaco at the end of an old logging trail. It was featured by @natgeo in 2010 for the fossils of extinct giant tortoises and land crocodiles found 300 feet below the surface! First blue hole for us! Any others we should put on our #bucketlist during our travels? . . . . . #bahamas #fulltimetravel #welltraveled #kidstravel #familytime #familytravel #travelwithkids #travelfam #familyadventures #travelmadfam #familyonpurpose #heartfelttraveler #oureverydaymoments #loveyourtimetogether #makingmemories #familyvacation #familymemories #travelingkids #kidsofinstagram #igkids #wildandbravelittles #showthemtheworld #travelgram #wanderlust #cruiselife #worldschooling #worldnomads #familyvacay #bluehole

This past fall, during our visit to Spain, we all learned about the Sephardic diaspora from Iberia and the forced conversions for those that remained. This led to some wonderful discussions about what makes our people different, what makes us strong, and why our culture is worth preserving, even if it makes us outsiders. We were able to add another link to this chain this past week in Medellin, Colombia, where we learned that the city was originally founded by Jews who fled from Spain and Portugal.

Some countries aren’t considered safe to travel to. How will you navigate that?

There are some countries that are too dangerous to go to, but there are ways around them. Like, there is a resort island off Yemen that you can go to. It’s more about the journey and the experience.

If you don’t make it into The Guinness Book of World Records, how will you feel?

The Guinness Book of World Records is great and we’d love to get it, but we are doing it for our sons to have that connection, to have an appreciation for each other, and a love of travel. That’s what we hope they get out of it.