This Rabbi Is an Elle Cover Model 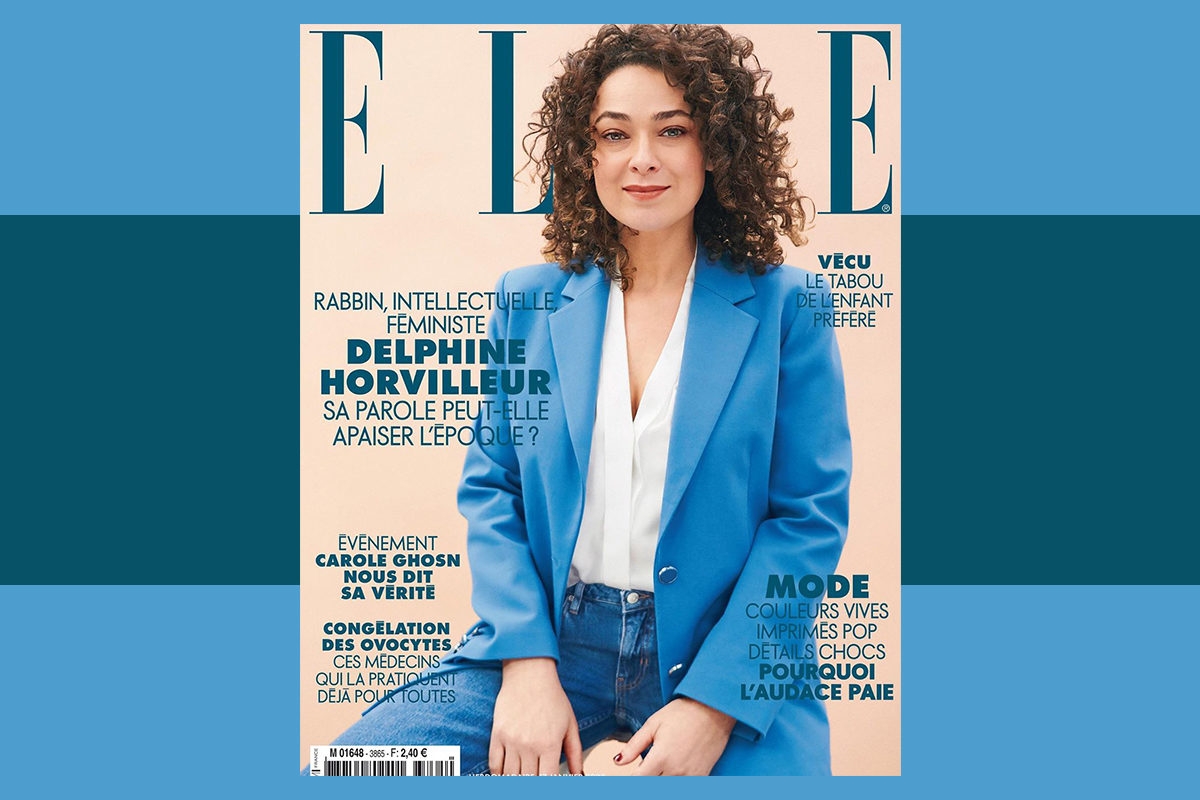 Rabbi Delphine Horvilleur — spiritual leader, public intellectual, mother of three, avowed feminist — graces a January cover of ELLE France. She represents in blue and white, wearing jeans, a white V-neck blouse, and a relaxed aqua blazer. Her hair is a mass of dark curls, her nails are painted a deep red.

Horvilleur is not the image that comes to mind when many French Jews think of a rabbi. There are, after all, just a handful of female rabbis in all of France, where the liberal Jewish movement Horvilleur serves remains small and unrecognized by the Orthodox body that governs much of religious life there.

Still, Horvilleur, who was ordained stateside at Reform Judaism’s flagship seminary, enjoys a burgeoning public profile in France, which is home to some 500,000 Jews. She regularly weighs in on anti-Semitism and Muslim-Jewish relations in national media, among other topics; has officiated at the funerals of famous French Jews, including the politician and Holocaust survivor Simone Veil and the fashion designer Sonia Rykiel; writes books and runs a small but influential French-language journal of Jewish thought. (She’s also married to the French economist Ariel Weil, the district mayor of a historically Jewish neighborhood in Paris, and they have three school-age children.)

Her position gives her a unique power but also places her in a unique bind. “I often feel held hostage between those who see you as a traitor because you question tradition and those who accuse you of being a traitor precisely because you are not radical enough in the way you shake things up,” she told ELLE in a wide-ranging interview.

Here are a few of the highlights from that conversation.

On what happened to the “je suis juif” movement:

Horvilleur said the Jewish communal solidarity seen in the wake of a deadly siege at a kosher supermarket in Paris has largely dissipated. After that 2015 attack, many non-Jews showed support for Jews by marching with signs that read “je suis juif,” or “I am Jewish.” Five years on, with anti-Semitic incidents on the rise, “society has become extraordinarily diffracted, notably the fight against hate, racism and anti-Semitism,” she said. In decades past, the battle against intolerance was perceived as a universal one. “Today those who fight against racism are no longer necessarily on the side of those who fight against anti-Semitism, and vice versa,” she said.

On what we can do about it:

We must regain the ability to put ourselves in other people’s shoes, while also acknowledging that we can never know exactly what it’s like, she said. “One of my favorite authors, [Israeli writer] Amos Oz, said he became a writer by observing, throughout his childhood, people sitting in cafes and trying to sneak into their story,” Horvilleur said. “Empathy is the best antidote to fanaticism.”

Horvilleur says she sometimes has to check the gendered language that even she uses with her children. “My 11-year-old daughter, she’s very much into the fight against sexism and spots it everywhere, sometimes even at home,” Horvilleur said. “As a mother, it was a lesson. As much as I am a feminist, I sometimes found myself using the most grotesque clichés, congratulating my [teenage] son ‘for being strong’ and my daughter ‘for being cute.’”

On nostalgia and MAGA:

She said people must strike a crucial balance between honoring the past but not fetishizing it. “We are often caught in a bind between those who say ‘it was better before’ and are dogmatic about it, evoking past greatness, which is often pure fiction, as in the slogan of Trump: Make America Great Again. And on the other side, there’s powerful voices that praise innovation as a virtue in itself… and considers the world of yesterday something to be tossed out.”

On those who justify banning women rabbis:

Horveilleur said she’s wary of any speech that “essentializes” women. “In all religions, there’s this refrain of ‘women don’t need to become priests, rabbis, etc., because they are already wiser and more spiritual,’” she said. “There is a way to praise the feminine and the woman to better lock women in gilded prisons.”

On speaking for ourselves:

No community is a monolith, she said, and we shouldn’t treat it like one. She is troubled by those who try to speak for all those who share their religious or gender identity. “[M]any have started to say ‘we’ instead of ‘I’: we Jews, we gays, we women, we Muslims, etc. As if each of these groups had become monolithic. … The phrase I have repeated the most in recent years is: ‘I am not only Jewish! I am many other things!’”