This Top Kids’ Podcast Tackles Hanukkah in a Delightful Way 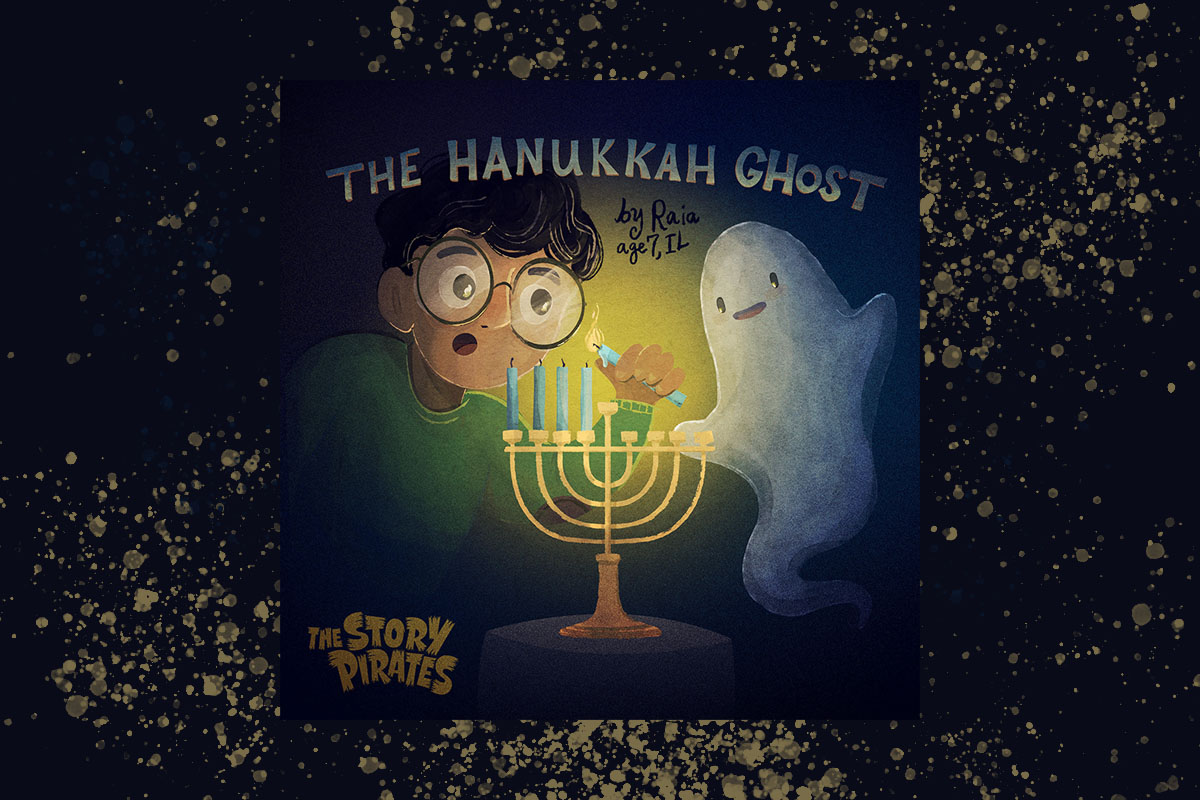 Story Pirates is one of the most popular kids’ podcasts out there. With over 50 million downloads and a crew of dedicated listeners, as well as incredible celebrity guests from Julie Andrews to Billy Eichner, the podcast takes stories written by children and turns them into fun skits.

The last episode of the fifth season, which came out this week, is the show’s first Hanukkah-themed one, and it features a story from Raia, a 7-year-old Jewish day school student from Illinois, called “The Hanukkah Ghost.”

Raia’s mom, Ilyssa Minkus, tells Kveller that the second grader discovered the podcast during the pandemic, when school bussing was cancelled and they needed something to listen to during their daily drives to school. Raia has been listening to it ever since — even going to sleep with a Story Pirates bedtime story each night.

Raia told “The Hanukkah Ghost” story to her mom last February and Ilyssa, her faithful scribe, then typed it up and sent it to Story Pirates, knowing that the show promises to respond to every story they receive. But it took months before they let Raia and Ilyssa know that her story had been accepted.

“The Hanukkah Ghost” tells the story of a family’s experience lighting the menorah, when suddenly a ghost blows their Hanukkah candles out. But before you get too spooked, it turns out that all the Hanukkah ghost wants is for the family to join them for a latke party at their house.

The Story Pirates crew turned Raia’s very excellent story into a song that is both catchy and funny, and that really strays away from any kind of stereotypical elements of Jewish storytelling (well, maybe aside from having the ghost drink Manischevitz). Plus, the song is a total ear worm.

The episode also features an interview with Raia, who tells host Lee Overtree how she came up with the story, wanting to mix her Jewish heritage with her love for spooky things. Raia also tells him the Hanukkah story and explains what latkes and gelt are — and she totally nails it. For kids getting introduced to the Jewish holiday, Raia is a totally worthy guide. The second grader also says she wishes the holiday could last for 17 nights.

Raia spoke to Kveller earlier this month and was excited about the episode, as well as her school’s upcoming Hanukkah concert in which she’s going to sing a bunch of Hanukkah songs — “Sevivon,” “Ma’oz Tzur,” “Ocho Kandelikas” and more. She also told us that she likes to eat her latkes plain, but sometimes with apple sauce.

Her episode also features a non-Hanukkah-related story narrated by Seth Meyers. And fun fact: While Meyers is not Jewish, he does celebrate Hanukkah with his Jewish wife and family. Back in 2018 on “The Ellen Show” he talked about how his eldest son, who was then 2, invents his own Hanukkah prayers: