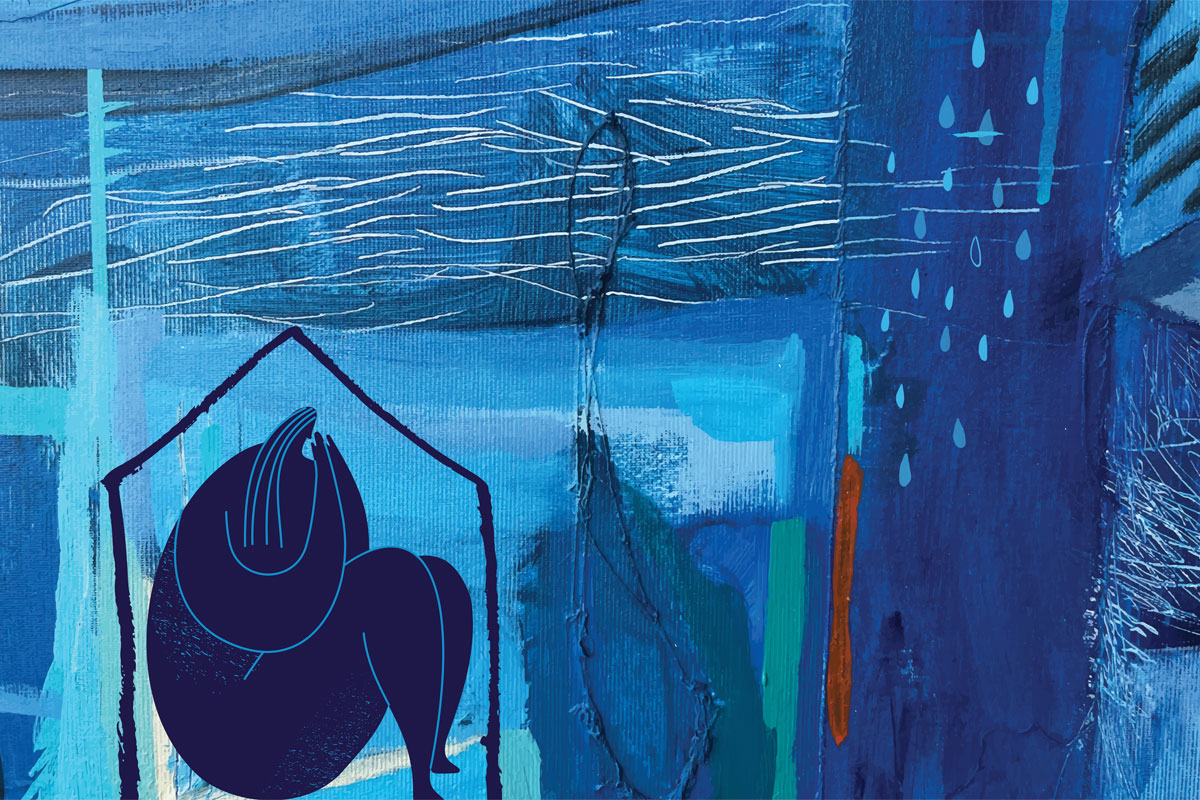 I wasn’t feeling sorry for the chicken. Not at first. She seemed a bit sad and listless in her little travel carrier, which I guessed had been used for cats and dogs, but the chicken had plenty of space to roam and strut, occasionally poking her beak out the little front gate. I watched her while I listened to the young, lean rabbi speak with assertive calm, his monologue practiced and sure.

“It’ll be a minute or two, at most, that she’s out of her cage before the ritual slaughter is done. You probably won’t even hear her make a sound. They’re stunned, usually.”

I looked deep in her glassy, black eyes and wondered about her last meal as I shifted uncomfortably on the cold dust of the amphitheater bench. We were high on the hillside overlooking the Brandeis-Bardin institute, among the first to arrive at Limmud LA. I nudged my husband Daniel, wanting to share the view.

I’d been queasy all morning, since the chilly August sunlight crept into the bedroom; before the alarm could do its job. It was a long ride up to camp, and the demonstration was set to start early. I worried at the hem of my summer dress as I tried to distract myself from self-pity, and I wondered if it was carsickness or anticipatory grief churning in my gut.

There was a crowd of 14, maybe 15 of us, and we were set back from the worktable by a good 30 feet. The rabbi paused and asked if there might be any questions and I wished he would just take the sleek, flawless blade and end this already. There were questions, of course. What happened if the cut wasn’t kosher? Who was going to eat it? What color would the blood be? (Which was the same question I had, but I didn’t want to look.) Of course, I would look anyway because that was the whole purpose of this trip.

The chicken disappeared to the back of the cage and, for a split second, I wondered if she’d found a way out the back, and how funny would it be if they’d bent down to pluck her from the crate only to find that she’d escaped into the brush to live wild and free.

“She’s an old chicken,” said the rabbi. “Probably a good six months past when she should have become meat but they’d had to take her to a vet a few times when she wasn’t producing and that’s when they decided to end her discomfort.”

I saw her again, settled quietly in the back corner.

“This will be quick,” he said. “You can stand up if you’d like and I’ll try to give everyone the best view possible.”

I wanted to bless it, to bless her, to wish her well, but before I could even finish that thought she was out of the cage and lying on the table and the blade flashed green against the tree-lined horizon and there was silence. I thought I might cry, then, but what I felt was nauseous and a little sad and let down by the whoosh of nothing the moment a life ended. I forgot to breathe and then I did and it left me in a sharp rush. Everything went still. I had to sit.

The rabbi’s hand reached within the little pile of feathers as he explained that he was searching for any eggs that might be left within. He pulled out a small tube, yellow and translucent, and pointed at a kind of cylindrical, malformed lump.

“This might have been the source of her woes,” he said. But we’d never know whether her knotted innards had led to her health downturn because she was gone now, and did anyone want to come up close to see the cut? I turned my shoulder and asked Daniel if we might make our way to the rest of the festival, “and anyway I need to use the restroom,” I said with the kind of urgency that led him to crook his arm in mine, working our way east up the footpath.

I knew, even before I looked, that this was the beginning of an end. A terrible feeling washed through me: the sense of physical pain and anticipatory grief, all tangled up in a heaping wave. Daniel squeezed my hand as we gingerly trekked down the hill to the car. It was the quiet, tender reassurance of a partner who worries in silent synchronicity that your shared secret is slipping away.

I lay in the back seat and counted the freeway signs that passed overhead. A nurse with a worried brow at the urgent care sent us up the road to the ER, and I squeezed my eyes shut as they passed a warm wand across my middle. I wiped my face with the scratchy arm of my gown as the diagnosis appeared on the ultrasound in a cryptic acronym. I had to ask what “pregnancy of unknown origin” meant. They said it was the hope of a life that grew where it wasn’t meant to grow, an invisible threat full of terribly unfulfilled promise. I wanted to go back to the place, to the time, when the hope hadn’t yet begun to form.

The hospital room was wide and empty, and if I turned far enough to the right I could watch the late summer sky turn purple against the Hollywood Hills.

“This view,” the nurses would all say. “At least you have this view.”

I searched the horizon for escape and my mind wandered, crouched in a daydream.

I lay awake all night thinking about the chicken and that long yellowish tube and the sad, misshapen egg of unknown origin. How she was free, then, of her burden. Of her life. Of that egg. I sensed a lingering pity in the eyes of the resident who visited me twice a day, inspecting me.

“If it doesn’t, then we’ll scrape it away and you’ll never know it was there.”

I closed my eyes against the fluorescent lights and waited for the whoosh of nothing to pass.

Two days passed, then three, and a nurse came to the room with discharge paperwork. I felt a profound emptiness that followed me home. One sleepless night I wandered down to the kitchen and pulled the ultrasound off the refrigerator door. I thought of the chicken who could not lay eggs and how we had looked at her with pity. I knew, then, that the pity came from our knowing that her story was over.

“My story isn’t over,” I said out loud to myself. And in the strange and magical way that words can build words, that became the truth. I am alive, and full of possibility.