This Yiddish Word Describes How My Sons Have Changed During Coronavirus 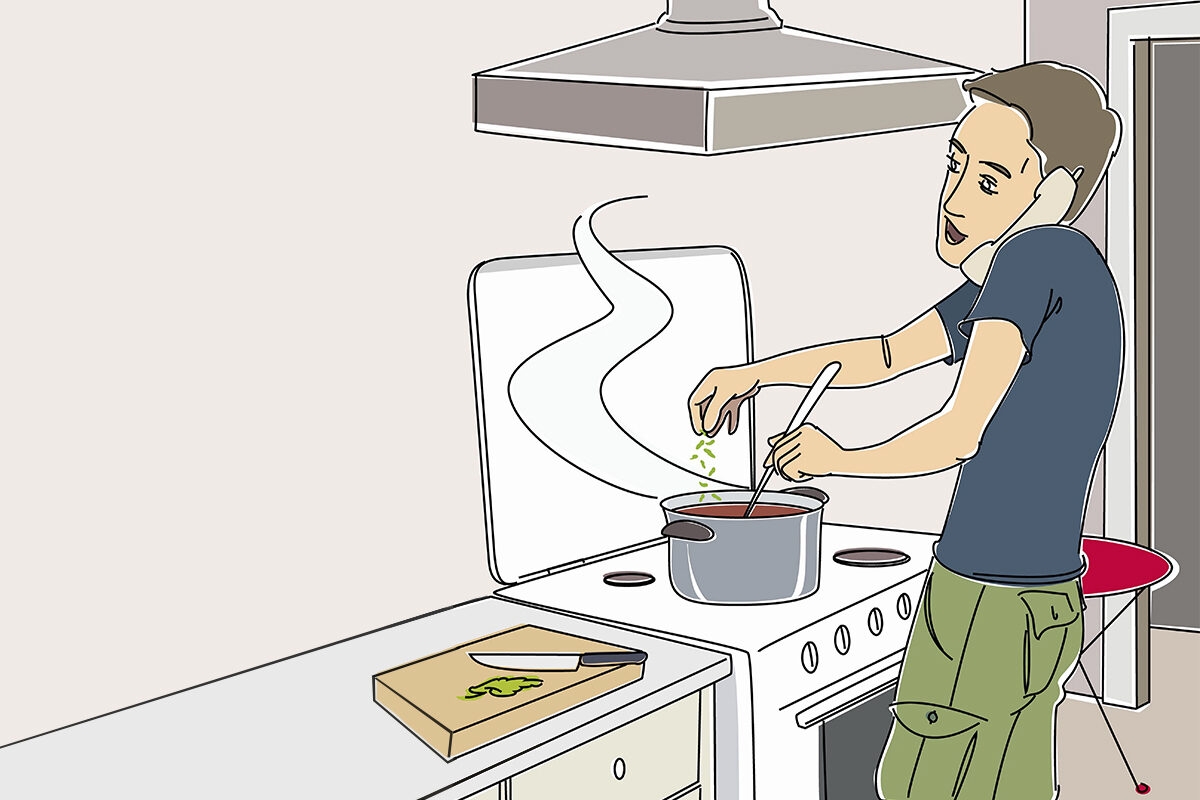 My cell phone rang and I saw a pic of my eldest son appear on the screen. I resisted the urge to yell, “WHAT’S WRONG!?” and answered with an apprehensive, “Hi?”.

“Mom, do I need a bench scraper?” he asked. I checked again to see if it was a wrong number. This one rarely called unless it was a medical emergency and besides, it was 8 a.m. — hours before the time he normally wakes on a weekend. Considering that he usually eats food right out of a takeout container, I was shocked that he knew the name of this obscure kitchen item.

But I realized things were different now. Thanks to Covid-19, everyone seems to be anxious and turning into insomniacs  — conditions that are somewhat ameliorated by stress-eating. With restaurants closed and only limited take-out availability during this prolonged quarantine, people are getting creative about cooking, and learning to be resourceful, to boot. I was surprised and proud that my son was actually preparing his own meals, even if I also worried if this was a sign of the apocalypse.

When my husband and I came down with the virus in early March — one after the other — we took turns caring for each other through fevers, cough, chills (him), and a debilitating headache, sore throat and loss of smell (me). My two 20-something sons had to shelter in place in their apartments — one five blocks south of our home in New York City and the other 15 blocks east. They were each living alone, having recently moved into their own places without roommates for the first time.

I worried more about them than I did myself, as I had prepared by freezing copious amounts of homemade chicken soup and turkey meatballs. I was concerned that they’d run out of food, as others were stockpiling and the grocery store shelves were already emptied of pasta, frozen foods, and all paper goods. I urged them to prepare but they waved me off.

Before Covid-19 put us all under house arrest, my boys rarely had food in their fridge other than a few IPAs, a Brita pitcher, and ketchup. But suddenly they were lining up at Whole Foods to stock their pantries. They were sending me shots of their bounty and asking me how to cook and store their stash. And they weren’t asking Google — they were relying on ME!

I knew things had really changed when my younger son FaceTimed me to debate the pros and cons of different grill pans. Up until the pandemic, this kid had been surviving on dinners delivered by GrubHub and Seamless, expensed to his office.

I grew up with a father who liked to putter in the kitchen. He made salami and eggs for his three daughters every weekend. Now 95, he still makes pancakes for my boys when we visit. My hubby has never made food for our kids, not as much as a PB&J sandwich. He’s just not interested. His dad wasn’t much of a cook, either.

I tried to break this cycle and bought my kids a PlaySkool kitchen when they were toddlers, but they just used the faux produce for epic food fights. I enjoyed cooking for them, trying new recipes, baking my legendary zucchini bread and preparing abundant Thanksgiving dinners and Jewish holiday meals. I always hoped they’d join me in the kitchen to help. But they preferred sharing different interests with their dad like football, golf, and rock music.

I cooked much less after they left for college, but during these months stuck at home I was back wearing my chef’s apron. Now, finally, it was my turn to share my passion — these phone calls about gastronomy were finally in an area I was skilled at. At last, I was the one they wanted to consult with! Truthfully, I’d been envious of the moms who were posting Instagram pics of mother/daughter baking during this crisis, posing with their homemade breads and cookies. I felt like I was missing out.

But now, I’m emailing my sons recipes, and they are showing me pictures of perfectly grilled salmon, sesame crusted tuna, and steak, all seared on the grill pans I happily shipped them.  There was a quesadilla competition between them and one mastered my chicken cutlets — one of their favorites.

I am grateful my kids are older — I can’t imagine having to homeschool children during this time.  I don’t think I would have survived. And yet, I am doing distance learning with my sons. Forget Master Class! They have me — an expert in stain removal, laundry, cooking, and wall patching. I know how long deli meat lasts in fridge, the difference between percale and sateen sheets, and what temperature to use for any type of laundry, although I sometimes secretly use Google as a reference before I give my expert advice. I am so thankful for this time to continue teaching them these life lessons. I thought it was too late.

The Yiddish word balaboosta refers to a woman who runs a warm, comforting home. Without a masculine substitute (balaboosto?) for that word I will just have to say that my boys are becoming mensches. They call more often and offer to do our food shopping so we can avoid public places. They follow the stay-at-home orders and work from home with little complaining. They even phone their grandparents to check on them during this stressful time — without me telling them to.

My boys are facing this strange predicament armed with grill pans, baking sheets, and, yes, even a bench scraper. More significantly, however, they’re proving that they are well equipped with the skills of patience, persistence, planning, and practice  — attributes that are needed for cooking, yes, but also for life in general. They are often choosing to stay in and cook, instead of accepting my offer for food drop-offs or a home-cooked meal.

The other day, one asked me for the mandelbrot recipe that was passed from my grandmother to my mother to me. I used it as bait. “It’s too hard to make,” I told him. “You’ll have to come here and watch me.”

“I know, Mom. It’s just manipulation so I hang out with you but that’s fine, I enjoy that,” he replied.

Yes, my boys may be growing up, but I still have work to do around here. The other day, as I was cooking my millionth quarantine meal, I asked my husband to pass me the olive oil. He looked at me questioningly. I rolled my eyes and pointed to the bottle — which is directly next to the coffee pods he’s reached for every day for the last 7 years. It seems this stay-at-home order could last a while longer yet — perhaps it’s not too late to get him trained, too.