Walking the Beach Is My Favorite Intergenerational Jewish Family Tradition 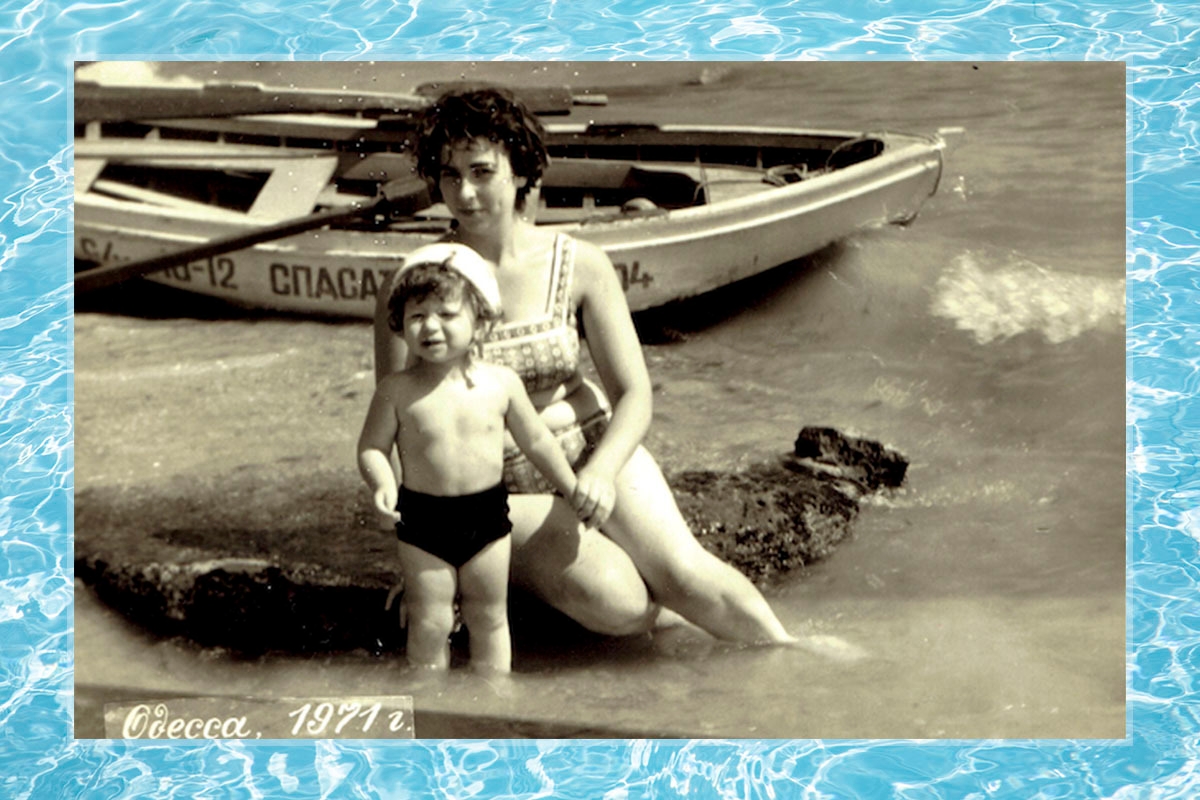 I was born in Odessa, then the Union of Soviet Socialist Republics, now Ukraine. What do most people know about Odessa? They might know about the Odessa Steps — also called the Potemkin Stairs — as featured in the classic silent film, “Battleship Potemkin,” as “homaged” in “The Untouchables,” and as parodied in the Woody Allen movie, “Love and Death.”

Just where do the Odessa steps lead? They lead to Odessa Beach. It’s a key part of the city, where families go to relax, swim, sunbathe, eat, drink and be merry. Which is terrific. Unless you’re as pale skinned as I am — and as pale skinned as my mother is. I had three second-degree sunburns (that’s the blistery kind) before the age of 18. (A key risk factor for skin cancer, yay, me!)

When I recently saw a photo of my mother and me on the beach in Odessa in 1971 (making me a little short of 2 years old), I asked her, “How could you have taken pasty, tiny me to the beach?”

“You had a sunhat!” she pointed out. (True. But what I did not have was sunblock or a bathing suit. In the USSR, little girls go topless on the beach until puberty. This was quite the shock to me when I immigrated to the U.S. at the age of 7 and first went to the pool.) “And I only took you to the beach before 10 a.m., to make sure neither of us would burn!”

By contrast, my father is much swarthier than the two of us. (He has dark hair, dark eyes and a dark beard. It’s why he’s always pulled out of line at the airport for “completely random” security checks.) My father loves the beach. He goes for hours. He likes to sit in the sun until his skin burns and peels. According to him, that’s how you know you’re getting the vitamin D you need. In the USSR, where food was scarce — and fresh vitamin D foods like yogurt, beef liver and fish roe were either too expensive or near-impossible to get — this was considered a vital health activity. (It’s also why I had to take a spoonful of cod liver oil every morning, yay again, me!)

My father had to make do without a beach while our family was living in San Francisco. Sure, the Bay Area has a major coastline, but it’s simply too cold to hang out at the beach. Besides, when you’re a new immigrant working three jobs to support your family (day job, night job and weekend job), your schedule isn’t exactly open for lazy days by the shore.

More recently, however, when it came time for my parents to retire, they opted to move to the East Coast, where my brother and I now live. They could have lived anywhere. In Manhattan next to us, in New Jersey next to him… but they chose Brooklyn. To be more specific, they moved to the very Russian Jewish neighborhood of Brighton Beach, Brooklyn.

That’s not just because, in Brighton Beach, the store shelves groan with the Russian foods of their childhoods — and all the Russian foods they could only dream about in their childhoods. It wasn’t just because everyone in the stores speaks Russian, and everyone in their building speaks Russian. It was because of the beach. My father still goes for hours.

My mother and I don’t. We’re both still quite white. So we go first thing in the morning — before 10 a.m., just like when I was little. We get up, we put on our sun hats and our sunscreen (a delightful luxury now available to us in America), and we walk barefoot along the water’s edge, from the tail of Manhattan Beach, along Brighton Beach, all the way to Coney Island and back, a distance of some three-plus miles. Along the way, we talk. Sometimes about important things. Usually about trivial things. We just talk.

My parents spent their lockdown in San Francisco. Previously, they’d spent six months of their year on the West Coast, six months on the East. They’d been planning to come out to Brooklyn for their regular stay — they had tickets for March 20, 2020. Oops.

Instead, my 14-year-old daughter and I spent last summer in Brighton Beach at their place in order to get away from the crowds of Manhattan and enjoy the socially-distanced beach. (My husband and two older sons went back and forth as their work schedules permitted.) My daughter is African American. She doesn’t burn nearly as readily as I do. And yet, getting her to walk with me in the morning was a non-starter.

The only way I was able to get her out was by detailing all the pretty, scenic photos she could take for her Instagram. (What a cool mom I am! I know what Instagram is! I am, dare I say it, swag? My daughter dares me not to say it — ever.) 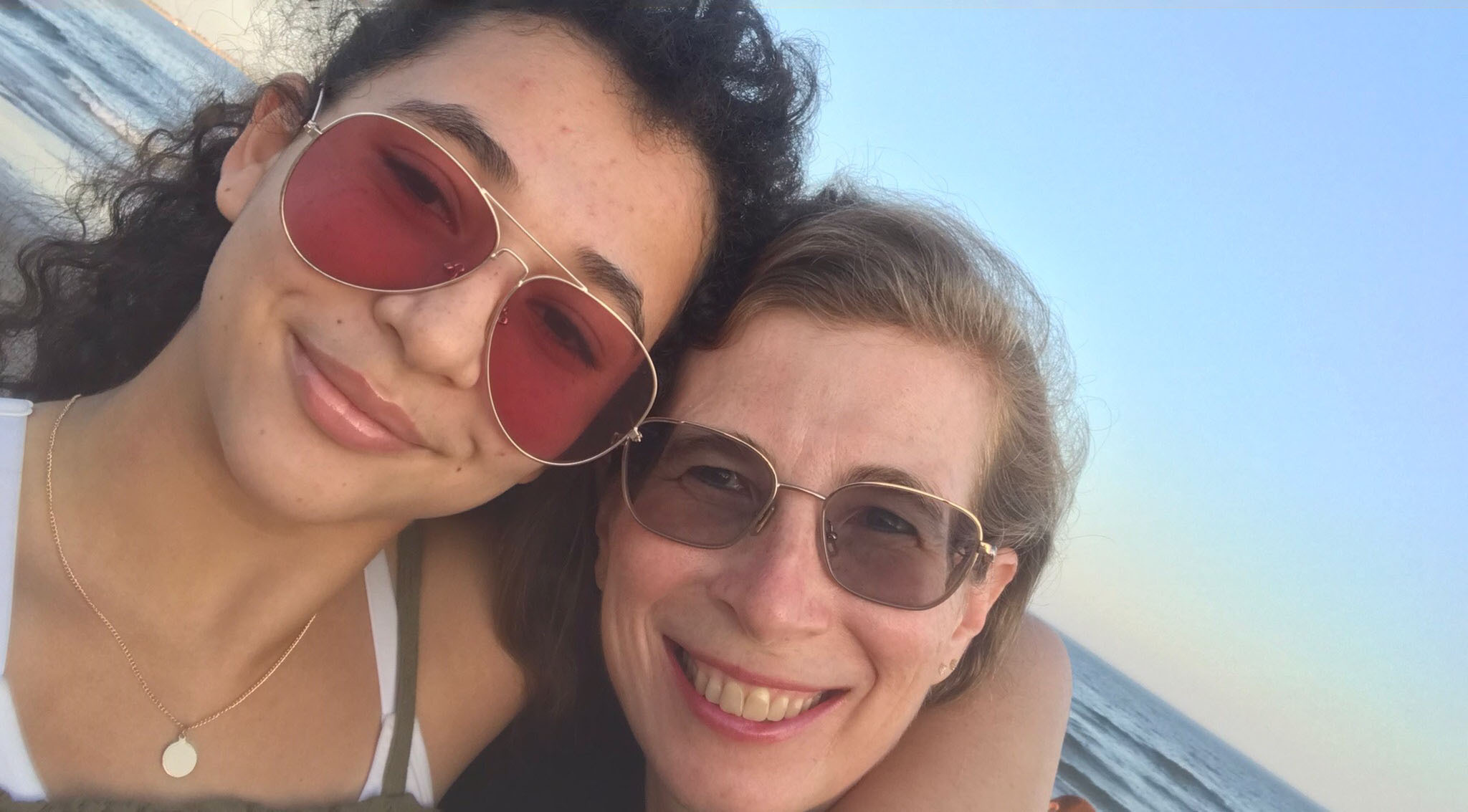 The author and her daughter. (Courtesy of Alina Adams)

There were some compromises. We traded early mornings for the evenings and, during the period just before sunset, known as the “magic hour,” I got my daughter to walk along the beach with me. She’d pose. She’d take photos. She’d make TikToks. (I also know what TikTok is!) And, sometimes, in the middle of that, we’d talk. Usually about trivial things. But sometimes about important things. As I said to my husband, “She’s 13. How many more summers do you think she’ll be willing to hang out with me. This is my last shot!”

My parents are back in Brooklyn. This is now a permanent move — they sold their place in San Francisco. Once they finish unpacking all their belongings, my mother and I plan to start taking our walks again. I’m even optimistic that I’ll be able to coerce my daughter into joining us.

The truth is, there’s something extraordinary about time spent on the beach. When I was writing my family saga, “The Nesting Dolls,” I set the historical portions in Odessa, and I set the present-day section in Brighton Beach. Because when it comes to tying together generations — in a novel or in real life — there is nothing more unifying, more constant, or more primal than the beach. Regardless of the decade, regardless of the continent. The beach is where mothers and daughters go to talk, from one generation to the next.