Warning My Black Jewish Son About Racism (While Being White) 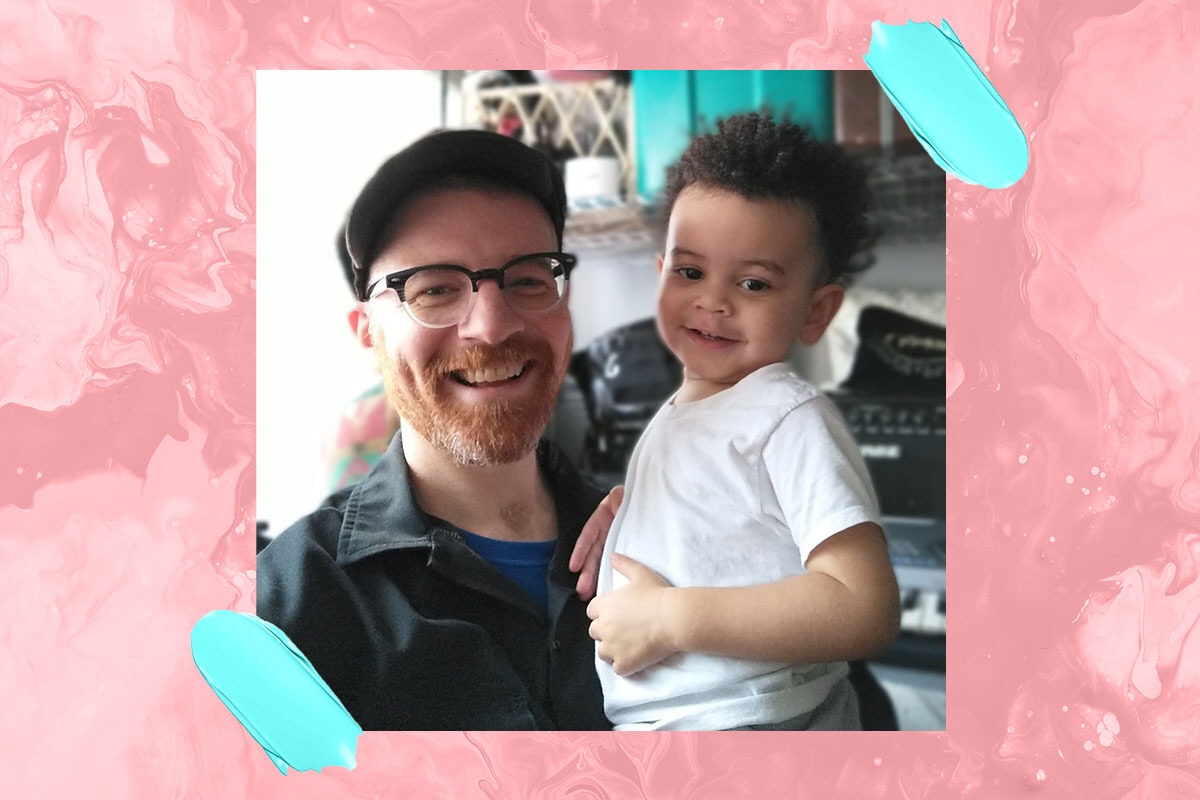 When I fell in love with my wife several years ago, I could accurately foresee aspects of our future life together: finding our first apartment and celebrating its gag-reflex-inducing avocado bathroom tile; snuggling together on rainy mornings, listening to the droplets rinse our bedroom windows; having mini-panic attacks when the check came on date nights but knowing it was worth the hit to our bank account; making Havdalah over Coors Light because we’d drank all of the wine the night before.

But until my wife told me she was pregnant, there was something I definitely hadn’t anticipated: having to tell my son that there are people, severely broken people, in the world that hate him — not because of anything he did, but simply because he’s Black. To make matters more confusing, some of these people wear badges. To make matters still more confusing, some of these people look exactly like me.

My wife and I have more in common than any couple I know. We’re both jazz and soul musicians — I’m a bassist, and she has the most velvety contralto voice I’ve ever heard. We both like to nerd out on sci-fi; I’m more Return of the Jedi while she’s more a David Tenant-era Dr. Whovian. We’re both Jewish — I like to dig my nose into Sichos HaRan, the sayings of the Hasidic Rabbi Nachman of Breslov, while her recitation of the Shehecheyanu prayer is always the loudest for anyone’s first aliyah. We also both think Terry Crews played the best movie president.

Still, there is one glaring difference between us. I am a white man — a “ginger,” to be more epidermically specific. My wife, on the other hand, is a Black woman — though she refutes that claim, saying, “I’m not Black — I’m mocha.” Because of this, our son, who is now nearly 2, has a gorgeous caramel complexion and hair that keeps itself in the tightest corkscrew spirals when dry and hanging well below his eyes when wet.

Many years ago, my wife’s younger brother was stopped by police, along with many of his fellow Black friends, on their way home from the neighborhood baseball diamond.

What seemed like a simple question was tainted with a degree of hostility, as the members of the group plainly donned team caps, mitts, and baseballs. Had the question been asked in the movie The Sandlot of the ragtag boys, the officer’s judgment would have been on trial instead of the true intent of his question. My brother-in-law answered his query respectfully, as well a barrage of accompanying questions, one more disorienting than the last. The interaction left him shaken and confused, leaving most of the group with the same question: Would the officer had stopped us if we were white?

Unlike many others that ended tragically, this story about his unpleasant interaction with police ended peacefully — though it certainly didn’t imbue the young boys with much trust in police. Upon hearing this story around the time we began dating, a fuller spectrum of my responsibilities as the parent of a Black child came into view. For his own safety, I would need to not only teach my son about racism, but actively warn him about the bad apples of our society — some of whom wear badges, and most of whom look like me, Dad.

The good news is that I have time to impart this lesson, as he’s only 2. The bad news is that I don’t know when to teach him — nay, warn him about racism. Upon asking my wife when she was “taught” about racism, she draws a blank. Her first experiences were mostly second-hand — an instance from a family friend in the grocery store, or a grandma’s sage commentary on a news story, explaining what the anchors can’t. Later, racism, for her, wasn’t so much in a single event as felt in the chill of icy stares.

Her descriptions of being stared down, and family instances of being treated in a second-class way because of their skin tone, increase my desire to warn my son about the existence of racism sufficiently — and lovingly. My greatest fear is my son experiencing racism unprepared, only to even momentarily second-guess whether or not to take refuge in my arms because they bear the same complexion of the person, or people, who hurt him. The thought of warning him about the harm that may come to him from someone that looks like his Opa, his uncle, or me, makes my guts sink. The only thing lifting them back up again is knowing how completely and madly in love we are with him. My prayer is that such love eclipses any possibility of fear or doubt.

So, when will I sit him down and have “the talk” about racism? Though the Talmud instructs fathers to teach their sons how to swim, it’s mostly silent on the subject of enduring racism. The timing of such talks will likely precede the “birds and the bees,” but I can’t tell you for sure. Being that he’s currently preoccupied with eating Cheerios by the fistful like a barbarian king, drumming his hands on every surface he walks by, and convincing us that he can count to 10 by starting from six, I’m happy to report that racism is not on yet on his toddler radar.

When we will have this discussion remains a question requiring perpetual conversation with my wife over a cool drink while our boy stacks his blocks to the sky. Our mutual readiness, combined with heartfelt prayer and careful attention to the marvelous array of questions that fill his beautiful corkscrew-curl-covered head, will all guide our timeline for “the talk.”

I don’t intend to make him afraid of all police, but simply to smell the bad eggs before they crack in his path. Still, this isn’t a conversation anyone should have to have with their children. How many more minority generations will have to endure the broken bullies of our society? Until then, I can only do what any parent can for their children — prepare him for the world as best I can and displace the hate with love.

Header image courtesy of the author