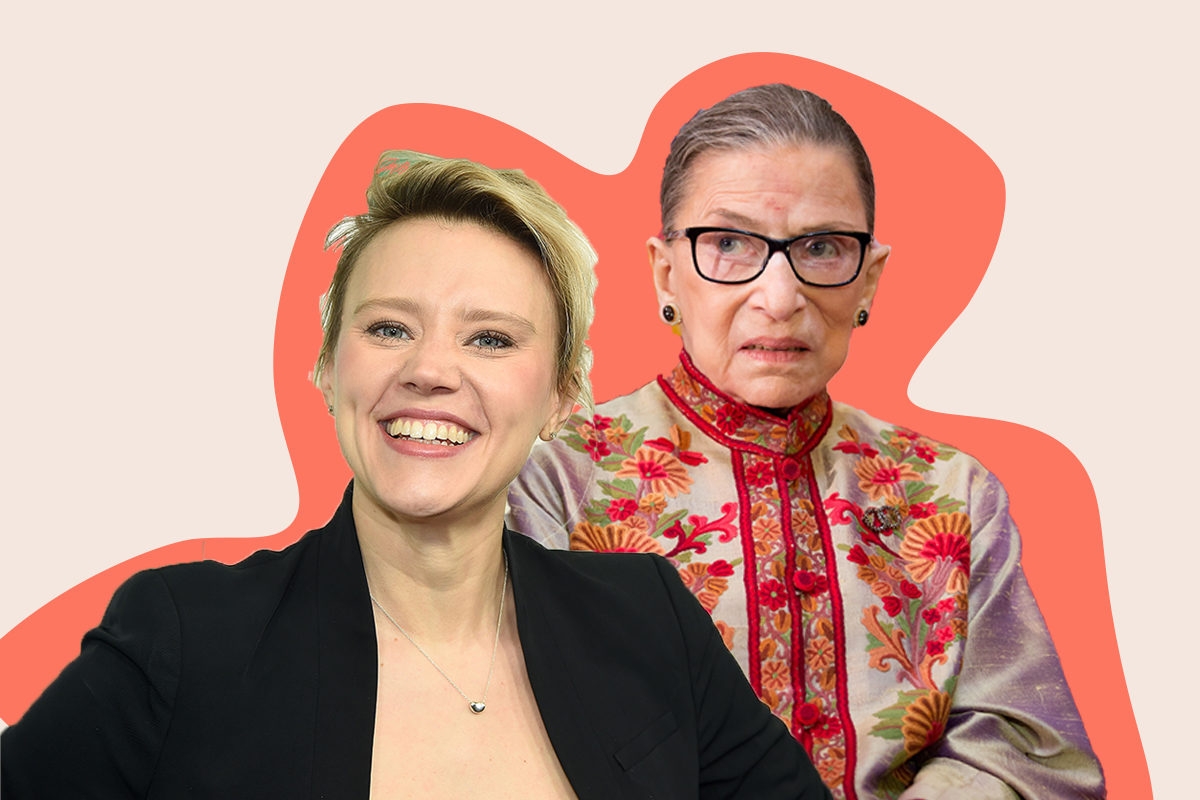 The iconic Jewish Supreme Court justice, 86, took in the musical with a signature scrunchie in her hair. Also in attendance? The inimitable Kate McKinnon, who plays RBG on Saturday Night Live.

There’s even more reason to kvell tonight at Yiddish @FiddlerNYC. Ruth Bader Ginsburg and Kate McKinnon are sitting behind my mom and me. 😍

At one point during the show, McKinnon went over to greet Ginsburg. This was the first time the two had met — even though she’s played Ginsburg on SNL for a few years now.

At @FiddlerNYC and Ruth Bader Ginsburg is here! And Kate McKinnon just shook her hand!!! In all seriousness, this is a show that all #SCOTUS, judges, government officials should see. #seeingdouble #fiddlerontheroof #empathy #refugees #immigrants pic.twitter.com/6rdCvNpb6k

And yes, McKinnon was obviously starstruck over meeting Ginsburg:

Ginsburg is familiar with McKinnon’s impression of her — in a 2018 interview, she said, “I liked the actress who portrayed me, and I would like to say ‘Gins-burn’ sometimes to my colleagues.” (Could you imagine?!)

Actor Bobby Underwood, who plays the constable in Fiddler, shared a series of photos and videos on his Twitter feed. He joked, “It was an honor kicking the Jews out of Anatevka in front of you.” (The constable, for those unfamiliar with the story of Fiddler, is the one who tells the villagers they have three days to pack up and leave.)

The phrase “needs no introduction” applies here, but I’ll introduce her anyway: Supreme Court Justice and all-around American hero #RuthBaderGinsburg came to @FiddlerNYC tonight. It was an honor kicking the Jews out of Anatevka in front of you.#rbg #fiddlernyc #yiddishfiddler pic.twitter.com/O0YbgIsU8P

#RuthBaderGinsburg came to @FiddlerNYC tonight! I have finally found an appropriate moment for me to say, for the first time, “I can’t even. I’m dead because I just can’t right now.” I may never wash that hand again.#yiddishfiddler #fiddishyiddler #fiddlernyc #rbg #notoriousrbg pic.twitter.com/n4OxTDMpek

Ginsburg and McKinnon took a photo with the cast and crew after the show:

And went backstage together:

The Notorious RBG Ruth Bader Ginsburg, and Kate McKinnon visited Anatevka both on the same night. They had never met before…what a moment to witness in our little shtetl! Joel was a great host! #fiddlernyc, #brushwithgreatness, #onceinalifetime, #livinglegends