When It Comes to Both Judaism and Disability, My Family Is Forging Our Own Way – Kveller
Skip to Content Skip to Footer

When It Comes to Both Judaism and Disability, My Family Is Forging Our Own Way 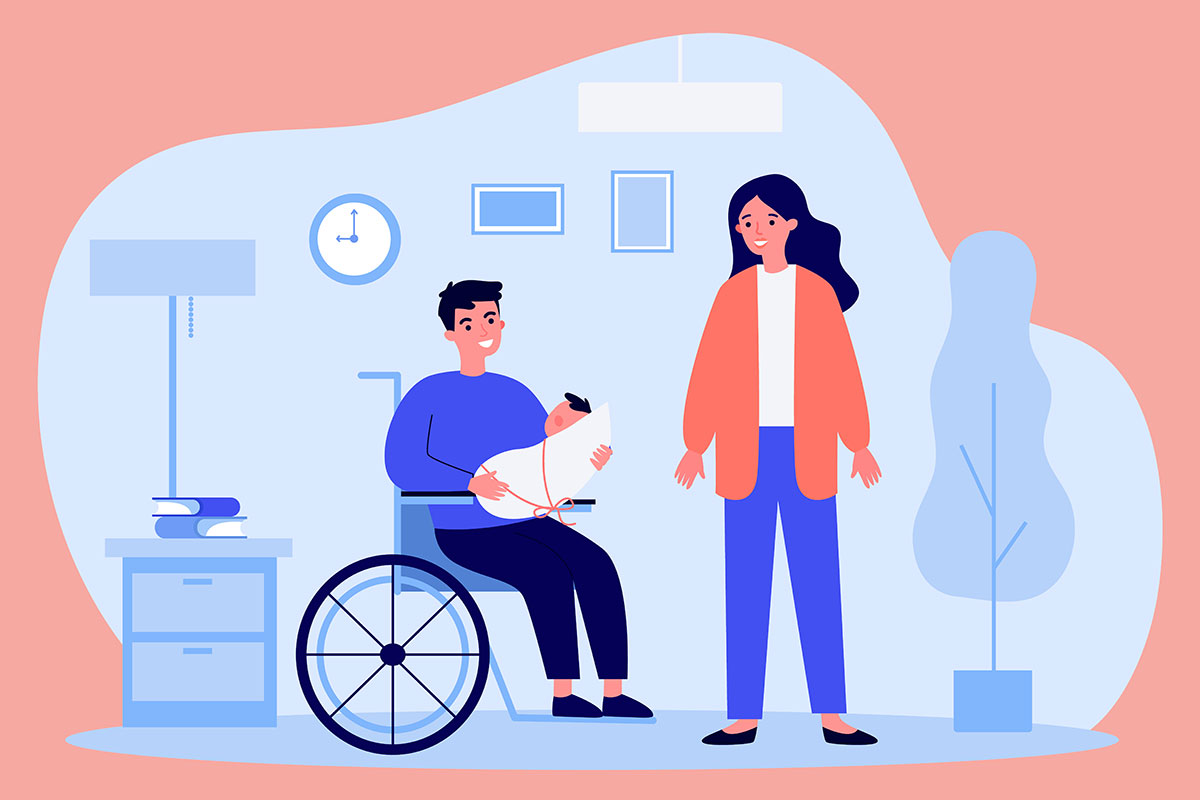 For a long time, I felt angry that I had to start from scratch when it came to my Jewish practice. I didn’t have a grandma with a chicken soup recipe, or a family heirloom menorah — I had no treasured Jewish memories of summer camp or Shabbat dinner. Coming to Jewish practice as an adult left me feeling like I had to work twice as hard to feel Jewish enough.

Meanwhile, my husband, Max, was born with cerebral palsy, as a result of a difficult and traumatic birth. His childhood was happy and full, but he missed out on a lot of typical experiences because while the other kids were playing, he was at endless physical therapy appointments. After more than five years together, there are still moments when I forget that he hasn’t experienced things I’d grown up thinking everybody experiences, like the simple act of tying your own shoe.

Caring for Max has always been part of our relationship, right from day one, and it has always been intertwined with our love, steeped in romance as well as rooted in everyday survival. Under the chuppah, I brought the kiddush cup to his lips as well as to my own. We both drank the wine.

Max’s Austrian Jewish grandmother loved Christmas. She loved the tree, the strudel, the carols. Despite her family assimilating into Austrian culture, she still had to flee Vienna as a teenager, eventually ending up right in the middle of England. Proud of his heritage, but without a clear picture of what living Jewishly could look like, Max first allowed me to drag him to synagogue in 2017. I’d been practicing for a few years but I didn’t want to force my new boyfriend into religion, even if it was one he had ancestral ties to. I loved Judaism but tried to hold back from turning onto a one-woman Reform Chabad, coaxing lapsed Jews back onto the derech (path).

Like anyone who sets foot in a new place where everyone else seems to know one another and know what to do, he was at first wracked with anxiety. When Max is nervous, his body betrays him, spasms overtaking his limbs and tightness preventing him from concentrating on anything other than trying to stay upright in his wheelchair. But by the time we got to the end of the Shema, his tightness had left him, his arms were calm and he was able to submit to the rhythm of the service both familiar and utterly foreign.

There we were, two Jews with no background in Jewish practice, unmoored in a sense but carried along by the ebbs and flows in the tide of communal prayer.

My friend Rabbi Deborah Blausten once pointed out that in a way, I am lucky not to have the baggage of a Jewish upbringing. Certainly, we have felt that in making our own Jewish home, we are fortunate to avoid the ubiquitous “well, my family always did Shabbat like this!” and “my family calls it Shabbos, not Shabbat!” arguments. Instead, we’ve created our own family traditions: watching the shadows dance across our living room wall as the Shabbat candles flicker ever lower; listening to Spotify playlists of Jewish music by all our favorite cantors and Jewish musicians; lox and cream cheese on challah for Shabbat breakfast.

I’ve spent a lot of my adult life feverishly teaching myself all of the Jewish recipes I felt I had missed out on as a child: blintzes for Shavuot, challah for Shabbat, shakshuka, pita, sabich, cholent, chicken soup — a whole grimoire of edible magic to heal and enliven the spirit. I’ve cooked them and cooked them until it no longer mattered that my grandmother never did. My family is nourished by my Jewish food; it’s in our tummies, it’s in our blood.

In March 2021, we became parents for the first time. We always knew it was going to be tougher for us than for two able-bodied parents, but like all first-time parents, we had no idea what was about to hit us. Max can’t pick up our baby, he can’t feed him, he can’t get down on the floor to play with him… there’s a long list of things that Max can’t do.

This difficult starting point allowed us to let go of society’s expectations for what a family should look like, or how parents should care for their babies, and instead do what works for us. Our baby is exclusively breastfed, not because we have a problem with formula milk or bottles, but rather because having a completely portable food source that requires no sterilizing or mixing is much more convenient for us. Similarly, we have been co-sleeping since our baby was a couple of weeks old, because when there’s only one parent who can feed or change the baby, having him anywhere but right next to you just doesn’t feel practical. Our lactation consultant helped me learn to breastfeed while lying on my side and encouraged us to research the Safe Sleep Seven, and we honestly haven’t looked back.

Now that our little one is not so little (he’s been out as long as he was in, at the time of writing this), he sleeps between us and it is such a lovely way for Max to bond with our baby, on the same level as him, where nobody can fall or get hurt. Bedtime is family time for us, and we even sneak in the occasional Hashkiveinu and Shema. Of course, breastfeeding and bed-sharing aren’t new — in fact, they’re more ancient than the Torah itself — but in the modern capitalist world we are encouraged to get our babies to be independent and separate from us as quickly as possible, which works for a lot of people, but not for us.

Disability can appear to be constraining in many ways, mostly due to society’s lack of understanding and compassion, but Max’s cerebral palsy has also given us the freedom to adapt and blaze our own path. We see the mitzvot and traditions of Judaism in much the same way. The creativity and beauty that we are afforded as a result of our choice to live a Jewish life is immeasurable, even more so because we have had to forge our own path through it all, learning and growing as we go.

I hope we can give our little one the Jewish childhood we both missed, but I also hope that he learns from us the power of creative thinking, problem solving and adaptability, so that one day he can blaze his own amazing little path through life.