Why Does Kim Kardashian Have This Strange Jewish Amulet? – Kveller
Skip to Content Skip to Footer 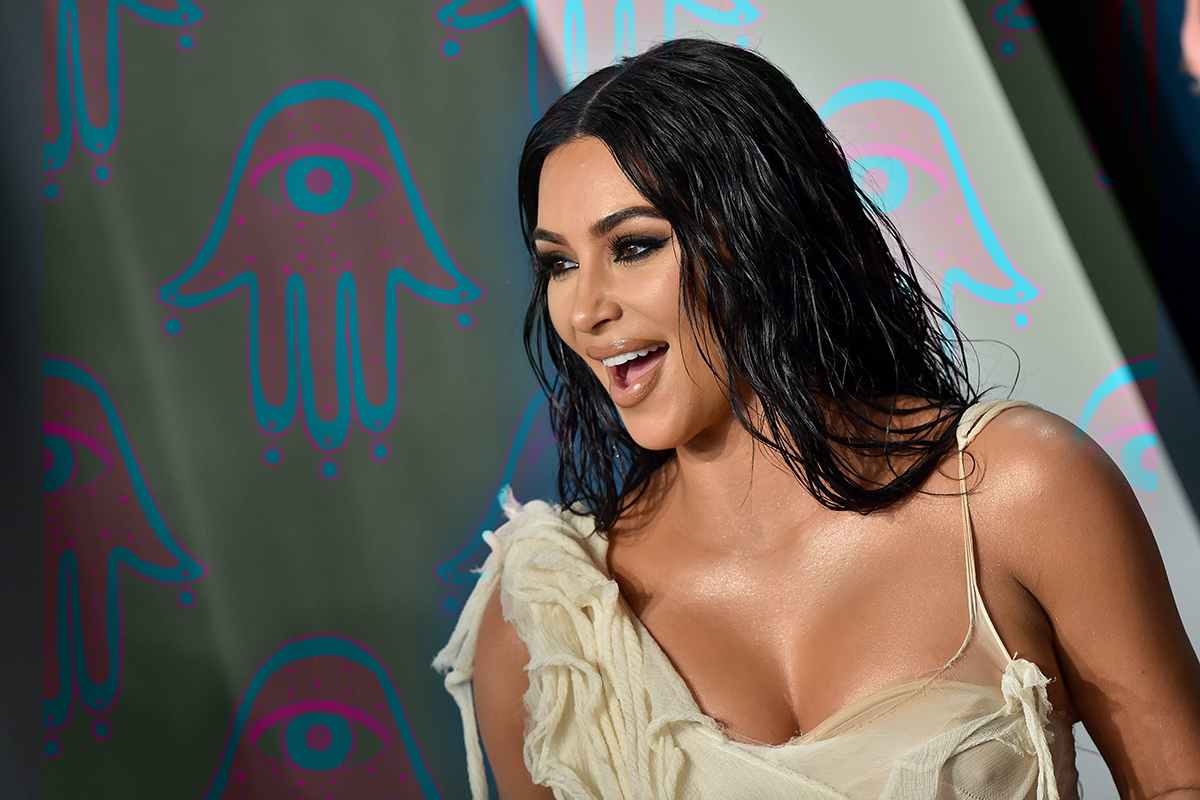 I love Jewish amulets. Hamsas, red string bracelets, key chains with the traveler’s prayers, evil-eye pendants…  I simply can’t have enough of them.

Recently, another fairly familiar Jewish amulet piqued my curiosity. It was found, of all places, in Kim Kardashian‘s Instagram stories — and it immediately caused some confusion online.

The amulet was apparently sent to Kardashian by LA-based jewelry designer Jacquie Aiche — possibly because she knew that the mega-famous reality star was facing a rocky time and an impending divorce from rapper and former presidential candidate Kanye West.

Accompanying the amulet was some sort of pamphlet, headlined with the word “Blessev” — in English, but using  Hebrew letters to spell the word — a personal pet peeve of mine. (Many observers spent a considerable amount of time trying to decode the Hebrew, only to realize the word was in English. If you read the Hebrew letters in the same order, by the way, it would say kraplerafa — obviously, not a word.) The text instructed the amulet’s owner to find a “quiet and comfortable place,” and to “focus on your wishes an [sic] aspirations.”

What came next, however, made my head explode.

The note urged the amulet owner to chant “na nach nachma nachman meouman” silently or out loud for 15 minutes each day and “watch your miracle unfold.”

Now, growing up in Israel, this “na-nach” line is very familiar to me — and it’s definitely not something I associate with the Goop-y, Moon Juice-drinking, New Age-y crowd that this amulet seems to be marketed towards. (Hey, no judgment! I spend way too much money on ingredients for my homemade smoothies.)

It’s a phrase you find graffitied all over Israel, and it’s something frequently heard blasting from speakers, as crowds of Hasidic men climb onto the roofs of their vans and enthusiastically dance while stopped at an intersection. These men, members of a subset of a subset of Hasidim — more on that below — are known as Na Nachs (nanachim in Hebrew). And yes, it’s also a line found on amulets, though in Israel they’d set you back about $30, whereas Aiche’s versions range from $225 to $615.

The amulet on Kardashian’s Instagram is part of Aiche’s “Blessev” collection, which is a collaboration between the designer (whose father was an Egyptian Jew), and Sylvain Sellam, a Jewish mystic from France. The name, “Blesslev” — which is a combination of the word “bless” and the Hebrew word for “heart,” lev — is an allusion to the Breslov Hasidim, a Hasidic sect that follows the teachings of Rabbi Nachman of Breslov, who died in 1810 at age 38. Nachman was the great-grandson of the Baal Shem Tov, the founder of Hasidism.

As it happens, the famous “na nach” line was actually never spoken by Nachman himself. As the story goes, Rabbi Yisroel Ber Odesser claims to have received a “Letter from Heaven” from Nachman — more than a century after his death —  that included the iconic phrase, which he claimed would heal the world’s suffering.

Due to these dubious origins,  not all Breslov followers use or believe in the mantra. Generally speaking, though, the Breslov sect is quite a passionate and devout one, and their annual pilgrimages to the rabbi’s grave in Uman, Ukraine, have become quite famous — or, rather, infamous during the time of coronavirus. (The show Mekimi which you can stream on Amazon Prime, is based on the life story of Israeli writer Noa Yaron Dayan, who converted to be the Breslov sect.)

Whatever your feelings about all of this, it’s clear that the Breslovs and their traditions cannot be neatly summed up with this one, fancily marketed line — which, I should note, is sold alongside an $815 ring that says “Fuck” and a $3,250 dagger cross necklace (and also some seriously gorgeous, if hella expensive, hamsa necklaces).

It’s funny to see the “na nach” mantra on the Instagram of one of the most followed celebrities in the world. It’s not likely that Kardashian will ever know much about the teachings of Rabbi Nachman. The Blesslev marketing materials do not seem to acknowledge the phrase’s Hasidic, Jewish origins. Instead, it’s labeled “kabbalistic,” which some would argue is a term used to… dare I say?…  appropriate some Jewish customs, or at least detach them from their very Jewish roots.

We can’t know if the amulet and Jewish mantra will do much of anything to help Kardashian in her reported divorce from West. Fortunately, however, she has another Jewish guru to lean on: badass divorce lawyer-to-the-stars, Laura Wasser. You may have watched a fictionalized version of her in A Marriage Story. Wasser represented Kardashian in her previous divorce from Kris Humphries, and while she comes at a much higher price-point than the Blesslev amulets, she is a confirmed miracle worker.