These 5 Jewish Amulets Are Perfect for Expectant Moms 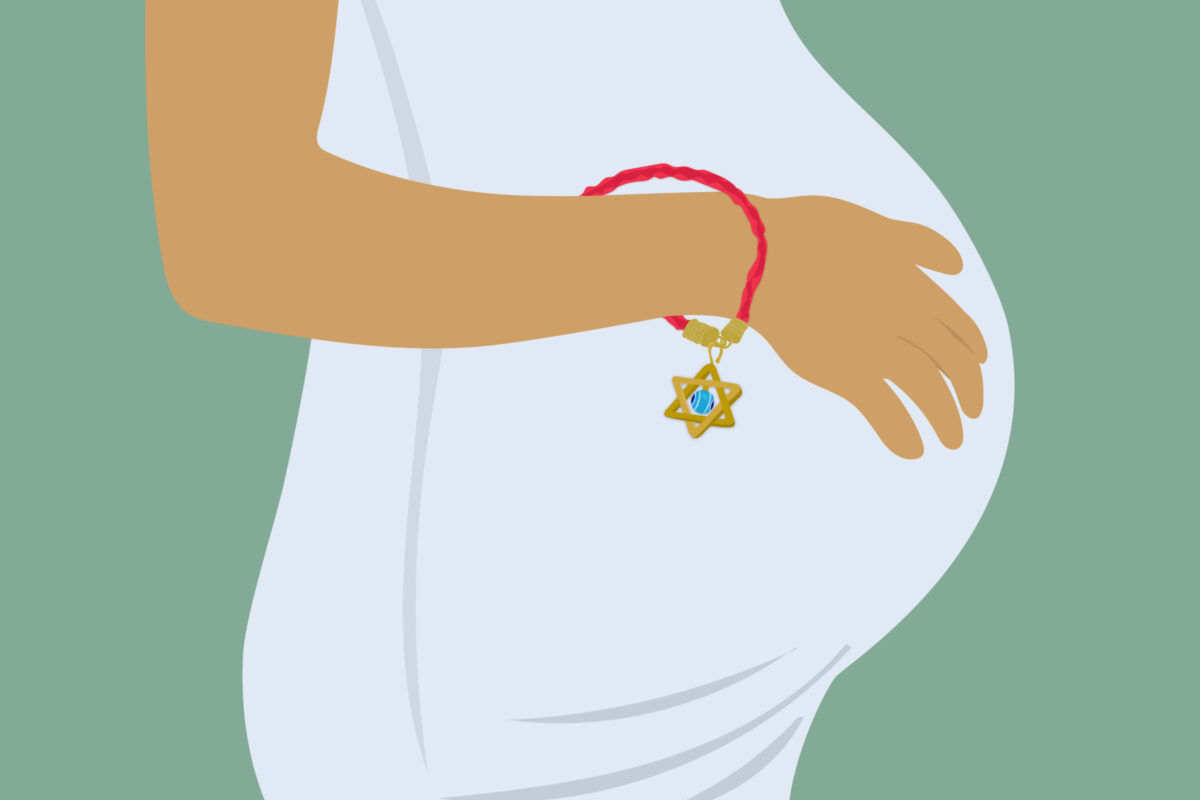 When my husband and I lived in North Dakota, I became pregnant with our son. We were far from my family and I was scared.

I was one of three rabbis in the entire state, as there are only three small, tight-knit synagogues there: a Chabad and a Reform synagogue in Fargo and another Reform synagogue in Grand Forks. Living in North Dakota was a strange and isolating time in my life. I missed my support systems and the comfort of my Jewish communities in upstate New York, where I’m from, and Philadelphia, where I had lived previously. It was also my first pregnancy. I wanted something tangible that would comfort me and help me feel closer to my family.

So I asked myself: What my Jewish ancestors would do? Ideally, I wanted something that women would have worn during childbirth for protection. So I went to my bookshelf, and I found a book on Jewish birthing traditions and folklore. I thought, “Aha, I need an amulet!” I wanted to read everything I could about them.

The Jewish belief in the healing powers of amulets goes back thousands of years. Mothers, in particular, were afraid of the demon Lilith, according to the 9th-century text “The Alphabet of Ben Sira.”  It was thought that the most powerful amulets were written ones containing the names of God and/or angels — one such example, found in the Cairo Geniza, invokes the name of God to protect against “any of those seven spirits that enter the entrails and spoil their offspring.”

I learned that women were often involved in amulet making, too, and although our sages were against witchcraft, they still acknowledged that people were going to use them. So, in the Talmud, the rabbis gave exceptions for the use of amulets in a variety of situations, including childbirth. On Shabbat, for example, amulets could be used and carried, so long as they were “proven effective.”

My research made my heart sing. I loved that, for centuries before me, Jewish women had used amulets as a way of asking for protection during childbirth. I also loved that I could bring the amulet into the hospital with me and that it would help me feel safe. Knowing that Jewish women for thousands of years had similar talismans was comforting.

Being a rabbi, I also have a passion for Hebrew; I enjoy looking at the grammar and learning more about the different uses for different psalms and liturgy. So of course I was curious about which verses were associated with which kinds of amulets.

Once I had a sense of what kind of amulet I wanted, I still had the problem of not knowing where to find one. It’s not as if there was an amulet store in North Dakota. So I did what anyone does when they find themselves longing for something that’s not readily commercially available: I went to Etsy.

On the site, I did a general search for Jewish amulets. Because I like to be very thorough, I browsed through many, many pieces of jewelry until I found one that stood out because it was made of Jerusalem stone. It came from Israel, a place that has traditionally held the concept of messianic times or at the very least hope for a better future. Jerusalem was a place that my ancestors couldn’t have imagined visiting, and it is a place I hold dear in my heart.

It was like I was able to hold just a tiny holy spark. Having this little trinket helped to give me the peace of mind and confidence that I needed. It was the connection I was searching for. This amulet was a historical and cultural bridge between the past and present.

Many contemporary Jews don’t know about the long history of talismans within Jewish history and tradition. The wearing of amulets is mentioned as far back as the Talmud. Society’s acceptance of their usage and healing powers has waxed and waned depending on the community and the time period. In our current time, during a pandemic, I think so many people could benefit from the sense of protection and calm that they can bring.

Through my research, I was surprised by how many amulets surround Jews in our everyday lives. If you are looking for a talisman to wear during labor — or anywhere, anytime, really — in these turbulent times, you couldn’t go wrong with any of the following:

How many times have we seen someone wear a red string?  The color red was thought to keep away evil spirits within popular Jewish folklore. If one wanted a simple amulet to wear in the hospital one like this would be perfect: 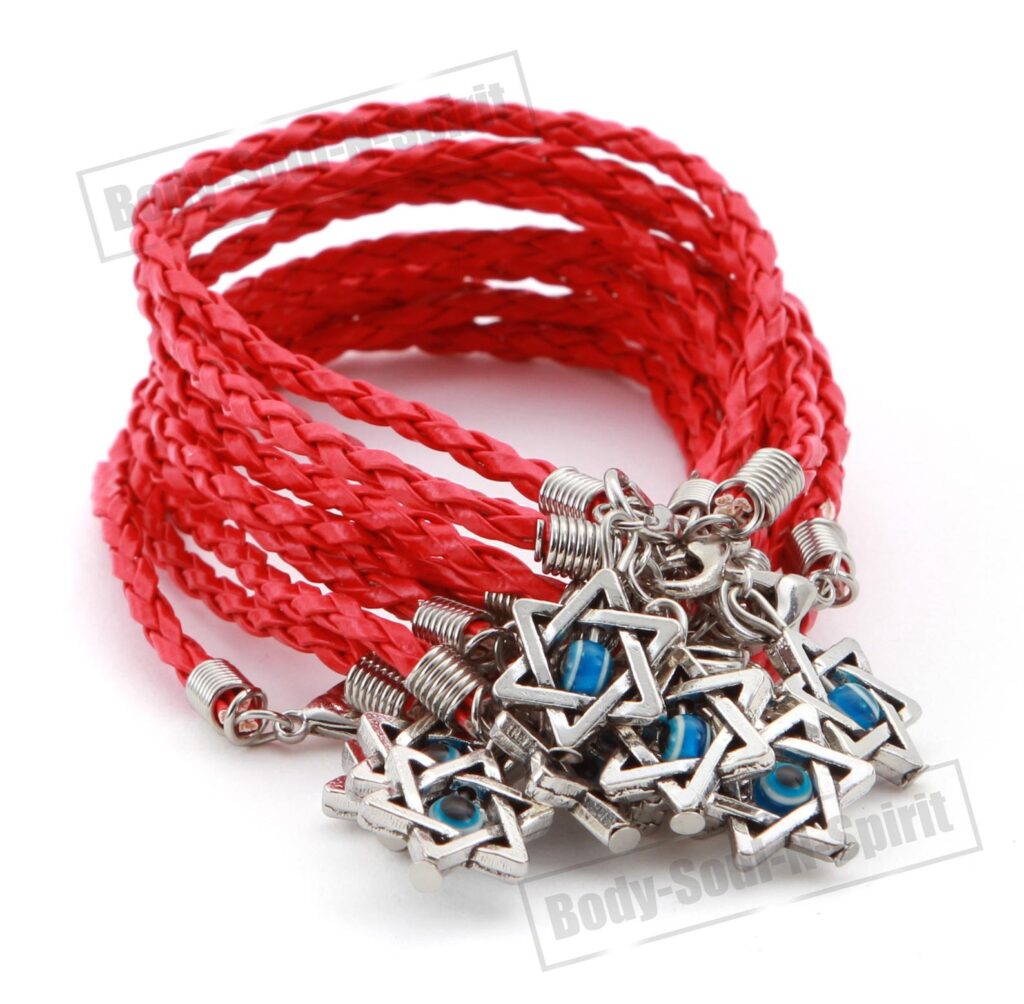 You might notice that this string is adorned with blue eye charm and a Star of David. These are also talismans. The color blue is thought to ward off danger, and the blue eye represents the evil eye. The Star of David is also seen as a good luck charm whose purpose is to protect against any harm that may fall upon the Jewish people.

This is the exact amulet that I wore in the hospital. This talisman contains a line from the piyyut (Hebrew liturgical prayer) “Shalom Aleichem,” which is traditionally sung on Shabbat. The verse inscribed on the pendant — which is made from Jerusalem stone — comes from the last line of the piyyut, which translates as “For God will direct his angels to guard you on all of your life’s paths. Adonai will guard your coming and going from now until forever.” Interestingly, this last line isn’t one that many Ashkenazi communities traditionally sing. However, it is commonly sung in Mizrahi communities. I found the thought of angels watching over me incredibly comforting when I was in labor. 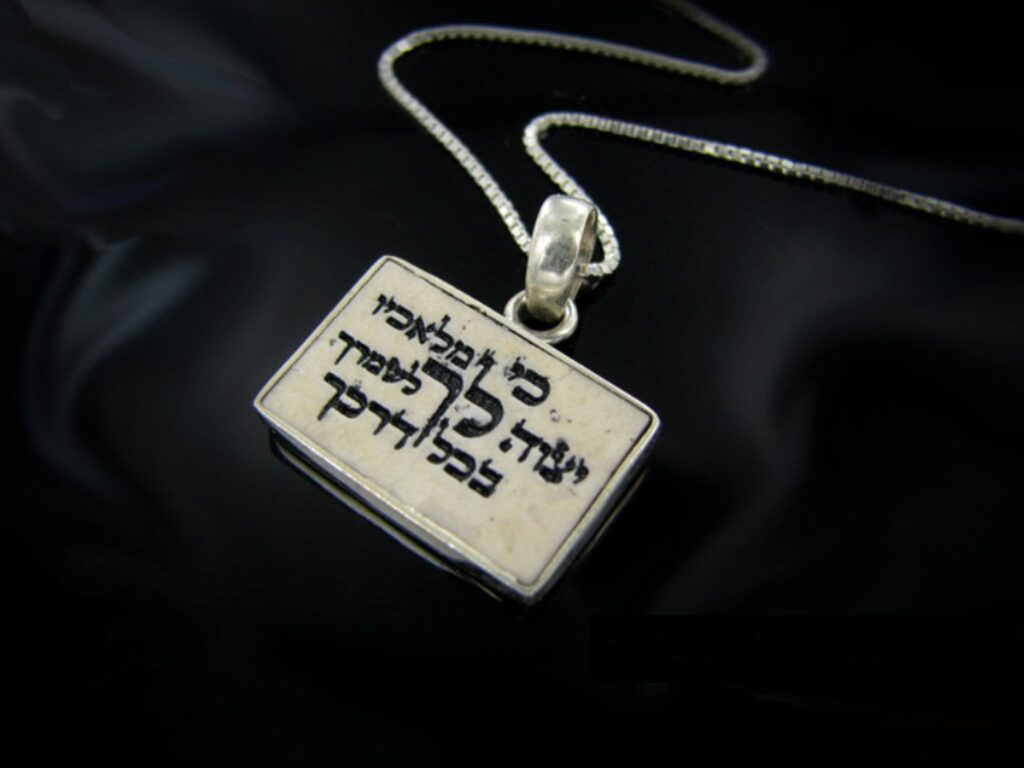 Ana B’koach is another piyyut that is sung traditionally on Friday nights. The Kabbalists believed that this prayer had a secret, coded message about the creation of the world; it was seen as a powerful incantation due to it containing the 42-letter name of God, concealed within the first letter of each word in the prayer. This stainless-steel pendant has the beginning of the prayer engraved on it; given it’s mystical connotations it’s easy to see why this is considered a powerful amulet for childbirth. 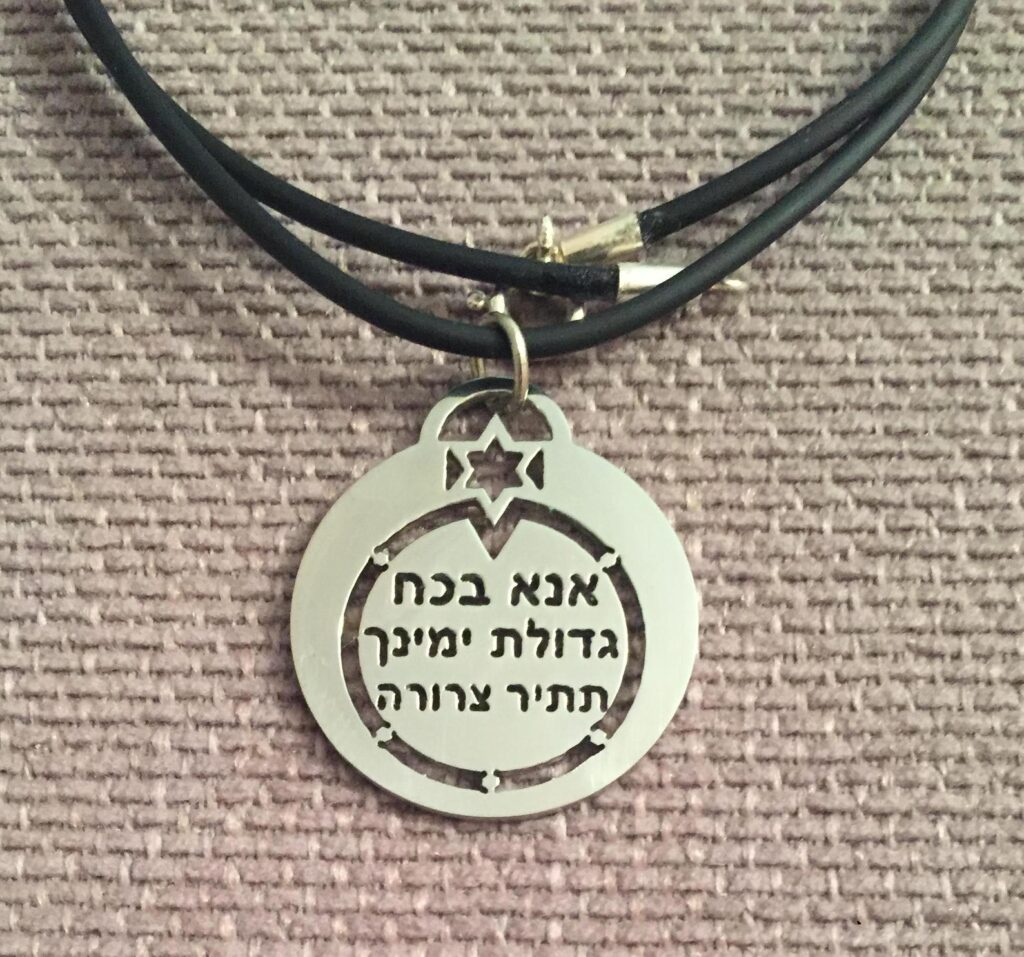 Yes, this is probably the most common Jewish symbol, known to Jews and non-Jews alike. But it’s also an amulet that our ancestors would have worn in childbirth; the Star of David was believed to protect pregnant women against evil spirits who might try to take the baby early. You can buy Star of David-shaped jewelry just about anywhere; I love this ring from Etsy because it is both affordable and easy to wear. 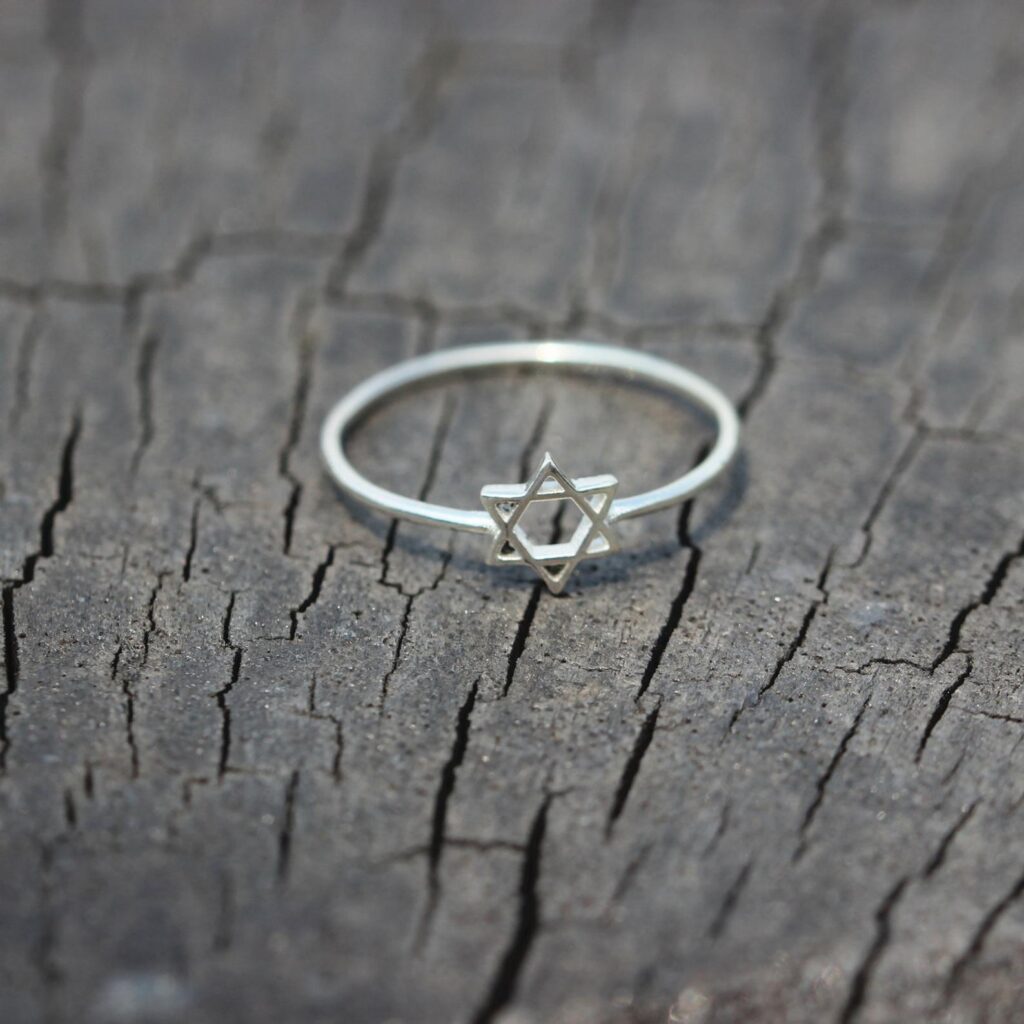 This key-shaped pendant is both aesthetically pleasing and supercharged with magical symbols and words. The following story from the Talmud gives us a clue as to why a key would have been an important symbol for pregnant women. In the Talmud, Taanit 2A:12, there is a story about three keys, or situations, that only God directly oversees: rain, birth, and the resurrection of the dead. Since it is believed that God is personally in charge of birth, it is understandable why a woman in labor would want to wear a key shaped amulet! 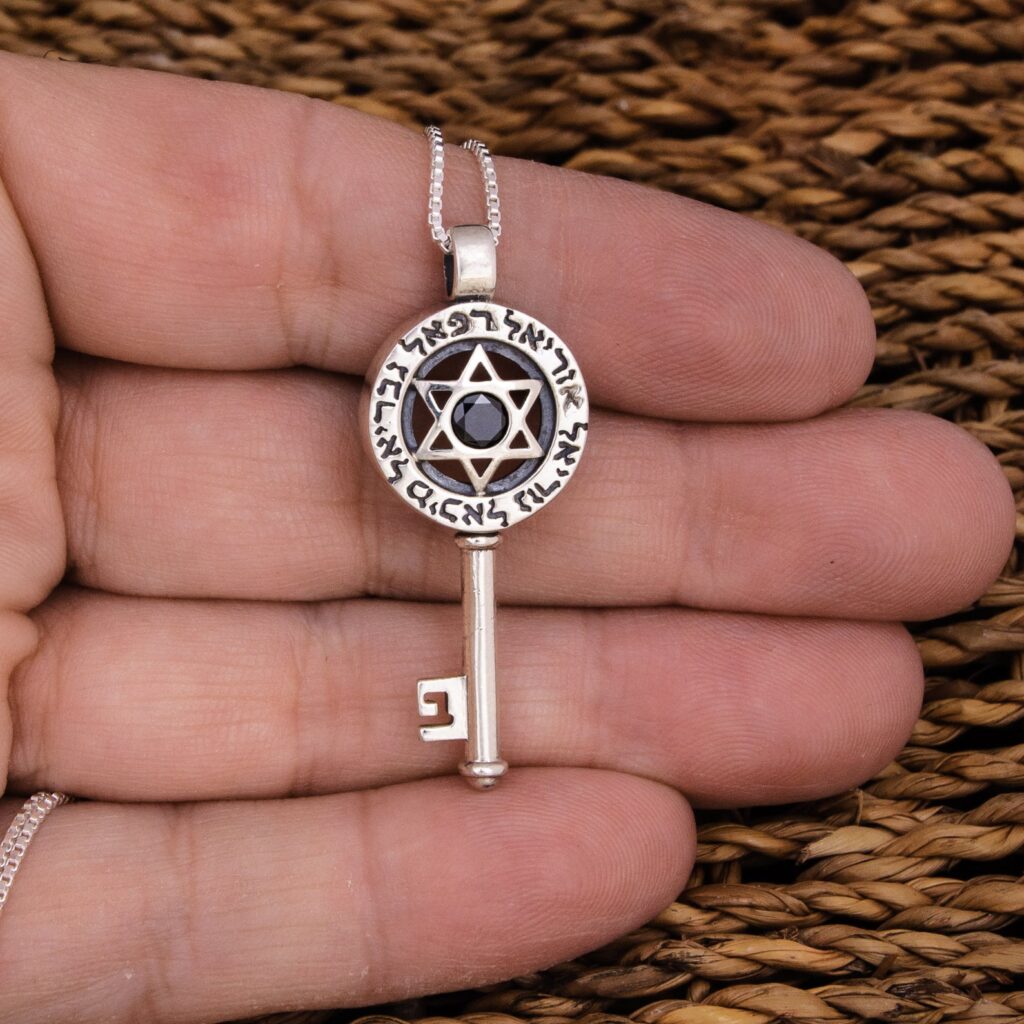 In addition, the Hebrew words around the Star of David — itself a powerful symbol, see above!  are the names of the four archangels: Michael, Uriel, Gavriel, and Raphael. The angelic names gained popularity amongst pregnant amulet wearers in the 18th century, thanks to a highly popular book of the time, Toldot Adam, which says that these archangels watch over pregnant women and children that were still in the womb.