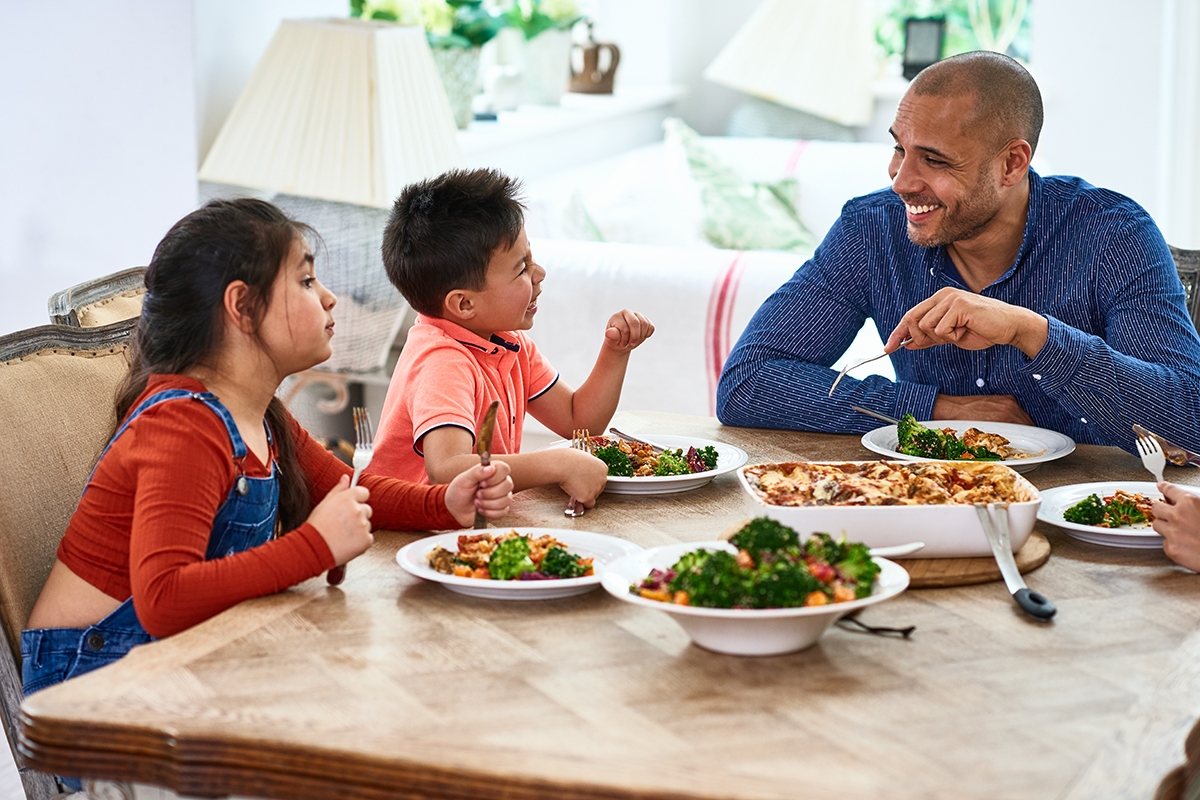 There I was, exhausted and wandering through Trader Joe’s at 8:50 on a Tuesday night, 10 minutes before close. My mission from my partner, Jenny: find new inspiration for our weeknight family dinners. As the clock ticked, this task felt increasingly impossible.

A new flavor of mac and cheese — butternut squash, yum — appealed to me (and I’m sure my three children), but I was confident that wasn’t what Jenny meant. Eventually I found myself lingering in the frozen food aisle — now 8:58, two minutes before closing, the store nearly empty, when, lo and behold, a package of frozen Impossible Burgers caught my eye. For those unfamiliar, Impossible Burgers are among several plant-based brands designed specifically to look and taste like meat. Yes! My taste buds considered this new possibility.

Fast forward a few days later, and there I am cooking up Impossible Burgers on the grill for dinner. “So what do you think?” I asked my kids. “Does it taste like a real burger?” In true elementary school fashion, they really didn’t have much to say about them, but I’m pretty sure they would have preferred the new flavor of mac and cheese.

The truth is, I had mixed feelings about eating a food that’s intentionally trying to look and taste like something entirely different. On one hand, an entirely plant-based burger is drastically better for the environment. The factory-meat industry in our country not only feeds animals chemically-induced hormones to bulk them up as quickly as possible, but the runoff from those facilities is one of the main contributors to climate change and air pollution in the United States.

On the other hand, I thought as I took my last bite of Impossible Beef, there was something fascinating and strange about one food attempting to mimic another. Do we all love the taste of beef so much that we need this imposter burger? Is there some sort of primal human instinct about wanting to indulge meat, even if it’s just a facsimile? Why the need for this product in the first place? Why didn’t I just buy the mac and cheese? I was thus interested to see that the Impossible recently announced a new product, Impossible Pork. At least a few Jewish friends’ ears perked up at the news — the most forbidden of Jewish foods, the highest of treyf, now available entirely in a plant-based form. Except there was one catch: The Orthodox Union, or the OU, a kosher certification agency based in New York City, decided that they would not certify Impossible Pork as kosher, despite the fact that the product is made entirely from plants.

What’s interesting to note is that the OU does certify other “fake” pork products as kosher, most famously those little bacon bits that everyone loves to sprinkle on salads. (Did you know they are actually vegan?) Yet the OU felt they had to draw a line somewhere, and a product with the word “pork” right in the name seemed to cross it. Rabbi Menachem Genack, CEO of the OU’s kosher division, said the decision was made to avoid consumer confusion and provocation.

The announcement of this new product certainly sparked a wide array of reactions within the American Jewish community. As we all know, food is deeply tied to our collective identity, and pork is no exception. As a rabbi, I am frequently reminded by congregants how much they love bacon. But our historic relationship to pork is far less satisfying. “In Europe, Jewish abstention from pork led to many antisemitic incidents and othered Jews from European society for millennia,” Jeff Yoskowitz, founder of The Gefilteria, told Tablet. “From the Spanish Inquisition, where Jews were forced to eat pork-based charcuterie to prove they weren’t Jews (with death as the punishment), to the obscenely antisemitic Judensau art from medieval Germany, to Jews being called pigs at many points throughout history, pork is far more symbolic than other meats.” In other words, pork may be just as connected to our Jewish identities as bagels and kugel — just from the opposite direction.

I noticed myself holding back from getting in the grocery line with Impossible Pork. Certainly, if the product shifts people to a plant-based alternative, we all benefit from the lessened impact on the environment and the immense animal cruelty of factory farming. At the same time, I do want to try it, but I wish they called it something other than pork in order to offer clarity to those who eat it. If I choose this plant-based alternative, how will it impact my children and their still-forming Jewish identities? Isn’t raising kids Jewish impossible enough?

I am reminded of a midrash, a story from our Jewish folk tradition, derived out of the forthcoming weekly Torah portion, Lech Lecha. In the story, the young protagonist Abraham angrily smashes the false idols that adorn his father’s shop — except for the biggest one, in whose hand he places the bat he used to smash all the others. When asked by his dad what happened to all the idols, Abraham points to the bat in the hand of the largest idol. “That idol did it,” he said. “The idol smashed all the other ones!”

In other words, Abraham smashes the falsities — the fake idols, the misbeliefs in his father’s shop — to pursue his path of true identity. And in some way, at least for me, Impossible Pork feels like a call to us to think about what it is we truly want to put in our bodies, and which food we feel most proudly represents our Jewish identity, and which are the false “idols” that need to be left behind.

To me, Impossible Pork feels in some ways equivalent to those blue and white string lights we often see on Hanukkah — taking Christmas, something many Jews have spent years longing for on the sidelines, and rebranding it in an awkward and misshapen “Jewish” kind of way.

Ultimately, we Jews have to decide for ourselves if serving Impossible Pork for family dinner is going to help strengthen or confuse Jewish identities around the table. We’ll each decide if we wish to make that purchase, and how it might or might not fit into our personal identity and our collective Jewish identity, as well. For now, I’m going to hold off on feeding this food to my family — but if anyone reading this tries the Impossible Pork, I’d love to hear about the experience. And if not, there’s always the new flavor of mac and cheese.