My Husband and Kids Keep Kosher But I Don't. Here's How We Make It Work. – Kveller
Skip to Content Skip to Footer

My Husband and Kids Keep Kosher But I Don’t. Here’s How We Make It Work. 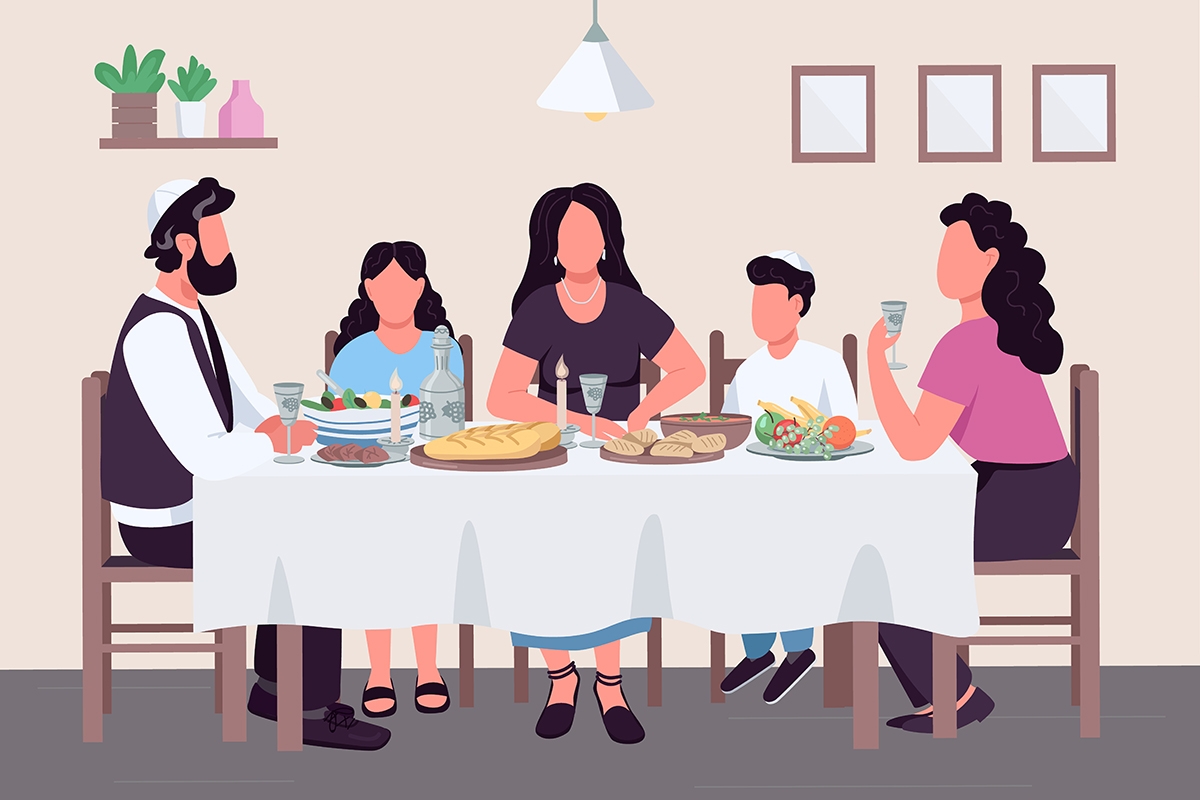 My husband and I are both Jewish — and yet, over the six and a half years we’ve been together, we’ve had several difficult conversations about our vastly different religious practices.

When we met, I was approaching 30 and I had begun to lose all hope of ever finding a nice Jewish guy on the streets (and apps) of New York City. But then, one day, Josh’s picture appeared on a dating site called Coffee Meets Bagel, a dating an app that uses an algorithm to match people who are in the same social network but have not met — kind of the tech equivalent of the local matchmaker in the Old Country.

Josh checked all the boxes: Jewish, Ivy League-educated, and, most important, dare I say, normal. He also had a very kind smile and his profile was embedded with his characteristic humility.

On our second date, Josh took me to an Italian restaurant. I was a little gun-shy from past experiences with men I met on JDate, who didn’t want to date me because I wasn’t religious enough. So, I asked him if he kept kosher.

“Not really,” he responded. “I mean, I don’t knowingly eat treyf.”

I looked down with embarrassment at my bacon-wrapped scallops. “It was the only dish on the menu that appeared to be low-carb,” I said with a sheepish grin.

Fortunately, he didn’t bat an eye. I now know that reaction is emblematic of who he is as a person — he accepts people for who they are. After that date, I called up my best friend and told her he was the one. (She told me I was getting ahead of myself.) Yet, since that day, he has always accepted my neuroses, my quirks, and my constantly falling asleep on the couch with the same open-mindedness with which he approaches our religious differences. As a result, being with him has always felt like going home — not to my actual home, but to an enchanted place I had only dreamt about.

The truth is, Josh and I grew up in very different homes. One of the keystone differences was that his home was kosher and mine was not.

I met Josh’s parents at a kosher restaurant on the Upper East Side. Our religious differences were hard to deny. While they kept speaking about this being a “meat restaurant,” I couldn’t understand what a meat restaurant was, or why the mashed potatoes tasted so different from the kind I was used to (the answer was that they were not made with butter and milk).

When it was just Josh and me, our religious practices were given equal consideration. Josh understood that I felt just as awkward eating at a kosher restaurant as he felt eating at a restaurant that served mostly pork-based tapas. So, we took turns choosing where to dine, and when all else failed, there was always sushi.

But I was outnumbered when I was around Josh’s family. It felt strange to be the only person ordering chicken at a non-kosher restaurant, while everyone was struggling to find something that wasn’t cheese pizza that they could eat. (Like other fairly observant Jews, Josh’s family eats vegetarian food at non-kosher restaurants.) The few times I’ve eaten treyf in front of them, I didn’t enjoy being gawked at as I ate this unfamiliar food or the questions about how it tasted. There was no malice behind it — they were just curious.  Yet, I caught a glimpse of what it would be like to be the proverbial shiksa in a Jewish family, an alien in a strange land of rules of which I was unfamiliar.

I had always been happy with my Jewish identity. I grew up Reform; I had a bat mitzvah and we attended synagogue on High Holidays. I’d always dated Jewish people. I’d had a thing for Adam Sandler since I was about 12 years old and, as a result, seemed to only be attracted to men who at least somewhat resembled him. When I moved to New York in my early 20s, I attended Friday night services at the ultra-trendy Soho Synagogue. Admittedly, I was there more for the Jewish men and free wine than spiritual fulfillment.  I figured anyone willing to get serious with me would share this philosophy.

Josh and I decided to move in together after only about eight months of dating. It was easy for us to agree that our home would be kept some degree of kosher — even though I wasn’t ready to personally commit to keeping kosher  — I wanted my future in-laws to feel comfortable eating there. It was also easy for us to agree that I was free to bring in non-kosher food from the outside, as long as I ate it on disposable dishes. (This is important because I truly, deeply love wonton soup.)

I considered becoming kosher before Josh and I got married. It seemed that it would just make things easier. When that didn’t happen, I thought maybe I’d do it down the road when our future children were old enough to understand. But I just kept putting it off. In the end, I decided that if I became kosher for Josh — and not because I wanted to — I would end up resenting it (or worse, him).

And so, we’ve continued on this path — he keeps kosher and I don’t — even as our family has grown to include two kids, ages 3 and nearly 2. Fortunately, so far, this issue has been far less fraught than I had worried about; at least partial credit for that goes to our warm, inclusive Conservative synagogue in New Jersey. Many families at our shul have one partner who keeps kosher and another who doesn’t, and there are many many interracial, intermarried, and “non-traditionally structured” families as well.

Our kids keep kosher. They have their own separate dishes for milk and meat and they do not eat non-kosher meat. But something that was important to me was that we weren’t sticklers on all the rules at this age, since they are really too young to understand.

I try to steer them away if they ask to sample any treyf that I might be eating. But I do eat treyf in front of them and will answer their questions about what I’m eating without judgment. And if that fails, I can always easily distract them with more kosher squeeze packs.

I haven’t yet told them directly that I do not keep kosher. My hope is that when the time comes, the concepts of choice and individuality will be so ingrained that they won’t think twice about it. Similar to how they know I have a different last name from them and their dad and have never questioned it.

Josh and I are careful not to attach value judgments to particular foods or demand that everyone eat the same thing. We are setting up the parameters for our children to accept religious differences, even within their family, and make their own informed decisions about kashrut. I hope this will lead them to develop a greater appreciation of all differences.

I believe our children are lucky to have two different role models for a positive Jewish identity. Josh and I both enjoy being Jewish; our Judaism is not rooted in shame. We do not want our children to feel like they must hide their practices (or lack thereof) from either of us. Most of all, I believe we are teaching our children how to be accepting of others, while still being true to yourself.