With a 'They Mitzvah,' 'And Just Like That' Brings Us Surprising Jewish Representation – Kveller
Skip to Content Skip to Footer

With a ‘They Mitzvah,’ ‘And Just Like That’ Brings Us Surprising Jewish Representation 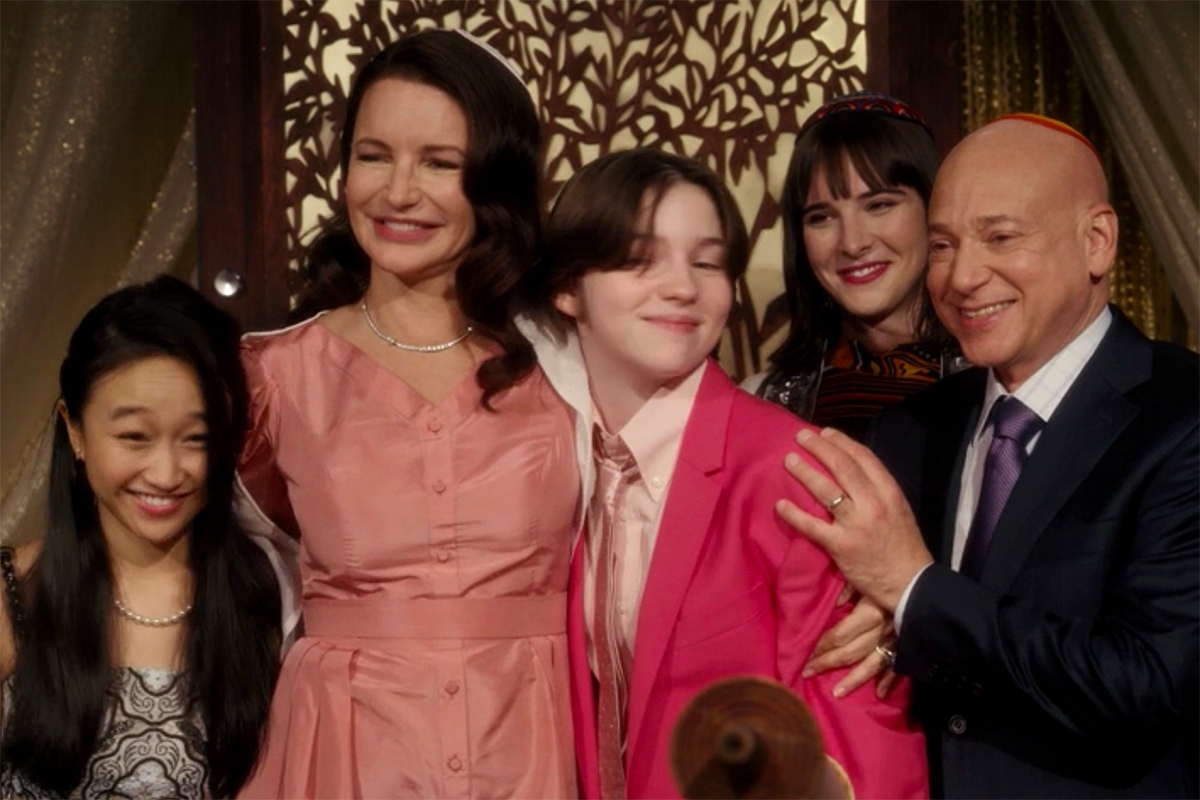 Warning: Spoilers ahead for the season one finale of “And Just Like That…”

As I read this Vulture piece about the winners and losers of “And Just Like That…” season one, I couldn’t help but wonder, as a professional Jew of sorts: Was Judaism a winner?

OK, I know it’s a silly, irrelevant question: Is the new “Sex and the City” reboot good for the Jews?” Like, who cares about that when Miranda’s entire character took such a nosedive and when no one in this show seems to know what a podcast actually is?! But historically, representation of Jewish spaces and religious Jews on SATC has been iffy: stereotypical at best — with cranky, unwelcoming kvetchy rabbis and meddling Jewish mothers — and borderline antisemitic at worse (wish I could wash that affair Charlotte had with a Hasidic Jew in season one from my brain).

For most of the first season of “And Just Like That…” the Jewish moments were about Charlotte’s husband Harry being a cranky middle-aged Jewish dad. Literally. He keeps mentioning it. Verbatim. Our beloved Harry Goldenblatt has become a bit of a kvetcher, and it seems that Steve has overtaken him in the menschiness department (Steve!!!).

Then there was a really bad and very pointless Holocaust “joke” – in case you missed it, Anthony brought a date to Shabbat dinner at the Goldenblatts, and when he realized it was a Jewish dinner, his date had to announce that the Holocaust was a hoax. It was not necessary, and definitely not funny. Though I’m fine with the burnt challah representation that episode offered.

The episode, just like the entire season, offered its disappointments and some pleasant surprises.

Namely, this episode has one of my new favorite onscreen depictions of a rabbi to date: Hari Nef as Rabbi Jen, who perhaps gets called “the trans rabbi” one too many times (but also what was I expecting). Still, she is the queer onscreen rabbi we need. She is funny, warm and oh-so-fashionable. She is chill when she finds out Rock was unprepared for their they mitzvah, and suggests practical solutions. She magically fixes Miranda and Carrie’s friendship in a public restroom while simultaneously bringing us fun physical comedy with an automatic hand towel dispenser (evil things!) that made me giggle with joy.

Basically, I would watch an entire show about Rabbi Jen, and I’m not the only one.

But when it comes to the actual “they mitzvah,” things are a bit more complicated. If I was hoping for an onscreen depiction of a meaningful, alternative Jewish ritual, that is not what the episode offered.

At the opening of the episode, Anthony delivers challah for Rock’s planned party, and we see how hard it is for both Charlotte and Harry to go with the flow of this uncharted ceremony (gender non-conforming b-mitzvahs are totally a thing, and an awesome one at that, but it’s clear that neither Harry nor Charlotte have been to any).

When Anthony tells them the challah is sourdough, Harry balks: “It’s hipster challah, we’re already pushing the envelope with this ‘they mitzvah.’ Can we please give the old Jews something they recognize?”

When Rabbi Jen reveals that Rock has been skipping their Hebrew lessons and is woefully unprepared for their ceremony, she offers an English ceremony, but Charlotte is the one to protest: “I did not convert to Judaism to have my child be they mitzvah-ed in English.”

On the day of the ceremony though, it all falls apart, with Rock, despite the candy bar, fancy challah and Harry’s attempted bribes, refusing to go through with the ceremony.

“I’m not doing it. I don’t believe in it,” Rock tells their parents. “I don’t want to be labeled as anything. Not as a girl. Or a boy. Or Nonbinary. A Jew. A Christian. Muslim. Or even a New Yorker!”

“I’ve failed as a mom and I’ve failed as a Jew,” Charlotte laments to Lisa, who replies in true friend fashion: “Every mom in this room feels like a failure at least once a day.” She encourages Charlotte to find a solution while affirming her as a mom (it’s the good mom friendship representation we were hoping for!).

So Charlotte finds a creative solution — she has her own bat mitzvah instead. And when she’s done loudly and confidently reading from the Torah, Rabbi Jen invites the rest of her family on stage.

“Harry, now that Charlotte has become a bat mitzvah, please come and join us on the bimah, and if anyone else would like to join us for this blessing,” the rabbi beckons (perfectly pronouncing these Hebrew words). Harry and Lily rush to the stage, and Rock, hesitantly, joins them. It’s not the Jewish moment that Charlotte was hoping for, but it is a sweet Jewish moment nonetheless, a moment of a Jewish family standing together in front of the Torah, Charlotte wearing a tallis, Harry wearing a rainbow yarmulke, flanked by a supportive rabbi. They seem happy.

Charlotte, who chose Judaism as an adult, reaffirms her choice as a woman of 55, showing us that Rock could, or could not, still choose to be Jewish — that it’s never too late, and that they’ll always have the most important thing: a loving, supportive family.

If one wanted to, one could argue that it’s the scant actual Jewish practice in the York-Goldenblatt home that led Rock to turn away from Judaism. But that would be silly, because there is nothing that we can do as parents that guarantees our children will embrace Judaism as they grow up, and in that sense, this episode is very much true to life.

When it comes to both Rock’s Judaism and their queer identity, Harry and Charlotte make a lot of mistakes, by pushing, by having preconceived notions about their child, by wanting control where they truly have none. But at the end of the day, as parents, they do the right thing in both regards — accepting their child and giving them space to accept them right back.

Through it all, the show also presents Judaism as a space that is open and accepting of Rock’s journey, of their gender identity, and even, with Rabbi Jen’s flexibility, of their Jewish choices. When you think of it, that’s rather lovely.

For all its flaws, “And Just Like That…” still gave us better Jewish representation than its original. And with this honestly confusing, often cringe-worthy and yet somehow still compelling reboot (thank you, we hated it, and we still want more, is all I can really say) I guess that’s a nice gift.