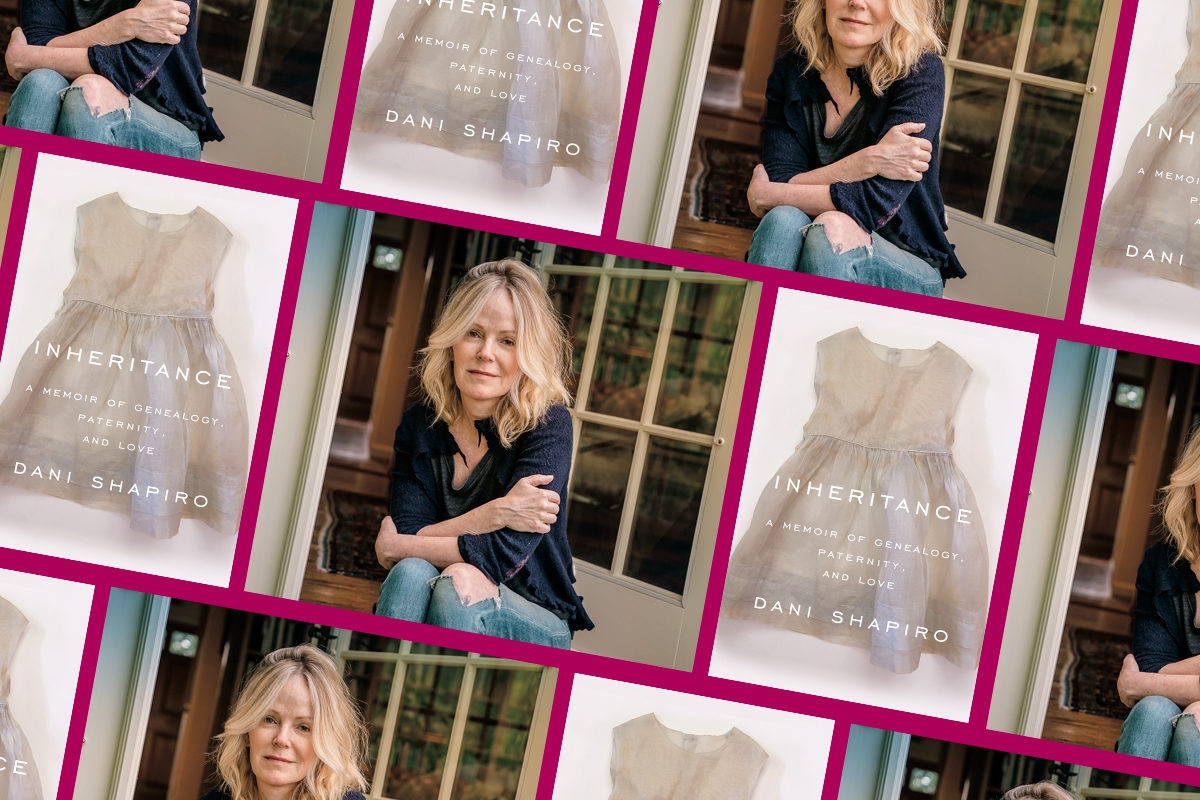 In mid-2016, Dani Shapiro discovered that the man she thought was her father was, in fact, not her father. Up until that point, she believed she descended from her father’s prominent Orthodox family. She grew up in an Orthodox Jewish community, attending yeshiva, speaking Hebrew. Yet, in one DNA test, who she thought she was completely shifted.

Don’t worry — we’re not spoiling anything. While this is the big, inciting moment of Inheritance, Shaprio’s fifth memoir, so much of her incredible story focuses on the aftermath.

Kveller had the chance to chat with Shapiro about the process of writing Inheritance, the concept of “looking Jewish,” and what advice she has for people who are going to submit their DNA for genetic testing.

You write in the acknowledgements, “This is a story that was written as I lived it. Events unfolded in ways that were destabilizing and miraculous in equal measure.” Why did you decide to write this memoir as you were going through it, versus letting time pass?

I always feel with memoir that the story, and the voice, of any given memoir is the relationship between the self telling the story and the story itself. I’ve written a lot of memoirs, and from different vantage points — from a distance, like in my memoir Slow Motion, and then from a kind of immediacy, a journalistic excavation of the present moment, like I did in both Devotion and in Hourglass.

Even though I wrote that in the acknowledgements, I did not actually write it as I was living it. I started that way, and I was writing as I was living it, and I was certainly researching like crazy, but I ended up writing 200 pages and throwing them out and starting over again. In those first 200 pages, I was writing from a place that was really sort of from the center of a traumatic experience, and I don’t think you can do that, and make narrative out of it. And make sense of it. So when I went back into it, ultimately, I was writing from a slight distance.

Throughout Inheritance, you write about how you were always told you didn’t “look Jewish.” What really struck me was that line about a family friend telling you “You could have gotten us bread from the Nazis.” How did these comments on your appearance shape your sense of self growing up?

Yeah, I mean, that’s some of the richest points of discovery for me. I grew up observant. My father was from this Orthodox lineage, and going to shul with my father was some of my happiest memories as a child. It was where he was at his happiest and at his most fulfilled and I was very connected to him. And yet, at the same time, I always felt somehow like I didn’t belong. I felt “other.” I didn’t know why I felt that way; I thought there must be something wrong with me.

People always said, “You don’t look Jewish,” but what they were actually saying wasn’t that I didn’t look Jewish, it was that I did look like I was from another part of the world. I favor my biological father, and he and his ancestors are from Western Europe. That’s where I look like I’m from. When I went to Amsterdam for the first time on vacation, I would walk into shops and markets, and people would just start speaking to me in Dutch. I look like I’m from there, not from Eastern Europe.

But being told all my life that I didn’t look Jewish did have an impact. Even though I railed against it, I fought it, I led with being Jewish wherever I went. Every single time anybody said something like that, I had this inward dialogue which was: Do you really think this is the first time I’ve ever heard that? Is this an original thing that you’re saying? It was a feeling of anger, because what ultimately I was really being told by all the people who said that to me [was]: You don’t look like you’re one of us.

From where I sit now, I feel like that really contributed to my sense of not belonging. Because I was perceived to not belong. And now, ironically, that’s gone. I don’t have to have all these layers of defenses around that feeling, because now I know the truth of it. So, the irony is I actually feel more like I belong now, and more Jewish now, because I finally understand what that piece of the puzzle was.

You know, people say to me, like Rabbi Haskel Lookstein did, very well meaningly, “Judaism comes down through the matrilineal line.” That’s not what it was about for me. I wasn’t bonded to my mother, it didn’t matter, that wasn’t where my Jewishness came from psychologically. It came from my dad and his family.

What has the response to Inheritance been like for you?

Exhilarating. I’ve spent my whole life digging. I’ve written book after book in some way [focused on] family secrets again and again. Going back to my family again and again. I wasn’t done with them. I wasn’t done with that world of us. Probably on some really inaccessible but profound level, I knew there was something I didn’t know. I think so much of my writing life has been a search for it. And then, I spit into a plastic vial and the lights just blinked on, and I saw everything for the first time.

At the same time, I’ve spent my life as a writer trying to create order out of chaos. And then, I was given the most chaotic story ever: Who am I? Where am I from? And what does it mean? And, to have been able to impose the order of literature onto what was a profoundly disordered story, to put it together, and to have the response to it be what it is.

There is now a large community of people submitting their DNA, and discovering family secrets. What advice do you have for people who want to submit their DNA? What would you tell them?

Well I think it’s important for people to know there’s always possibility they’re gonna be shocked by something. It’s not all discovering that you’re a little bit Irish, or that you were Sephardic and you didn’t know that. About two per cent of people do these tests make what’s called a “not-parent-expected” discovery. And given the many millions of people who are doing these tests, that’s a lot of people.

People often ask me if I wish I hadn’t discovered this. Not for a single second. Not even in the most shocked and painful, really grief stricken [moments]. I felt like I lost my father all over again for awhile. I don’t end up feeling that way, but that’s how I felt. Never for a second did I wish that I hadn’t known, because it shed light on so much for me, and it was actually hugely liberating.

How did that come about?

I finished Inheritance, and Sylvia Boorstein, the great Jewish Buddhist teacher, is a close friend of mine and [was] an early reader of my manuscript. She called me after she read it, and we were talking about it, and it prompted her to tell me a family secret of her own. I was on the other end of the phone, and she’s an amazing storyteller, and I was just thinking, God, I wish I was recording this. And, then I got off the phone, and I thought, podcast, huh?

It’s launching on February 14, and we have a 10-episode season. And in each episode, I bring on a guest, and we delve into that particular family secret. It shows me again and again and again that when there have been these huge family secrets, and they’re brought to light, there really ends up being liberation.

This interview has been lightly edited. Header image of Dani Shapiro by Michael Maren.