Writer Sophia Shalmiyev on Being ‘Exiled, Motherless, and Culturally Ambiguous’ 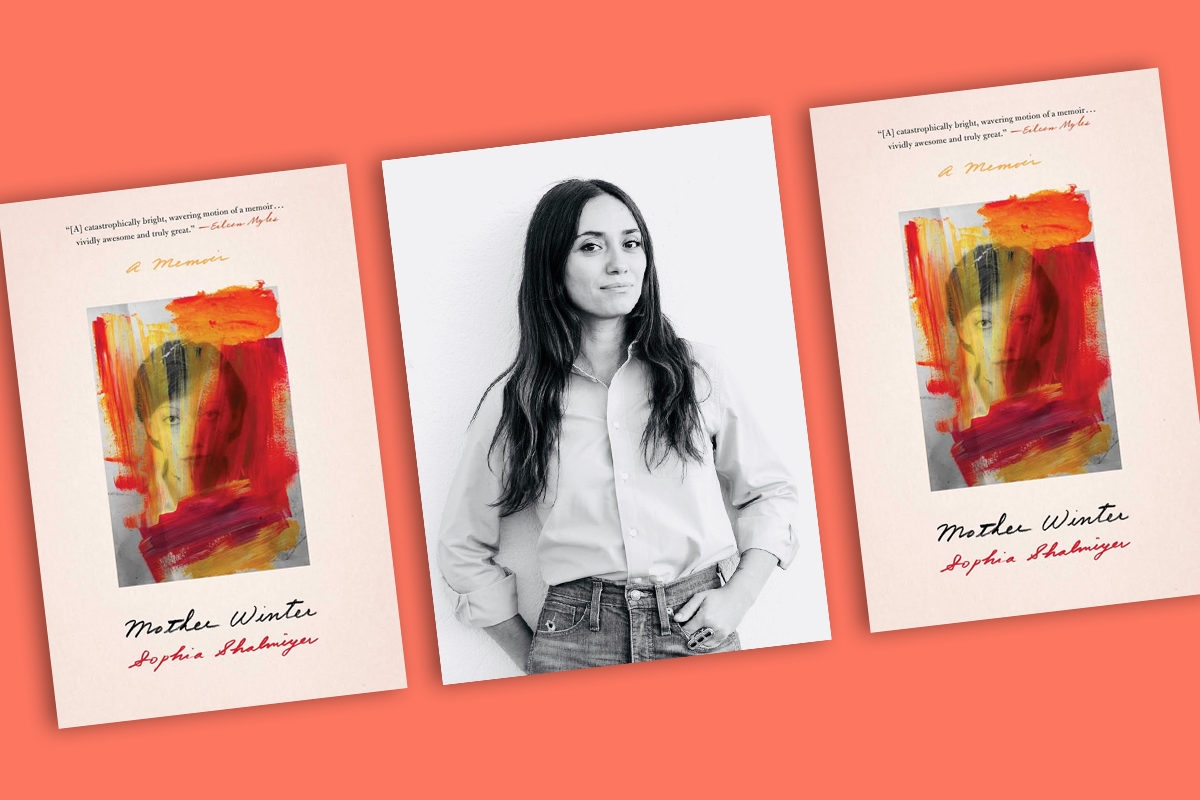 Sophia Shalmiyev left the Soviet Union at age 11 with her father, an Azerbaijani Jew. Her parents had been estranged since her father had a judge deem her alcoholic mother “unfit” to parent. Once they moved to the U.S. in 1990, she never saw her mother again.

Shalmiyev’s recently published book, Mother Winter, chronicles her childhood and her move to America, her subsequent return to Russia to search for her mother, and her own journey into motherhood.

Shalmiyev, 40, began working on Mother Winter about four years ago, just after she gave birth to her second child. The time was well spent: Mother Winter is a moving portrait of motherhood, displacement, and gender. We spoke to Shalmiyev about her memoir, the writing process, anti-Semitism, and her uncle named Chanukah (yes, really).

Why did you decide to turn your story into a memoir?

I originally was not writing it as a memoir. I think it’s a fine thing we have genres and lanes — but I just don’t really see literature that way. I think we also have very strange expectations, and we’re feminizing memoir a lot of times. We expect it to be a medium where women explore their pain and turn themselves inside out. So, I find the word “memoir” problematic to begin with.

From a feminist perspective, I was just kind of writing it as maybe an autoficition novel that was lyrical and explored how untellable stories can be managed. Eventually, my editor [said], “No, there is a reality, there are lanes, there is marketing,” so I re-edited the book multiple times based on that feedback. But what led me to write the book was that I had to explore how to tell an untellable story.

Weaving throughout your story is Sappho, and a multitude of other writers and artists. Who are your main influences?

Grace Paley, really, is my number one. I think she’s so important for your readership — for a liberal, cool, maybe urban mother who comes either from culturally a Jewish background, or is of a Jewish background or Eastern European background. I didn’t realize you could be a Grace Paley, or that there is a Grace Paley to be! Just her sentences, the way she came into her career late in life, and almost kind of accidentally. She wrote without a means to get published. But to me: She’s my hero. She’s the person I finally figured out that I can actually be. There’s a cool activist aspirational Jewish urban mother character, and that was enough for me.

Does Franny look like a Jewish granny? She had me at Shalom! 🤩

What was your Dad and Uncle’s reaction when you told them this story of your family was going to come out?

Mixed reviews, you know? I sent them a PDF version; English is their second language. I was 11 when we left, and my father was 31 or 32, and so it’s very different. They never really moved out of their culture. They still watch the Russian television network, and they only hang out with people from either the Caucuses or from Russia.

My father and I had to go combing through [Mother Winter] as a legal process, as well. I mean, we had our own family stuff to talk about, but we literally had to like be like, piece by piece, what is acceptable? There was some stuff I felt fine to take out to preserve the relationship. And then some stuff was sort of like, that’s the art, and I can’t really do anything about that. In the end? To be determined what everybody’s feelings are. We don’t know.

Do you remember any anti-Semitism in the Soviet Union growing up? Or were you sort of protected from it?

I was not protected from it at all. I noticed my dad’s obstacles more, I think, than a normal kid should. I watched him not get jobs. In Russia, especially a darker-skinned Jew, or anybody from the Caucuses — he was from Azerbaijan — they kind of lump you in with all Jews and Roma. I distinctly remember being on the subway; I remember this man told my dad to give up his seat, and called him, the word in Russian is chernazhopuy, “black ass.”

In my school, my teacher didn’t even want me in the class photo, she wanted me off to the side so she could crop her picture for her own frame [so] that I wasn’t in it, cause I was an undesirable, dark, dirty person, in her mind. [The anti-Semitism] was out-and-out.

When you moved to America, you write about how you started at a yeshiva. What was that like for you?

It just really was shocking. I took it on as my life and my profession. I was getting gold stars and I was writing essays about how beautiful the binding of my prayer book was. I was indoctrinated. I was cutting out the kosher U’s out of every single food in our house and collecting them, because we had a prize for whoever gets the most kosher food into their household. It was so intense, and I was so driven by it, and into it, and through it — that was in seventh grade. I had to learn Hebrew at the same time I was learning English.

Then in eighth grade, I kinda got the hang of things. I was sitting around watching Married With Children, I started listening to punk rock, and [realized], wait a minute, something is a little too insular and off here. And at the same time, all of us girls were put in this situation where we had hyper hormones with no way to talk about. We were supposed to be chaste and proper, but it wasn’t like that at all. And so there was a huge dichotomy there. For me, I really took on learning and loving my new identity as a Jew like it was my job.

In 2004, you returned to Russia to search for your mom. Have you been back since that trip?

I haven’t — and I really, really kind of made a promise to myself [not to go back] because my experience there was so traumatic. The seething and creepy neo-Nazi, neo-fascist vibe that is there was so off-putting and so scary and so desperate. I just said unless I’m going there for work — unless, let’s say, the book gets translated, or I get a fellowship or something — I will not put myself in that kind of position again, where I’m just the “Wandering Jew.”

In the book, when you talk about becoming a mom, you write, “New friends tend to ask why or how I chose to become a mother after I out myself as so elaborately motherless. I had to stop myself from looking for her, I explain.” Can you expand on this?

I wonder what is like for other exiled, or motherless, or culturally ambiguous people. When I went through yeshiva, they kind of realized, [my] mom wasn’t actually Jewish. I had to go through everything to actually become a “real Jew.” I went through all of the stuff to marry myself to a culture and religion and tradition, because I didn’t have anything else. I only had that and my father.

By the time I realized I was deeply in love with someone enough to have a family of my own, the lack and the void and the fear were so great. And I know every woman who either adopts or gives birth or goes through that process feels fear and a lack, but like, wow.

What would it feel like to have a mother in the room with you when you were giving birth? Or, someone to call and ask, what was it like for you when your nipples were cracking? Do you know what I mean? It’s just that over-self reliance, American determinism, that I had to take on for myself completely shattered and ruined me. It messed up my body, my back went out, like every part of me.

I feel like there’s so much that happens for women, that if we are to become mothers, society expects [us to be] so completely competent and so on it. It’s an unimaginable burden. We don’t have a collectivized vision, or a chorus of what it’s like to be a mother. So that’s my whole drive for the book, too. What can I do? I don’t have [a mother], I can’t even imagine what that feels like, so, I’m going to collect wherever, whatever I can, to survive.

You write about how you decided to have both a bris and a baptism for you son. Could you talk about that?

I think that this idea when we came to America that this is an actual melting pot, and we’re all welcome, is now beyond under attack. It’s such a scary prospect to think about, again, we have to pick lanes. For me, spirituality its intertwined with history. I don’t want the history of any of my ancestry to die with me, or with my children, I think the story is important to tell. When I had those rituals, it was literally just to say: this is the story of everybody in my family.

It was important for me to have a bris, because that is the tradition of my ancestry. My father’s family, they’re called Kavkazkii, Mountain Jews, they call themselves mythical mountain Jews, a very small sect. I wanna preserve that through him and tell him those stories, and so that tradition is literally part of his body. And then the baptism, it’s a little theatrical, right? I don’t have a relation to it, but it’s my way of saying [that] I’m not the type of the person who’s going to allow any part of my history to be erased.

Can I just ask about your Uncle’s name being Chanukah?

Oh my god, right?! People think it’s made up, but Chanukah is apparently, I don’t know why, a very common-ish name for Caucus mountain Jews. From that tribe, that’s normal. But yeah, that is his actual factual name.

This interview had been lightly edited. Header Image of Sophia by Thomas Teal.