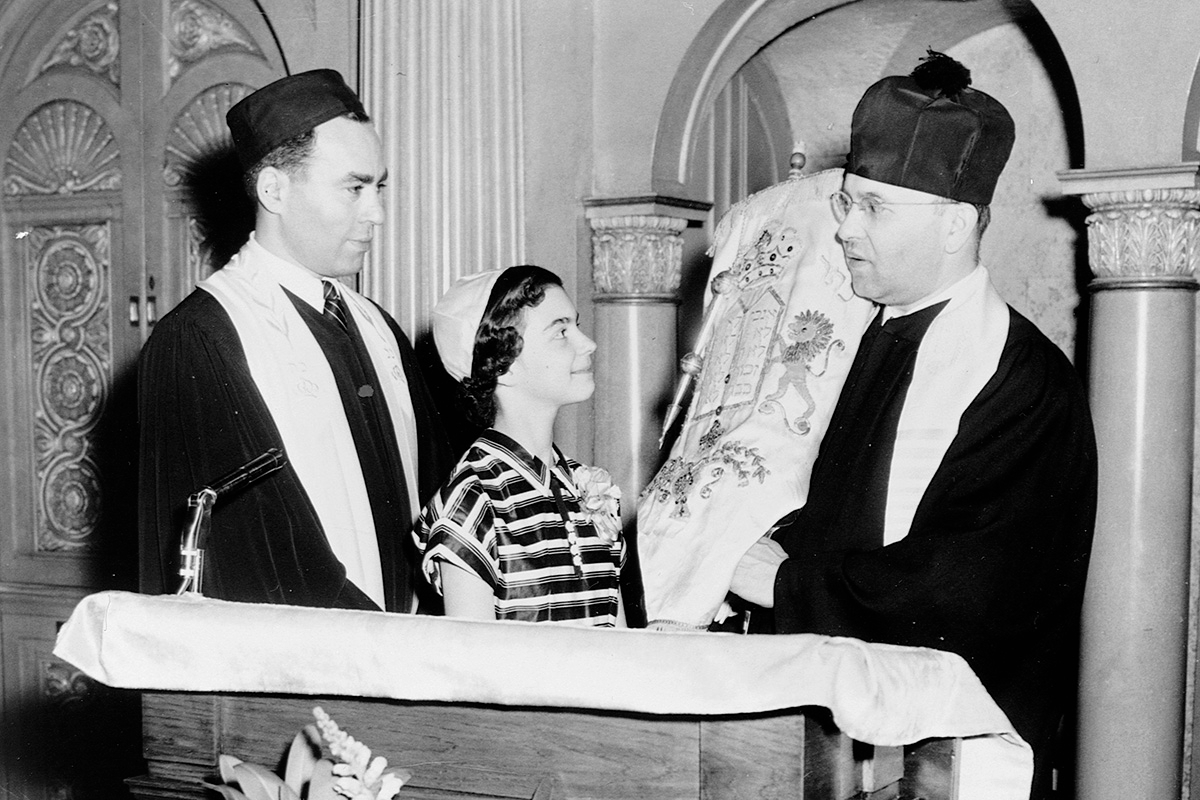 A girl in a bat mitzvah at Adath Jeshuran, attended by Rabbi Morris Garden and Cantor Morris Amsel in 1954. (Photo by © Minnesota Historical Society/CORBIS/Corbis via Getty Images)

That’s what happened to Judith Kaplan. One day, her father, Mordechai Kaplan, one of the founders of Reconstructionist Judaism, told her he wanted her to have a “bas mitzvah” (bas is the Yiddish version of the Hebrew bat) at his newly founded synagogue, the Society for the Advancement of Judaism, or SAJ, in the Upper West Side of Manhattan.

Rabbi Kaplan “always said, there are four reasons why I wanted to have bat mitzvahs and those are my four daughters,” Rabbi Sandy Sasso, who wrote a children’s book about Kaplan’s life called “Judy Led the Way,” recounts.

A few weeks later, on March 19, 1922, Judith stood in front of the congregation, chanting blessings and reading verses from her Chumash, or handheld bible.

As Kaplan herself famously recounted, the moment itself was fairly uneventful: “No thunder sounded. No lightning struck.” Yet, it was one of those moments that changed the very fabric of Judaism.

A century later, Judith’s story is getting retold in an inventive Instagram account celebrating the 100th anniversary. A collaboration between the Jewish Woman’s Archive and SAJ, the content for the Instagram account was created by Mik Moore, who runs a creative agency in New York, in collaboration with the Jewish organization Moving Traditions. Judith is played by actress Dylan Tanzer — one of 400 girls who auditioned to play the Jewish pioneer.

“The idea was that you can use a platform like Instagram to tell the story of a young girl — who might have been using Instagram if it had existed at this historical moment,” Moore, whose family are longtime members of SAJ and whose grandparents were friends of Kaplan’s, told the New York Jewish Week. Moore also consulted a group of 12-year-olds about what would make the account most impactful.

The project was inspired by the Instagram account @eva.stories, which retells the story of a teen going through the Holocaust. But Kaplan’s story, at least to me, feels so much more made for the medium — positive, bright, joyful.

The entire series of videos was filmed over one day at Moore’s grandparents’ apartment in Chelsea — a place that Judith frequented in her lifetime.

In the videos, Dylan speaks emphatically to the camera, her legs rocking a little bit with nerves as she talks with great passion about her love for music (later in life, Kaplan would go on to create incredible Jewish music), her fluency in Hebrew and her devotion to her father. A student at the Golda Och Academy in West Orange, Tanzer even chants the same Jewish prayers Kaplan recited at her bat mitzvah.

In 2022, it sometimes feels like we don’t have much to celebrate. But watching Judith’s story, and reading about her exuberance and passion for Judaism, I can’t help but think how rare it is for us to widely share these stories that celebrate Jewish joy — something that mattered deeply to Kaplan herself.

“This is such a privilege to translate this history into terms that young people can experience and relate to and make that history come alive, especially at such a difficult moment,” Rabbi Lauren Hermann, the spiritual leader of SAJ, tells Kveller. She calls the anniversary “a beautiful moment of ‘kol Israel'” — something that can be celebrated across all spectrums of Judaism, where bat mitzvahs are now celebrated in some form or another, from secular circles to Orthodoxy.

What’s so wonderful about this account is also how it ties in Kaplan’s story with current events of her times that feel relevant now — stories about immigration, the fight for women’s rights and anti-racism, featuring posters from the NAACP and the American Birth Control League.

“A lot of the things that were in the air at that time were not so different,” Judith Rosenbaum, the CEO of the Jewish Women’s Archive, tells Kveller. “People were thinking about voting rights. They had recently been out of the pandemic.”

Rabbi Carole Balin, who is writing a book about the history of bat mitzvahs, also reminds us that Judith’s bat mitzvah “took place two years after women got the vote in this country. It did not happen in a vacuum.”

Rosenbaum stresses that many of the young people she works with are surprised to find out that the bat mitzvah is so young. And it’s true, the bat mitzvah is such a ubiquitous part of American Judaism, featured in TV shows and movie episodes, and celebrated with lavish parties, that even if you are not Jewish or grew up with few Jews, you still probably know about it.

Yet even Kaplan’s history-making bat mitzvah doesn’t look much like the celebrations of our day. It took many years until women were allowed to read from the actual Torah scroll and for a bat mitzvah to carry the same significance of a bar mitzvah — the initiation into Jewish communal life.

“For girls, it was a dead-end — one and done after the bat mitzvah,” Balin says of those early ceremonies. “And so everything would snap back to the way it was.”

Balin recounted the story of Judith Paul Aronson, who had her bat mitzvah in the ’40s, but was so frustrated that she couldn’t touch the Torah that she snuck into her synagogue two years later to do so. There’s also the story of Kinereth Dushkin Gensler, who was devastated after she wasn’t allowed to touch the Torah at her bat mitzvah — what was meant to be the first bat mitzvah at her parents’ Jewish summer camp, Camp Modin — because she got her period that week.

Delving into Kaplan’s story reminds me of how uniquely American the bat mitzvah still is. As a secular girl growing up in Israel, I recall how jealous I was back in the early 2000s while going to my brothers’ bar mitzvahs and seeing them recite from the Torah while I couldn’t. The bat mitzvah for Israeli girls still mostly means an over-the-top party without the actual religious proponents.

“People often think of Judaism as something that’s handed down from the older generation to the younger generation,” Rosenbaum says, but through Judith’s story, “we see the ways that young people also hand things up.”

“These girls of 12, or 13, this terribly cringy age, in the beginning, middle or end of puberty, come into the spotlight. They literally ascend the stage of Jewish life, the bimah in synagogues, and they spark a gender revolution in Jewish communal life,” Balin says. “It starts to incentivize and spur women double, triple their age to demand access to roles in ritual life, and they succeed.”

“By the time Rabbi Sally Priesand becomes the first female rabbi [in 1972], she has these girls half her age to thank,” Balin adds.

The first bat mitzvah was also a watershed moment because it was the first time people who were not cis-gendered men were let on the bimah. It’s Kaplan’s ceremony that helped lead us to b-mitzvahs and gender neutral b’nei mitzvahs (and yes, what “And Just Like That…” called a they mitzvah), ceremonies that celebrate nonbinary Jews.

One of Balin’s favorite stories from her book is that of Soren Claire Barnett, who was called to the Torah twice: once in 2011 as a bat mitzvah, and at age 16 when they had a bar mitzvah on a Birthright trip in Israel. Soren told Balin that “they felt like they were the Jewish gender-neutral dream.”

“I often talk about feminism as being the major kind of transformation of American Judaism in the last 100 years and it’s not just in terms of women’s access and involvement, but also just in terms of all the other questions that came up from raising the question of women,” Rosenbaum says. “As women come in, they also ask different questions about who’s not at the table.”

Today, the bat mitzvah is 100 years young. But the coming-of-age ritual still has so many places left to grow — and so much new Jewish joy to be found. Let’s see where it gets to at 120.