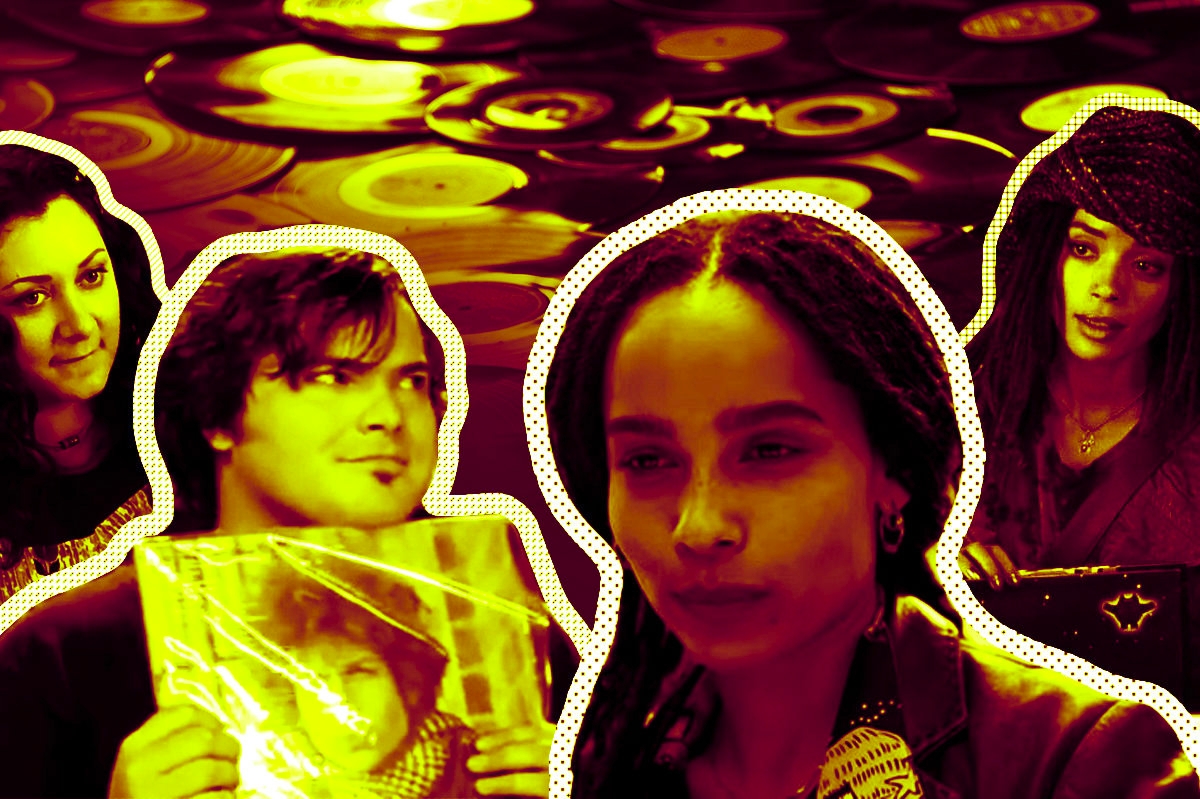 High Fidelity means so much to me. Based on a 1995 novel by British author Nick Hornby, the 2000 movie stars John Cusack as Rob, a record store owner in Chicago who has some serious relationship problems and an obsession with Top 5 lists. I watched it over and over in the years after it came out.

The passion for music imbued in the film resonated with me — I was a teen whose favorite place was Israeli record stores (may all their memories be for a blessing). I loved nothing more than sampling new music in their dark corners and getting the occasional intoxicating compliments from its music nerd employees (seriously, it was better than getting a perfect score on any exam).

So I was thrilled to find out when I heard Hulu was about to release a 10-episode adaptation of the book and film, starring none other than Zoë Kravitz, who I’ve loved in everything I’ve seen her in, including Big Little Lies, and who is a member of the tribe.

While reacquainting myself with the movie, and absorbing myself in this delightful new series, I discovered a lot of fun Jewish tidbits that I felt compelled to share with you! So here are 18 (get it? Chai Fidelity?!) Jewish facts about all the many versions of High Fidelity:

1. Jewish dad Jack Black was in the High Fidelity movie, and his performance was truly one of the highlights of that film. Black plays store clerk Barry Judd, a snarky and judgmental guy. This role is truly when I realized that Black was an incredible talent. Not only was he great as the condescending but lovable music lover, he also gave an amazing performance of Marvin Gaye’s “Let’s Get It On” which truly blew me away. If you loved it too, I recommend Black’s amazing rendition of the Hanukkah blessing or his great performance of “Chad Gadya.”

3. Lisa Bonet (that’s right, Zoë Kravitz’s mother!) plays musician Marie De Salle, one of Rob’s love interests in the movie. She sings a truly entrancing version of Peter Frampton’s “Baby, I Love Your Ways.” Bonet’s mother, Arlene, was Jewish and a music teacher, which may have helped Bonet ace this gorgeous musical number.

4. Black’s character, Barry, is a big fan of Bob Dylan, who is also prominently featured in the film’s very comprehensive soundtrack. Barry basically cuddles up with a copy of Dylan’s record “Blonde On Blonde,” telling a customer that not owning the album is nothing short of “perverse.”

5. In the movie, Sarah Gilbert plays Anna Winkle, the love interest of store clerk Dick. The Jewish mom of three (she has two children with her former partner Ali and one with Lynda Perry) and former Roseanne star is adorable in this small part:

6. Hornby, who wrote the High Fidelity novel (and many other books which have become cult classics and smash hits like About a Boy and Fever Pitch) doesn’t often write Jewish characters. But when he was a kid, his grandmother used to call him a “wandering Jew” whenever he had too much shpilkes. The first Jewish character he wrote was actually in a script adaptation of a novel.

Hornby adapted the script for Lynn Barber’s novel An Education which stars Peter Sarsgaard (yes, who is married to Jewish mom Maggie Gyllenhaal) as David, a charming Jewish conman.

“I developed the script, originally, with a Jewish director. We talked about whether or not to keep him Jewish,” Hornby told the Forward. “And we decided that it would probably be more offensive to excise his Judaism from the piece.”

7. Rob — who becomes Robyn — in the new High Fidelity remake is played by Zoë Kravitz, who, as we have established, is Jewish. Kravitz is a big fan of the movie and the book, though she didn’t watch it when it came out in 2000 because “my mom [who starred in the original movie] wouldn’t let me see it — I was a little bit young” (she was 11).

Kravitz’s parents, musician Lenny Kravitz and actress Lisa Bonet, are both half African American and half Ashkenazi Jewish.

Kravitz has said she finds inspiration and strength in her heritage: “Jews and African Americans have had so much pain, carried so much on their shoulders, and come so far,” she told Elle.

Kravitz truly gives a whirlwind performance, carrying us through emotional highs and lows. The bagel-loving actress is by far the best part of this show.

8. Jewish musician Jack Antonoff (AKA Lena Dunham’s Jewish ex-boyfriend) has a cameo in the new High Fidelity. He plays himself, a music producer, and even waxes poetic about falafel.

9. Zoë Kravitz’s character cheers with a “l’chaim” in one scene of the show. Yeah, that’s basically the Jew-ish extent of it.

10. Nadine Malouf, who portrays Rob’s sister-in-law in the TV show, played Tzeitel in a production of “Fiddler on the Roof.”

High Fidelity is out now on #hulu @highfidelityonhulu !! Dream to work with total badass genius @zoeisabellakravitz and be directed by one of best in the biz @andrew__deyoung !! Stream it now baby!

11. Jewish comedian and SNL cast-member Chloe Fineman plays an Instagram influencer in what is basically one of the funniest scenes in the show.

12. Dana Drori plays Lily, Rob’s rival for her iconic ex Cam’s love and his current fiancé. Drori is a Canadian Jew, and on her Rosh Hashanah-adjacent wedding, she decorated the tables with pomegranates.

13. Tough Trade, the record store that in the TV show is supposed to rival with Rob’s store — is actually based on the real-life record label and chain of record stores, Rough Trade. Their biggest location is in Williamsburg, Brooklyln, and it’s actually where some of the scenes from the show were shot. Rough Trade was founded in 1976 by Geoff Travis, a British Jew.

As a distributor, Travis’ Rough Trade helped popularize iconic bands like Joy Division, Depeche Mode, and UB40. And as a label, Rough Trade signed some truly amazing bands, including The Smiths and The Strokes. He truly made music history.

Travis’ grandparent came to Britain to escape pogroms in Eastern Europe, and his family was quite observant (his mother keeps kosher) though liberal. Travis says he learned a lot of what he knows about running a record label from volunteering in a kibbutz. Pretty cool, right?!

14. Natasha Lyonne directed episode 8 of the show: “Ballad of a Lonesome Loser.” The beloved Jewish actor and Russian Doll creator has been directing shows all around New York: “I was directing High Fidelity mostly in Brooklyn, and now I’m directing Awkwafina mostly in Queens, so I’m really making my way through the boroughs,” Lyonne joked to Deadline.

16. Justin Silver, who plays Justin Witt, Rob’s stand-up comedian ex in the show, is himself a stand-up comic and is also a member of the tribe.

At a show, Silver once joked, “I’m Jewish, we don’t go to jail,” and was heckled with a shout of “Bernie Madoff!” Silver asked the member of the audience to name another Jew. On his podcast, Neurotica, he also admitted to being a bit of a self-hating Jew.

17. Did you know that High Fidelity was a musical?! That’s right, the movie made it to Broadway, with song lyrics written by Jewish songwriter Amanda Green (she’s the daughter of Jewish actress Phyllis Newman and Jewish lyricist Adolph Green). Each song was inspired by a different musical act, including the Beastie Boys, Billy Joel, and of course, Boy Dylan.

18. Turns out, one of my favorite all-time songs was inspired by High Fidelity. Jewish songstress Regina Spektor‘s hit song “Fidelity,” was written after she saw the 2000 cult classic. “I never loved nobody fully/Always one foot on the ground” Spektor sings, alluding to Rob realizing (SPOILER!) that he always had one foot out the door in his relationships.