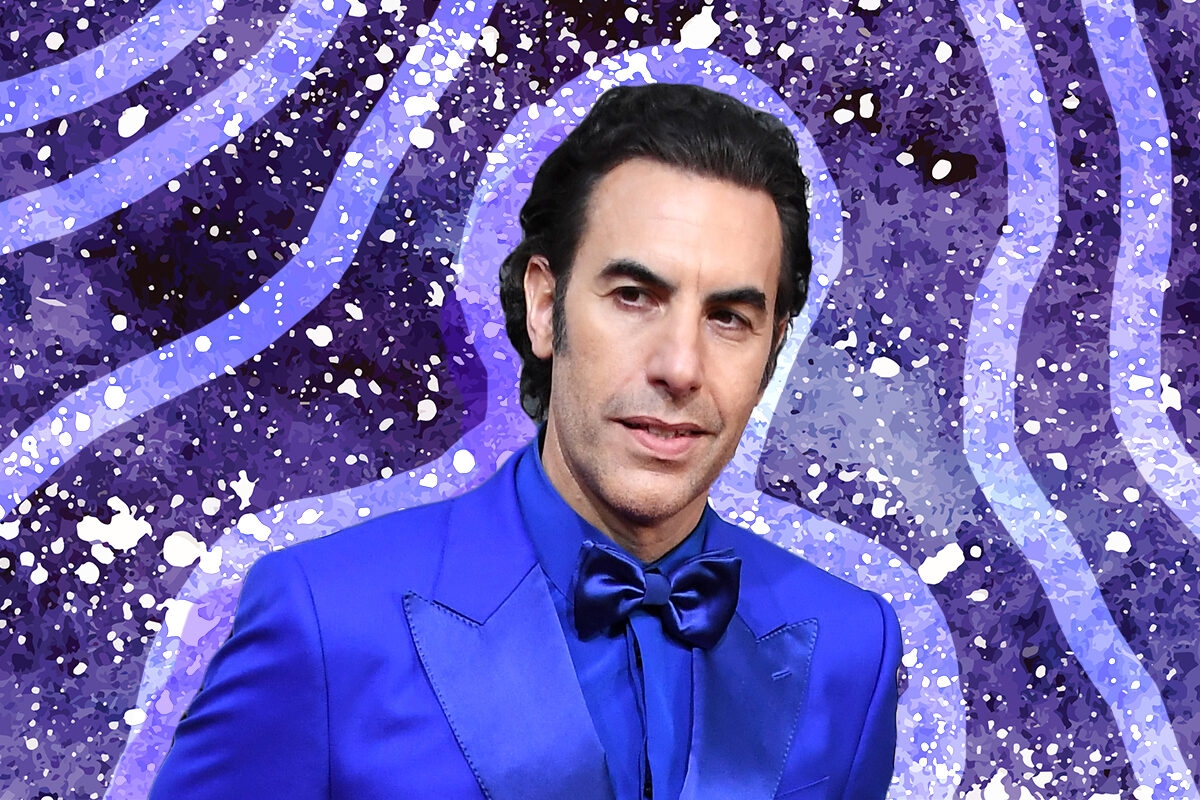 Sacha Baron Cohen is a Jewish dad, a mensch, an actor, an activist, and… Borat.

As anyone who’s been following his career knows, Baron Cohen’s evolution as an actor and an activist has been a wild ride. I first came to know Baron Cohen when most of Europe did: When he played the yellow tracksuit-wearing Ali G in the 2000 British satire Da Ali G Show.

At the time, I couldn’t stand his crude humor and his completely not-PC nature. My feelings started to reluctantly change in 2006, however, with the release of Borat, in which Baron Cohen plays a ridiculous journalist from Kazakhstan who goes on a tour through the U.S. Baron Cohen recently called him “the first fake news journalist.” I couldn’t help but laugh at the over-the-top movie.

And now? I’m a total admirer of the actor — and I know I’m not the only one. After taking on some serious roles and becoming an outspoken activist, fighting social media’s spread of misinformation — and drawing upon his Jewish roots through all of it — it’s hard not to think, Wow, Sacha Baron Cohen is a total mensch.

Here are 18 Jewish facts about Sacha Baron Cohen that are integral to his life and career. Wawaweewa.

1. He was born in 1971 to Jewish parents. His mother, Daniella Naomi, a fitness instructor and photographer, was born in Israel to a German Jewish mother, Liesel Weiser, a ballet dancer turned fitness instructor who escaped Nazi Germany before the Holocaust. Here is a video of Liesel teaching a workout routine and talking about her life:

His father, Gerald, who died in 2016, was a business owner. He grew up in Wales and was part of a fairly long lineage of British Jews who escaped the pogroms in Europe in the 1880s.

Baron Cohen also has two older brothers, Amnon and Erran, a musician who composed the music for Borat, as well as this awesome cover of “Dreidel, Dreidel.”

2. He grew up in London and went to Haberdashers’ Aske’s Boys’ School, where he met frequent collaborator Dan Mazer. When he was 12, he got into breakdancing, and his mother would drive him and his friends to Covent Garden to break some moves: “Essentially we were middle-class Jewish boys who were adopting this culture, which we thought was very cool. That was sort of the origins of Ali G.”

His break dancing group also performed at his own bar mitzvah, as well as others — which some might say was Baron Cohen’s first taste of being in the spotlight.

3. One of his first comedy bits was about a Hasidic Jew. For family Shabbats, Baron Cohen and his brother Erran sometimes developed musical skits. One, Erran told Moment Magazine in 2010, was “about a Hasidic guy wearing all these clothes making him schvitz [sweat]. Eventually, he takes off his hat and coat, ends up in a swimming costume, and converts to Christianity.”

Sacha and Erran performed it at comedy clubs in London and filmed it for the BBC, but, “they banned it, saying we insulted three religions in three minutes.”

4. He volunteered in kibbutz Rosh HaNikra as part of a Habonim Dror gap year. Baron Cohen has definitely shown that he is passionate and connected to Israeli history:

"Morality is the wisest policy". Shimon Peres was one of the world's great optimists. A man who fought for peace and very nearly achieved it. #peres

5. He played Tevye in Fiddler on the Roof when he attended Cambridge. It’s a rite of passage for every Jewish actor!

6. Speaking of Cambridge, Baron Cohen wrote his thesis about Jewish involvement in the civil rights movement. He traveled to the U.S. and used the ADL’s archive for this purpose.

8. While Baron Cohen has been criticized by Jewish organizations for his portrayals of Ali G and Borat, he says that his intention is always to show how easily people espouse hateful views, including antisemitism.

“Borat essentially works as a tool,” Baron Cohen told Rolling Stone in 2006. “By himself being anti-Semitic, he lets people lower their guard and expose their own prejudice, whether it’s anti-Semitism or an acceptance of anti-Semitism. ‘Throw the Jew Down the Well’ [a song performed at a country & western bar during Da Ali G Show] was a very controversial sketch, and some members of the Jewish community thought that it was actually going to encourage anti-Semitism. But to me, it revealed something about that bar in Tucson. And the question is: Did it reveal that they were anti-Semitic? Perhaps. But maybe it just revealed that they were indifferent to anti-Semitism.

“I remember, when I was in university I studied history, and there was this one major historian of the Third Reich, Ian Kershaw,” he continued. “And his quote was, ‘The path to Auschwitz was paved with indifference.’ I know it’s not very funny being a comedian talking about the Holocaust, but I think it’s an interesting idea that not everyone in Germany had to be a raving anti-Semite. They just had to be apathetic.”

9. However, Baron Cohen has been hesistant to play Jewish characters in the past.

“I used to be reluctant to play anyone Jewish because I didn’t want to be typecast as the Jewish actor,” he told the New York Times. “There are other Jews in Hollywood besides me. But somehow, people thought of me as ‘a Jewish actor’ even after I played Borat, the most outwardly anti-Semitic character probably since Leni Riefenstahl directed movies.”

“I saw Eli Cohen, as he was written in the show, as an extreme version of myself,” Baron Cohen told the New York Times. “The stakes were higher for him, because the price of failure is imprisonment and execution.”

11. His latest Jewish role is Abbie Hoffman in Aaron Sorkin’s The Trial of the Chicago 7. Hoffman was an anti-war activist and a provocateur, whose sense of humor makes him a perfect character for Baron Cohen.

12. Baron Cohen is incredibly secretive about his private life. He met his wife, Isla Fisher, in 2002 at a party. They got married in 2010, at a very private ceremony in Paris —  only six people were in attendance.

Fisher converted to Judaism prior to the wedding. “I would do anything — move into any religion — to be united in marriage with him. We have a future together, and religion comes second,” she told The Evening Standard before they married.

13. Fisher — who is a wonderful comedian and actress in her own right, as well as a best-selling children’s book author — does truly seem to love being Jewish. “I love the focus on family, food, and laughter,” she told C Magazine in 2013. “You know, I didn’t get to go to university because I’ve been acting since I was a kid. So, for me, studying theology was also fascinating. I love Judaism.”

Shana Tova. Happy New year. Wishing you all a happy and sweet new year. Peace, joy and happiness to everybody.#happyjewyear

This is my latka frying outfit 🧡

14. Fisher and Baron Cohen have three kids: two daughters, Olive and Elula, and a son, Montgomery. They are truly super private when it comes to their children, though it’s clear that Judaism is part of their lives.

15. While Judaism is super important to Baron Cohen, he doesn’t consider himself religious, per se. “I wouldn’t say I am a religious Jew,” he told NPR. “I am proud of my Jewish identity and there are certain things I do and the customs I keep.” Baron Cohen and his family try to keep kosher, observe the Shabbat when they can, go to synagogue on certain occasions, and of course, celebrate the Jewish holidays.

16. Baron Cohen used to also be private about his activism, but in 2019, he made an impactful speech at the ADL’s Never Is Now Summit on Anti-Semitism and Hate, where he talked about the dangers of Facebook and social media, calling it “the greatest propaganda machine in history.”

17. Baron Cohen also used a moment on stage at the Golden Globes in 2019 to both call out Mark Zuckerberg and celebrate fellow Jewish dad and comedian Taika Waititi.

“The hero of this next movie is a naive misguided child who spreads Nazi propaganda and only has imaginary friends, his name is Mark Zuckerberg,” he joked to the crowd about Waititi’s Jojo Rabbit, before introducing the “brilliant and groundbreaking” director’s film:

I’ve tried to post this video 5 times, but to no avail. Any idea who owns Instagram? If it fails again, I may have to use WhatsApp. #goldenglobes

18. Baron Cohen reportedly dedicates the new Borat film — out next week! — to a Holocaust survivor, Judith Dim Evans, who appears in the movie but died after it was filmed.  OK, so said Holocaust survivor’s estate is suing, claiming that “Evans participated not knowing she was in a satire, one the suit claims was done to ‘mock the Holocaust and Jewish culture.'”

But Baron Cohen and the movie’s crew think the estate will change their mind once they watch the film, according to Deadline. The publication claims that Baron Cohen did something unprecedented in this film: “he had someone tell Evans and the friend who shares the scene with her that Baron Cohen himself is Jewish and playing an ignorant character as a means of Holocaust education, by featuring a Holocaust survivor who ends up challenging the anti-Semite by charmingly telling her own story.”

16 Spooky Jew-y Movies That Are Perfect for Halloween