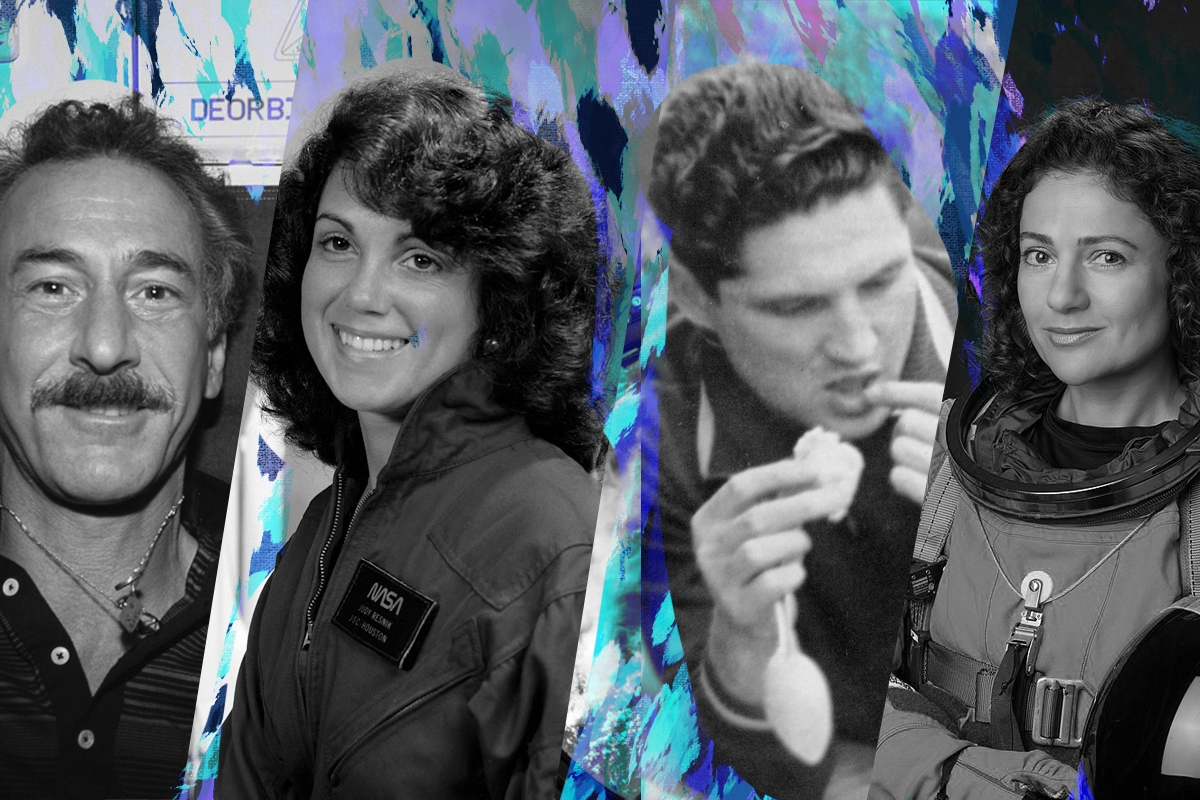 Jews! In! Space! It’s not just the concept of a memorable Mel Brooks sketch, or a conspiracy theory propagated by Marjorie Taylor Greene — it’s a reality.

Jews have been boldly going into space for over half a century — and this week, Jewish actor William Shatner, AKA Captain Kirk from “Star Trek,” joined their ranks. Shatner participated in a successful launch of Jeff Bezos’ Blue Origin capsule. Calling his 11-minute journey into space, “the most profound experience I can imagine,” Shatner, 90, made history as the oldest person to make it to space. Mazels!

Through the years, including Shatner’s journey, 18 Jews — chai! — have been to space, hailing from four different countries (Russia, the U.S., Israel, and Canada). Tragically, two Jewish astronauts who made it to space did not survive their final missions. Next year, at least two Jews are slated to join the ranks of space Jews, via commercial SpaceX missions: Israeli pilot Eytan Stibbe is slated to fly to space on January, 2022, and director Doug Liman will be traveling to the final frontier in the fall of 2022 where he will be shooting a “top-secret feature” with Tom Cruise(!).

As we celebrate yet another Jew in space, let’s revisit some of the other Jews who made it to the final frontier:

Cosmonaut Boris Volynov was the OG Jew in space, aboard the Soyuz 5 way back in 1969. The son of a decorated Jewish doctor and a non-Jewish father, Volynov, who was born in Siberia, was an accomplished pilot and engineer and part of the original group of Russian cosmonauts.

Fascinatingly, Volynov almost didn’t go make it to space: he was supposed to command a previous flight, but his crew was removed from the mission for mysterious — possibly antisemitic — reasons. Regarding his second chance, with the Soyuz 5, as Soviet Air Force General Nikolai Kamanin, wrote in his diary: “In the very last days, letters came from the Central Committee with an appeal: ‘Do not send Jews into space!’ With great difficulty, we managed to protect the good guy from these malicious and stupid attacks.”

The Soyuz 5 did take off, with Volynov in command, in January 1969. Along with the Soyuz 4, it made history as the first docking of two crewed spacecraft, and the first transfer of crew from one space vehicle to another. But Volynov almost didn’t survive the mission when the spacecraft malfunctioned upon re-entry.

Volynov made it to space once again on the Soyuz 21 in 1976. Now 86, he is the only surviving member of the original group of cosmonauts.

The incredible Judith Resnik was the first Jewish American person, and the second American woman, to make it to space. Resnik’s first space mission took place in 1984, onboard the Space Shuttle Discovery. She was tragically killed at age 36 during her second mission, aboard the Space Shuttle Challenger in 1986, when the spacecraft combusted 72 seconds after takeoff — an event that marked the nation.

A remarkable scientist and engineer, Resnik was the daughter of Jewish immigrants and grew up in an observant home. A memorial service for her took place in Temple Israel in her hometown of Akron, Ohio, and drew some 1,000 people, including the first female astronaut, Sally Ride.

One year after Resnik became the first Jewish American to make it to space, Jeffrey A. Hoffman joined the ranks. While he was technically the first American Jewish astronaut to be recruited to NASA, back in 1979, his first space mission took place on the Space Shuttle Discovery in 1985. During that mission, Hoffman made history as the first American astronaut to make a contingency spacewalk, when he tried to repair a satellite.

Hoffman, an astrophysicist, has been on a total of five space missions — logging in 1,211 hours and 21.5 million miles in space. (And you thought carpooling was bad!) In 1993, while on a mission on the Space Shuttle Endeavour, Hoffman celebrated Hanukkah with fellow Jewish astronaut Scott J. Horowitz. They brought a dreidel, and a tiny menorah into space for that purpose, though the menorah was never lit.

Hoffman also brought with him a mezuzah, a tallit from his son’s bar mitzvah and a miniature Torah scroll. And it wasn’t just for show: Hoffman was the first person to read from the Torah in space. While he didn’t have a minyan, his rabbi helped him prepare a special service to lead in the space shuttle.

Happy Hanukkah! In December 1993, astronaut Jeffrey Hoffman celebrated Hanukkah on board Space Shuttle Endeavour with a dreidel and a small traveling Menorah he brought with him on STS-61. pic.twitter.com/iRZY8ifxCg

Ellen Shulman Baker was the second Jewish American woman to go to space. (She is also the daughter of Claire Shulman, a nurse who made history as the first woman to be elected as Queens Borough President!) A physician, Baker became a NASA medical officer in 1981 and was selected to be an astronaut in 1984. She participated in three space flights and logged over 686 hours in space.

In her first mission, in 1989, Baker’s team deployed the Galileo probe to study the planet Jupiter. Her last mission, in 1995, was on board the Space Shuttle Atlantis, which became the first American space shuttle to dock at Mir, the Russian space station.

David Wolf, a medical doctor and electrical engineer from Indianapolis, was selected by NASA as an astronaut candidate in 1990. Wolf participated in four space flights, including a 128-day mission to Space Station Mir, for which he trained in Russia.

As Wolf said in one interview, “We Jewish astronauts do consider ourselves as representing the Jewish community. We take it seriously. I carried a mezuzah and it’s on my door now. I also carried a yad, a Torah pointer, and gave it to my synagogue in Indianapolis. I had a small menorah up there.”

Wolf also had a longstanding debate with Hoffman (no. 3, above) about who had the longest dreidel spin in space: “I have the world-record dreidel spin,” he has said. “I know mine went for like an hour and a half until it got sucked into an air intake.”

Mark Polansky grew up in Paterson, New Jersey, the son of a Jewish father and a Hawaiian mother of Korean descent. Polansky, who was nicknamed “Roman” by his crewmates, joined NASA in 1992 as an aerospace engineer and research pilot, and was recruited to be an astronaut in 1996. He participated in three space missions.

In one of these missions, he paid a special tribute to his Jewish father, Irving Polansky, who died in 2001 — before his second space mission, in 2006, Polansky called the U.S. Holocaust Museum in Washington, asking for an artifact to take with him to honor his late father. They sent him a replica of “Refugee,” a stuffed bear that a Holocaust survivor, Sophie Turner-Zaretskym donated to the museum. Later, in 2007, Polansky and Zaretsky met at the museum.

Ilan Ramon was the first and only Israeli astronaut. He died tragically in 2003 along with six other crew members when the Space Shuttle Columbia disintegrated upon re-entry into the atmosphere.

A fighter pilot in the Israeli Air Force, Ramon was the son of a Holocaust survivor and a veteran of the Israeli War of Independence. Ramon spent 16 days on the Columbia shuttle, where he served as a payload specialist. Despite being secular, he requested kosher meals and took a kiddush cup to space. Ramon also took a Torah scroll that had survived Bergen-Belsen with him on his space flight, but it was unfortunately destroyed in the disaster.

“His image, projected from above, was the reflection of Israel at its best — Israel as we would have liked to see it — the Israel we love,” former Prime Minister Ariel Sharon said at his funeral.

“The most moving moment of the flight came when Ilan read a letter he brought from a Holocaust survivor, who talks about his 7-year-old daughter who did not survive,” his son Assaf said at the funeral service. Reading it aloud as his mother, Rona, translated into Hebrew, he said: “How could such a beautiful planet survive? It is such a beautiful thing. It makes me want to enjoy every bit of the earth for how great it is.”

Assaf Ramon followed in his father’s footsteps and became a military pilot; tragically, he was killed in 2009 at age 21 during a routine training flight. Rona Ramon died of cancer in 2018. They are survived by Ramon’s three other children, Tal, Yiftach, and Noa.

Jessica Meir is a 44-year-old astronaut from Caribou, Maine who has studied emperor penguins, elephant seals, and has trained geese to fly in wind tunnels as part of her post-doctoral studies. And yes, she’s Jewish.

Meir’s mother is Swedish, and her father is Israeli of Iraqi Sephardi heritage. She grew up going to synagogue. Meir was recruited to become part of NASA Astronaut Group 21 and made to space in 2019 as part of Expedition 61/62. She spent over 200 days in space. On her space mission, Meir took with her an Israeli flag in honor of her father’s family, a coin commemorating Ilan Ramon, a postcard from Yad Vashem and a pair of novelty Hanukkah socks. The image of Meir in these socks staring into space is absolutely iconic.

Happy Hanukkah to all those who celebrate it on Earth! #HappyHanukkah pic.twitter.com/FKC2M5iXni

Back in March of 2020, when the COVID-19 pandemic was first hitting the United States, Meir posted a picture of Tel Aviv from space, paying special tribute to her father and his most uttered expression, “This too shall pass.”

Gazing down at the city in which my father was raised, I take to heart one of his most uttered expressions, “This too shall pass”. Wise words to remember, in both good times and bad. Goodnight #TelAviv #Israel! #GoodnightFromSpace #TheJourney #EarthStrong pic.twitter.com/oHoMLdBytD

Meir made history when she participated in the first all-women spacewalks and was chosen as one of Time magazine’s 100 Most Influential People of 2020.

Though he may not technically be an astronaut — as space tourism begins to, um , take off, the term is being redefined — Jared Isaacman made history as the commander of SpaceX’s Inspiration4, the first space flight comprised entirely of private citizens that orbited the earth. The Jewish dad from New Jersey is a trained pilot and a billionaire and personally footed the bill for all four passengers’ flights. But it was not without a good cause: The mission was part of a fundraiser for St. Jude Children’s Research Hospital.