9 New Hanukkah Books for Kids of All Ages 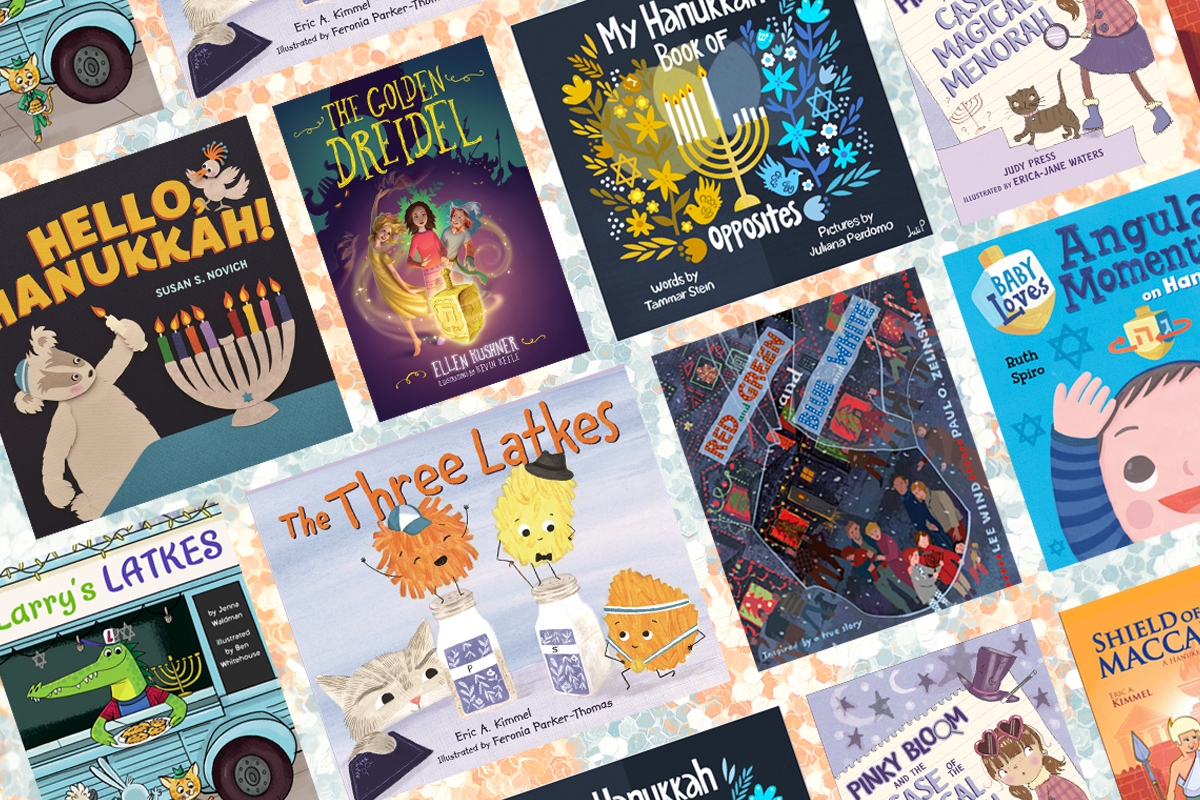 When “Hershel and the Hanukkah Goblins” was first published 32 years ago, the picture book, written by Eric A. Kimmel and illustrated by the late Trina Schart Hyman, delighted scores of Jewish children and garnered a prestigious Caldecott honor award in 1989.

In print ever since, “Hershel and the Hanukkah Goblins” — about a Jewish wanderer in the Old World who outwits evil goblins and saves Hanukkah for the villagers —  has become a classic.

Now, with the publication of “Shield of the Maccabees: A Hanukkah Graphic Novel,” Kimmel, who’s penned more than 150 books, is taking a new spin on his beloved holiday, reshaping his masterful storytelling for the newer comic-style genre that is so popular for older readers and teens.

“Shield of the Maccabees,” is a collaborative effort with Dov Smiley, a Jewish educator who’s written and illustrated several Jewish-themed graphic novels and comic books (including “Jewish Holiday Comics” and “The Book of Jonah”).

It’s one of nine engaging and lively new books for Hanukkah, the eight-day Festival of Lights that begins this year at sundown on Sunday, November 28. These assorted nine new titles cover kids of all ages — that’s one for every night of Hanukkah, plus the shamash, the helper candle that lights the others on the menorah.

The littlest ones in the family can learn to count and recognize colors by lighting the Hanukkah menorah with a young badger who celebrates Hanukkah along with an orange-crowned feathered friend. Who knew the hoopoe is Israel’s national bird?

2. “My Hanukkah Book of Opposites”

Young kids celebrate the Festival of Lights in this colorful board book with Hanukkah-themed opposites. Up and down are illustrated with a dreidel spinning and falling down. It’s dark outside the house, but inside it’s light, with a boy standing next to the lit menorah. The book also features a diverse array of Jewish children.

In what may be the first Hanukkah-themed board book that centers on STEM topics (the acronym for teaching science, technology, engineering and math), kids get the basics on what makes the dreidel spin (torque) and fall down (gravity). It’s the latest installment in the “Baby Loves Science” series.

4. “Red and Green and Blue and White”

In this uplifting story by Lee Wind that’s illustrated by Caldecott-winning artist Paul O. Zelinsky, two best friends — Isaac, who is Jewish, and Teresa, who is Christian — look forward to celebrating their winter holidays. But when someone smashes the window displaying a Hanukkah menorah at Isaac’s home, Teresa’s touching sign of friendship and courage sparks an unlikely community-wide show of support for Isaac’s Jewish family. The fictional tale is based on the inspiring true story from Billings, Montana, in 1993 that made headlines across the country.

Every Hanukkah, a lovable crocodile named Big Larry (think Big Bird but in a green, lizard-like form) serves up the perfect fried potato latkes at his food truck. But when Larry skips the potatoes in his Grandma Golda Gator’s traditional recipe and tries beets, kale, peaches and tomatillos fresh from the farmer’s market, his new versions just don’t measure up to the delicious, traditional ones. Will it take a miracle to get latkes just right for his big Hanukkah party? Jenna Waldman’s delightful, rhyming Hanukkah romp is enlivened with Ben Whitehouse’s large and bright illustrations.

By Eric A. Kimmel; illustrated by Feronia Parker-Thomas
Kar-Ben; ages 4-8

Yes, beloved author Eric A. Kimmel has not one but two new Hanukkah books this season! In this humorous Hanukkah tale, three colorful cartoon-like potato latkes ask the household cat which tastes the best: the red latke, the yellow latke or the gold latke, each made with different kinds of potatoes. What will the clever cat decide? The ending may surprise you! Kimmel’s simple storytelling comes to life with Feronia Parker-Thomas’ animated, colorful illustrations.

7. “Shield of the Maccabees: A Hanukkah Graphic Novel”

This colorful, 125-page action-packed graphic novel is set in ancient Judea at the time of the Hanukkah story, when Jews lived under Greek rule. In the opening frames of this imagined story, Jonathan, a Jewish boy, comes to the rescue of Jason, a Greek boy who is being bullied, a brave act that kindles the boys’ friendship. Will their friendship endure the battle lines drawn when Greek King Antiochus forbids Jews from practicing their religion?

Eric A. Kimmel takes readers beyond the barest outline of the Hanukkah story offered up in most books for kids. “It ignores the interrelationships between Jews and Greeks throughout the classical world,” he told Kveller of traditional kids’ Hanukkah tales, adding that he hopes the book will inspire readers to think about what they can learn from others in different cultures and religions.

Dov Smiley, who grew up reading Kimmel’s “Hershel and the Hanukkah Goblins,” told Kveller he was thrilled to team up with the award-winning author. “Eric Kimmel is a fearless storyteller,” he said. “He doesn’t want readers to imagine Jewish life in one way. He wants them to see it in as many ways as possible.”

8. “Pinky Bloom and the Case of the Magical Menorah”

In this second-in-a-series chapter book for older elementary readers, Penina “Pinky” Bloom has the reputation of being Brooklyn’s “greatest kid detective.” As Hanukkah approaches, she’s put to the test when an old Israeli coin on display in her family’s synagogue is stolen. Is there a clue in the antique menorah Pinky’s family is safeguarding for a neighbor? Pinky and her younger brother, Avi, and a cast of other characters set out to solve the mystery in this engaging, light-hearted Hanukkah caper.

Originally performed as a theatrical production with Shirim Klezmer Orchestra — and narrated by writer Ellen Kushner for many years on public radio — “The Golden Dreidel” is back and better than ever with new illustrations by Kevin Keele. The book’s protagonist, Sara, is a plucky, modern Jewish pre-teen who envies her friends with Christmas trees. When her mysterious Tante (Aunt) Miriam gives her a golden dreidel at the family’s Hanukkah party, Sara finds herself time-traveling to ancient Israel for an adventure involving demons, riddles and a kidnapped princess who’s been turned into a spinning golden dreidel. As Sara finds the courage to save the princess,she gains new appreciation for the meaning of Hanukkah and family.