Honor the True Meaning of Hanukkah and Flaunt Your Jewishness 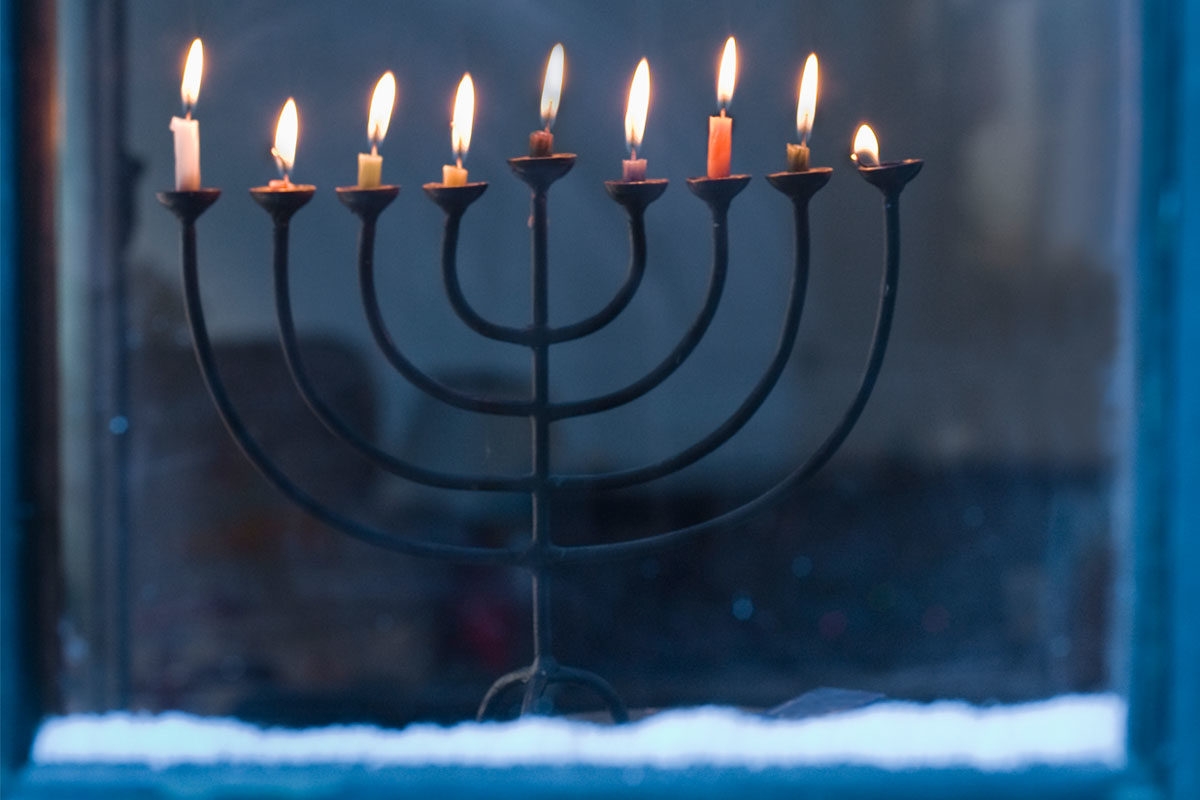 When I was a child, I loved going with my family to the special Shabbat-Hanukkah service at our synagogue. All the families would line up their menorahs on a long table in the sanctuary in front of the bimah (platform) and light their candles. With the sanctuary lights dimmed, the lights from the menorahs looked like a small glimmering city. The service ended once all the candles had burned down, which generally was about the length of a typical Reform family service, about 45 minutes to an hour.

But one year, my parents accidentally brought long-lasting candles to the service, the no-drip kind that burn for hours. I’ll never forget the sight of all the other candles having long melted away, our menorah with its candles not even half way down, and all the families waiting to charge down to the banquet hall for donuts and coffee, glaring at the menorah with the lights that just would not go out. My parents’ disastrous misjudgment mortified me, and I pretended I did not know them.

Looking back, this image has a different resonance for me now.

Most people are familiar with the miracle of Hanukkah, which doesn’t appear in the Torah but in later writings: The Temple in Jerusalem had been destroyed, and there was only enough oil to light the ner tamid (teternal flame) for one day, but the oil lasted eight days until the Maccabees procured more oil. That is why we light the menorah and enjoy its radiance for eight days, that’s why we eat things fried in oil like latkes (potato pancakes) or sufganiyot (jelly donuts) or bimuelos (fried sweet dough balls).

But the full legend of Hanukkah, which I learned when I was older, tells of the Syrian King, Antiochus, sending his soldiers to Jerusalem to take over the Temple and dedicate it to Zeus. Antiochus made it illegal to be Jewish. Antiochus ordered the Jews to convert and assimilate to the dominant culture, or they would be killed. A small group of Jewish rebels, the Maccabees, rose up against Antiochus, took back the Temple, and the Jewish people were able to worship freely once again.

I cannot hear the story of Hanukkah today without thinking of the times we are living in now. Our government and its policies, and even our culture, tells so many groups of marginalized people that they cannot be who they are, or who they are is not OK, not valid, not legal.

As a Jewish person living under Trump’s presidency, I have often felt this way. I’ve heard people shouting, “Kill all the Jews!” on the streets of my neighborhood in Queens; grieved over the horrific, recent synagogue shootings; watched the media coverage of anti-Semitic sentiments at Trump rallies. At times, all of this, and more, has made me want to hide my Jewishness and use my white privilege to blend in — to wear my beloved shema (one of the central Jewish prayers) necklace tucked inside my shirt, keep quiet about Jewish topics in public, even look into moving to Canada (good thing I married a Canadian! How lucky is that?). I was worried that we were experiencing something akin to the rise of Nazi Germany here in the U.S.

But then, one day I saw photos of my rabbi being arrested with eighteen other rabbis at a protest against Trump’s Muslim travel ban. She was wearing her colorful tallit (prayer shawl), her arms in plastic ties. She bore a defiant, triumphant smile on her face as they escorted her into the police van and, seeing the pictures, I felt a surge of energy, inspiration, and hope.

Her light gave me light. Seeing my rabbi being so proudly, defiantly Jewish made me realize that if I hid my Jewishness, I would be perpetuating exactly what those who hate us wanted: that we should hide, that we should cower, that we shouldn’t be visible. I didn’t want to promote this kind of suffering in myself or in others any more. So I decided to try being more openly Jewish in small, personal ways. I started wearing my shema necklace outside my shirt. When my coworkers asked me what I did over the weekend, I would tell them about the Shabbat service and potluck I attended, instead of just vaguely saying, “I saw some friends.” I began studying Hebrew and leading parts of prayer services for my Jewish community, and I went to Jewish events that took place in outdoor, public spaces.

None of this has been comfortable or easy, but the joy and connection that I’ve felt as a result has made it all worth it. My rabbi’s bravery, and the bravery of many others I’m lucky to know — my friend who is trans and is raising funds online for her surgery, the artist in my neighborhood who creates work about her relationship to mental illness, a college friend who recently lost his mother who openly shares about his journey with grief — gives me the courage to connect more fully with and rejoice in all the parts of myself.

In the story of Hanukkah, the real miracle wasn’t that the oil lasted for eight days. That part of the legend was written even later than the story of the Jewish uprising. The true miracle was the bravery of the people who stood up to the aggression and judgment of their oppressors. The Maccabees didn’t let their response to threat default to flight mode; they didn’t just pick up and move to Canada. It would be so much easier to run away, to hide, to avoid, to decide it’s all too hard and just go binge watch The Marvelous Mrs. Maisel (OK. I’m also doing that, too. Everyone needs an escape sometimes.) But it’s important to remember that those who bravely shine their light make it possible for others to access their own.

The word Hanukkah means “dedication,” referring to the re-dedication of the Temple to its original intention: a place for Jews to openly and joyfully express their faith. This Hanukkah, as I light the candles on the menorah, I will also re-dedicate myself — to the values I care about, to the qualities that make me who I am, to my wisdom and my suffering, to living in my body. I will dedicate myself to inhabiting my aliveness as fully as possible, as an offering towards others who also struggle to be who they are.

Living Jewishly in public may look different for every Jewish person, and it may not be the right choice for everyone. That’s fine; I’m still exploring what this means for me. But living outwardly as a Jew is a strong intention I have, because at this point I can’t imagine stuffing my joy at being Jewish back inside the tight box in my chest it was crammed into all these years.

Here is my Hanukkah blessing for all of us: Go ahead, you brave, wonderful candles. Shine your light. Shine brighter and longer than is convenient for other people, for our society, for whomever. It might make some people uncomfortable. Great. That’s how people grow. So keep on going. Keep on being you. Keep on glowing your wisdom and compassion. In your light, we see light.