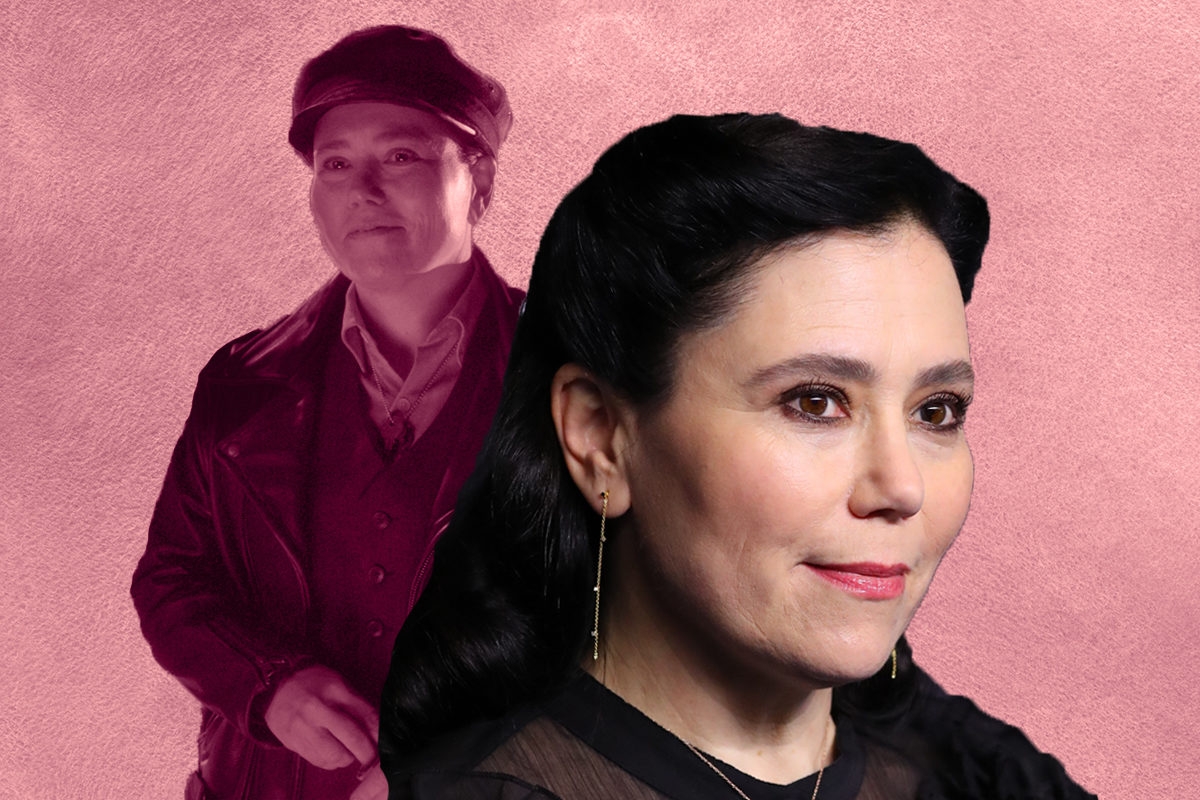 Emmy award-winning actress Alex Borstein didn’t even want to go to the Emmys this year. She had just finished shooting season three of The Marvelous Mrs. Maisel, and the Jewish mom was just getting back into a routine with her two kids. The family lives in Barcelona, and Borstein really did not want to fly back to the States for an awards ceremony.

But Borstein — along with her Maisel co-star, Marin Hinkle — were both up for an award for “Outstanding Supporting Actress in a Comedy Series” at the 2019 Emmys.

“I finally was going to do it,” Borstein tells Kveller in an interview this week at New York’s Whitby Hotel. “And then when I was on the plane, I was like, we’re not gonna win anything!  This is Fleabag‘s year! Why should I even go with Olivia Colman [in my category]?”

Still, as she flew over the Atlantic, Borstein realized that she probably should think about something to say, in the unlikely event that she won (again!) for her portrayal of manager Susie Myerson. 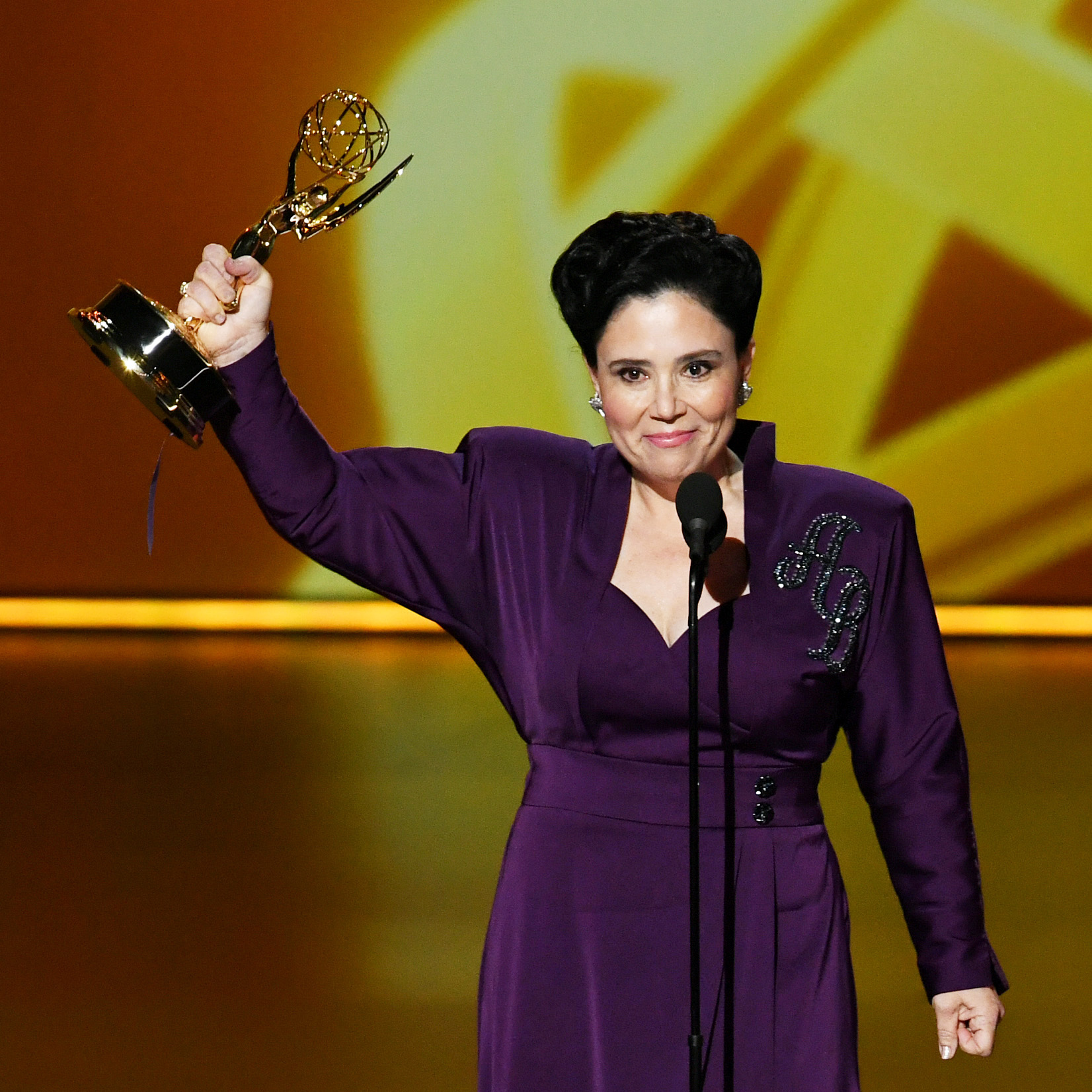 During her acceptance speech, Borstein told the audience, “My grandmother turned to a guard… She was in line to be shot into a pit. And she said, ‘What happens if I step out of line?’ And he said, ‘I don’t have the heart to shoot you, but somebody will,’ and she stepped out of line. For that, I am here, and my children are here. So step out of line, ladies. Step out of line!”

I asked her if she expected her speech to go viral. Borstein answered with a definitive no. To her, the reaction was crazy — she can’t believe there are t-shirts for sale on Etsy with “STEP OUT OF LINE” emblazoned on them. Numerous commentators called it the most memorable moment of the night. It’s been dubbed a new rallying cry, and the quote is still being shared on social media.

“It’s so bizarre,” Borstein explains. “I guess it’s a good surprise, but it feels a little bit strange, putting something that personal out there and seeing it in other people’s hands. It’s a little bit like… oh.”

“We’re in a time now of white supremacists and Holocaust deniers on the rise,” she adds. “The more people associate that history with a face that they know is good.”

Borstein, as Kveller readers likely know, isn’t shy about sharing her Jewish identity on social media. She’s posted about her sukkah, the plague masks her kids wear at the Passover seder, Hanukkah, throwbacks from her bat mitzvah, and so much more.

“I like sharing those moments, not as I’m going to be a Jewish role model and put this out there, but it’s part of my life and moments that I’m proud of and take pleasure in, so it’s nice to share,” Borstein says. “We do Shabbat every Friday night. I’m not [someone] that goes to temple all the time — I’m a High Holidays temple goer, and that’s about it. But there are traditions. Having a mother and a grandmother who are Holocaust survivors, I feel a large responsibility to continue that culture and those traditions — not necessarily the dogma, but what it feels like to be Jewish. I want to instill that in my kids.”

As it happens, working on The Marvelous Mrs. Maisel is another way Borstein stays in touch with her Jewish heritage. 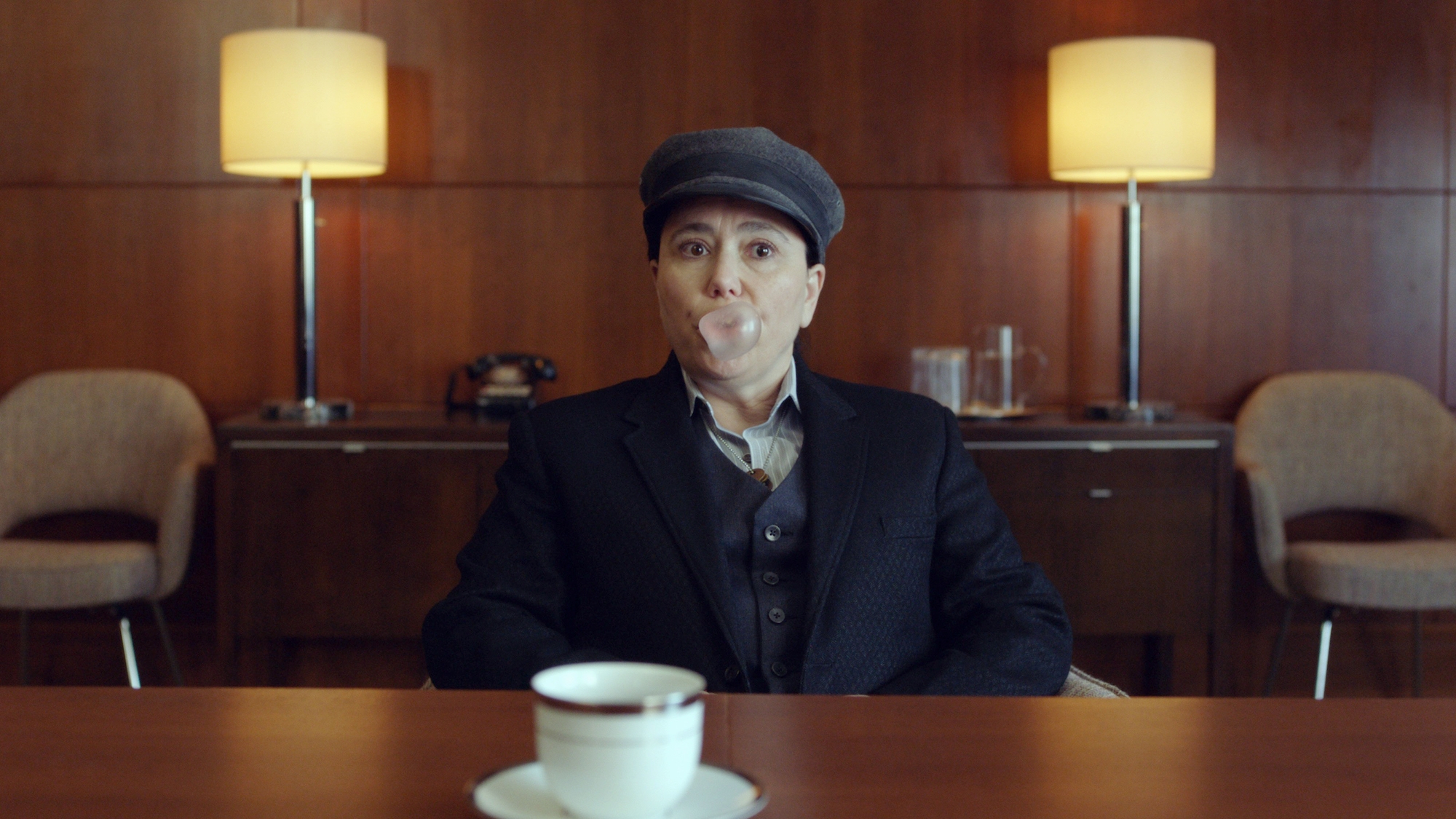 Being on this very Jewish show “is like comfort food,” she says.

She continues: “There’s a moment in this season where Midge is put in a position of singing a Christmas carol, and she’s not quite sure the lyrics. That’s me! I don’t really know half of the Christmas stuff that’s out there. This show is so familiar and so comforting in that regard to me. Some of it’s heightened, some of it’s ridiculous, some of it’s silly, but a lot of it rings true. A lot of [Maisel] feels very Jewish and has the heart that I recognize.”

Borstein’s character, Susie Myseron, is Jewish — but a very different type of Jewish from Midge Maisel (Rachel Brosnahan). “The two of them have had very different experiences in terms of where they are in the economic stratus, it’s a really interesting combination,” Borstein says.

Still, some critics of the show have maintained that it traffics in stereotypes — particularly Midge, whom some see as a stereotypical Jewish mother. When I asked Borstein about how she feels about the portrayal of the Jewish characters, she replied, “When people get upset about stereotypes, it’s hard for me. Because there’s a lot of stereotypes [that] exist because it’s real things people have experienced.”

With season three, in particular, Susie and Midge are at the heart of the show. (Borstein has taken to calling them “Smidge” when she posts about Brosnahan on Instagram.) Midge is on tour with singer Shy Baldwin. As her manager, Susie accompanies her to Las Vegas, Miami, and the other tour stops — all while balancing her responsibilities back in New York. 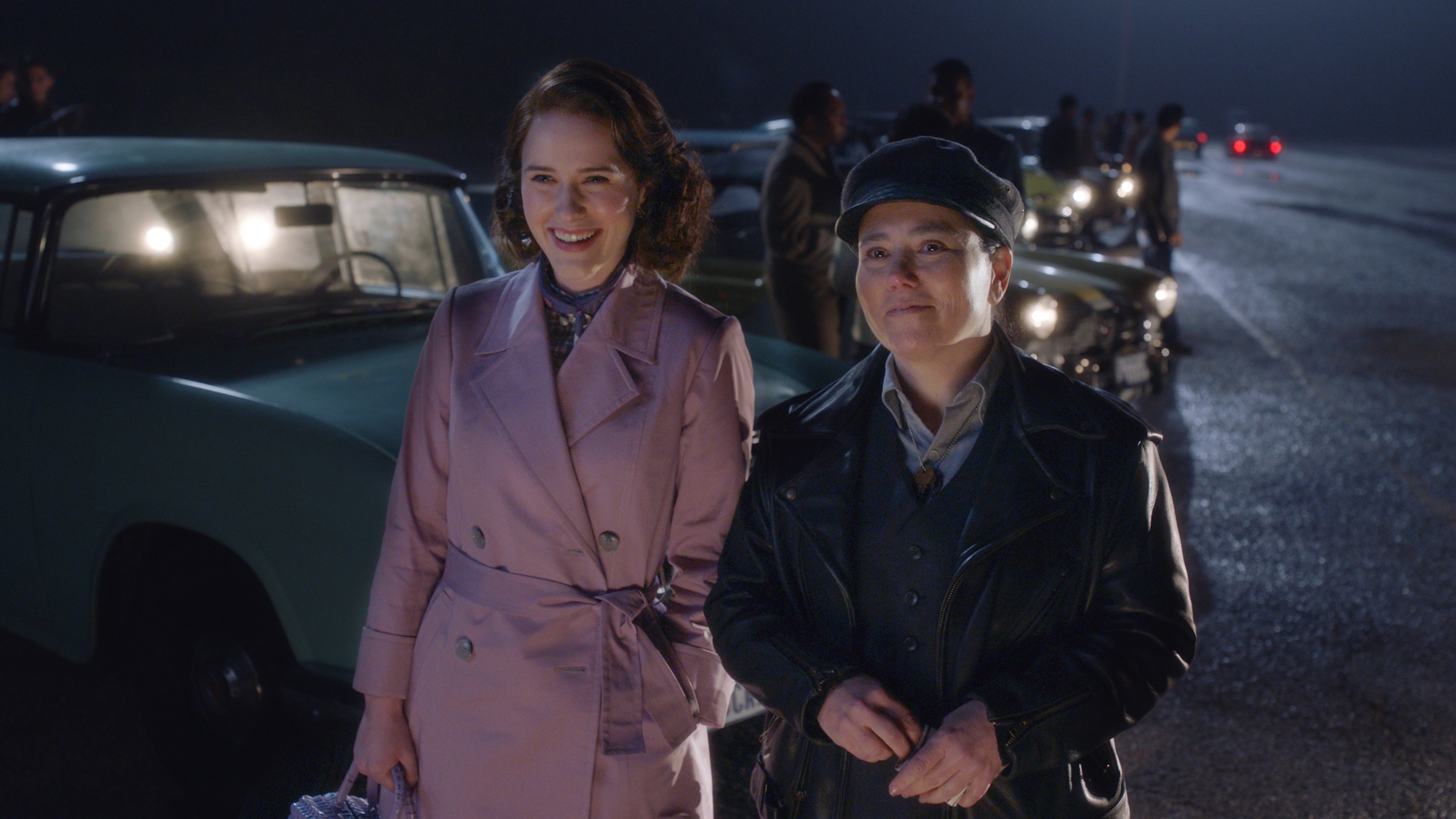 Borstein’s shift from playing a supporting character to becoming a main focus has been challenging, however. The more scenes she’s in, the more she’s away from her kids.

“When I signed on, I thought it would be a much smaller role,” Borstein says. “I thought that I’d fly in, do a couple weeks work, and leave. I had no idea it would be as much as it has become.”

“I’d like to be used sparingly,” she continues. “Like a spice, not an entrée, you know? I like to come in, deliver a funny line, and get off.”

However, in season three, she’s much more than a few funny lines — she is a critical anchor of the plot. While Borstein may not love that (“It’s hard to be responsible for that many scenes and feel the weight of it and that much dialogue. It’s a little terrifying sometimes,” she says), Maisel viewers clearly want more of Borstein’s gruff Susie.

The second she puts on Susie’s clothes, she feels transformed into a different person.

Borstein’s kids, Henrietta and Barnaby, aren’t quite old enough to watch Maisel yet, but Bornstein says they’ve watched a few episodes with their dad, Jackson Douglas; the couple were married for 18 years and divorced in 2017.

Since Borstein and Douglas are raising their kids in Spain, they’re part of very small Jewish community. “It is nice to have a show with a Jewish family for them to see,” she says. “They go to school [where] there’s not a lot of Jewish kids around them. It’s really nice for them to see some representation and feel like, ‘Oh, yeah, well, we break the fast,’ and, ‘I totally know what that means!’ Again, it’s comforting.” 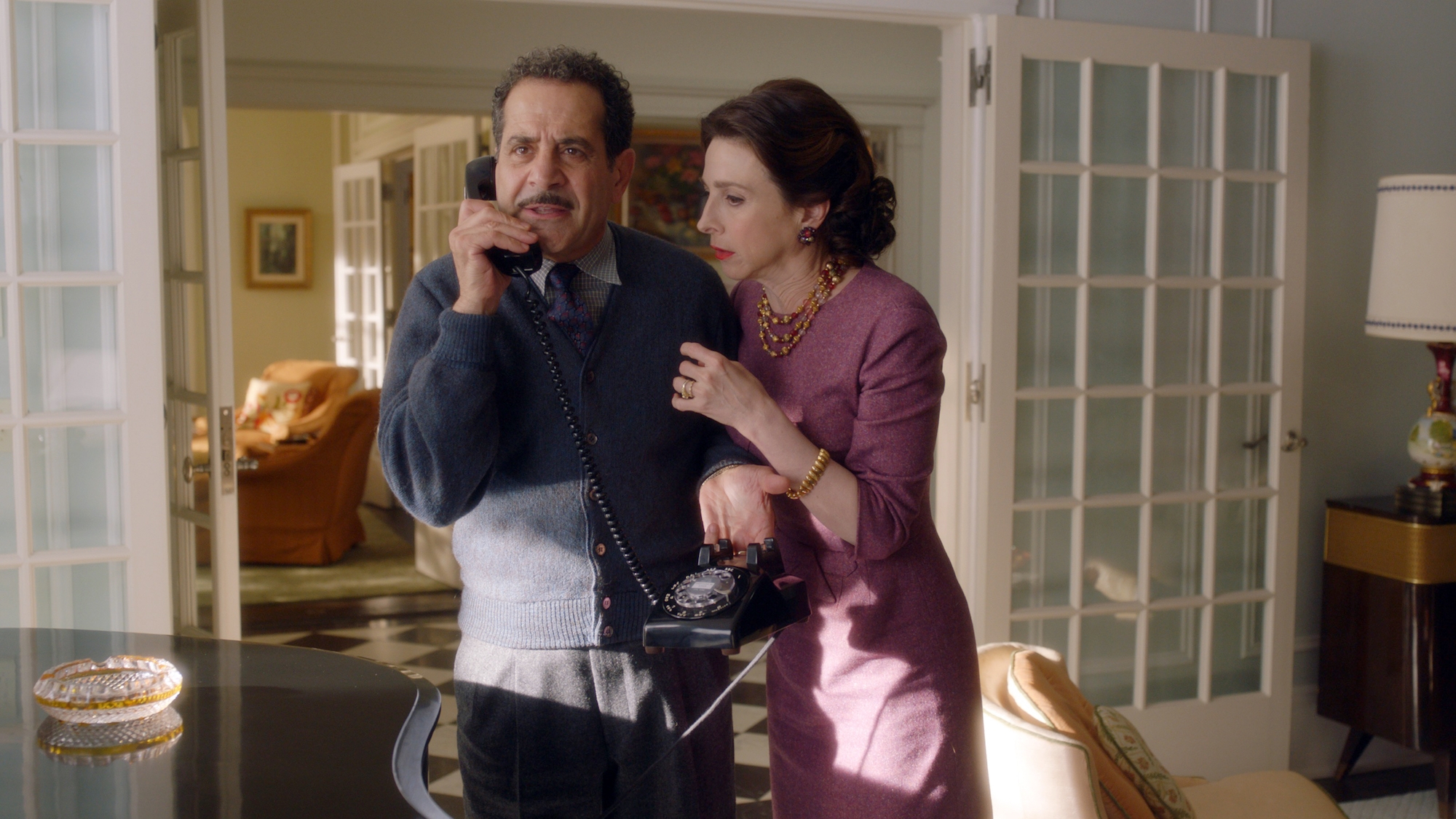 Borstein herself has never seen an episode of Maisel — but her parents, Irv and Judy Borstein, are the show’s biggest fans. “My dad’s obsessed,” she says. “He has me on every Google Alert.” (Hi, Irv, if you’re seeing this!) 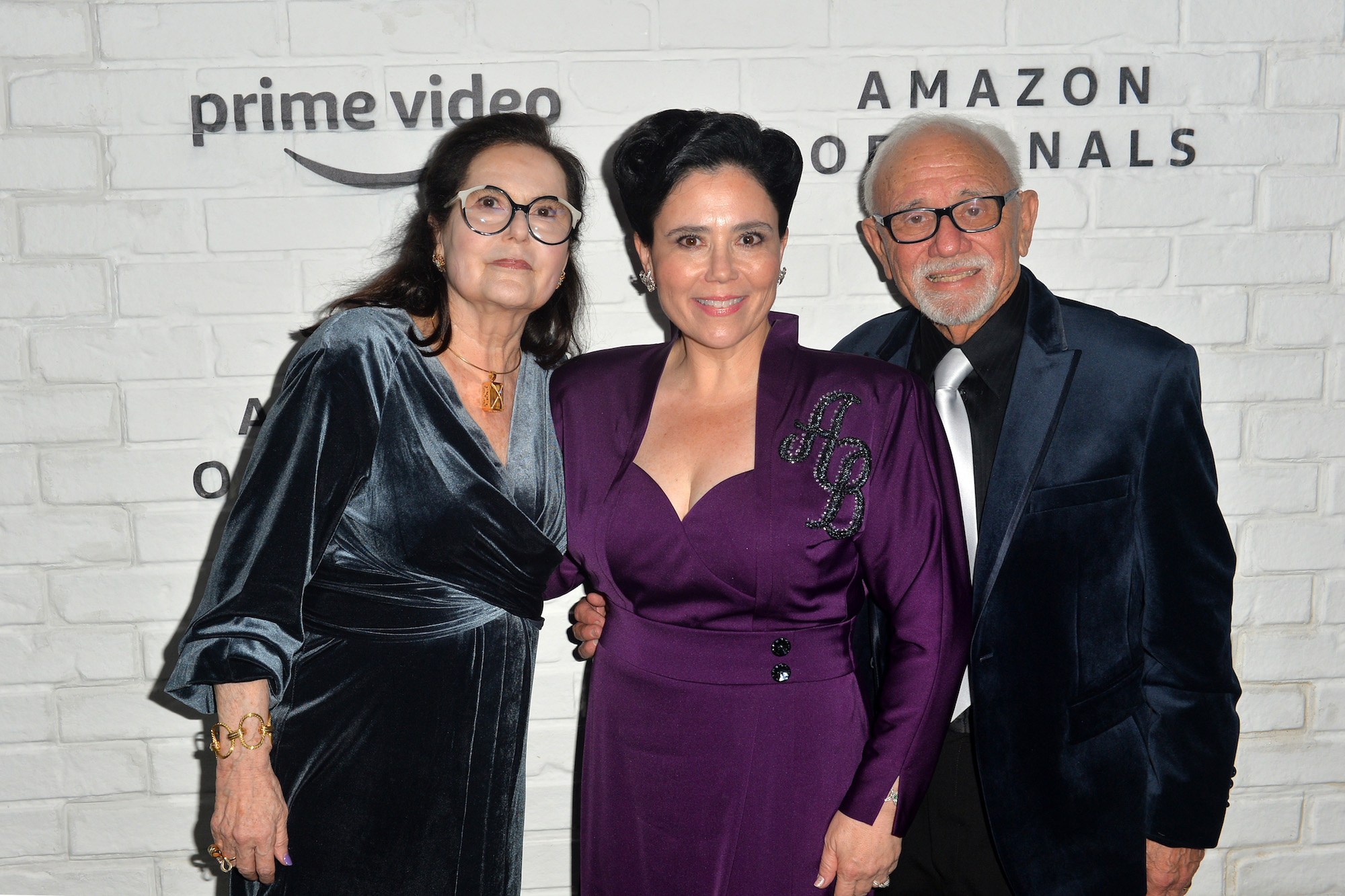 Alex Borstein and her parents (Photo by Jerod Harris/Getty Images)

“They’re wonderfully supportive and very warm, but also very can be very judgmental and critical,” she adds. “Your biggest fans and your harshest critics are Jewish parents.”