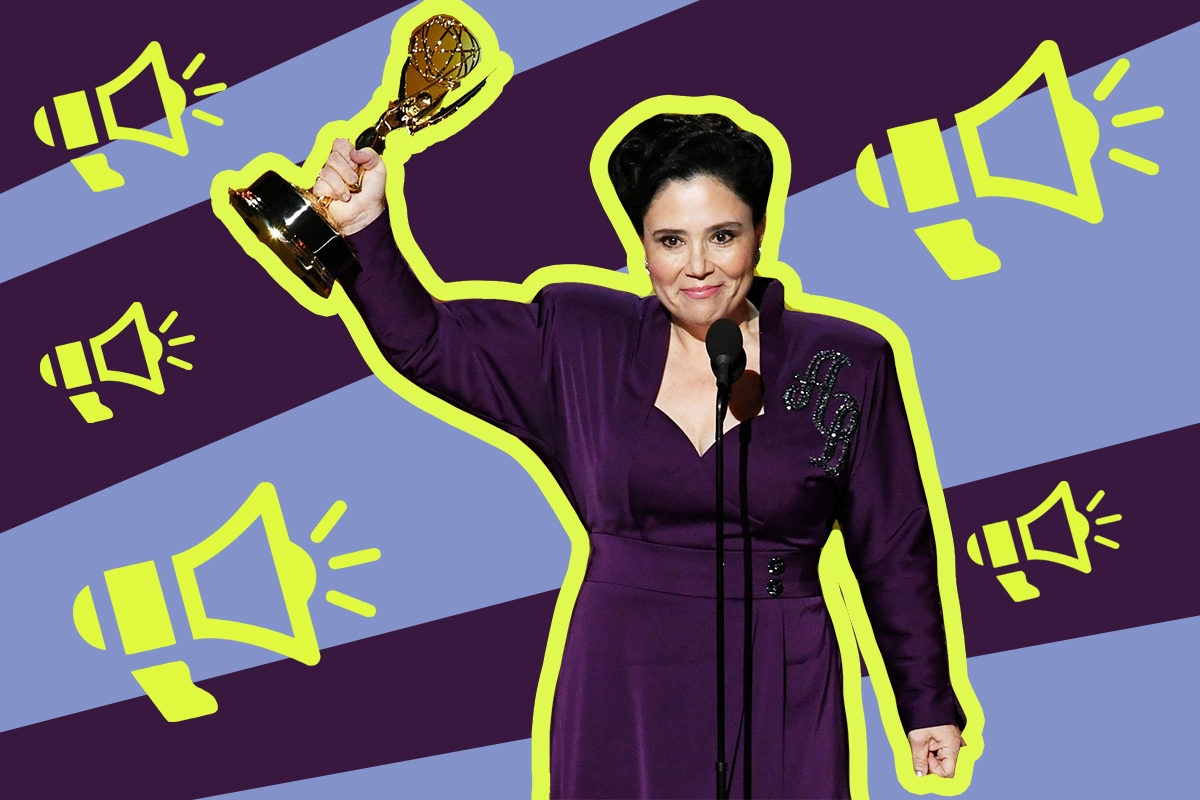 When actress Alex Borstein won her second consecutive Emmy for her role in the hit show The Marvelous Mrs. Maisel, she gave a stirring speech mentioning her mother and grandmother, who were both Holocaust survivors.

In the hours since, her stirring words have gone viral.

“My grandmother turned to a guard… She was in line to be shot into a pit,” the Jewish mom of two said. “And she said, ‘What happens if I step out of line?’ And he said, ‘I don’t have the heart to shoot you, but somebody will,’ and she stepped out of line.”

When I first heard those rousing words, they made me mad. My grandmother lost her family in the Holocaust. I knew it wasn’t easy to evade death merely by showing a little gumption, as Borstein’s Emmy acceptance speech might imply. Thank God her grandmother was able to escape a massacre with her life. But for millions of other Jews, of course, talking their way out of death at the hands of brutal Nazis was utterly impossible.

I’ve been thinking a lot about my grandmother since hearing Borstein’s speech. While obviously not all Jewish women were able to escape the Holocaust — as well as other calamities that have befallen our people — some remarkable Jewish women did manage to defy the odds and survive.

And the more I thought about it, I realized how time and again throughout Jewish history, it’s been Jewish women who showed extraordinary courage and commitment, ensuring the survival of our people. And my own grandmothers — like Borstein’s grandmother — were some of those women.

My Grandma Francie, my dad’s mom, was a student at the University of Vienna in 1937. She was in the medical school there, on track to become one of Europe’s first female doctors. However, the enthusiasm her classmates and neighbors showed for Hitler terrified her, and she announced that she was dropping out of medical school to become a servant in England. (At the time, the U.K. was willing to admit Jewish women with the provision that they work as servants to relieve a domestic worker shortage.)

When one Jewish neighbor protested that she shouldn’t give up her life and prospects in Vienna, Grandma told her: “Look, if you were on a runaway train, you wouldn’t stay on and see what would happen.” Jewish life in Europe felt like that runaway train, Grandma maintained, and she, for one, wasn’t about to stick around to see what came next.

Sewing some money and jewelry into the lining of her coat — in contravention of strict laws prohibiting Jews taking money out of Austria — Grandma set forth into the unknown. She didn’t speak English and knew no one when she arrived in England, but she soon found other Jewish women there. These women supported each other and created a new Jewish group of friends.

All her life, Grandma stressed that lesson to me: “Jews need a community” she’d say. No matter where we are, Grandma taught the Talmudic principle of kol Yisrael arevim — all Jews are siblings, and we are responsible for one another.

England also gave refuge to Bubbe Yitta, my mom’s grandmother. In my closet, I have a crumbling, yellowing document that begins “13th January, 1922.”  It’s part of my great grandma’s application for a visa to enter the U.K., and it’s a testament to her bravery and the remarkable courage of thousands of Jews like her in seeking a new country where they could live more easily as Jews.

Bubbe Yitta’s papers read like something out of Fiddler on the Roof. They declare that my great-great- grandmother, Miriam, had eight children: Moshe, Chana, Mindel, Esther, Yetta, Shava, Ruchel, and Musha. “Daughters Ruchel and Musha and widow Miriam are in Poland, they are poor and cannot earn a living,” the papers state. Stamped and signed by the mayor of their tiny Polish town, these forms allowed Yitta to move to England, where jobs were more plentiful and where Jews didn’t have to live in fear of pogroms and hatred. It couldn’t have been easy moving to a new land — my mother recalls that, even as an older woman, Bubbe Yitta’s English was poor — but nothing was too much for her family.

Her remarkable courage to leave Poland lives on in her family today, and I am proud to be named after her.

But my grandmothers — and Borstein’s — are hardly alone in “stepping out of line.” For thousands of years, Jewish women have bravely stood up to save their lives, and the lives of their Jewish families and communities.

In ancient Egypt, our sages teach that Jewish men began to despair at the never-ending slavery they endured; many saw no point in continuing to have children who would only know misery as they did. It was Jewish women who never gave up, and encouraged their husbands to build Jewish families, even when it was dangerous and difficult to do so. When Pharaoh ordered Jewish babies thrown into the Nile, it was Jewish midwives who braved the wrath of Egyptian guards, helping mothers conceal and save their babies.

Then there is Chana, the mother of the prophet, Samuel — the way Jews pray today is modeled on her. She insisted on praying aloud for her child, even when she was wrongly accused of being a drunkard and mocked. And yet, she continued to pour her heart out in prayer, teaching generations of Jews how passionate Jewish prayer can be.

During the time of Hanukkah, it was another woman named Chana who defied authorities in to live an authentic Jewish life. She refused to bow down to Greek gods, and she raised seven sons who were similarly staunch in their faith, and tragically, were martyred one by one. Another Jewish woman commemorated on Hanukkah was Judith, the sister of the Maccabees, who single-handedly killed the Greek general Holofernes and turned back his entire division of Greek soldiers.

These women and countless other generations of Jewish mothers and grandmothers are our role models: their actions and bravery are engraved in our community’s collective identity. We’re here because they defied tyrants, risked death, evaded armies, and maintained their hopes for a Jewish future. When we walk in their shoes — choosing Jewish life no matter what the odds — we honor their memories and the sacrifices they made when they “stepped out of line.”