An Ode to 'Crossing Delancey,' the Most Jewish Rom-Com of All Time – Kveller
Skip to Content Skip to Footer

An Ode to ‘Crossing Delancey,’ the Most Jewish Rom-Com of All Time 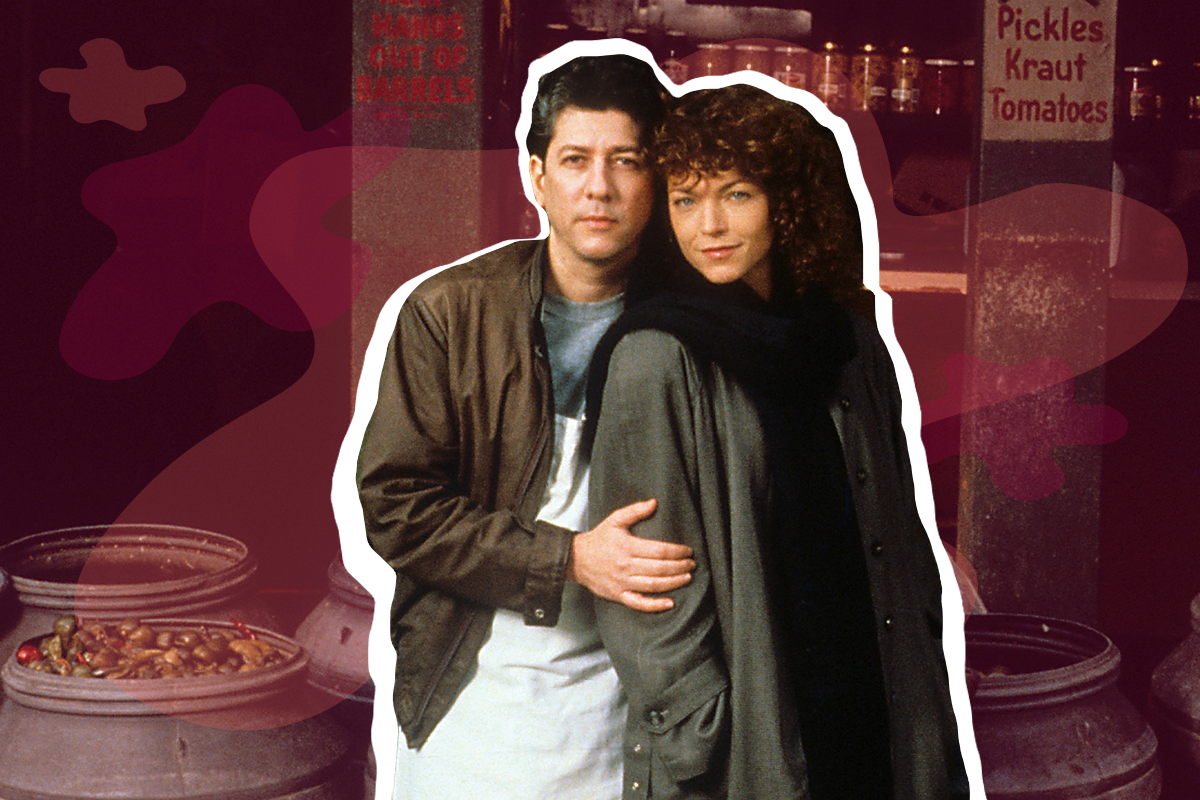 I was born in 1988, the year Crossing Delancey — arguably the most Jewish rom-com ever made — came out. And yet, despite being passionately Jewish and an ardent fan of rom-coms, it somehow took me 31 years to see this enchanting, underrated masterpiece of the genre.

Crossing Delancey is the story of Isabelle “Izzy” Grossman (played by Amy Irving), a 33-year-old single Jewish woman living in New York. Her grandmother (played by Yiddish actress extraordinaire, Reizel Bozyk), through the aid of a Jewish matchmaker (the darling Sylvia Miles), tries to set her up with a nice Jewish boy. And in honor of Tu B’Av — an ancient matchmaking day that is currently celebrated as the Jewish Day of Love — I want to celebrate this movie, which extols the virtues of matchmaking and celebrates Jewish love, both familial and romantic.

The Delancey in Crossing Delancey refers to, of course, the bustling street that starts at Manhattan’s East River, on FDR drive, and ends at the Bowery, which was once the epicenter of the deeply Jewish Lower East Side.

When I first watched the film, I was struck by how the movie’s Delancey Street was both instantly familiar and unfamiliar. I lived on the corner of Delancey and Ludlow when I first moved to New York, when I was in my early 20s. By then, the ghost of Jewish life was barely perceptible, easy to miss if you weren’t looking for it. In the movie, by contrast, the Lower East Side of the 1980s still had the aroma of Yiddishkeit: shop signs written in Yiddish, big grey barrels of pickles, bubbes with thick Yiddish accents. The Jewish nostalgia alone makes Crossing Delancey worth watching. But it’s hardly the movie’s only draw.

The movie has two Jewish women at its helm: Susan Silver, who wrote the screenplay, and director Joan Micklin Silver, who famously directed Oscar-nominee Carol Kane in the very Jewish Hester Street (another film about a Lower East Side street!). And while it’s undeniably a rom-com, Crossing Delancey doesn’t ascribe to the notion that a woman needs a man to be happy. Instead, it offers a romance in which both sides are strong and capable.

Izzy is an independent woman, whose life and struggles are relatable to any single Jewish woman who has ever tried to date in a big city. When Izzy moves into her own (rent-controlled!) apartment and into her own successful role in the literary world (she even has Isaac Bashevis Singer‘s unlisted phone number), she feels that the idea of finding a Jewish match through a matchmaker is the most preposterous, dated concept. And that’s not just because Judaism doesn’t seem to have a place in her super-busy single life. It’s also because, as she tells her bubbe, she and her single friends are successful and happy and don’t need a man to be fulfilled.

It’s an idea I relate to: When I came to New York, I had given up on the idea of marrying a nice Jewish boy. (To be fair, I’d only ever dated not-so-nice ones up until that point.) I wanted to focus on my career, and I didn’t have time for Jewish dating apps. Yet somehow, I found myself, 10 years later, curled up on the sofa with my nice Jewish husband, watching a 1980s Jewish rom-com.

As someone who is married to a Jew, I often wonder why there aren’t more movies about two Jews falling in love. All the great Jewish rom-coms are mostly about interfaith relationships (a term that I hate, by the way) and the ensuing backlash. What’s refreshing about Crossing Delancey is that it doesn’t seem to have anything negative to say about marrying a non-Jew, or not marrying at all.

Still, I love how attractive and alluring the nice Jewish boy in Crossing Delancey is. Peter Riegert plays Sam Posner. He’s a pickle man and he somehow makes pickling sexy. He says the Yiddish word bruche for “blessing” in a way that makes it seem steamy.

Nowadays, the nice Jewish boy or girl stereotype is neurotic, anxious, in need of constant guidance and calming down. But this nice Jewish boy has the temperament and wisdom and — dare I say? — the sensuality of a Jewish sage, who overflows with delightful metaphors about hats. He is not jealous or anxious. It’s a refreshing delight, because for those of us who, surprisingly or unsurprisingly, fell in love with Jewish men, it’s nice to see a more accurate, attractive portrayal of relationships like ours.

While Izzy meets Sam having already decided she is just not that into him, he seems to make his way under her skin. The movie is a push and pull between the two. Izzy can’t seem to let go of this guy, but she can’t really make up her mind, either. She tries to sneakily set Sam up with her quick-witted, impressive friend, Marilyn Cohen (played Suzy Roche). He is wounded but acquiesces. I guess he’s pretty chill like that — you might even say he’s cool as a cucumber. (Can’t pass up a good pickle pun!)

But the truth is, Sam is a nice Jewish boy — as in truly nice, not just someone who sees himself as a “nice guy” in that self-involved way. He cares about his clients and his neighbors, he helps Izzy’s bubbe out around the house. He is enamored with Izzy but he doesn’t stoop to stalking or harassing her, something that many rom-coms sometimes make seem romantic. (Newsflash: It is not.) He is not angry at her for rejecting him, only for playing with his feelings. He’s nice but he’s not a doormat —  nor should anyone anywhere in the gender binary be when dating or in a relationship.

But the other love story in this movie is Izzy’s relationship with her bubbe, which is so painfully, viscerally relatable that it made me want to immediately call my grandma. Bubbe keeps an inordinate amount of cash in her nightgown, which she readily hands to Izzy when she visits her apartment. She asks Izzy to pluck her chin hairs (honestly, the most relatable) and sends her home with enough food to feed a small army. Their relationship is close and intimate, even though they disapprove of each other’s notions about love and marriage.

Still, despite my heaps of praise, there are issues with Crossing Delancey — specifically, its two-dimensional portrayal of people of color. It’s truly cringeworthy and offensive: two of the very few black characters in the movie are a pair of oversexed black women, and a portrayal of a Rastafarian cab driver is such a caricature it’s honestly embarrassing. I acknowledge that for some viewers, this might be a reason to skip the film. Such portrayals are hardly atypical for ’80s film. Still, for a movie that deals with so many issues in such a progressive way, these two scenes are a disappointment.

But — Crossing Delancey is still worthy of love and belated recognition, for showing so many lovely things about Jewish culture in New York; for its many wonderful portrayals of strong, awe-inspiring women; and its representation of steamy Jewish romance, which, as someone who is passionately in love with a nice Jewish boy, is enthralling and validating.