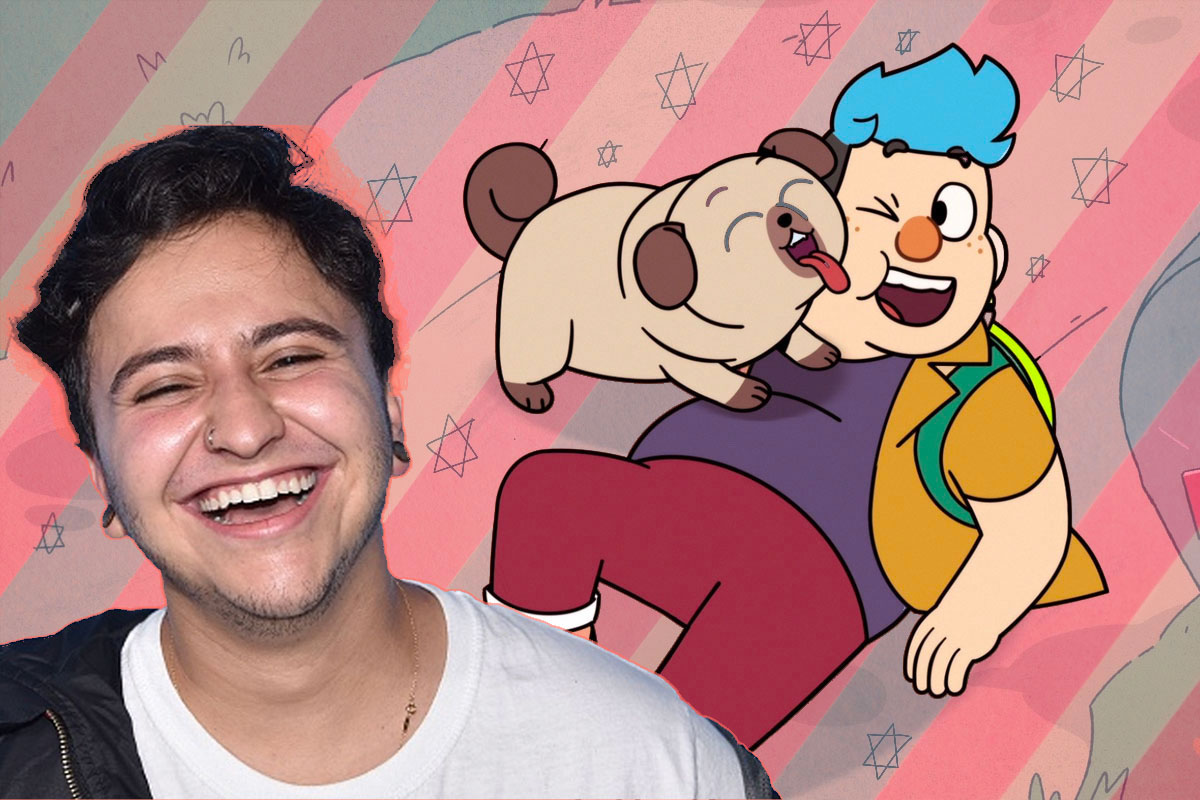 Ghostly theme parks, found family and talking pugs. Oh my! These are some of the things that can be found in “Dead End: Paranormal Park,” the animated fantasy-horror-comedy series about two employees (Barney and Norma) and their adventures in a haunted theme park.

Produced by Blink Industries, the show (based off comic book series “DeadEndia,” created by Hamish Steele) is a treasure trove of comedic ghoulish content, featuring snarky demons as well as hilarious high jinks. Yet what truly makes the cartoon unlike any other is the unparalleled humanity found within its cast.

Initially, I was excited to learn that the show would be headed by a trans-masc lead — a rarity in any show, much less an animated program geared toward a young adult audience. Yet I was even more astonished to know that this lead, Barney, would also be Jewish, not to mention be played by an actual trans and Jewish actor!

While queer animated content is becoming increasingly present, it is still rare to see representation that honors the intersection of queer and Jewish identities. Seeing multidimensional characters like Barney, who get to have wild adventures, flirt with a cute boy and wear his Jewish and trans identities proudly, means the world.

Kveller talked to the actor who plays Barney, Zach Barack, about playing this lovable character and what it means to see Jewish, trans representation on screen.

First of all, welcome to Kveller! Could you tell us a little about yourself?

I’m Zach Barack. I’m an actor, I also do stand-up comedy. I love movies, music, songwriting and watching drag. I know next to nothing about fashion or anime, but those are still two of my favorite things to observe and consume. I’m very, very queer, in every sense of the word.

Congratulations on your work as one of the lead characters, Barney, in the new show, “Dead End: Paranormal Park!” How did you get involved in this project? Were you aware of “DeadEndia” before you were cast?

Thank you so much! On a direct level, I got involved through the championing of two of my kick-ass agents at CESD: Sam Frishman [and] Pat Brady, who has since retired. They’re both incredible people to have in your corner.

In terms of the comics – I was somewhat aware of the source material because I existed online pretty heavily around the time of the web-comic release, but I didn’t read the print books until my callback. But when I heard I was getting a callback I was like, OK I’m putting my heart into researching this because I want this role so badly. It’s animation. It’s horror. He’s a Jewish trans kid and, most importantly one who is gay and into pro-wrestling. That’s my role.

Being able to play a trans kid in a show made for children is a dream come true. On some level, I get a little mad about the fact that I didn’t have it as a kid. But then I feel grateful because I think this might be one way to heal – to make this kind of media and hope no one else has to feel that way.

As a queer and Jewish animation fan, I can’t begin to tell you what it means to see a character like Barney on screen! What has the reception been like from other Jewish/trans/queer fans for your character?

People have been incredibly moving with their words. I think I was expecting the trans kids to be excited, but the Jewish kids [was] not something I’d even considered. I literally got a message relayed to me that a queer little kid was telling his mom it was so cool that Barney was also Jewish.

And I love getting to see people online type out that they love that Barney and his pug wore kippot during the gay wedding sequence in the musical episode. Like what a lovely, bizarre intersectional thing to discuss.

I’m not really religious – I grew up Reform so after I didn’t really do much religious study or anything after becoming a bat mitzvah (I don’t know if I should call it a bar mitzvah now, retroactively, since I came out). Mostly, we just went to synagogue on High Holidays until my parents split up. However, I think my experience of being Jewish is still so inextricably part of me because we were one of just a handful of Jewish families in our town. Which meant it was one of the first ways I felt “other,” even without being particularly religious. On some level it was really similar to being queer because it was sometimes talked about pejoratively.  What’s messed up is that consuming the humor at the expense of Judaism made me take longer to appreciate the way it actually belongs to us culturally. How we historically take the piss out of our persecutors and make fun of ourselves. It took me longer to appreciate that because I was pretty defensive. But that’s some of what I love about being Jewish the most. It’s a culture that is lush with humor and asking questions and pushing back against The Man. This year I wore like 10 wigs and did a one-man Purim show for my goy friends. That’s fun! We’re such a fun people!

Another thing I love is the prayers. The meaning, for sure, but also… how they can be sung. Our cantor – I think her name was Amy – had the best melodic interpretations of the prayers. And those melodies, like, genuinely influence how I listen to music and enjoy it.

Also I love that the Yiddish slips out of me when I talk about my dog. Like if he hits his head I’m like “NOOOO!!! YOUR KEPPY!!” Or he’ll fall asleep and I’ll be like, “he’s going shluffy,” and everyone around me is just kindly quiet about the fact that most of them don’t know what that means.

For holidays, well, Purim is campy and theatrical so it does rank highly. But, I was the youngest so I loved doing Passover because I got to do the four questions and show off as a kid. And I loved the ritual of going through all of the parts of the Seder plate and telling the stories and dipping in the wine to mark the plagues and leaving a seat for Elijah. Like, it’s theater. It’s drama. It is beautiful.

Can you tell us what have been some of your favorite parts about this show?

I love a pop star with a big ego who is obsessed with looking hot and young to the point that she’s gone fully supernaturally evil. That’s fierce. And having Coco Peru play her is a stroke of genius.

This might be obvious, but Alex Brightman is an absolute star and I feel so honored that I’m billed with him. Emily Osment plays Courtney, like, genuinely, to perfection. I am her biggest fan after this. I haven’t gotten to meet her, but I would give my firstborn to Courtney because she did such a good job being rotten and soft all at once.

Kody – my lovely bestie, Norma – gives a performance that gives me chills. It’s so real and honest and vulnerable, but then it’s animation. And I remember on the table read on Zoom thinking “people are gonna die for Norma.” Like, I was listening to someone who captures the whimsy of a horror comedy animated show AND someone who gives such a down to earth and honest performance of this character. And when I saw the whole show together, it was even more of that same feeling. She’s incredible.

What’s a question you haven’t been asked yet but wish you had been (and the answer)?

Being trans, I actually get asked a lot of questions that I think most actors do not get asked. So it’s hard for me to think of something that isn’t heavy or deep. I never get asked light stuff, is the truth. This was a good interview though. I’ve never gotten to talk about my old cantor or my favorite sad prayer melody before.

What advice would you give to other aspiring LGBTQ+ creatives?

Say “no” to stuff that sucks. You’re allowed to do that. I know we all have to pay our dues and sometimes we can’t stick our nose up at things. But if something offends you or compromises your identity, I think it’s OK to say no. It’s OK to want to make quality work.