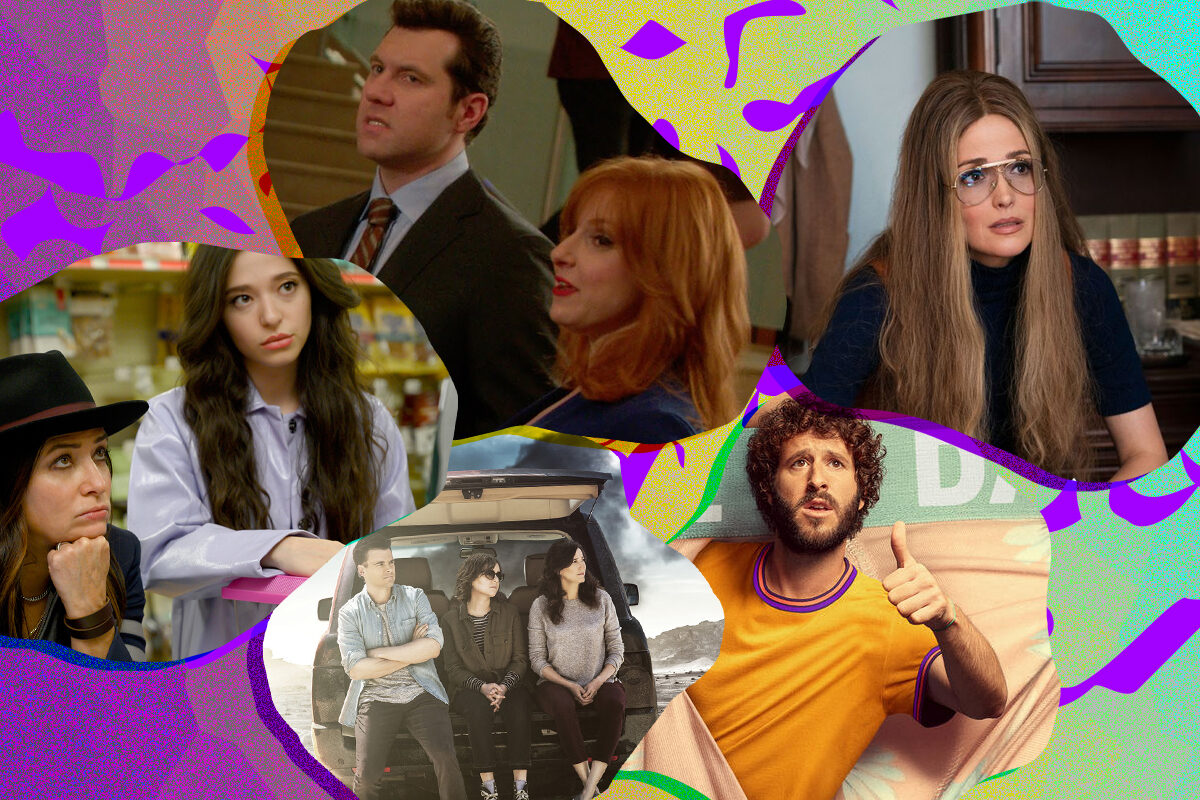 Hulu has been knocking it out of the park lately, with amazing original programming like “The Great,” a gorgeous, highly fictionalized show about Catherine the Great, and so much more amazing programming.

While Netflix used to be my primary go-to for binge-worthy TV, that is no longer the case. Despite its sometimes annoying interface — please, Hulu, I just want easy access to what I’m already watching when I open the Hulu app! — the streaming platform is just chock full of incredible TV and movies — and a lot of them Jewish (or at least, Jew-ish).

So yes, you’ve guessed it, just in time for the weekend, we’ve compiled some of the best Jewish Hulu shows and movies for you to stream.

Why was “Difficult People” canceled?! I honestly don’t think I’ll never get over it. This show features my all-time favorite Jewish comedic duo, Julie Klausner and Billy Eichner, playing two commercially unsuccessful but delightfully confident New York comedians and actors. Their kvetchiness is to live for, and their love for each other is palpable. This is one of my favorite Jewish shows of all time. We need Klausner and Eichner back together on TV, stat.

Yes, Grace Adler of the groundbreaking comedy “Will & Grace” is Jewish and yes,  Debra Messing who plays her is a Jewish mom. Despite the fact that some aspects of this show haven’t exactly aged well, “Will & Grace” is still a groundbreaking queer show, one that brought gay characters into homes in the U.S. for the first time. The 2017 reboot is also pretty fun. Let’s face it, Megan Mullally and Sean Hayes together are absolutely irresistible as Karen and Jack.

If you think we wouldn’t put a show that stars actress, mom, neuroscientist and Jewish holiday maven Mayim Bialik as the owner of a cat cafe on this list, you should think again. This show is delightful and distracting — a great binge for a (literally or metaphorically) rainy day.

Both the original “The Wonder Years” and the reboot can be found on Hulu, and both of them feature a Jewish character in the main cast of kids. In the original “The Wonder Years,” we have Josh Saviano playing Paul Joshua Pfeiffer. The show also stars Jewish actor Fred Savage whose character, Kevin Arnold, is not Jewish. Savage helped produce the 2021 reboot of the show, which takes place in 1960s Montgomery, Alabama, and has a majority Black cast. The first season has a bar mitzvah scene for character Brad Hitman played by Jewish actor Julian Lerner, for whom the bar mitzvah was a stand-in for his canceled COVID bar mitzvah.

There are four seasons available to stream of this super Jewish Canadian show that truly holds up incredibly well despite the fact that it’s over a decade old. “Being Erica” stars Erin Karpluk as Erica Strange, the daughter of a rabbi, a single woman in her late 30s struggling with the fact that her life is absolutely not what she wanted it to be. She meets a therapist by the name of Dr. Tom who allows her to travel back through time to help fix all the things she feels she screwed up with her life. The result? A great meditation on relationships, single life and what it means to be successful in your 30s.

I mean, listen, sometimes you just need a loud nostalgic comedy show to get you through the day. This sitcom takes place in 1980s  Philadelphia and tells a somewhat fictionalized version of Goldberg’s own childhood. It also stars Wendi McLendon-Covey as matriarch Beverly Goldberg, whose sweaters give me life. Jeff Garlin, who plays the father in the show, will not be returning for future seasons after allegations of misconduct.

This show stars Jewish comedians Benji Aflalo and Esther Povitsky (of “Crazy Ex Girlfriend” fame) as two aspiring stand-up comics. It’s cringey, funny and super out there, and has some “Broad City”-esque vibes. Plus, season two has a guest appearance by none other than Fran Drescher!

This new FX/Hulu show stars Jewish rapper Dave Burd, aka Lil Dicky — and if you’re guessing at the origin of the monicker, you are correct (and it’s a subject that comes up a lot). The show that premiered in March 2020 is a total smash. It’s also very, very Jewish, featuring the comedian’s Jewish parents and so many Semitic references including a bar mitzvah. While it is not for the squeamish, it’s a unique, funny and delightfully musical show that deserves all its success.

Pamela Adlon stars as a divorced Jewish mom of three daughters in this wonderfully human and smart show that gets at the pains and the joys of single parenting. Adlon is Jewish IRL and in the show, and the show has borscht and bar mitzvahs and a batceñera (that’s a bat mitzvah/quinceañera mashup). It’s just so, so good. A must-watch, for sure.

Casual is one of the most brilliant shows ever made about sex, relationships and growing up as an already-adult. It stars amazing comedian Michaela Watkins and was created by Zander Lehmann and directed by Jason Reitman — all three very talented members of the tribe. Watkins plays Valerie, a newly divorced mom of a teen who is moving in with her emotionally stunted brother, a dating app creator.

Amy Schumer’s show is a Jewish coming-of age-tale that tells the story of Beth, whose life goes into a tailspin after the sudden loss of her mother. This show, which is both funny and heartbreaking, is very much based on Schumer’s own life, and it often acknowledges her Jewish identity. Plus, I’m obsessed with Jewish comedian Gary Gulman’s Shlomo — a sweet kippah-donning side character that is just the perfect nice Jewish boy.

This Hulu original is an extremely underrated, creative show starring Jewish actress Kat Dennings as Jules Wiley, a woman with a highly developed imagination who reconnects with old friends and discovers the power of friendship after a breakup. It’s a trippy meditation of friendship and relationships that’s both funny, heartwarming, unpredictable and sometimes just plain weird — in the best way. It also stars comedian Esther Povitsky as Izzy Levine, the incredibly quirky Jewish friend of the group. I would watch anything with Povitsky in it, to be honest.

“You’re Samantha Fink, you’re the Russian Jewish tank,” is how this show’s protagonist gets convinced to break her sobriety streak. The show deals with addiction, recovery and rebuilding your life. As Gilliana Hope wrote for Hey Alma, the show captures Jewish 20-somethings in all their messy and complicated glory.

“What We Do In The Shadows”

Is there anything Jewish about the content of this show? Aside from being co-written by our favorite Jewish dad, Taika Waititi, not so much — though it has a host of fabulous Jewish guest stars, like Beanie Feldstein and Nick Kroll. But “What We Do In the Shadows” is an excellent vampire comedy film that was turned into an even more incredible TV comedy. I honestly don’t know how that’s even possible, but it happened! This show is truly one of the most enjoyable, smart and laugh-out-loud funny shows streaming right now and I’d be doing all of you a disservice if I didn’t include it in this list.

Can you believe it’s been three years since Broad City ended its five-season run? We miss Abbi (Jacobson) and Ilana (Glazer), and we especially miss Susie Essman as Ilana’s delightful Jewish mom in this lovely, sexy, empowering stoner comedy that is now a classic.

Is “Brooklyn Nine-Nine” the best police comedy ever made? With the possible exception of the Israeli cop show “HaShoter HaTov,” I’d argue that the binge-worthy sitcom totally is. Starring dreamy Jewish dad Andy Samberg as Jake Peralta, a gifted Jewish detective who is still haunted by the bar mitzvah season of his youth. Trust me when I tell you this is the feel-good comedy we need right now.

This show about a mom pretending to be in her 20s to get a job in the publishing industry is a distracting, colorful binge! It’s also full of Jewish moments as well as a diverse set of Jewish personalities. “It’s refreshing to see such diverse Jewish characters get significant screen time on an otherwise ‘unaffiliated’ show: the Orthodox lesbian, the stereotypical overachieving Jewish med student, the jappy ‘pansexual’ you feel like you know,” writes Haley Longman.

The show about the fight to ratify the ERA (Equal Rights Amendment) is about some seriously amazing Jewish women we all need to remember: Gloria Steinem, Bella Abzug, and Betty Freidan, as well as lawyer and film producer Brenda Feigen. It’s marvelously acted and impeccably made.

“Juda” is an Israeli vampire show that is 100% worth watching. Starring Israeli comedian Tzion Baruch as Juda, a petty criminal turned vampire, it’s the Jewish supernatural show we’ve all been dreaming of.

Five Israelis wake up one morning and find out they’re implicated in a high-profile kidnapping of the Iranian Minister of Defense. They all deny it, but what is truth and what is fiction? That’s the concept behind this Israeli show that will truly keep you at the edge of your seat.