‘Fiddler on the Roof’ Is the Base of My Jewish Identity 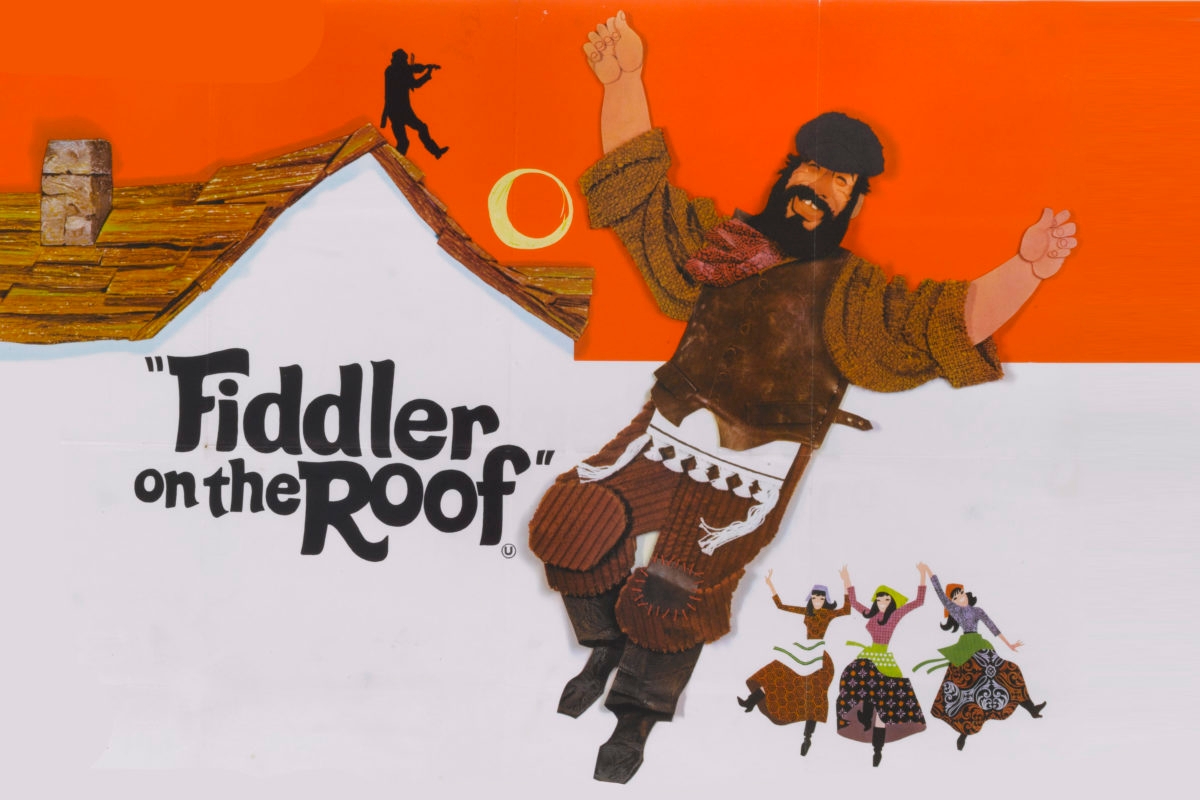 About five years ago, I visited the Stedelijk Museum in Amsterdam, home of iconic modern art pieces and lovingly (or not so lovingly, depending on whom you ask) nicknamed “the bathtub” by locals after its ultra-modern architectural renovation.

Of course, I admired the strict lines of the Mondrians, the geometric figures of the Picassos, and the haunting colors of the Rothkos. But there was one painting that held my attention more than any other: The Fiddler by Marc Chagall. This 1912 painting features a fiddler balancing on one foot on a rooftop, with a small Russian town in the background. The famous painting actually inspired the title of the iconic musical, Fiddler on the Roof, which is itself based on a collection of stories by Sholem Aleichem.

Perhaps my transfixion with this particular painting shouldn’t have been a surprise. After all, Fiddler on the Roof has immeasurably impacted my own sense of Jewishness, ever since I was a kid.

Here’s how it happened: Before age 9, I honestly cannot remember being consciously aware of my Jewishness. I suppose I knew that I was technically Jewish through my maternal grandmother, but she never made it an integral part of her children’s lives. Today, looking back, it’s clear to me why: Her own mother had died in Auschwitz while my grandmother, as a young girl, lived with a non-Jewish family in the Dutch countryside. She loved her adoptive family dearly, and her own Jewish father was a staunch atheist. After World War II, there wasn’t much in the way of a Jewish community in the Netherlands, certainly not in the rural region my grandmother called home.

But then, as a third-grade, not-really Jew in a decidedly-not-Jewish Colorado town, I found myself marveling at Conifer High School’s production of Fiddler on the Roof. My sister was the student director, my brother played baritone in the orchestra, and my mother volunteered to source the props and assist backstage. Suddenly, I was spending all my afternoons watching rehearsals, absorbing this story about a small shtetl come to life.

As the orchestra practiced, the unforgettable score became part of my daily life. This was my first introduction to the unmistakable sound of klezmer music; the dominance of the minor key was a revelation. As Crazy Ex-Girlfriend put it so eloquently: “We sing in a minor key to remember that we suffered.”

Since that production, 17 years ago, the movie soundtrack has become a staple in my family’s life. Growing up, my sister and I would jokingly sing “Matchmaker” at the top of our lungs, effectively repelling any possible match. Singing even just the first few lines of “Miracle of Miracles” would invariably annoy my mom to no end, though I still don’t quite know what it is about that song that irks her so much. Probably my family’s longest-running joke to this day is to shout “Tradition!” in response to any query as to why we do things the way we do. It may sound strange, but listening to and quoting Fiddler was the most Jewish I felt our resolutely secular family could get.

I never attended Hebrew school but, thanks to Fiddler on the Roof, I learned what the Sabbath is and the rules related to its observance. The wedding of Tzeitel and Motel was the first Jewish wedding I ever attended, so to speak. It was the first time I encountered a chuppah, the first time I saw a bride circle her groom seven times, and the first time I heard the groom break a glass with his foot. Years later, at my sister’s wedding, I could not help but hear the melancholy tune of “Sunrise, Sunset” playing in my head while my parents stood by her side.

Shortly after this life-altering high school production of Fiddler on the Roof, my family moved back to the Netherlands, where my parents had grown up and my extended family still lived. Once again, I found myself in one of the least Jewish places imaginable: Ermelo, a town with 27,000 residents, in the middle of the Dutch Bible Belt. The only other Jews I knew were my equally secular aunts, uncles, and cousins. At the time, my identity revolved more around being “the American” rather than “the Jew,” and I did not seek to change that.

A few years later, however, during my high school Religious Studies class, my Jewishness became relevant once more. My fellow students were unfamiliar with Fiddler on the Roof, and Jewish culture in general. I remember receiving many quizzical looks when, for a few weeks, I decided to wear a Star of David necklace as some form of misguided teenage rebellion.

When my teacher found out he had a real-life Jew in the class, I became the new favorite student to whom he could direct all the Jewish questions. “What’s a mezuzah? What is the significance of a bar mitzvah? Why is Israel so important to Judaism?” While this was often uncomfortable — he didn’t quite grasp the difference between being religiously or culturally Jewish — I found myself able to answer a considerable number of his questions thanks to what I had learned from Fiddler. For example, with the help of “Tradition,” I could explain the meaning behind covering one’s head with a kippah.

Fiddler on the Roof also gave me a frame of reference for what my ancestors experienced. They were pushed further and further west from Poland and Germany, until my grandmother’s generation was forced to spread to such far-flung locales as Shanghai and Australia. It made me curious to know more about my own family history. Thankfully, my grandmother’s cousin had researched our family tree, and had even written a memoir, recounting his family’s flight from Berlin just before the start of WWII. Just like Tevye and Golde, his parents had to hope that wherever they were going with their children would be better than the home they left. The ending of Fiddler on the Roof is not just a plot point to me anymore, but the lived history of my family.

My grandmother was similarly instrumental in putting the musical’s themes into perspective. As a teenager, I accompanied her to a memorial service dedicated to the Holocaust victims who were captured at a Jewish hospital in the Netherlands, my great-grandmother among them. The service was not particularly well-attended; so few remained to honor those who had died. My grandmother was amazed at her own relative luck — she had not only survived the war, but she also went on to have five children and 12 grandchildren. She dedicated her life to her family; the family she felt she was never, realistically, supposed to have. This family devotion is what always stands out to me in Fiddler, and it’s what I continue to associate with what it means to be Jewish.

Even now, I’m still not a formal part of any synagogue or Jewish organization, nor have I ever lived anywhere with a sizable Jewish community. Still, I know that if I listen to the Fiddler soundtrack, I feel like I am part of something tangible in the world, something bigger than my own questioning sense of identity. I may not ever really know how Jewish I want to be, or what that would even look like to me, but it makes me feel like I am part of this diaspora of Fiddler-loving, secular Jews around the world.

My husband may not be Jewish, but I know that he will join me in passing on these family stories and the legacy of Fiddler on the Roof to our future Chinese-Canadian-American-Dutch-Jewish children. I can’t think of a better example of modern Jewish life. L’chaim!