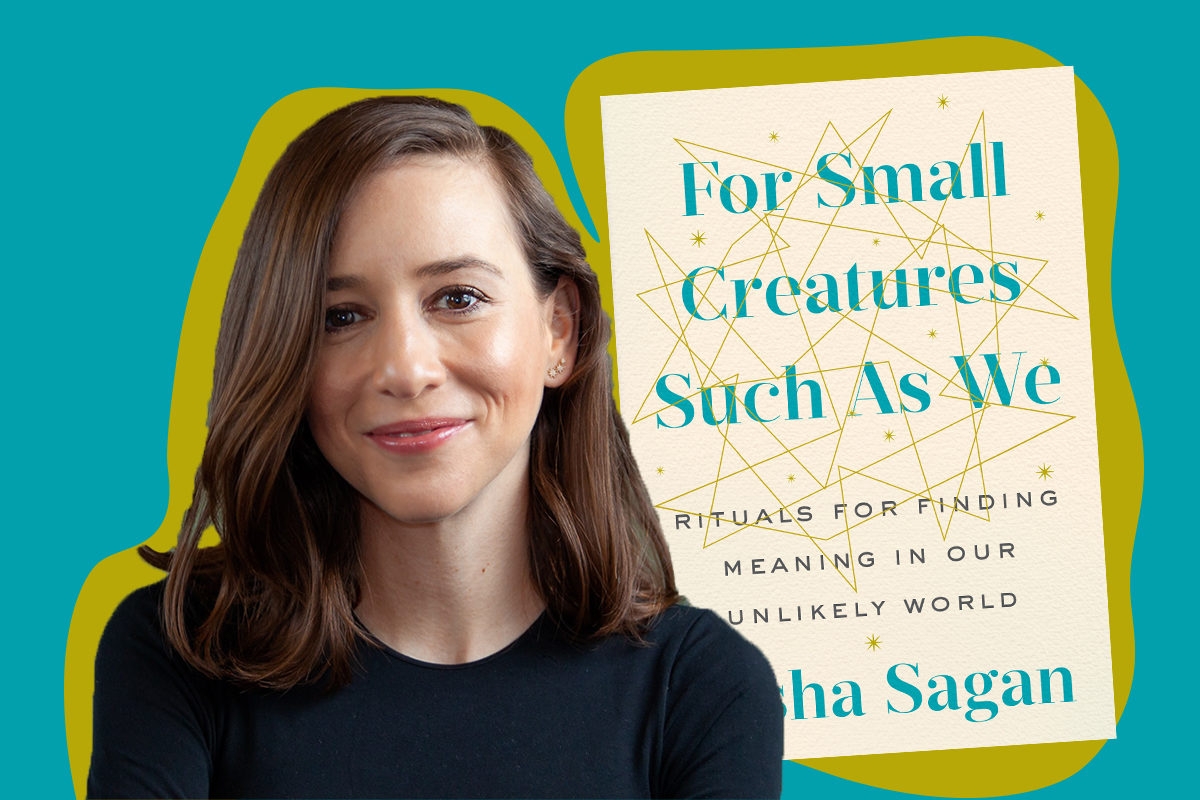 Sasha Sagan grew up in a house where the scientific method was discussed at dinner. But, as she was taught again and again: skepticism does not mean pessimism. We are all capable of finding beauty in our everyday lives, even if we don’t believe in a higher power.

If that sounds like some hefty topics for a first-time author to address, then, well, you haven’t met Sasha Sagan. The 36-year-old Jewish mom is the daughter of famed scientist and astronomer Carl Sagan, who died when she was only 14. Her recently published book, For Small Creatures Such as We: Rituals for Finding Meaning in Our Unlikely World is part memoir, part guide to rituals around the world, and part ode to her parents and how they raised her.

More than anything, however, the book is a product of being a first-time mom, and it reflects Sasha’s desire to map out a world filled with meaning for her daughter. “For years, people told me that once I had children I would become more religious.” she writes. “I would usually get a little defensive. But they were partially right. I do now have an increased urge to celebrate things with our daughter… I want to create moments that make us feel united with other Earthlings, without the dogma that divides us.”

MY BOOK IS OUT! It’s about science & rituals. Also falling in love,holidays, my parents, birth, death, religion, being secular & all the stunning grandeur of reality that requires no faith. And sex & the encyclopedia too. So if you like any of those things you may be interested. pic.twitter.com/kjeLyGdEwT

The inspiration for the book, she tells Kveller over email, is “that the provable, scientific things are thrilling and majestic and beautiful. And in this brief moment we get on this little world in the ocean of the universe, we are so lucky to have one another. That is what makes it so sacred.”

She continues, “That was the ethos I was raised with, and it’s perfectly reflected in this quote from the novel Contact, the only work of fiction my dad ever published: For small creatures such as we the vastness is bearable only through love. That’s where the title came from. My parents collaborated on everything, and it was actually my mother who came up with those words.” Sasha Sagan and her parents, Carl Sagan and Ann Druyan

Her parents — her mother is Ann Druyan, an Emmy-award winning producer and writer —  loom large throughout the book, as does their parenting ethos. “My parents were so thrilled any time I asked a question to which they didn’t know the answer. Opening up the Encyclopedia Britannica was like a holy ritual for us,” Sasha says. “That is so him to me. Learning something new and rejoicing in a deeper understanding.”

Sasha is encouraging her daughter, who is now 2, to do the same. “My mother has always said, ‘Don’t lie to your children.’ I think that’s very good advice. And I think it’s connected to the idea of looking stuff up when you don’t know. My parents never said, ‘That’s just how it is’ or ‘Because I said so,’ but they did say, ‘That’s a good question, I don’t know’ sometimes. That sounds so minor but it made a huge impact on me.” 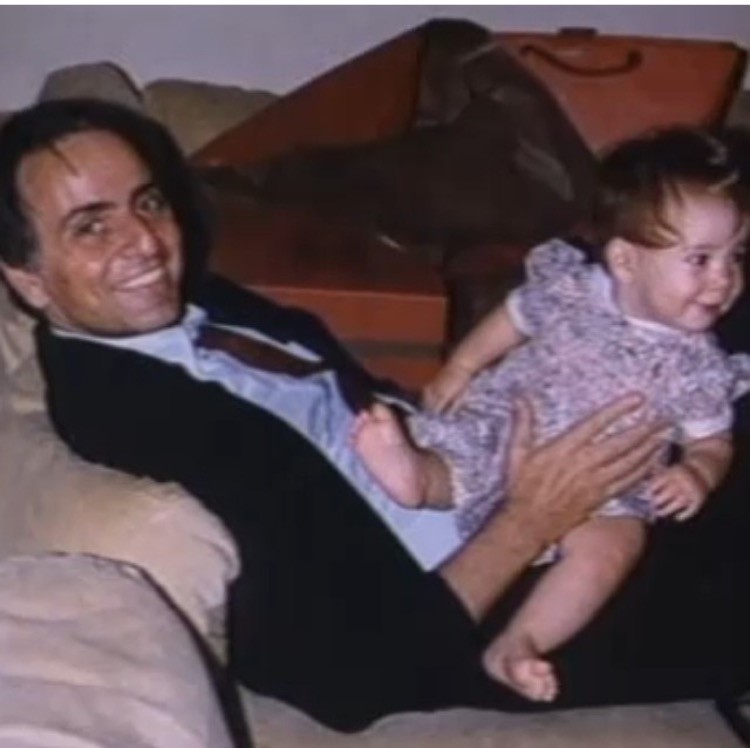 Sasha and her father, Carl Sagan

Much of For Small Creatures Such as We dives into Sasha’s identity as a secular Jew. Even though she identifies as secular, she participates in many Jewish rituals — from lighting the Hanukkah candles to getting married under a chuppah to fasting on Yom Kippur.

“What I love about Judaism is the way it makes me feel connected to my ancestors,” she says. “Beyond a few generations back, I know virtually nothing about who I came from, except that I know they were Jews. Even though I don’t share their theology (although, who knows, some of them could have been skeptics too!), carrying on some of their traditions, even in my secular way, makes me feel viscerally that I am linked in a long chain.”

Particularly, Sasha writes about the power of Jewish mourning rituals. She talks about placing a stone on gravestones of her family members, and lighting a yahrzeit candle for her father every year. “There is something so reassuring about having a framework when you’re grief-stricken. And for me, an ancient one, one you know you ancestors also relied on, feels even more reassuring,” she tells Kveller. 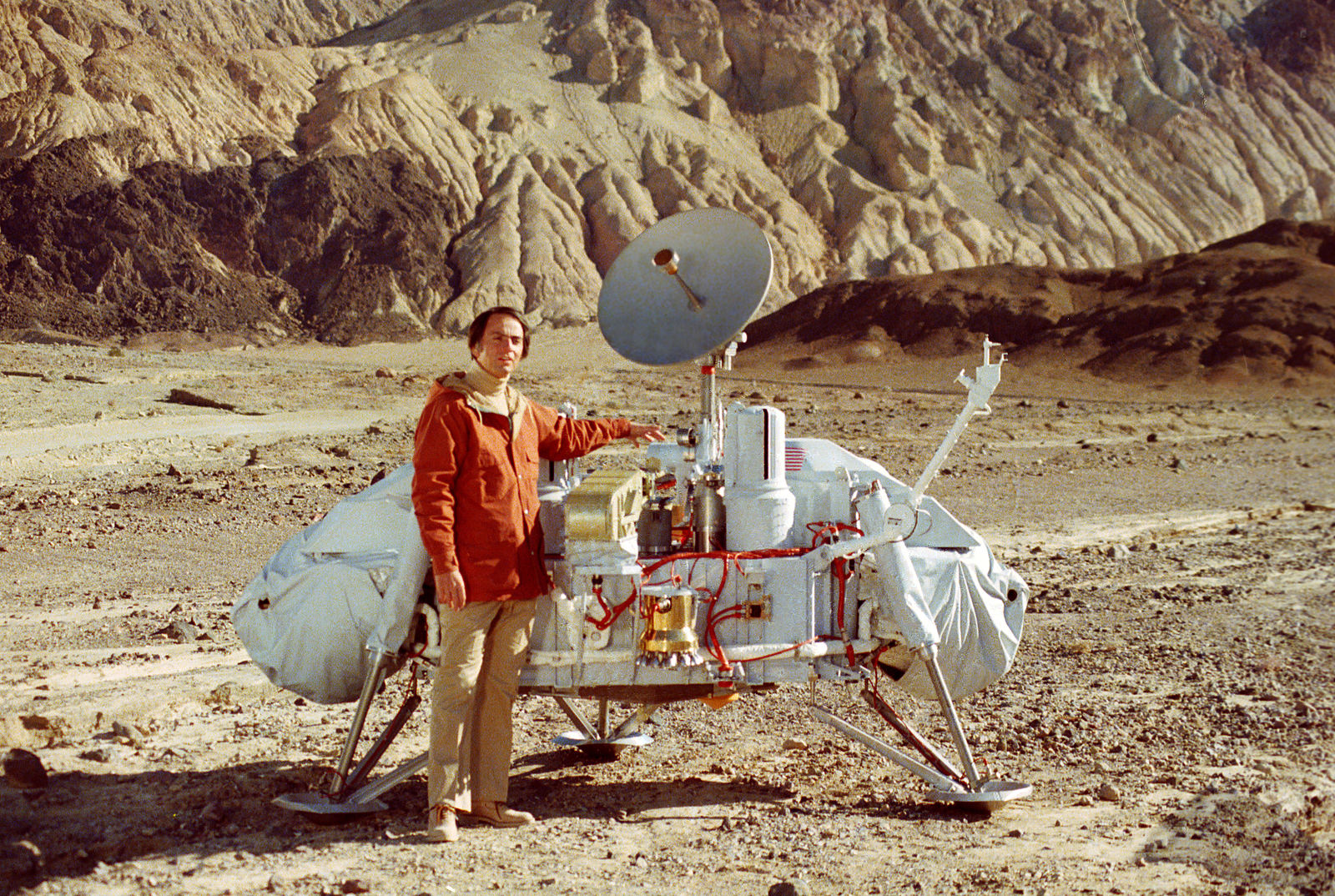 Carl Sagan with a model of the Viking lander (NASA)

And yet, For Small Creatures Such As We doesn’t hone in on Jewish rituals and identity; it examines rituals that take place around the world, from the ancient times to the present day.

One of her favorite rituals she learned about during her research, she says, was land diving. “In Vanuatu, in the South Pacific, men have a kind of bungee jumping custom where they tie vines to their ankles and jump off a high platform,” she says. “Doing this for the first time as an adolescent is part of their coming-of-age ritual. When you complete your first jump, your community celebrates you and your mother destroys a favorite childhood object. What could be a more perfect performance of what it’s like become an adult? That leap into the unknown, that destruction of the things that once gave you the illusion of security.”

She continues: “It really struck me that all over the world and throughout time, we perform these rituals to deal with change. The hora is a perfect example. It’s physical incarnation of the metaphor of a wedding: your community encircles you and your beloved, lifts you up in a dizzying frenzy. It’s perfect.”

“But of course I didn’t have to research that one,” she adds.

Reading Sasha’s book is a reminder to appreciate magnificence of our lives and simply the fact that we exist. There’s so much that feels so terrible — climate change, rising anti-Semitism, wars, and faltering democracies — that it can be hard to feel hopeful. Yet, when I finished For Small Creatures Such As We, I some optimism stirring somewhere deep inside me.

How does Sasha focus on living in the now, and not worry? Well, for starters, she does worry: “I think worrying about the future generations is totally justified and important and right,” she says. “And in one way or another, it’s probably among our oldest traditions.”

Still, that is not the be-all, end-all. “I think the key is to act in some way or do something you feel helps move the world closer to how you wish it to be,” she says. “Don’t give in to the hopelessness. And, when you can, find the beauty and joy in the present. No matter what happens next, we are here right now and there is some profound magnificence in that alone.”

Image of Sasha Sagan in header by Brian C. Seitz.