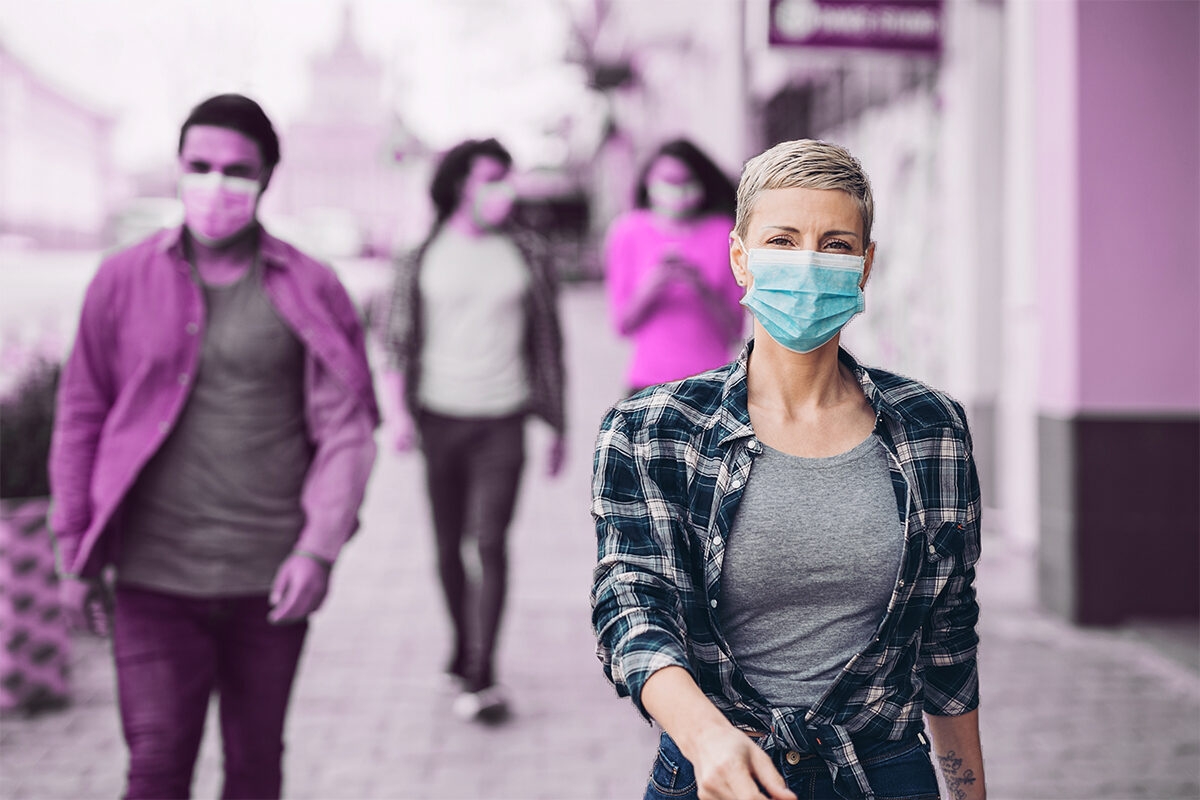 It really feels like Groundhog Day around here — it truly seems as if I’m living the same day over and over again. I have to look at my phone more often than I’d like to admit just to remember the date, or even the day of the week.

So, last week, after another long day of being holed up in my two-bedroom New York City apartment with my two kids and husband during this COVID-19 pandemic, I decided to take a walk.

Actually, I take that back: I didn’t make that decision at all. My husband insisted that I leave the apartment. He could see I was exhausted and desperately needed a break after homeschooling a kindergartener and second grader all day, wracking my brain to come up with meals and snacks practically every hour with whatever random ingredients we have on hand, and trying to maintain a clear path to navigate each room amidst the clutter of toys, art supplies, and crumbs.

Still, I immediately thought a walk was a great idea and exactly what I needed. Fresh air, a change of scenery, and a little exercise sans the screaming kids.

The last time I had ventured out was with my 6-year-old, and it was so stressful that I’m dreading doing it again. Getting her to maintain a “social distance” from anyone was nearly impossible. Her little body wasn’t trained for understanding personal space, let alone how to stay six feet away from anyone.

She didn’t want to hold my hand and keep her other hand in her pocket, as we had practiced at home. She needed to move — she wanted to twirl and zigzag back and forth across the sidewalk. She wanted to run to the nearest curb to practice her balance beam tricks and hop over all the cracks.

If that wasn’t exhausting and stressful enough, getting back to our apartment pushed me over the edge. As we walked into the lobby, she ran to say hi to the doorman; she even rested her cheek on the front desk for a minute to get his attention. I reminded her to simply wave and not give the high-fives she was used to. Then we raced to the elevator, and she pushed the button. She pushed the button! After I told her so many times that she wasn’t allowed to do that right now. She forgot. She’s 6. This makes no sense to her.

Since then, I was notified of more than one confirmed case of COVID-19 in my apartment building. I know living in a less densely populated area has its own challenges during these unprecedented times, but when you share streets with literally millions of people, and your home has so many shared spaces, it is nearly impossible to fully isolate yourself.

So, taking this well-deserved break was going to take a little more planning than I was used to. Was “right now” one of those off-peak times when fewer people might be outside? Were any of my neighbors in the hallway? I needed to listen before opening the door. How many drops of hand sanitizer did I have left in my travel-size bottle, and would it be enough if I actually needed to use it? Should I take the elevator or the stairs? If I take the elevator, I have to push two buttons; if I take the stairs I have to touch three door knobs. Neither situation is ideal.

I went with the elevator but it took twice as long as usual because now we have to wait for elevators to be empty before stepping in. I had to let two occupied elevators pass before it was my turn to go.

When I finally set foot outside, I felt like I was stepping onto a movie set. Everything looked real but fake at the same time. It was cloudy and the air was damp. The stores across the street were completely dark. There were actually parking spaces available in front of my building, something I almost never see.

People were riding bikes and scooters in the middle of the street (which is usually a busy two-way, four-lane avenue). Then there were joggers, people just walking, and delivery workers dropping off packages. I waited for a break in the foot traffic, and then jumped in and began my walk around the block.

On a typical day, fresh air, exercise, and a break from my kids would make me feel better. But as we all know, there is no such thing as a “typical day” at the moment. So I guess it shouldn’t have surprised me as much as it did that my walk to reset and recharge had an atypical effect. The opposite effect, to be exact: I felt more isolated outside than I did inside my apartment, and, on top of that, my level of anxiety also increased.

We didn’t need medicine or groceries and I didn’t know exactly where to go. So, I just looked for the streets with the fewest pedestrians on them and did the social-distancing shuffle with everyone else.

The shuffle kind of felt like Frogger, that old-school video game where you try to get your frog safely across the street or river by dodging moving objects and vehicles in your path. But I wasn’t dodging pixelated logs or cars or trucks. I was moving out of the way of real people.

It was jarring to see many of them wearing blue medical gloves or face masks, but that wasn’t the weirdest part. The thing that threw me off the most was that no one looked at each other or even acknowledged one another’s presence. In our effort to keep our social distance, somehow “no eye contact” has become part of the routine.

In the past, I would have exchanged an empathetic look with a mom trying to peel her toddler off the sidewalk and convince him to walk just one more block, or said hello to a person walking a dog, or smiled at an older person who was out enjoying the day. I wouldn’t have thought twice if a person out for a run coughed as she jogged by me. But things are different now.

We’re all watching where we’re walking, trying hard not to get too close, not knowing if that stranger on the street has the coronavirus. When we see someone ahead, we move to the side, step into the street to make more space, or even cross to the other side of the street if we have to. When we finally get close enough to “see” each other, most people who may have nodded or smiled just a few weeks ago, now look down, pretending like the other person isn’t there.

Being out in a world where people no longer seem to share those non-verbal signs made me feel very lonely. The effort and energy I was using to avoid getting too close to person after person and awkwardly looking down at the sidewalk each time not knowing where to look was quickly getting exhausting. So, after about 20 minutes, I decided to cut my walk short and head home.

As I turned the corner onto my street, I saw my neighbor waiting in front of my building on the other side of the street, trying to catch a cab.

He lives across the hallway. Normally, I chat with him briefly in the evenings when I’m taking out the last bag of trash for the day and he’s waiting by the elevator to take his dog for a walk. I haven’t “seen” him in weeks. But from the distance, I took a chance that he could actually see me and I waved. He waved back and smiled — from a safe distance of at least 50 feet. He happens to be a physician. And without even knowing it, he gave me some of the medicine I really needed: a dose of human interaction that was not on a computer screen.