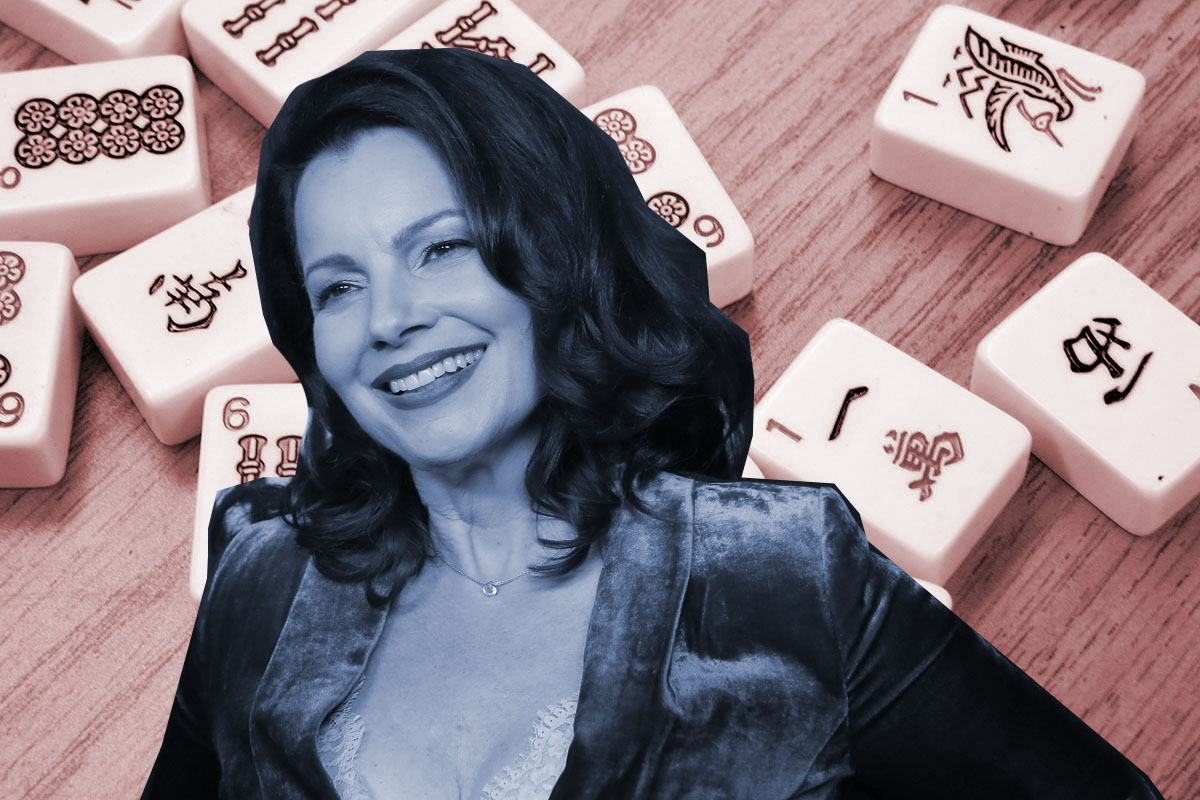 Fran Drescher has a new pandemic hobby and it is oh-so-fitting. “The Nanny” star and Jewish fashion icon has recently taken up what is arguably the most Jew-ish pastime of all: mah jongg.

Though she’s a new player, Drescher, 63, and mahj actually go way back. Not only is Drescher’s mom, Sylvia, a lover of the game — Drescher fondly recalls watching her play — but, according to some mah jongg aficionados, “The Nanny” actually helped the game gain renewed popularity back in the 1990s.

“Fran mentions mah jongg four, maybe five times a season on the show, and it really helps,” Roberta Last, a mah jongg tournament host, told the Las Vegas Sun back in 1996. “Shows like that have helped revive the game. We are seeing more and more young people and men get involved.”

It was Fran’s friend of 40-plus years, Michele Katz, who finally got her to play the beloved tile game. Katz had been trying to get Drescher to play for years and finally succeeded this year. She decided to put a group of close friends together to help Drescher learn the game. Drescher, in turn, invited another close friend, a recent LA transplant and game-night lover to join the group: Rosie O’Donnell.

(As it happens, Drescher and O’Donnell also go way back! In the ’90s, Drescher’s parents had a regular segment as restaurant critics on O’Donnell’s show and, apparently in the spirit of being everyone’s Jewish parents, they consider the media personality and actress a surrogate daughter.)

After one of those game nights in June, Drescher uploaded a video of the duo doing a little mah jongg victory dance to her Instagram. In the joyous, short clip, you can see Drescher and O’Donnell, both wearing hoodies, yell, “Mah jonng!!!” The duo then break out into a wonderful little dance — Drescher really knows how to churn the butter! — chanting, “We won mah jongg! We won mah jonng!”

You can definitely tell that this group of friends are genuinely having a wonderful time. Honestly, this video is making us want to play, too!

Drescher’s followers lapped it up, and the video went semi-viral, garnering almost 150,000 views to date — which is remarkable but, honestly, this video deserves at least a million views! It’s just so wonderful.

Two of the viewers were Donna Kassman and Dara Collins, the founders of Modern Mahjong — a web site and community that sells Mahjong Dice and other accessories, as well as organizes tournaments both local and virtual. These ladies don’t only share a love of mahj with Drescher, they also share a passion for tzedakah — charitable giving. They give a percentage of their tournaments to a different charity each month and have a special dice set that raises money for Alzheimer’s research. Meanwhile Drescher, who survived uterine cancer in 2000, founded Cancer Schmancer, a charitable organization dedicated to saving lives through prevention, early detection of cancer and policy changes.

Kassman and Collins reached out to Drescher on social media and the trio decided to collaborate on a joint project to mix mahjong and mitzvah.

In honor of Gynecologic Cancer Awareness Month as well as Drescher’s birthday (Sep. 30), the three decided to use her newfound passion for the game to raise money for Cancer Schmancer. The actress (and newly minted SAG-AFTRA president!) is urging players to participate in a hybrid mah jongg tournament that will take place between Sep. 20 and 26. Registration is $25 for each participant, with part of the proceeds will go to Cancer Schmancer. Players can play online or in person — for more information you can click here.

As for Drescher’s personal mah jongg journey, well, it’s had its highs and lows. A week after the style icon posted her first mahj video, she and her partner lost at game night. Drescher posted a follow-up video that documents their disappointment. “We were robbed,” O’Donnell says jokingly. Drescher concedes that “it was more fun last week.”

Still, even in her losses, Drescher is a consummate delight. Keep those mah jongg videos coming, Fran!