How Jewish Celebrities Celebrated Passover During a Pandemic 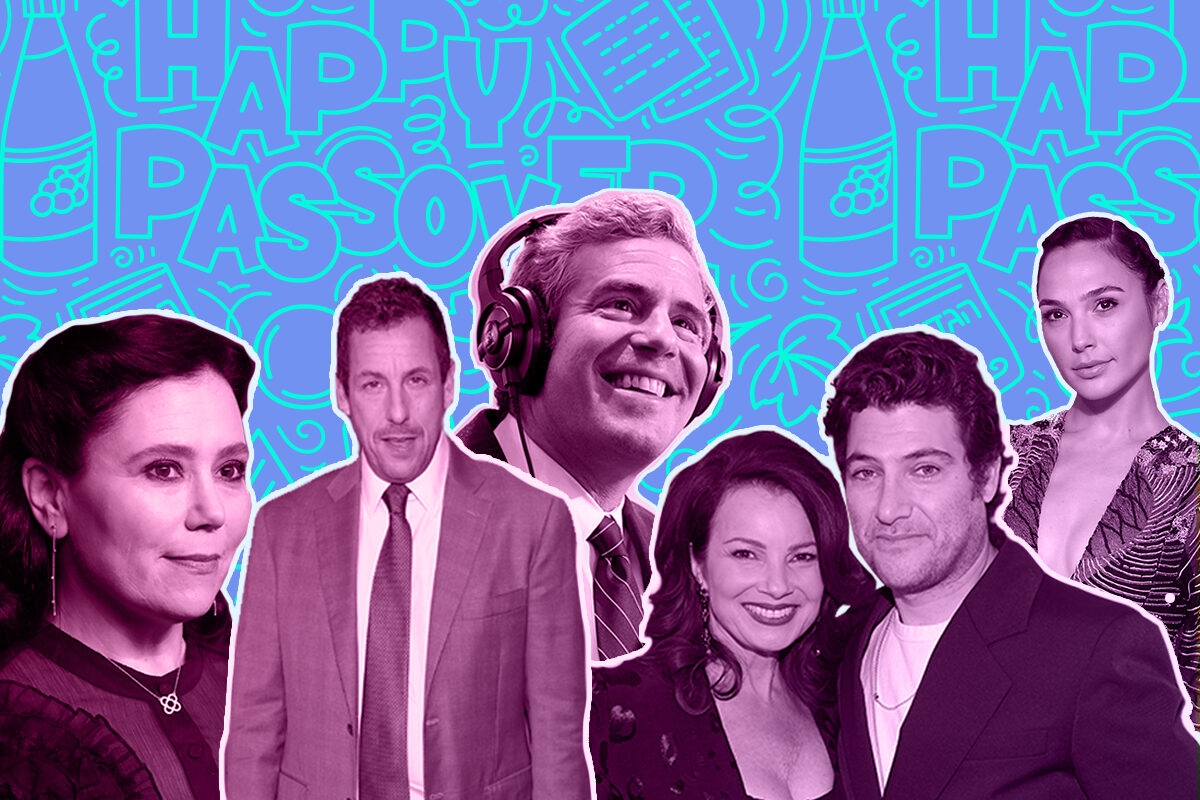 It was so truly comforting to see that these stars of David, like us regular folk, had seder struggles of their own, from Zoom issues to challenges in sourcing seder plate items. Truly, Jews across the globe were united in our seder scrappiness and our willingness to make it work! While these circumstances are undoubtedly challenging, we love to see it. Happy Passover!

New mom Rachel Bloom shared how her husband, Dan Gregor, put together a last-minute Seder for their family. Impressive!

As I’ve been occupied with a very hungry little human who needs me topless and immobile at all times, Gregor single-handedly put together this Seder for us yesterday. (Not pictured: matzoh ball soup and a Hungarian chicken dish. Pictured: naked lady glass.)

Comedian Nick Kroll shared a clip from Big Mouth, his animated Netflix comedy about puberty. In season three, they expertly dive into the Passover story at a seder set at a Florida retirement home.

The only 100% historically accurate telling of the Passover story…

Kroll also appeared in “Saturday Night Seder,” where he attempted and failed to sing the Four Questions, which he called his favorite part about being Jewish (aside from owning the banks and the media, he joked).

The Marvelous Mrs. Maisel star and Jewish mom-of-two Alex Borstein shared some scenes from her seder.

“Being on full lockdown we couldn’t quite get everything we needed for our seder plate. I had an egg and apples, but the kids made the rest from felt and feathers. Dayenu,” she wrote.

No novel plague is gonna keep us from tellin’ tales about some old-ass plagues. You cannot break us, covid. . . Being on full lockdown we couldn’t quite get everything we needed for our seder plate. I had an egg and apples, but the kids made the rest from felt and feathers. Dayenu. . . #TheVidCantBreakTheYid #passover2020 #theEleventhPlague #quaratinepassover

Borstein also reminded us that the best topping for matzah is Nutella:

This Passover I wiped @nutella on the doorway. . . I also spread it over various parts of my body, but that has nothing to do with Passover. . . #GetPassedOver #passover2020 🍫 #dayenu

So this looks really janky cause my matza came all broken in the box, but it’s my mom’s matza lasagna recipe and it’s so delicious! #happypassover #whatnatcooks Recipe: 1. Preheat oven to 350F. 2. Sauté half an onion, chopped, and one garlic clove, chopped in oil and salt; (I used avocado oil). 3. When onion is translucent, add chopped veggies; (I had a bit of broccolini, zucchini and carrots, but you can use whatever you have)—cook until veggies are tender but still have some crunch. 4. In another pan heat ready made tomato sauce or make a quick one with sautéed garlic, olive oil and canned whole peeled tomatoes and salt. 5. Grate vegan cheese. 6. Dip matza in water until it gets a bit soft (about 30 seconds – 1 minute). 7. In a square baking pan layer tomato sauce, softened matza, sautéed veggies, vegan cheese, then layer again, until the top layer of matza and just add cheese on top. 8. Bake for 15-20 minutes, until the cheese is melted.

And, the Jewish actress posted a poem by famed Israeli poet Yehuda Amichai “to soothe us on this seder eve.”

Some Amichai to soothe us on this Seder eve. Chag sameach to all who celebrate! And in honor of the Passover story — of passing into freedom, I’m donating to @anewwayoflifela: supporting women newly freed from incarceration.

Scrubs star Zach Braff tweeted how Elijah will be his only seder guest.

Happy Passover to all who celebrate. This year Elijah is our only Seder guest.

Is this what every family went through this week? Patience is a virtue! This lasted 40 minutes!

Like many Jewish families around the globe, Jessica Mulroney celebrated a virtual family seder.

Virtual family Seder. Happy Passover to all of you. Sending love to all the families that are apart. ❤️

Nanny star Fran Drescher posted a Passover message to her Twitter. “Our prayers are for you during this challenging time,” Drescher said.

Wishing you and your family peace and good health this Passover. https://t.co/rC2jNRYe91 #passover #pesach #seder pic.twitter.com/uklijmLkeS

Actress Emmy Rossum shared her makeshift seder plate, which included some home-made matzah! The actress, who does not eat gluten, spent the days before Passover agonizing about not being able to get the traditional unleavened bread, and we have to say, we’re pretty impressed with her homemade creation!

Passover 2020. I did my best. I’m missing the bone and that’s parsnips instead of horseradish. 🤦‍♀️ pic.twitter.com/jxc5XKUJLo

I regret to inform you that my improvised Seder plate contains a tofu hot dog instead of a shank bone, sauerkraut instead of horseradish, majorly improvised charoset, and a shaved potato masquerading as an egg. Scroll if you want to see my vegan matzo balls 🤪 and shockingly good seitan brisket, via @myjewishlearningcom. A Zissen Pesach to those who celebrate and health, happiness, safety and sanity to all! ❤️

She also shared a selfie with matzah:

… As did her long-time collaborator, Billy Eichner, saying he has “everything” he needs.

Don’t worry about me, I have everything I need.

It's a really special time of year. Passover is a Jewish holiday with important themes of resilience and faith. It resonates with us now especially during these tough times we're facing. To all of you celebrating Passover and Easter I wish you a happy and safe holiday and to remember: tough times don't last, tough people do. . These pictures are from our Quarantined Seder, an important Passover tradition. . פסח שמח

Jessica Seinfeld shared a snap of her family’s seder table, writing “may the 11th plague pass the world over next year.” Note the inclusion of an orange on the plate!! Go, Seinfeld fam.

Happy Passover, Sweet Souls. May the 11th plague pass the world over next year. Good health and peace to all.

She also posted a picture of herself on her Instagram stories looking for hametz with a candle.

Adam Pally shared a delightful Passover song that is one of his family’s traditions. It will put a smile on your face:

Happy Happy Passover as originally written by @charleskopelman and my aunt beth’s friend Jeff I believe? Anyway this song always makes me feel better and I thought every virtual sedar could use a tune to sing with each other.

And of his Passover seder table:

Happy Passover! Love to all!

(Why not share a still from the Uncut Gems Passover scene, Adam??)

The Jewish comedian shared her matzah brei, a “Jewish delicacy.”

Chella Man, a Jewish artist, activist, and actor, shared his run to the grocery store for Passover essentials. They also provided us with their mother’s charoset recipe which is just honey, grated honey crisp apples, and cinnamon.

Kisses in 2020 🖤 Keeping our spirits and love strong during this time! Grocery trips have become the highlight of our week… Don’t worry, we were only out for a moment to grab ingredients for our charoset, vegan brisket, and matzo ball soup tonight’s seder! Happy Passover to my fellow Jews out there! chag sameach! ✡︎

Actress and writer Jenny Slate wrote in The New York Review of Books about her Passover plans.

I wrote a little piece for this. It was a pleasure to do so! Thanks ⁦@nybooks⁩! 🌿🌿🌿 https://t.co/uTStBaRyhB

Slate wrote, “I used to celebrate Passover with the traditional two seders, and the keeping of Passover itself. I don’t anymore, but there is one thing I will do for the holiday: stand in my doorway and open the door to the Prophet Elijah, because I believe that that moment is real, and I’m glad it is striding toward me, even now.”

The Jewish mom celebrated Passover with some leftover matzah from last year. She shot a video of herself eating some of it with maror and haroset on her Instagram stories. “Happy Passover to everyone celebrating this year like us… I’m just sending love to everyone and wishing everyone has a peaceful, peaceful next 24 hours.” So sweet.

Since Beanie Feldstein was the youngest one in her seder, her mother, Sharon, reportedly had to hide the afikoman from her. She also had to read the Four Questions. Honestly, we wish we could have been there! Beanie also posted this great meme about Passover. We relate.

Bat mitzvah girl Tiffany Haddish tried to make matzah for the first time! Unfortunately, her first attempt left something to be desired. We hope her second attempt was more successful!

The Jewish NFL player from the Kansas City Chiefs made his own matzah ball soup, from scratch! We are so impressed.

The Jewish actress posted a picture of her seder table. Lovely.

Happy Pesach to my global family!

To end, a beautiful note from Seinfeld star Jason Alexander: “next year, together.”

To my Jewish brothers and sisters – we often end our seder saying “next year in Jerusalem”. Tonight I’ll say, “next year, together”. Happy Pesach. Please celebrate safely. God bless you. And on the upside, I’m a shoo-in to find the affikomen. Cuz I’m also hiding it. Be well.