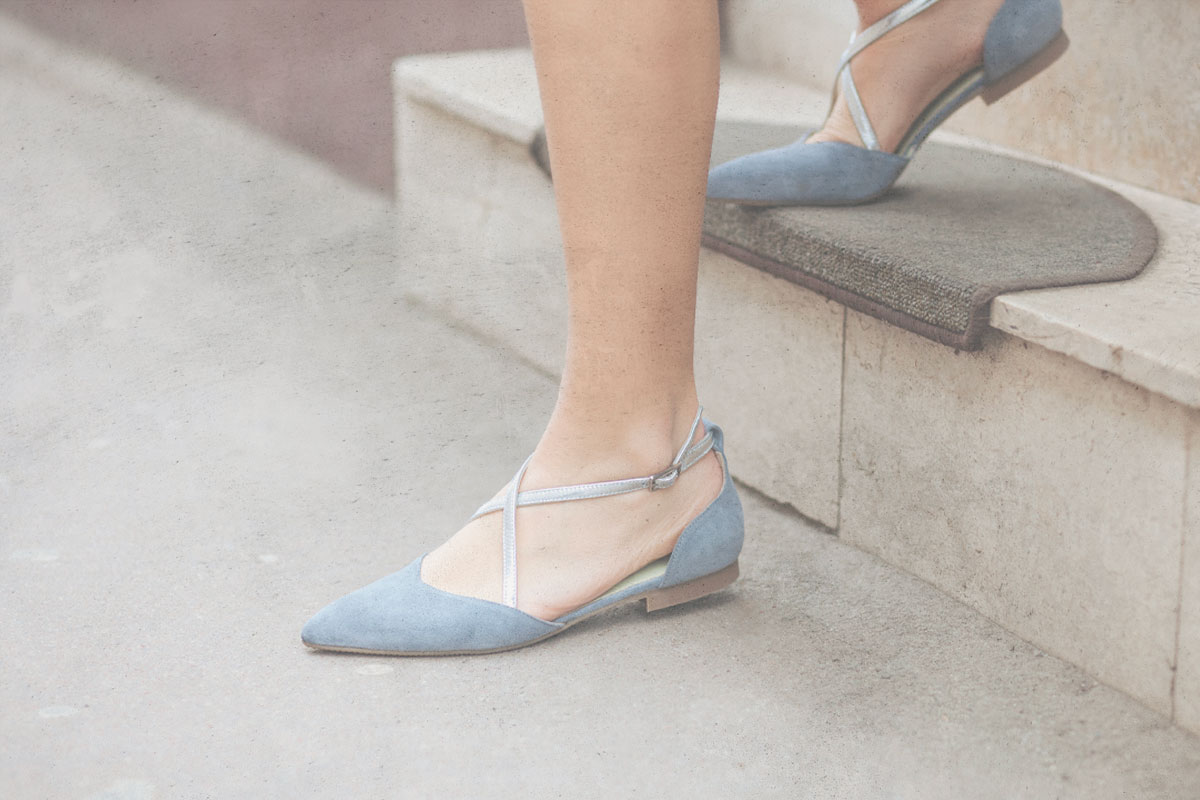 I grew up in Longmeadow, Massachusetts, a lovely New England town famous for being ranked as one of the preppiest suburbs in America, according to “The Official Preppy Handbook.”

There were some Jews, mostly Reform, but my family stood out given that we were religious-ish. “Coverservadox,” as people said back then. We had Shabbat dinner, we kept two sets of dishes (three, if you include Passover). We rescued a dog named Shep, but because it sounded so aggressively German, we renamed him “Shlep.” We weren’t pious people, and I certainly was no saint, but we were heimish.

Every Saturday morning, my family and I would walk to synagogue — a two-mile hike up the main road in town. Inevitably, one of my friends would always drive by in their Jeep Cherokee or Saab, blasting Pearl Jam or Janis Joplin, beeping exuberantly while waving from their brown leather seats that reeked of last night’s cigarettes and beer (drank and smoked, in part, by me).

In my long-sleeved dress and vintage Chanel flats, both of which I’d stolen from a Northampton thrift shop, I’d blow kisses or affectionately give them the finger, and we’d all go our merry ways.

Then my sister and I would sit on the women’s side at shul for hours, bored out of our minds but very well-behaved. I didn’t love going, but I didn’t hate it either. Those Saturday mornings at temple — a ritual my mother insisted on from childbirth until college — taught me the most valuable life skills, things I still rely on today: I know how to pray. I have nice posture. I am extremely disciplined when I need to be. I have strong, unwavering, rock-solid faith.

After services, we’d walk back home, have lunch, and then I’d call my friends to see where everyone was. I didn’t have to wait until sunset. My mother didn’t blink an eye when we’d run off post-dessert (pareve babka or homemade rugelach) and go see our crazy friends who were usually chasing guys, mixing drinks, smoking pot or preparing for our favorite nightly activity: trudging deep into the woods with grand plans to flirt or, in my case, flash the boys my big bodacious ta-tas and sometimes even give out “motor boats.” Shavuah tov!

From a very young age, I knew that it was OK to live with religious contradictions. My observance could be relaxed. I could strictly say no to my friends’ ham sandwiches because I was a proud kosher jew, and an hour later, get loose with a guy named Christian McChristian and feel no inner conflict about either one.

The joint program meant I lived in Jewish housing and studied topics like Talmud and Yiddish. The program was rigorous and intellectual, and though the JTS crowd was spirited, smart and fun in many ways, it was not Longmeadow. The kids in my dorm delighted in learning about Torah and halacha, Jewish law; some were future rabbis who I’ve come to greatly admire. Hanging out at night, some of them would belt out Hebrew songs while others compared schnitzel recipes. They all dated and fell in love at Jewish day school or USY. None of them were… I guess the term we’d use now is “slut-positive,” like me. They were really good kids, but they were all kind of the same (in my eyes, at least), and I had no interest in conforming. I missed my naughty Massholes, now at Villanova or Boston College, who liked to steal, hook up and make hilariously inappropriate jokes. Feeling more rebellious than ever before, I felt utterly suffocated by Jewish life, and I dreaded the next four years.

Though I made it through the joint program with two degrees — in sociology and modern Jewish studies — it wasn’t always pretty. JTS is unquestionably a force of goodness and positivity in the world and many of the staff and students are rockstars — it was me, not them — but those formative years weren’t my favorite. And I resented my Jewishness for all of it. So the minute I graduated, I ran as far away from it as possible.

I got a copywriting job at a downtown advertising agency owned by bonafide WASPs and went back to my Longmeadow-like comfort zone: dirty martinis, dirty jokes, no David Broza, and — baruch hashem — not a lick of schnitzel. While I did have a Jewish boyfriend, I cheated on him constantly with non-Jewish men. It was as if our relationship was a metaphor for my Jewishness; I still subscribed to it, but I got off on abusing it.

Anything involving synagogue or holidays, I participated in simply out of respect for my parents, who had followed me from Longmeadow to the Upper West Side. I’d leave the Passover seder and get a slice of pepperoni pizza just because I could. I’d go to synagogue, but sneak into the bathroom and text with some guy about what I wanted to do to him later that night.

At one point, I fell so madly in love with a Greek Orthodox man that I actually tried to convert to his religion so that his parents would accept me. I can’t pretend that the thought of “officially” abandoning my Jewishness didn’t hurt like hell, but I was willing to walk away from everything for him. I told myself that I’d always have my neshama, my Jewish soul, and no one could take that away from me, so if there was a cross above my bed, so be it.

That relationship didn’t last either.

Everything changed in 2015, when I decided to become a single mom by choice at 38 years old. Though I loved men (possibly too much), I hadn’t found the right person to start a family with, but I was ready. With the abundant support of my family, I started looking for an anonymous sperm donor.

My fertility doctor at NYU advised against choosing a Jewish donor because of genetic risks — and I didn’t feel too strongly about it one way or another — so I started looking at non-Jewish donors exclusively. That’s when I felt a certain unexpected pang in my heart. I needed to be assured that my child would be Jewish, no matter who the sperm donor was. Sure, I’d heard the whole “if the mother’s Jewish, the child is Jewish!” thing forever, but at that moment, given the unusual circumstances, I needed to know for sure.

That’s when I started talking to a rabbi and his wife at my local Chabad.

Without any judgment, without any suggestion that I abandon ship and find a nice Jewish boy, without anything but love and cheer, they promised me that my baby would be Jewish. They gave me permission to choose a sperm donor that felt right to me, no matter what his background was. I was profoundly thankful for not only this validation, but for the way it somehow, organically, shifted me back in touch with my Jewish heart. Suddenly everything clicked. I felt like I could be Jewish on my own terms again, as nuanced and unique as those terms were.

And clearly, I chose the perfect donor, because six years ago, I gave birth to the perfect daughter. Her English name is Hazel, but her Hebrew name is Yael Devorah, and I call her that all the time. As a single mom, I started strolling Hazel to synagogue on Shabbat right away. We’d go to Chabad for Purim carnivals and Sukkah parties and big Shabbat dinners with other interesting, and often offbeat, Brooklynites. We kissed our mezuzah every day, and said our Shema every night, and my soul felt happier than ever.

And then I started dating someone wonderful named Sam, a guy who reminded me of home, of Longmeadow, in all the best ways. But that also meant he was not Jewish. So on our first date, with my 7-month-old daughter at home with my parents, I was as straightforward as possible with him: “I’m very Jewish, and I’m raising my daughter very Jewish, and it is completely non-negotiable. Are you OK with that?” He promised that he heard me and understood me and that everything was fine with him.

Six years later, Sam has legally adopted Hazel and we have a second child together, River (Mordechai Sholom). Our kids go to Chabad for Hebrew school and preschool, respectfully. We worship all the holidays. We don’t eat pork or shellfish. We talk about God a lot. We FaceTime our kids’ morahs, teachers, constantly with existential questions like, “Does Hashem eat M&Ms?” and, “Remind us again, who are the Maccabees?”

But my daughter’s favorite question is something she always asks me: “Mama, tell me something you did that was bad when you were a little girl?” My first thought is always: Good God, where do I begin? And that’s when I remember walking to synagogue in my stolen Chanels. It makes me want to cry remembering how sweet it all was.

Alyssa Shelasky, editor of New York Magazine’s Sex Diaries, is the author of the essay collection “This Might Be Too Personal: And Other Intimate Stories,” coming out May 17, 2022.