I'm Not a Mom or a Dad. I'm an Abi. – Kveller
Skip to Content Skip to Footer 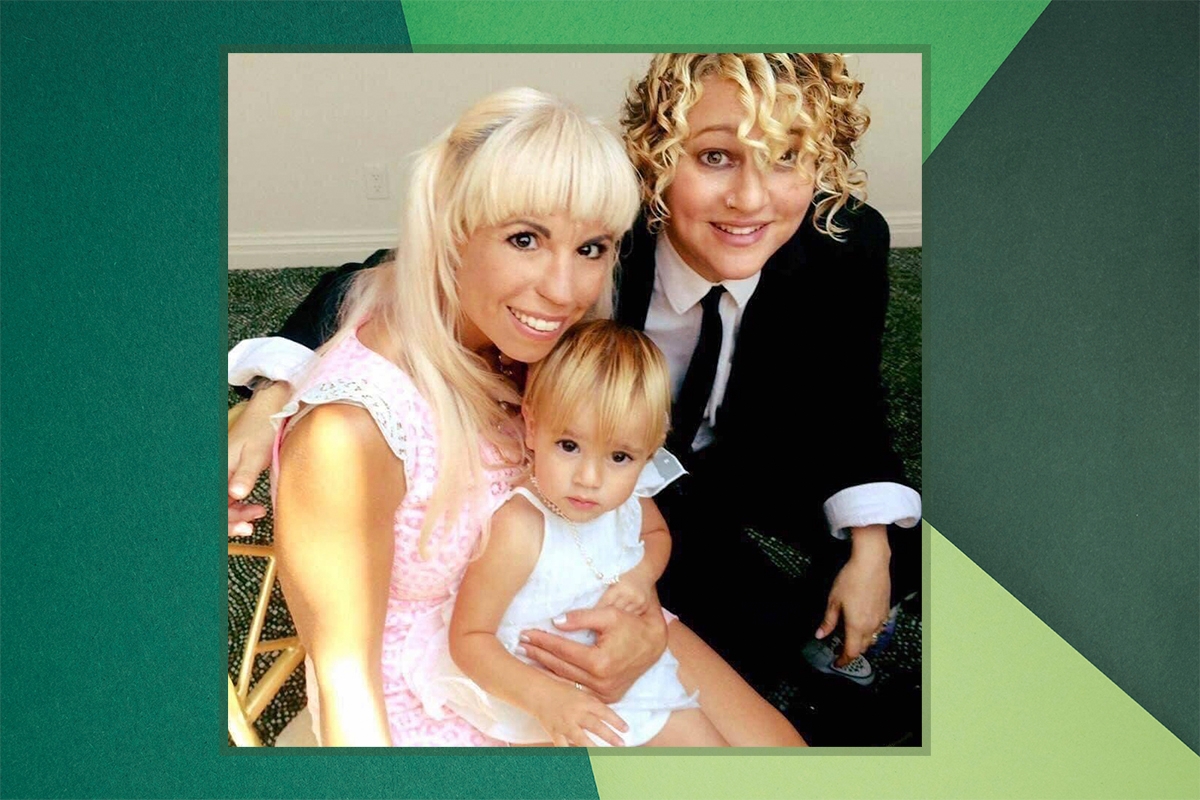 Sometimes, it seems like I’ve wanted a baby my whole life — at least since I was a child myself. But I never wanted to give birth. I never imagined myself pregnant, rubbing my belly and feeling a life grow inside me. Growing up, I just assumed I would adopt. Even before I understood that I was not a girl — I am nonbinary — I imagined myself holding a child that was mine but did not look like me.

My daughter, Aria, gave me the name Abi — adapted from Abba, the Hebrew word for father — when she was 2. My wife carried her for 10 months and I identify more like a neurotic Jewish dad steadily approaching middle age than a mother. Abi is the perfect name for me, and I remind Aria of this whenever she tells me that one of her friends is a bit confused about whether I am a mother or a father. “I am your Abi,” I say, by way of explanation. “I am your Abi because you gave me that name.”

When I met my wife 16 years ago, I fell in love with her because of her contradictions. She was a rockstar who reigned over NYC queer nightlife when the sun was down, but she would still visit me at work during the day and sing with my students. At the time I was the performing arts teacher at a kindergarten through 8th grade public school in Manhattan. When we were first dating, she would sometimes come straight from work and bring me iced coffee and peanut butter and banana smoothies. She could resolve any conflict between students just by kneeling down and holding them for a moment. Sometimes, I thought she could even make the wind blow and, of course, I was convinced she would be the most perfect mom.

“I don’t want to have children. I never have,” Jen told me one day.

We were on the beach in Mexico, watching the ocean. I was sharing how much I was looking forward to jumping in the waves with my child one day.

“I’m too selfish for them,” she continued.

My body went numb and my foot dug deep into the sand beside us. “Oh, I’m having children,” I said quietly.

For me, not having children and not loving Jen were not options. We did not bring it up again for many years. We needed time to live our own story. But when the topic of children finally came back up, I told her what I believed to be the truth: that not everyone was meant to be a parent, but she was. I knew this because of how alive she became when she saw the world through a child’s eyes. She was honest and unfiltered. She still believed in magic.

We moved in together, bought a van and adopted a puppy named Iggy Lou Stardust. Jen toured with her band. I continued teaching and freelancing as  a VJ and photographer. Ten years passed, we were still together and she  still did not want children. Sometimes we would sit up at night, on the roof of the bodega downstairs — which we considered our balcony — laughing and talking until the sun came out. She called me her twin star and I wanted to spend my days making her laugh like that.

“I can’t be with you if you don’t want to have a child with me,” I blurted out one evening, like an impatient child who couldn’t keep a secret any longer. Her brown eyes filled with tears and she nodded. “I know you can’t,” she said.

A few days later, Jen walked into our room and stood in front of me. I opened my arms and held her, quietly aware of how perfectly we fit.

“I want to have a baby because I want a baby with you,” she said.

That evening, I asked my mother for the diamond my grandma had left me when she passed and Jen’s father for his daughter’s hand in marriage. We had promised that we would not marry until same-sex marriage was legal in both California and New York, and now it was.

We exchanged vows next to our ocean. This time I felt free to imagine three of us building sand castles and diving into waves one day. As the chuppah ceremony began, we circled each other seven times — seven, to symbolize completion and holiness within time and space.

The miracle of reciprocal IVF gave us Aria, our precocious little human with her mature idealism and sense of justice, keen intuition and curiosity, contagious laugh and love for art and fashion. Reciprocal IVF is a process in which one partner goes through ovarian stimulation and their eggs are retrieved and fertilized with donor sperm. The resulting embryo is then transferred into the uterus of the other partner. Medically speaking, it’s the same process used when a person works with an egg donor, or when a couple works with a gestational carrier.

I have told Aria her conception or creation story countless times — most often beginning with Jen and me standing under a double rainbow in Hawaii, imagining her. We were on our honeymoon, searching for Buddhist monasteries and the kind of answers people look for in their early 30s. We stopped that day when we found the rainbows, one neatly framing the other and the ocean behind it. We must have sat there for hours.

Almost exactly one year after standing under that rainbow, Jen was pregnant. Whenever I tell this story, I like to revel in the fairytale of it all for a moment before explaining the impact of ovarian stimulation on a nonbinary person’s psyche.

The goal of ovarian stimulation is to harvest as many mature eggs as  possible from a woman’s ovaries. Harvesting many eggs maximizes the chances one of the eggs can be fertilized, implanted back into the uterus, and become a healthy baby.

I made eggs like a typical Aries tends to do all things — over the top. I made so many, in fact, that I looked like I was pregnant, and I had to have two back-to-back egg extractions to retrieve them all. Like many men who enjoy extra treats during their wives’ pregnancy, I gained 50 pounds that I still have not lost. All this would be fine if it were not for the unexpected cellular malfunction my brain experienced while injecting myself each day with estrogen.

The hormonal changes I experienced could be described as remarkable — at times, I felt like a completely different person. Jen found me crying hysterically one afternoon while watching videos featuring different species of lonely animals healed by interspecies friendships. Through my tears, I managed to express how beautiful I found their connection. Jen patted my back and explained that while the videos were, indeed, touching, I just might be responding to my increased estrogen levels.

At times, making our baby felt like baking a very complex cake, a cake with multiple layers for which we did not have the recipe. (Also, I am not very good at baking.) We also were forced to improvise since one of the main ingredients — sperm — was subsequently missing.

“So you and mommy were just missing one ingredient to make me?” Aria asked one day. She often returns to this conversation in the moments before she falls asleep. Our “missing ingredient” is a 6’4” Brazilian pro soccer player. For an additional price, we were able to read his essays, listen to his audio-recorded interview and see pictures of him as a young child to a tween, tan and smiling on the soccer field.

The night before Aria’s 6th birthday, she looked at Jen and me this way she does — like she’s reaching into our very souls. She’s been doing that since the moment she was born.

“So Mommy and Abi, did you know that you would have such an amazing kid before you had me?” She nestled her head against my chest and put her hand inside Jens’s hand, waiting patiently for a response. The three of us fit together perfectly.

“I could not have known, but you were the child we were meant to have,” Jen replied. Satisfied with this answer, Aria closed her eyes and drifted off to sleep.