This New Holocaust Education Law Matters Now More Than Ever 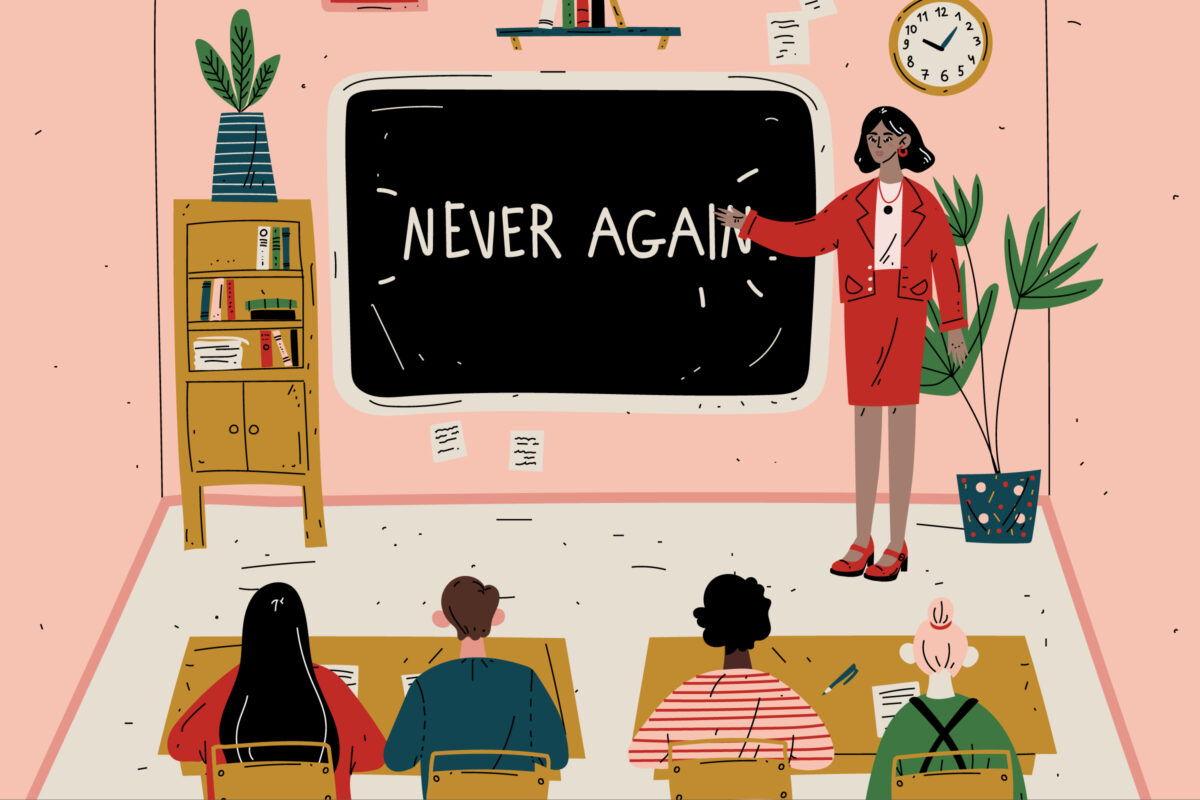 Good news is always welcome, and despite an onslaught of harrowing headlines, we got a dose of positivity on May 28 when President Trump signed into law a bipartisan bill that was supported by an overwhelming majority of Congress. The Never Again Education Act (NAEA) — passed by the House of Representatives in a 393-5 vote and approved in the Senate by unanimous consent — will fund Holocaust awareness programming in middle schools and high schools.

Holocaust education? You might be wondering: Why now? Why, amid a pandemic, unprecedented protests against racial injustice, crushing economic pressure, a national election, and deep political division?

Because when our gridlocked lawmaking system yields to near unanimity on the need for a law, there’s no better time to act.

Because focusing on coronavirus doesn’t mean we ignore other forms of contagion.

And because the lesson of the Holocaust — and the language of the NAEA — speak directly to the struggle against racism as well.

Studies show Holocaust awareness declining and anti-Jewish hate crimes are rising — not just in societies associated with anti-Semitism, but  in the United States, home to what we think of as the safest Diaspora community in history. More hate crimes in America target Jews than any other religious group. And from Pittsburgh to Poway, from Monsey to Jersey City, the attacks are deadlier than ever.

Anti-Semitism is itself a virus. In country after country, century after century, the Jewish people have been subjected to discrimination, forced conversion, expulsion and mass murder. The disease crests and wanes but never disappears. Democracy and education are proven factors in mitigating its spread and virulence but, like ventilators and PPE’s, there is sometimes more demand than supply.

When the bubonic plague swept Europe in the 14th century, thousands were massacred in anti-Semitic attacks ignited by conspiracy theories blaming Jews for the pandemic. We hear similar claims from hate groups and individuals today — that Jews or Israel, George Soros or the Rothschilds, are behind coronavirus, either to assert their supremacy or later save the world with a vaccine. These libels are less deadly than in medieval times but amplified and spread by today’s communication tools.

Fortunately, America is still a place where the vast majority of citizens and leaders stand with the Jewish people. We not only have the freedom to defend ourselves, our neighbors protect us, as well. The vast majority also consider hate — against Jews or anyone else — everybody’s problem. They understand that tolerance and inclusion are not red or blue issues but values for all.

The new law enables the United States Holocaust Memorial Museum (itself chartered by an Act of Congress) to expand its training and programming for teachers across the country by developing and disseminating materials designed to foster understanding of the Holocaust, educate students on its history and on the urgency of opposing hate, bigotry, and genocide against any group. The measure provides $10 million in funding over the next five years and calls for the museum’s director to engage “with State and local education leaders to encourage the adoption of resources supported under this Act into curricula across diverse disciplines.”

From the start, the NAEA has been a signature goal of Hadassah, the Women’s Zionist Organization of America. Holocaust education is an expression of our stake in the fight against ignorance that allows anti-Semitism and all forms of hate to grow. The lesson of the Holocaust is part of the larger pursuit of equality and justice. Hadassah stands today with people across the United States in condemning the murders of George Floyd, Ahmaud Arbery, and Breonna Taylor, and in solidarity with communities of Color — and all those from other communities — in denouncing instances of police brutality and opposing systemic racism.

Seventy-five years after the end of World War II, the number of living Holocaust survivors is dwindling. If “Never Again” is to mean anything, now is the time to deploy our democratic institutions and educational vision to promote our highest ideals and curb humanity’s basest instincts. The passage of the NAEA is a clear demonstration that America will not allow memory of the Holocaust to fade and that our political leadership, across the country and across the board, stands behind the effort.

Times of great stress threaten diverse immune systems — of body and soul, of polity and economy. For America to maintain itself as a healthy society with informed citizens, Holocaust education is a key prescription. The NAEA has become law at the time when —as virtually all in Washington agree — it is needed most.