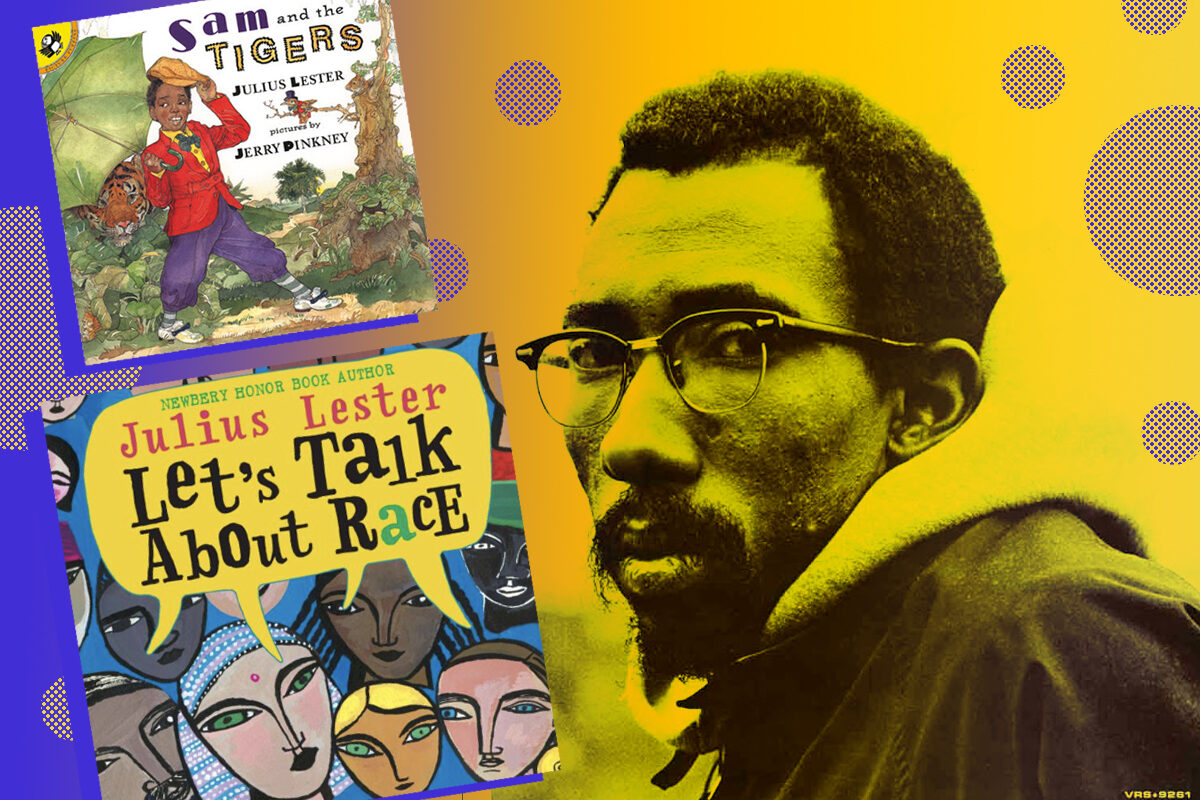 Do you know about Julius Lester? Well, if you don’t, it’s time you do — and it’s time your children do, too. As this country is aflame again — this time in the middle of a pandemic — because of the violence done against Black bodies in America, both by the police and by racist individuals, we need to elevate Black voices more than ever.

A professor at the University of Massachusetts – Amherst for more than 30 years, Julius Lester was an important Black Jew. He was part of the Black Power movement; a celebrated author of over 40 books for children, teens, and adults; he was also a Jewish religious lay leader for more than a decade.

Lester was born the son of a minister from St. Louis, Missouri in 1939, and grew up in Kansas City and Nashville during Jim Crow. He later went moved to New York where he performed as a folk singer and became involved in the Student Nonviolent Coordinating Committee, as the head of its photography department. As part of the SNCC, he went to the South to document the civil rights movement.

Lester began writing children’s books in the late 1960s; his first book was 1968’s To Be A Slave, a non-fiction book that used the actual words of slaves to tell the story of slavery. He went on to create dozens more books — any of them award-winning adaptations of African American Folklore, and tales about African American history and slavery, including the story of an African American cowboy who was born a slave, and Sam and the Tiger, a non-racist retelling of “Little Black Sambo.”

While the struggle for civil rights informed so much of his writing, Lester was also passionate about his religion. When he discovered that his great-grandfather was a German Jewish immigrant, he felt emotionally drawn to Judaism. In 1981, he had a vision: “In the vision, I was a Jew,” he told NPR in 1995. “There was a yarmulke on my head, and I was dancing, and I was filled with incredible joy.”

Lester converted to Judaism in 1982. His Hebrew name was Yaakov Daniel ben Avraham v’Sarah. Between 1991 and 2001, he was a religious lay leader at  Beth El Synagogue in St. Johnsbury, Vermont, where the former folk singer was admired for his great voice.

One of his later children’s books is called Let’s Talk About Race. Published in 2005, it’s a must-read for parents and children alike. It’s told in a personal and lovely way, with Lester telling us his own story: where he was born, what he loves to do, and that he is Jewish and that he is Black. (“There’s something else that’s a part of my story,” he writes. “It’s part of yours, too. That’s what race we are. I’m Black. What race are you?”)

In the book, he reminds us each person has a story, and that we are all the same skeleton underneath. Yes, the statement can feel a bit trite today, but with the haunting beautiful illustrations of Karen Barbour, and told with a plain and friendly voice like Lester’s, it has poetry.

As parents, it’s essential to teach our kids that the Jewish community is diverse — especially if that’s not what they see. And there’s a difference between dismantling and examining personal racism — which this book aims to help do, by encouraging our kids to view people of color as humans with their own stories — and fighting systemic racism and oppression, which this specific book does not address.

It’s also important to say that someone’s race and culture is a valuable and beautiful part of their heritage — there are great books for that, too. (Like one of these 18 diverse Jewish children’s books.)

It is important that Julius Lester was black. It is important that he was Jewish, too. And it is important that he lived as a human who was both these things in the reality that is modern-day America. But Lester, who died in 2018, was also a unique and contrarian voice — one that is hard to put on a pedestal. He defended Rachel Dolezal and hated Hanukkah. He wrote award-winning books that captivated a whole generation, but we shouldn’t pigeonhole him — he would loathe that.

So, read this book your kids. (And if you’re looking for more, you can do this  great activity from Be’chol Lashon alongside it.) But don’t think reading one (fabulous!) book is enough: Teach them about the power of protest and resistance, and about the ills of systemic racism, with books like the ones in this great list, and expose them to the works of other Black Jews, like Ezra’s BIG Shabbat Questions, a  new children’s book by Kveller writer Aviva Brown.

Lester was a powerful voice, but let’s make sure he is not the only Jew of Color in our kids’ lives. While Lester tells many, many great stories, listening to only one voice — be it in books or in real life — is simply not enough.