My Son Didn't Have a Jewish Grandparent, So I Adopted One – Kveller
Skip to Content Skip to Footer

My Son Didn’t Have a Jewish Grandparent, So I Adopted One 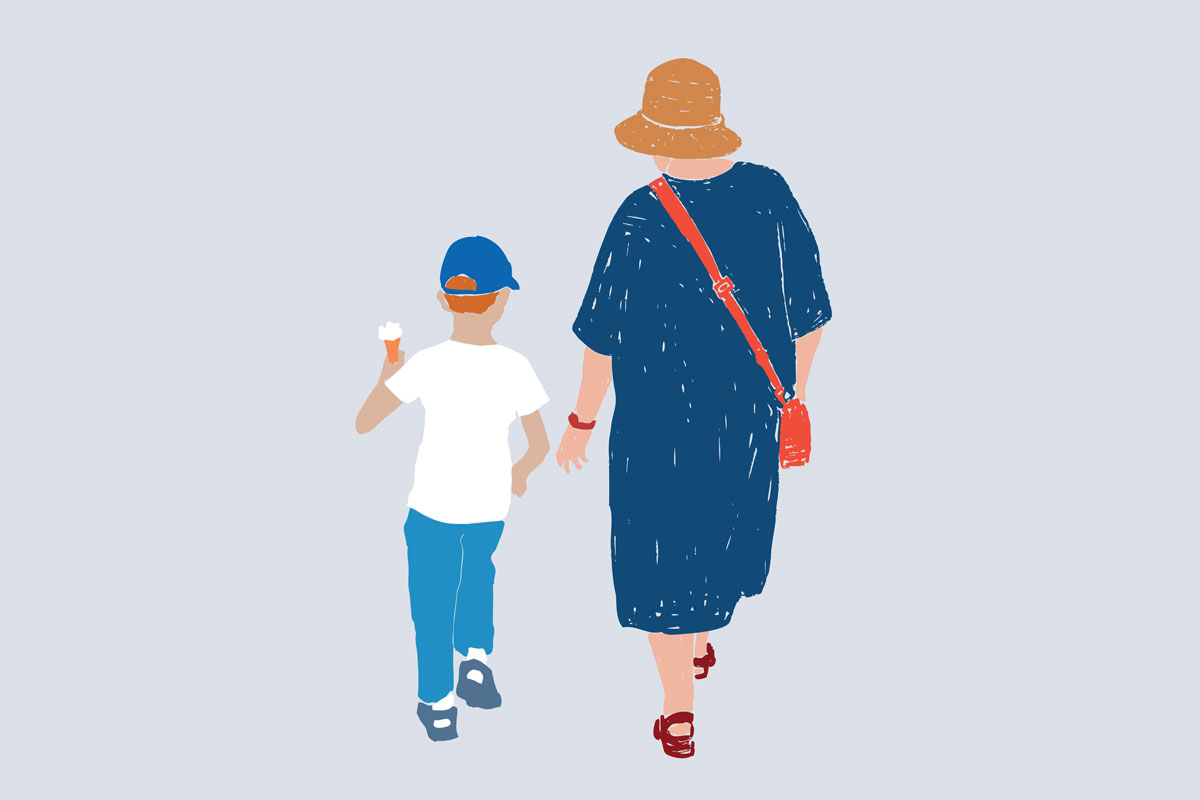 Jewish life and culture are centralized around family structure, from milestones to holidays to gatherings and community programming. It’s a part of Jewish life I have always loved and found beautiful — but that has always been bittersweet for me, because I wasn’t born into a safe, functional family.

I’m a single parent and after my son was born, despite my tireless efforts to prove otherwise, it gradually became apparent that my son and I couldn’t have a safe or stable life if I remained in contact with my biological family (except, thankfully, my brothers, to whom I am extremely close, along with their wives and children). I’ve never doubted for even a moment that I made the right choice in cutting contact with my biological family, but it was (and still is) a heartbreaking experience: My heart was broken not only for my own loss of not having parents and grandparents in my life, but also for my son, who would grow up without any grandparents at all.

There I was with my then-6-year-old, and I began to wonder, “If there are people like us out here wishing we had grandparents, then there must also be people out there wishing they were grandparents but without grandkids.” Influencing this brainstorm was the fact that we had “adopted” a beloved friend to be my son’s auntie, from when he was still in utero. (My son was named after her father to carry on his legacy; he was a Holocaust survivor who risked his life to help other prisoners in the camps.) We already had the model of “adopting” non-biological family members; I just had to figure out how to apply it to grandparents.

I researched everywhere and racked my brains for ideas over many sleepless nights of creative-thinking insomnia. It turns out, there’s a dearth of resources for families in my situation, though I did stumble across a Facebook group of “surrogate grandparents,” in which people could post their state and details about themselves in order to connect with someone in their area (used by both parents looking for grandparents for their kids, and older people wishing for grandkids).

It’s amazing that something like this exists, but there were two problems: Firstly, there didn’t seem to be anyone looking for surrogate grandkids in my area. Secondly, I was wary of the idea of bringing a total stranger into our lives. Even though I would never leave my son unsupervised with someone I didn’t know, what if he got attached but they weren’t reliable and just completely disappeared one day? What if they brought more chaos back into our lives again?

I reflected back to the feeling of the Jewish community, where I have always worked, and utilized resources and advice from fellow Jewish moms. The Jewish community has a safe familiarity to me: It’s much smaller than the big scary world at large, and much easier to get a feel for someone, since everyone is at least somewhat connected (everyone you know knows at least five other people you know in some way or another, or are distantly related, or went to camp with each other’s nephews — you get the idea).

Fortunately for me, I had a great working relationship with my then-supervisor at my synagogue job. I felt safe asking her awkwardly in a personal email one day something along the lines of, “Hey, this is super random and probably really weird. But I am sad my son doesn’t have grandparents, and I really want to find him role models who could fill that hole in his life. Do you know anyone in our synagogue community who might fit that description, maybe who never got to have their own children but had wanted to? Disregard if this is too crazy and out there, just figured I would ask!” It was an uncomfortable ask, not because I feared my then-supervisor would be anything but supportive (she was), but because I was pioneering something outside the social norm, and it was really a leap outside my comfort zone.

My supervisor was immensely receptive and came up with some names of people for me to reach out to, telling me a little about them. One name stood out: She is a woman in our community in her 60s, who happened to have had a few interactions with my son in passing since we’d arrived at the synagogue. On a synagogue retreat, she had found my then 5-year-old’s happy childish chatter delightful and had enjoyed standing next to him when we all held hands in a giant circle for Havdalah outside. She had been a guest at the Jewish Sunday school program I run, arriving early and entertaining my son by getting down on the floor and playing with the Hot Wheels he had brought with him, crawling around the floor with him to drive them. My son instantly took to her in a way he doesn’t with just anyone.

My supervisor helped make the “grandparent” connection between us — and it was a shidduch (match) straight from heaven. My son needed a role model like her. She, in turn, shared with me that she had always wanted to have children, but was discouraged when she was younger from having children on her own as a single woman in the LGBTQ community. Getting to have this connection to my son has been incredibly meaningful for her, as well.

Jewish culture and community is so fundamentally structured around family that those who don’t fit that “traditional” family structure often fall through the cracks. Whether they never got married or never had any children of their own (by choice or by circumstance), whether they grew up in an era in which it was extremely difficult, if not impossible, to have a “traditional” family if you were gay (still a relevant issue today), or whether they’ve had to cut all ties to their biological family for their own wellbeing, there are people in our community who feel that we are missing out on a big part of Jewish culture. I’d like to challenge all Jewish leadership to find creative ways to introduce the model of found-family through community and/or synagogue programs. My hope is that some day, every Jewish community will have introduced a permanent structure that not only naturally integrates these marginalized individuals, but also finds ways to connect them with each other to create real, long-term found families.

Since our relationship with my son’s adopted grandma began, we’ve been apple picking for Rosh Hashanah together, celebrated Mother’s Day with her by making tie dye shirts in her backyard and celebrated my son’s birthdays with her — amongst many other adventures. In every interaction with my son, she makes sure he knows how special, loved and valuable he is. Though we were careful not to rush or pressure things for either of them in the beginning, now my son always refers to her as his adopted grandma to anyone who asks, and she calls him her grandson. We both absolutely adore his adopted Jewish grandma.

So is this chapter closed for us? Not exactly: Last year, I told my son’s adopted grandma that I wanted to “adopt” a male role model for him from the gay community, and asked if she knew anyone in our congregation who might be a good fit. That’s how we met our newest found family member, who is something of a Big Brother role model to my son, and who is also incredibly close to his adopted grandma. And it won’t stop there. I still tell my son regularly that I hope our family will only grow bigger and bigger.